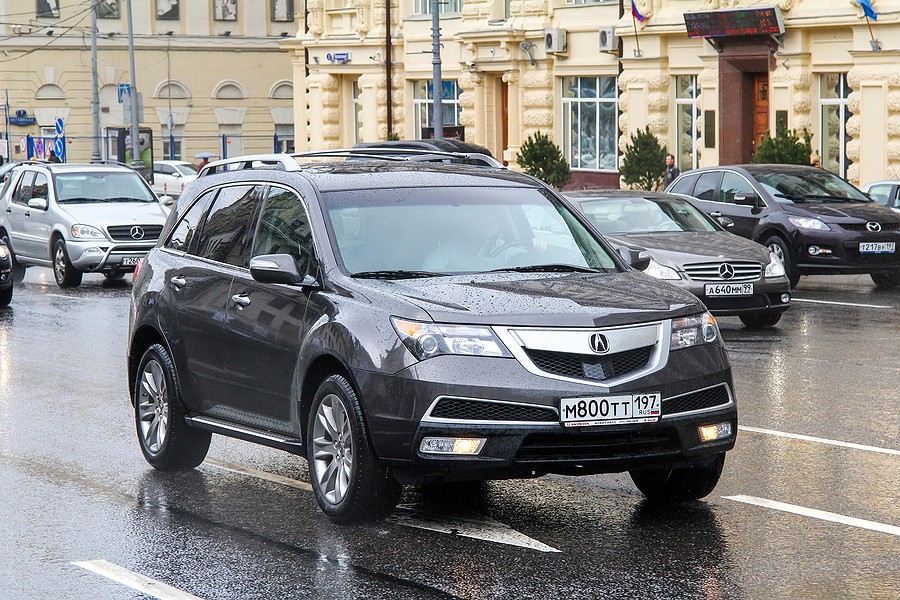 The Acura MDX is actually a Honda, as Acura is the luxury nameplate that Honda has been manufacturing vehicles under since the year 2000. The MDX part of the name stands for multi-dimensional luxury and it's one of the best-selling luxury cars in the United States. Although the Acura MDX has enjoyed popularity for the last 20 years that's not to say it hasn't been without its problems and it does require some routine maintenance to keep it running smoothly and efficiently. With that in mind, when it comes time to replace your timing belt, here are the timing belt replacement costs for the Acura MDX you need to know about.

While some models of Acuras have timing chains, the Acura MDX is equipped with a V6 engine and will exclusively use a timing belt for engine timing. Normally, replacing a timing belt is a fairly costly repair job if you get it done by a mechanic, and even more expensive if you do it at a dealership. Because the Acura MDX is a higher-end model than many cars on the road, it will typically cost you a little more to get your timing belt replaced.

On average you can expect a timing belt replacement in an Acura MDX to be anywhere between about $700 and $1,100. The belt alone on a site like Autozone.com is likely to cost you between about $30 and $200. The rest of the costs are related to labour because it is a fairly intensive job to access the timing belt inside your engine. It's going to take your mechanic a few hours to get in there as they will need to remove several parts to access the timing belt to have it removed. It's possible to remove and replace a timing belt yourself, but you do need to be comfortable working under the hood of your car and it's definitely not a beginner repair job if you've never done any work on your own engine before.

Even though the timing belt is just a simple rubber-like composite belt it's extremely important to the functioning of your engine.  Unlike a serpentine belt which is smooth on both sides, your timing belt has notched teeth on the inside that allow it to grip the gears when it is looped over the ends of both your camshaft and your crankshaft.

If the timing belt is not working the way it's supposed to then the camshaft and the crankshaft will be misaligned. If it's just starting to wear out, perhaps the teeth are wearing down or the belt has been stretched out, then it will throw off the timing of your engine. That can cause things like engine misfires and excessive fuel consumption while leading to overall poor performance.

If the timing belt in your engine breaks it can lead to severe and extremely expensive damage. Without a properly functioning timing belt the camshaft will stop rotating but the crankshaft will not. As the pistons rise in the cylinder, the valves will not be able to open to accommodate them. That means the pistons will crash into the closed valves damaging both of them as well as the cylinder heads. This can effectively destroy your engine and if it's bad enough you may need a full engine repair or replacement which can cost you upwards of $4,000 to $5,000 or more.

For that reason, you always want to make sure you are replacing your timing belt according to the calendar of scheduled maintenance for your Acura MDX.

Do Acura MDXs Have Problems with Their Timing Belts?

Although the Acura MDX is typically a reliable vehicle, in 2019 Honda and Acura recalled 94,000 vehicles for problems with the timing belt. This didn't affect just the MDX model but the 2018 and 2019 MDX was affected by the recall. Under this particular recall, the teeth of the affected timing belts had the potential to separate from the belt itself causing it to malfunction. This could lead to serious engine damage and your engine stalling, which of course increases the crash risk if it happened while the vehicle was in motion. The problem originated as a result of a production mold that did not allow the rubber to vulcanize and harden the way it was supposed to.

There have been isolated problems with timing belts reported to the National Highway Transportation and Safety Administration across a range of MDX years. In particular, the 2008 Acura MDX was known to have timing belt problems relating to the belt breaking earlier than it should have. Still, this was not a massively widespread problem that every driver of the 2008 Acura MDX faced by any means.

In general, timing belt problems for the Acura MDX are no more prevalent than they are for any other car on the road. Which is to say of course problems could pop up, but the vehicle is not prone to them. This is of course aside from the recall that affected 2018 to 2019 models.

Acura recommends changing your timing belts every 60,000 miles to 90,000 miles. Obviously, that's a pretty big range and your best bet is to check with your owner's manual to find out what the company recommended for your specific model year. It's always possible that a timing belt could last much longer than that 60000 miles to 90,000-mile range, but it's never recommended to exceed what's been recommended by the manufacturer. Just because it could last longer, and there are plenty of anecdotal stories of timing belts lasting up to 200,000 miles or more, doesn't mean that your timing belt is going to last that long. In fact, that's extremely rare. The longer you let your timing belt go without having it replaced, the more likely it is to break on you suddenly at a very inconvenient time. And considering how expensive it could be to repair the damage to your engine caused by a broken timing belt, it's definitely not worth leaving this one up to chance.

When your timing belt is beginning to fail there are a few signs that you could be on the lookout for to let you know something is going wrong. The moment you notice these, it's best to get your car to a mechanic as soon as possible to avoid any more serious and costly damages.

Because the timing belt is crucial for maintaining the proper timing of your engine, when the teeth begin to wear off or the belt itself begins to stretch out, the timing is going to suffer as a result. If it gets bad enough your engine is going to misfire because the combustion reaction will be able to take place at the exact time that it needs to. This can lead to engine damage as well as engine stalling, and potentially even accidents.

A failing timing belt produces a distinctive clicking sound that is hard to mistake for any other problems in your vehicle. It's very fast paced and reminiscent of the sound of a swiftly rotating roulette wheel. You may also notice a squealing sound but that is more typically associated with a smooth belt like the serpentine belt. Unlike the ticking sound which will be constant, the squealing sound is more likely to be intermittent.

Your timing belt has a timing case that covers it secured by bolts. If these bolts begin to come loose, they can cause oil to leak out which could contaminate your engine bay and be visible on the ground below where your car has been parked. It's also possible that the oil could get on the timing belt itself which could cause it to weaken or slip loose.

If you're noticing that your car is shuddering or vibrating excessively even when you are simply parked with the engine running, this could also be caused by a problem with your timing belt being misaligned or wearing out.