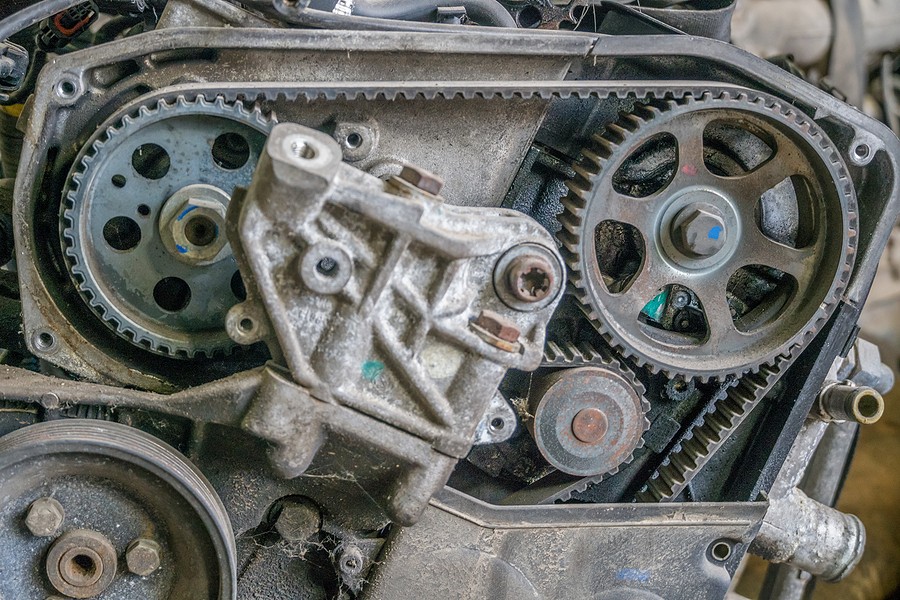 A combustion engine relies on very precise timing for it to work. Consider all the moving parts in your engine and how they work together. You have a piston rising in a cylinder. You have a valve that has to open to accommodate it as it rises. You have fuel injectors spraying a fuel and air mixture into the chamber at the exact right time for the spark plugs to ignite it and cause an explosion which pushes the piston back down again. That has to happen across every cylinder of your engine literally thousands of times per minute. In fact, in a 4-cylinder engine your spark plugs are going to spark 12,000 times every minute. The timing belt ensures that all of this happens exactly when it needs to.

If you have a new car, or if you just had a new timing belt installed in an old one, the sound you should be hearing when you are driving is relative silence. You'll hear the normal hum of any engine, but the timing belt itself should run entirely silently. If you hear something that's like a bit of a high-pitch whining sound, it may be a new tensioner giving you trouble. That's just because it needs to be worked in a little.  If this happens at all, and that is a rare case to begin with, but if it does happen it should fade away pretty quickly within a few days worth of driving. If it doesn't, you may want to get your engine looked at. The bottom line is that a brand-new timing belt should not be producing any sound that you'll notice when you're driving. And that's how you know if there is a problem with your timing belt because the sounds it makes only happen when something is wrong.

How Do You Fix a Timing Belt Sound?

When your timing belt starts making these noises you have one option to fix it. You need to replace your timing belt. When your timing belt starts making a ticking sound it's not because it's simply misaligned, it's because the teeth that are on the inside of the belt which allow its to grip the pulleys at the end of your camshaft and crankshaft are either wearing down or breaking off entirely. Since it rotates at such a very high rate of speed, when these teeth aren't clicking in properly along the pulleys, you're going to hear that distinctive ticking noise.

Additionally, you may also notice a squealing sound. Usually when you hear a squealing sound from your engine it's a drive belt that's causing it to happen, and particularly your serpentine belt. That belt is smooth, it has no teeth on the inside track.  That's why a squealing is more usually associated with this belt. When it's wearing out or something's overheating the squealing sound is what you'll hear however it is possible that your timing belt could make that same noise. If that's the case it will most likely be happening as you are accelerating in your vehicle. The ticking sound is typically a sound that you'll notice all the time while your engine is running regardless of whether you are speeding up, slowing down, or even just idling.

As we said, if you want to fix this problem, you’re going to need to replace your timing belt. Timing belt replacement is often a very costly and time-consuming job. Depending on the make and model of your vehicle at timing belt repair could end up costing you between $500 and $2,000. That high number is definitely on the rarer side of things and tends to be for high-end vehicles, but it's not outside the realm of possibility.

One other thing to be aware of is that if your timing belt isn't that old, which is to say it has been replaced within the last 60,000 miles, then you may have another problem that you need to look at. Most timing belts need to be replaced between 60,000 miles and 130,000 miles. Your best bet is to check your owner's manual to find out for sure. But if your belt has been replaced more recently than that and it should still be working, then you may have a problem with your timing tensioner rather than the belt itself. As the name suggests, the timing tensioner is what helps keep your timing belt tightly wound around those pulleys that it rotates between. When the timing tensioner goes bad, the sound is often the squeal that we mentioned earlier or sometimes even a rattling sound. It'll be different from the ticking sound however, which is exclusively caused by those teeth wearing down that we mentioned.

A bad timing tensioner will mean that your timing belt is not able to maintain the precise timing that your engine requires and you'll get all the symptoms of a bad timing belt, even though your timing belt is still working properly. Regardless of whether or not it's the tensioner or the belt itself, a mechanic is going to need to inspect the area and determine for sure which one it is that's failing and will need to be fixed. Replacing a timing belt tensioner may cost you anywhere between $350 and $500.

What Are the Signs of a Bad Timing Belt?

Aside from noises there are some other signs that you can be on the lookout for to let you know that you're having a problem with your timing belt. If you're experiencing a noise as well as any of these symptoms, then there's a good chance you have a bad timing belt and you should get it checked out as soon as you can.

Engine Misfires:  As we've seen, your engine has to fire at a very precise time for everything to work properly. If the timing gets misaligned then your spark won't be happening exactly when it needs to, and you're going to get a misfire in one or more cylinders. This will likely happen fairly frequently until such time as you get the timing belt fixed. Engine misfires can cause a significant reduction in overall power from your engine and reduce the performance accordingly.

Rough Idling: If you're experiencing rough idling and your vehicle seems to struggle and stutter even when you're just sitting still and not putting any stress on the engine, that could be an indication of a timing belt issue as well. As the belt slips away from the gears, the teeth could wear off and get stuck in the gears. This will cause your engine to jolt and shake on you.

Bad Oil Pressure: When your belt begins to wear down and pieces start to break off, if they don't get stuck in the gears causing the misfires and idling issues we mention, they can fall right down into your oil pan. When they clog up your oil pan is going to reduce your oil pressure overall, which can also cause your engine to overheat.

Engine Won't Turn Over: Although there are many reasons that you could end up having your engine not turning over, your timing belt can also play a part in this happening as well. If your timing belt has snapped, you will not be able to get your engine to start at all because the parts within it are no longer able to move together. This can't happen on Startup sometimes with a weak timing belt that, at the moment you press the ignition button or turn the key, the strain of trying to turn the engine over causes an already damaged timing belt to break. This will actually save you some serious damage in the long run because your engine isn't already running when it happens, so you won't be subject to that catastrophic engine failure and massive repair bills.

Can You Drive with a Bad Timing Belt?

If you're noticing that your timing belt is making a bad ticking sound or that you're experiencing any kind of squealing sound, then your timing belt is definitely on its last legs. While you could technically continue driving in a very literal sense, it's an extremely bad idea to do so. You'll be able to drive with a bad timing belt right up until you can't.

What we mean by that is that your timing belt will continue to weaken and crack until it finally breaks. The moment your timing belt breaks your engine will shut down, often in a very catastrophically bad way. Depending on the kind of engine you have, and unfortunately most engines work this way, when your timing belt breaks your camshaft will stop rotating. However, your crankshaft will not. As it spins the pistons will rise and crash into the valves which are no longer able to open to accommodate them. This is what happens in what is known as an interference engine. The pistons interfere with the valves, but the valves should be open to allow it to happen. When the valves aren't open, the two collide and you're going to seriously damage both parts as well as the cylinders themselves.

The damage caused by a broken timing belt could be severe enough to require an entire engine repair or even a replacement. You're looking at a repair cost that can stretch to $4,000, $5,000 or even more. If you realize your timing belt is bad, you need to get it fixed as soon as you can to avoid these very high repair bills.

Many modern vehicles use timing chains rather than timing belts these days. In fact, most vehicles made within the last 5 years or so are likely to use a chain instead of a belt. That doesn't mean every vehicle does however and it's in your best interest to check and see in your owner's manual if you're not sure.

If you do still have a timing belt in your vehicle either because it's an older model, or it's a newer model that still makes use of them which some performance vehicles do, then you need to make sure you're keeping up with a schedule of routine maintenance for it. Check your manual to find out how long your timing belt is supposed to last. As we've said, some need to be changed every 60,000 miles, some can last up to a hundred thirty thousand miles. There are even rumours of timing belts lasting as much as 200,000 miles but that's definitely a rarity and not something that you should be striving to accomplish.

When you start noticing the sounds that your timing belt is making then you definitely want to make sure you're getting in to see a mechanic as soon as you can. A timing belt should never be making noise when it's working properly. So, it is something of a blessing if you do hear the ticking or squealing because it's an early warning that you have time to get something fixed before a bad problem gets much worse. Just don't let it go for too long because if a timing belt fails while you're driving there is literally no time to adapt to the situation. The moment that a timing belt breaks when a car is in motion the engine will cease functioning right away. If you are driving down the highway at a high rate of speed, you could be in a seriously dangerous situation if this happens. Don't leave it up to chance, get it to a mechanic when you hear those sounds.