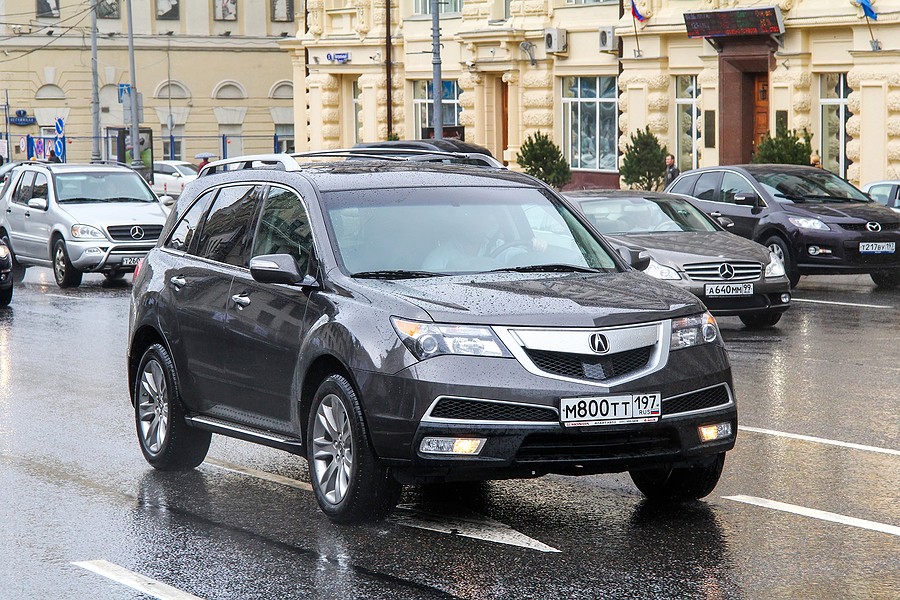 This was the first crossover SUV to have third-row seating and share a platform with the similar Honda Pilot. This car seats eight, while the MDX seats just one less, with two seating positions in the third row. The MDX was first introduced as a 2001 model, replacing the Isuzu Trooper.

The Acura MDX has the overall worst problem category of the transmission category, with the 2003 model having the most overall complaints and being the worst rated model due to the prevalence of issues, the onset of the problems, and the price it takes to fix the issues. The most reported problem in this 2003 Acura involves the transmission failure which is a very costly repair.

The main category of concern for the Acura MDX in the 2001 model is the transmission for the users and NHTSA, who lodged early 90 complaints in this category. The top user problems deal with transmission failure, the transmission jerking, the torque converter and the column shift. The transmission shift has a typical repair cost of around $4,800 and occurs at around 137,000 miles, with the most common solution being complete transmission replacement.

The top categories of concern regarding this year were also the transmission along with the engine, with this model year having more issues than the previous two years. The 2003 Acura also had substantial NHTSA complaints regarding the seat belts and the air bags. The top concerns regarding the transmission deal with the transmission failure, the torque converter failure, and the reverse gear locking out. The typical repair cost comes in at around $4,000, with the most common solution being to replace the ranking occurring at around 125,000 miles.

The top concerns from the NHTSA in the seatbelts and airbags category involve the seat belt shortening out, the SRS Failing to deploy if the seatbelt is unbuckled, air bag issues, and the front buckle assembly. These issues have resulted in 2 crashes, 1 fire, 4 injuries, occur at around 39,000 miles, and have users stating that the air bag lights turn on and the air bags might not deploy during a crash.

The top concerns in the interior accessories involve the leather seats cracking, the door lock not working, and the blower adjusters breaking.

The 2006 also had transmission problems, but had much fewer problems than any of the previous model years, with there just being relatively few complaints regarding the transmission that occurred at around 141,000 miles.

The main air conditioning problems focus on the AC not working properly, with the typical repair cost coming out to around $460 and occurring at around 132,000 miles, with the most user complaints focusing on the high pressure line replacement.

The 2009 MDX had more issues than the previous year, with the main category of complaints focusing on the interior accessories and the electrical system. The interior accessories issues focus on the sat nav unit malfunctioning, the Bluetooth draining the battery, the dye coming off of the leather seats, and the short-in audio system. The typical repair time to fix the sat nav malfunction is around 59,000 miles, with the users stating that they typically have to repair and replace the sat nav unit.

The second category that had the most complaints in the Acura MDX focused on the electrical system, with some minor issues of the battery going dead and the replaced battery light frequently turning on during use. Although this problem is not extremely severe, it is annoying and can cause you to spend some extra money on battery repairs.

The 2014 Acura MDX had more problems than all of the previous years, with the highest problem category involving the engine, the body and paint, and the brakes. The highest category for NHTSA complaints focus on the engine, the steering, and the electrical system. The top complaints regarding the engine focus on the car lurching or stalling when the car accelerates, the engine noise occurring, a ticking noise coming from the engine, unusual noises at rough idle, and a vibrating whistling engine noise. The problem of the engine stalling or lurching occurs at around 29,000 miles and has users stating that the vehicle hesitates at acceleration.

The body and paint problems prevalent in the 2014 Acura MDX involve the paint issues and the misaligned doors, with the most usual problems coming in at around 34,000 miles and users stating that the water can come into the windshield, the paint bubbles on the roof between the windshield and the sunroof, and there is corrosion forming on the bottom of one of the doors.

Along with the engine and the body and paint issues, the brakes have also caused some NHTSA concerns and user complaints, with the most common issues dealing with the rotors warping, the service brakes causing issues, and the electronic stability control having some problems. The typical repair cost comes in at around $300 to fix the rotors warping and occurs at an average of around 17,000 miles.

The 2015 Acura had much fewer problems than the 2014 year, with the 2015 being one of the best in terms of the prevalence of user issues. The main category of complaint focused on the transmission, with users stating that the transmission doesn't shift properly and makes a humming noise, costing around $90 to fix and occurring at an average of around 43,000 miles.

The 2019 Acura MDX earned the #7 spot in the Luxury Midsize SUVs 2019 category and earned the #9 in Used Luxury Midsize SUVs $30K to $40K category. The pros of the 2019 Acura involve the sample technical features, the good gas mileage and fuel economy, and the composed and smooth handling. The cons of the 2019 Acura MDX include the competition interiors feeling more luxurious, the ride not being as smooth as some other rivals, and the subpar predicted reliability rating.

The Car US News Scorecard for the 2019 Acura MDX involve the 9.5 from critics’ rating, the 8.2 performance rating, the 7.7 interior rating, the 7.8 cost of ownership, and the 9.8 safety rating out of 10 with the JD Power Reliability rating coming out to around 2.5 out of 5 stars.

The pros of the Acura MDX focus on the robust engine and the engine performance, the excellent fuel economy estimates and miles per gallon, and the smooth handling. The cons of the Acura MDX involve the rivals and competitors having more luxurious and nicer cabins, with no real changes occurring for the 2020 model year.

The Acura MDX included various recalls throughout each year of production, with the model earning 35 recalls for the entire lifespan of the vehicle. One of the earlier recalls was in 2008 and dealt with the mechanical equipment, the carrier and rack. Over 2,000 Acura MDX cars had to be recalled as the pinch bolt between the bike arm bracket and the upright assembly of the hitch style bicycle rack was faulty. When moving the bike arm bracket to the down position, this pinch bolt could cause severe laceration or damage to the user’s fingertips or hand.

A middle of the road recall that dealt with the 2005-2006 Acura MDX vehicles dealt with the service brakes and the anti lock, traction control, and electronic limited slip mechanism, and was released in 2013. An electrical capacitor might be damaged during the manufacturing of the vehicle stability assist motor module, resulting in brake application. However, if the driver applies the brakes while the VSA is not working correctly, the vehicle can come to an abrupt stop. Sudden inadvertent braking can cause the increase of a risk of a crash.

One of the more modern recalls deals with the exterior lighting and the tail lights, with the recall date occurring in 2019 and resulting in affecting various 2014-2019 models. Msotirue could enter the tailgate lid lights, causing a loss of the lights and reducing the visibility.