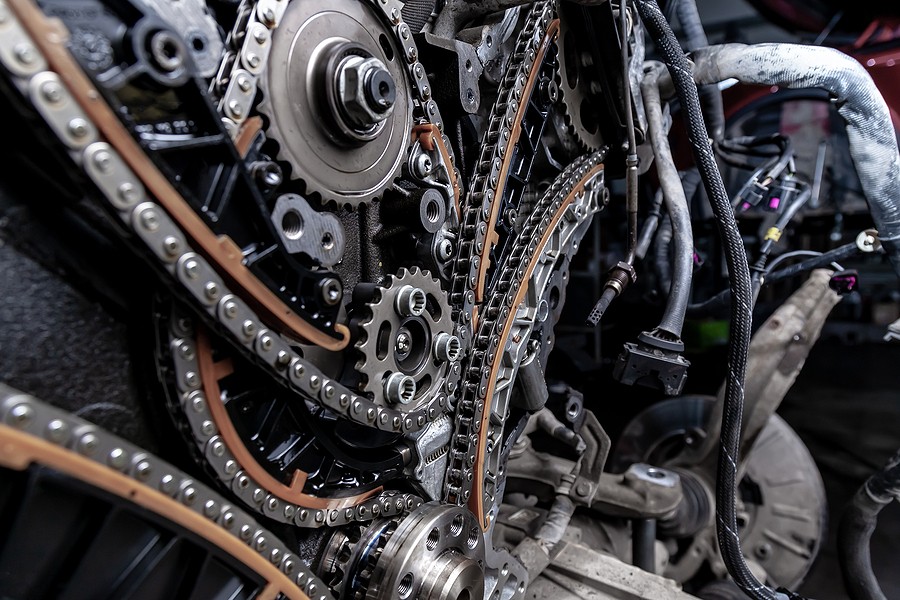 Timing belts and timing chains perform the same function in your car. They're extremely important to the proper functioning of your engine so much so that if your timing belts were to break while driving not only would your car stop running, it would also cause catastrophic damage to the engine. You can't really overstate just how important a timing belt is to the proper functioning of a vehicle.

Despite how important a timing chain or a timing belt is, not every driver is even aware of what these parts of their vehicle do, or where they are located. Even though a timing belt and a timing chain do essentially the same job, they are by no means interchangeable and you can't swap one for another in the same vehicle. As well, manufacturers and mechanics are not always very clear about explaining what the difference is between the two items and why your car may have one or the other to operate it.

Knowing whether your vehicle uses a timing chain or a timing belt is extremely important when it comes to understanding not only what it does in your car, but how long it's going to last and what you can expect in terms of signs that there's a problem with it. Let's take a look at what exactly timing chains and timing belts do, and how you can identify problems with them in your vehicle.

What is The Difference Between a Timing Chain and a Timing Belt?

Both the timing chain and a timing belt are used to maintain the precision timing of your engine's operation. They link the camshaft and the crankshaft in your engine so that as one turns so does the other. This ensures that as the pistons rise into the cylinder of your engine, the valves will open to allow them to enter if it's an interference engine and then they will close again after the piston has been forced down because of the combustion reaction.

When everything is working as it should, this happens incredibly fast and allows your engine to produce the power necessary to move the entire vehicle at speed. When something goes wrong however, this timing is thrown off and you risk a loss of fuel economy, a loss of power, and potentially some serious damage to your engine depending on how the timing belt or timing chain has failed.

The History of Timing Belts and Timing Chains

Timing chains and also timing gears, which perform the same function as belts and chains but use interlocking gears that get the job done rather than being connected by a belt, were used initially in many vehicles simply because it was the most obvious technology available at the time. Reliable rubber belts didn't really exist at the time, and it was basically taken for granted that the part should be made of metal.

As time went on, and rubber became more versatile and durable, it became a more attractive option in terms of reducing costs and weight in the car's engine. They were considered to be durable enough to get the job done, even though they didn't last nearly as long as a timing chain did.

Because of things like the oil crisis and the overall push to boost fuel efficiency of vehicles while reducing costs, the timing chain fell out of favour for a lot of manufacturers and drivers. The timing belt was quieter, as we said, cheaper, lighter, and in many cases just easier. Unfortunately, it's just not as durable as a chain.

While some vehicles have always used chains, in recent years there has been more of a push towards using chains again rather than timing belts. Many manufacturers will only use timing chains in newer vehicles that have been made in the last few years. If you're not sure what your vehicle runs on you can check your owner's manual to find out for sure.

The Difference Between Timing Belts and Timing Chains

A timing chain is made of metal and will typically last much longer than a timing belt. By way of an example, your manufacturer will have written in your owner's manual exactly how long the timing belt in your car will last if it is run on a belt rather than a chain. Typically, vehicles with a timing belt have a recommended lifespan of 60,000 miles to 90,000 miles before a timing belt will need to be changed. Some vehicles, like a Volkswagen Passat for instance, might be able to go 105,000 miles with the timing belt that it came with. That's based on the manufacturer's recommendation, and as they say, your mileage may vary.

When it comes to timing chains, although some manufacturers do recommend that you give them a look after a certain amount of time for some maintenance, most manufacturers suggest that the timing chain that your car came with will last the entire life of the vehicle. Obviously things can happen that will reduce the life of either timing chain or a timing belt  but under normal operating conditions you can expect a timing belt to last for 60,000 to 90,000 miles while a timing chain could last for as long as you own the car. That is the main difference in terms of how these parts perform.

Another difference between a timing chain and the timing belt is sound. Timing belts are much quieter than timing chains are. A timing chain looks a lot like the chain on a bicycle, and since it's a sturdy metal device, it does create a noticeable sound even when it's running perfectly normally. It's not a problem for some drivers, but it does present a nuisance to others who like a very quiet running automobile.

The last very significant difference between timing belts and timing chains is how they fail. Although it's a bad situation when either a belt or a chain fails, the potential damage caused by that failure is definitely different between the two. That doesn't mean one is preferable to another necessarily, it's just levels of badness.

When a timing belt fails and your camshaft and crankshaft are no longer synced together, the valves will not open in the cylinder but the piston will still rise. If the piston crashes into the valves then you're going to have a damaged valve, a potentially damaged cylinder wall, damaged cam heads, damaged pistons and more. The repair bill associated with this kind of damage can be in the neighbourhood of $3,000 to $4,000.

As hard as it may be to believe, when a timing chain fails it can actually be worse than a timing belt failing. When a timing chain fails the damage is often much more extensive just because of the fact that your timing chain is a heavy metal piece of equipment that can break apart and cause more extensive damage. In fact, it's not unheard of for an entire engine to be replaced if a timing belt fails. It's actually cheaper just to buy a new engine then repair everything that could have been damaged when the chain in the old one breaks. That said, timing chains fail much less frequently than timing belts, so this is not a usual circumstance.

Signs of a Bad Timing Chain or Belt

When your timing chain goes bad it presents slightly different symptoms than a bad timing belt. many of them can be comparable to each other however.

Noises: Both the timing belt and a timing chain will make noticeable sounds when they begin to fail. If you have a loose timing chain, it's going to cause some vibration inside the motor. That in turn leads to a distinct rattling sound. If you're hearing an unusual rattling that you're not used to, then the timing chain may very well be the culprit.

When it comes to the timing belt, if it goes wrong the sound you hear is more of a ticking sound. You can consider it something like the sound a roulette wheel makes when you spin it.

Engine Misfires:  Because the timing belt and the timing chain perform the same function in your vehicle, when either one begins to fail you will experience the same symptom of engine misfires. The belt and the chain are designed to maintain the precision timing in your engine. So, it's not surprising that if the timing is off your engine won't function properly. This can lead to serious engine misfires because the valves may not be opening and closing at the exact right time they should, or the combustion reaction is being thrown off and either happening too early, too late, or not at all. When that happens, you get what it's called an engine misfire, and you don't have the combustion reaction occurring in one cylinder at the right time. This will reduce the overall efficiency of your engine and cause a drop in fuel efficiency as well. I'm a long enough timeline, it can really affect your bottom line at the gas pumps.

Oil:  When you have a problem with your timing chain you may end up getting metal shavings in your motor oil. Because the timing chain is lubricated by the motor oil along with the rest of your engine, if it starts grating against the gear or something like that then pieces of metal will file off and find their way into the oil. When you change your oil filter, which should be happening every 3,000 to 5,000 miles or so, you're going to notice that there are little pieces of metal that show up in the oil when the filter gets changed. When that happens it's a good sign that you need to change your timing chain because something is wrong.

When you have a timing belt, the teeth on the inside can wear down and break off. Those can fall into the oil pan and end up clogging it. That prevents the oil from circulating properly which can in turn lead to your engine overheating as a result.

Engine Won't Start: With both a timing chain and a timing belt, if they have broken and fallen off the gears then when you try to start your car you will be unsuccessful. The starter motor will engage, and you'll hear that, with the engine itself simply won't turn over and your car will be unable to start. That is going to result in the need for you to tow it to a mechanic to get it checked out.

There was a time between the 1980s and the early 2000s when a timing belt was a more efficient option in many automobiles. They were cheaper and they were very durable, and they could get the job done pretty well in terms of maintaining the correct timing in your engine. These days, a timing chain is proving to once again be the more reliable option for many drivers. They offer superior longevity and efficiency in a way that many timing belts just can't keep up with because of the nature of the product. The overall cost offset for having a timing belt is really worth it compared to the benefits of a timing chain.

Regardless of what your vehicle runs on, as long as you maintain it as well as you can and keep your eyes and ears open for potential problems hopefully you'll be able to avoid any extensive damage to your engine and keep your car running smoothly for a long time to come.