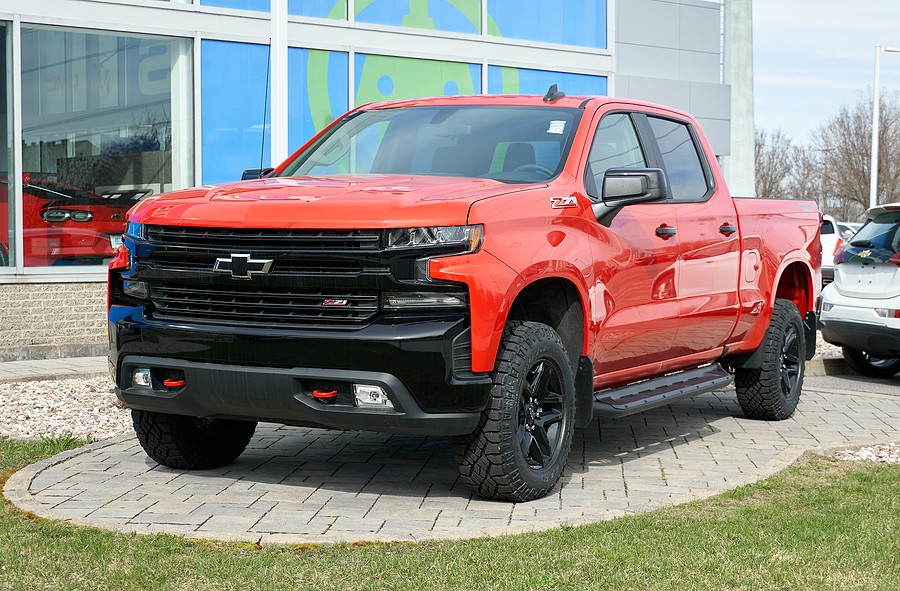 Chevy Vortec 6000 is a V8 engine often just known as the Chevy 6.0 Vortec. Chevy uses these in their heavy-duty pickup trucks, SUVs, and vans. It's the last Vortec engine currently in use by Chevy as part of the Generation IV small block engines. All the others have been replaced by the EcoTec 3 family of engines as part of the Generation V small block engines.

The 6.0 Vortec engine was introduced in 1999 and it stayed in production until 2019.The 6.2 L Vortec took over after that. During its 20 years of production there were nine different variations of the 6.0 engine. It was a popular engine choice in heavy duty Silverado and Sierra, as well as Yukon SUVs.

Despite being a powerful engine with a generally good track record, Chevy has had some issues with the 6.0 engine over the years. Let's take a look at some of the most notable issues that drivers have experienced with the 6.0 engine, so you know what you're getting into if you're in the market for a vehicle that uses one.

This is a common problem for owners of vehicles that have the Chevy Vortec engine. If you let it sit for a while without running it the oil seems to struggle a little bit through the entire system when you get it going again. That creates a repetitive ticking sound as a result of reduced pressure or a potential blockage somewhere along the line. It’s loud enough that it becomes a distraction when it happens, but it doesn't necessarily mean there's a problem that needs to be fixed right away when it does occur.

For many drivers if the issue presents itself a simple matter of cleaning up the galleys by running the truck for a while usually gets it working again without the noise. In more extreme circumstances replacing the oil pump will also ensure that the issue doesn't happen again, but that generally needs to be done by a mechanic.

A good way to avoid the problem altogether is to make sure you're starting your Chevy every once in a while, even if you're not driving it. That's a good rule of thumb for any vehicle however, no matter the make, model, or year. If you know it's going to be sitting for a while, just start it up once every week or two to get it up to temperature and then turn it off again.

The Vortec V8 who's known to have some issues, in particular during the colder months, with hard starts. If the engine temperature was hovering around zero, the problem was related to an issue with the automatic choke plate. If you could smell gasoline in the cabin of the vehicle, then this was almost certainly the case. One of the ways to deal with this was to remove the air cleaner and give the choke plate an inspection. If the plate was closed and that was the problem. At that point you just needed to open the choke place a small amount, maybe 1/8 to 1/4 of an inch to get rid of the problem.

There was also a potential problem with spark plugs when it came to hard starts with the Chevy 6.0 engine as well. Obviously that's a problem that can affect any vehicle and any engine, not just the Chevy 6.0 in particular, but it didn't pop up for several drivers so it would be worth looking into if that was a problem with yours.

Avoiding hard starts was a little easier to do if you kept up with your routine maintenance, and also plugged in the block heater between uses or park your vehicle indoors as much as possible.

Engine misfires were not an unheard-of problem for the Chevy 6.0 litre engine either. This wasn't an issue that was related to one specific design flaw however, which makes it a little harder to diagnose if you're experiencing misfires on your own. There are a number of reasons why the engine could misfire, so getting to the root of it might take a little bit of effort.

Some of the more common reasons for engine misfires in the Chevy 6.0 included faulty spark plugs or problems with the fuel and air mixture being off again, there was no one particular issue across the production run of the Chevy 6.0 engine that could lend itself to a concrete explanation for why this happened, making it one of the more frustrating problems that some driver's had to endure.

A not uncommon issue for this particular Chevy engine was a reduced power warning light coming on. This morning light lets you know that there's something drying your horsepower and reducing the overall functionality of your vehicle. Generally, this is a problem with the throttle mechanism, such as carbon buildup or even something in the electronics. Sometimes a visual inspection can help you solve the issue if there were issues with broken, bent, or frayed wires that were visible. If there was nothing noticeable then the problem probably needs a mechanic to figure out.

The throttle position sensor monitors how much air is entering the engine by monitoring how open the throttle is. This in turn helps determine how much fuel gets sprayed into the engine. It isn't uncommon in Vortec engines for the TPS sensor to fail and send the incorrect air flow readings. That in turn causes the computer to send the wrong amount of fuel causing it to burn too lean or too rich as a result.

While it wasn't unheard of for the throttle position sensor to fail it right, it was also fairly frequent that it would just become clogged up or covered in grime and residue as well.

Going hand-in-hand with the reduced power warning, the general consensus among most critics of this particular engine was that it just didn't have power comparable to something like the Duramax engine. While the horsepower difference between the 6.0 Vortec in the Duramax was not particularly dramatic, when you compare the torque the Vortec fell extremely short.

The Duramax engine was a 6.6 L and it was available in both Sierra and Silverado 2500 and 3500 HD models. While the Vortec had 373 to 380tq the Duramax was pulling a stunning 660 to 765tq.  That means the Duramax literally had twice the torque of the Vortec engine. The result was that the Vortec was heavily criticized for having a lack of towing capacity and acceleration power.

Most drivers of Chevys with the 6.0 engine didn't experience any water pump issues until they got to some fairly high miles. Water pumps are something that do need to be replaced so it's not that unexpected that they would be issues. In particular this seems to happen with Chevy 6.0 engines around 150,000 miles. All things being equal, that's actually a pretty reliable length of time for any water pump to last. Typically, they need to be replaced between 60,000 miles and 90,000 miles, so at this point you might very well be on your second water pump and other vehicles.

You could arguably chalk this problem up to drivers simply not being aware of scheduled maintenance that needs to be undertaken. Any water pump that lasts for a solid 150,000 miles has definitely earned its keep and it's not surprising that it would need to be replaced. Since many Chevy 6.0 engines have lasted much longer than 150,000 miles, it was not unheard of that the water pump would need to be replaced two or three times.

Chevy uses something called active fuel management as a fuel efficiency feature. Unfortunately, even though this feature is meant to improve your gas mileage, it also frequently set off the low oil pressure light and tended to cause your engine to burn through oil much more quickly than normal. Frustratingly, the exact reason for this has never been fully figured out.

The exhaust manifold is what helps direct the air out of the engine into the exhaust pipe. They experience high temperatures which is what typically causes them to fail by wearing out the gaskets and leading to an exhaust leak. In Chevy 6.0 Vortec engines this happens more often than not as a result of the bolts in the exhaust manifold breaking. If the bolt breaks, it creates a hole in the manifold through which air can be released.

Typically, you notice this was a problem if the exhaust sounded particularly loud as he started up the truck or they were excessive vibrations.

A number of drivers using the Vortec engine and had issues with the engine simply stalling out or shutting down on them. That's annoying when it happens in the driveway, but extremely dangerous when it happens on the highway. The specific reason for this problem could have been somewhat varied and it's not unheard of that one or two drivers simply ran out of gas at an inopportune moment. This was by no means a common problem, and more likely just a statistical anomaly that could have happened with the engine of any vehicle.

Obviously when you're driving a heavy-duty pickup truck, you're not expecting the same kind of gas mileage that you're going to be getting out of a sporty little hybrid or something like a Honda Fit. That said, a Vortec 6000 engine was likely to only give you about 10 miles per gallon to 12 miles per gallon.

The knock sensor sits underneath the intake manifold. It measures engine vibrations and if it detects honey, which is what we call engine knock, then you know that your gasoline is being burned on evenly. When engine knock is occurring then the gas in the cylinder is igniting in just a small pocket creating a little burst before another pocket burns. This creates a shockwave that increases pressure and makes the knocking sound that gives the phenomenon its name.

While this could certainly happen in a typical Chevy Vortec engine, it was also not uncommon for the sensor itself just to fail. The sealant on the sensor was known to be of low quality which caused water to enter it sometimes. That caused the wires to corrode and the sensor would fail.

A bad knock sensor ends up causing performance issues because it's sending incorrect signals to your truck's computer which tries to compensate for a problem that doesn't exist. That intern actually creates the problem. Ironically, if the knock sensor was sending the wrong signals, the timing adjustment your computer made could have been so severe and actually created a knock.

Despite the problems we've listed, the Chevy 6.0 engine has proven itself to be extremely reliable. Many of these engines have managed to go 300,000 miles or more without needing any major repair work. In fact, nearly every other part of the truck will likely need to have significant repairs before the engine does, a true testament to the dependability of this engine.

Despite a handful of issues, the Chevy Vortec engine has been remarkably reliable over the years. No engine is ever going to be perfect, and obviously Chevy has had a handful of significant problems over the years. The main concern with the Chevy 6.0 engine was really the power and fuel consumption. It was not prone to failure or damage more significantly than most other engines on the market, and it's certainly worth your time and money.