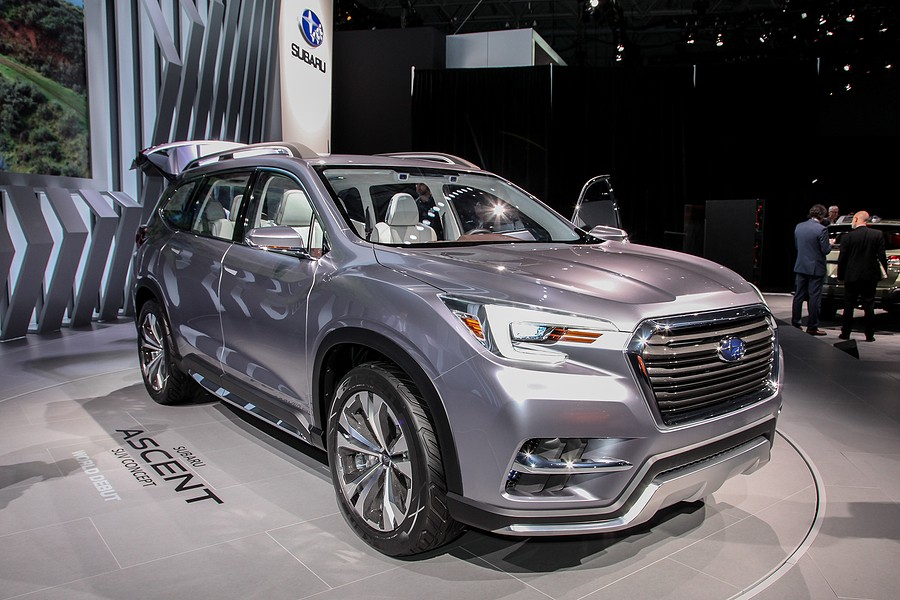 Despite Subaru being a very reliable car company that produces high quality and trustworthy cars for numerous years, they have not made a great car every time they have produced a new vehicle.

Subaru is an automobile manufacturing division of the Japanese transportation company, Subaru Corporation, the 22nd-largest automaker in the entire world, as measured back in 2012. The cars that Subaru produces are known for their boxer engine layout in vehicles above 1500c, with symmetrical all wheel drive train layout being introduced back in the 1970s.

These mechanical parts became trademarks just years later, with the brand also offering turbocharged versions of their popular passenger cars, like the Legacy and the Ascent – the model we will be talking about today. Even with this turbocharged engine, there are still plenty of Ascent problems.

Overall, the worst of the Subaru Ascent problems deal with the electrical components within the car. The 2019 Subaru Ascent has the overall most complaints out of every model ever made, while many publications and websites also rank 2019 the worst model year based on factors like repair cost and average mileage. The most reported problem of all models is the possibility of the open tailgate to drain the battery in the 2019 Subaru Ascent make and model year.

The main problem with the Subaru Ascent electrical issues is the open tailgate can drain the battery, while the second issue is that it doesn't start, followed by the power door locking malfunctioning, radio losing presets, and the radio not having any sound.

With the open tailgate draining the battery, this is the most reported issue with the Subaru Ascent problems in the electrical category. This generally occurs at an average mileage of 2,650, with a severity rating of 9.0 out of 10.

Some of the owner comments about this issue involve the car taking a very long time to get warm, the trailer hitch taking up a lot of space, the alarm can keep going off unintentionally, only one CD at a time for the radio usage, and rough shifting in the transmission. In addition, if your tailgate is open for a couple of hours, your battery will drain and die – leaving you stranded and being a huge Subaru Ascent problem.

The second most reported user issue with the Subaru Ascent problems in the electrical category is the car not being able to start. This problem generally occurs at 10,750 miles and has a severity rating of 10. Users say that the car will not start, and the mechanic might have to replace the battery, but the problem continues and happens multiple times.

The third issue with the Subaru Ascent problems is the power door locking malfunction, which has a lesser severity rating of 6.0 and occurs at a very early time, at around 1,300 miles. Users report that the auto-lock will engage when you finally get up to speed in your car, but this causes a very fast and repeated clicking noise that happens the whole time you are driving.

The NHTSA electrical problems with the Subaru Ascent reports that the heater is locking while using, the pedal vibrates when you drive at high speeds, the battery can drain when parked overnight, and the rear gate does not lock when closed.

The second category of issues for the Subaru AScent problems is the interior accessories category – this category is obviously less severe than the transmission or the engine, but still can make Subaru Ascent owners want to return their vehicle and not feel safe or comfortable while operating their car. The main complaints in this category is that it cannot import phone contacts, the GPS not working correctly, issues with the Carplay system reading texts, radio making a feedback noise, and the voice recognition malfunction.

Regarding the Subaru Ascent steering problems the main complaints involve loose steering for both users and the NHTSA. The loose steering generally occurs very early on, and has a severe rating of 7.0 out of 10. Users say that the car is unsafe and the wheel will shake or jerk for no reason. Although this can be due to a small problem with the road itself, the shaking can be unsafe for drivers and passengers.

Despite the exterior accessories category not having that many complaints for users, the NHTSA has reported numerous issues with the visibility and wiper. Although this has a severity rating of a little bit less than 7.0 and is not a dire fix, the lack of visibility and clear vision can impede the ability to safely drive on the road. In addition, there have been reports of the windshield cracking easily, just by hitting a small rock. This will require a windshield replacement and will cause numerous cracks in the windshield, costing a lot of money over time.

The NHTSA reported nearly 20 issues with the brakes section of the Subaru Ascent, which shows cause for concern since braking keeps you safe and the other drivers on the road safe. This problem generally occurs at around 3,500 miles and has a severity rating of around 8.5 out of 10.

The main complaint of the NHTSA regarding the brakes are the issues with servicing the brakes. There have been numerous reports of the brakes making noise and vibrating when you try to slightly reduce the speed, and the brakes shaking when you go downhill. In addition, the brakes can squeal and make noise while you use them, which shows cause for concern. The brakes also ride very rough and can shift back and forth while trying to slow down securely and safely.

The NHTSA reported 17 complaints regarding the drivetrain problems with the 2019 Subaru Ascent. All of these issues involve the powertrain, and generally occur at around 7,700 miles and have a severity rating of just over 7 out of 10.

These powertrain issues are related to the car shaking while idling, shifting, or stuttering while trying to shift and not being able to change gears. In addition, the check engine light can come on your dashboard and the engine can lose power over time, briefly sputtering and not giving enough power while you drive uphill.

In addition, the car can lose power while you drive and can jump while you are accelerating. There have also been sounds of abnormal clunking and squeaking noise that is detected from both the steering and suspension system.

The next category that contained numerous NHTSA complaints is the engine section, with over 16 complaints regarding the engine and vehicle speed control. The Subaru Ascent engine problems involve the car shaking when it is not in motion, the check engine light flashing, the vehicle losing power after rapidly accelerating, the vehicle shutting off unexpectedly, and the odor smell or sound coming from the engine.

The first recall for the Subaru Ascent in 2019 was the fuel pump becoming inoperative and the engine stalling. This recall was first announced in April of 2020, and affected nearly 200,000 vehicles. This refers to the low pressure pump failing, meaning that the engine might steal without the ability to restart the vehicle, which can increase the risk of a crash.

The second recall for the Subaru Ascent is the incorrect measurement of hydraulic fluid pressure, which affected nearly 80,000 vehicles in late 2019. If the fluid pressure is measured higher than it is actually in the car, then the hydraulic pressure will, in turn, be reduced. If this happens, then the transmission drive chain might not have the right tension and be taught enough, resulting in a loss of power and acceleration, and an increased risk of a crash as you drive along the road.

The last recall for the 2019 Subaru Ascent hat highlights other Subaru Ascent problems is the missing spot welds in the B-PIllar area, which came about in the middle of 2018 and affected less than 300 vehicles. In the event of a crash, the missing spot welds can cause the vehicle to be weaker and compromise the vehicle’s overall strength, increasing the risk of injury.

Despite a somewhat poor reception of the crossover effort made by Subaru, the Tribeca, the second chance at a family crossover was in the works. The second crossover was released in 2019, debuting the 2019 Subaru Ascent, which impressed reviewers as a safe model and receiving a score of 8 out of 10 from the US News in terms of overall performance.

Since the Subaru Ascent problems occurred in the first year of production and the overall quality control issues, Consumer Reports has given the 2020 model a reliability rating of just 3 out of 5. This is on par with other similar Subaru models, showing there is room for improvement.

Compared to other similar vehicles on the market and other vehicles in the same class, there have been relatively few complaints in terms of the Subaru AScent user reviews. The NHTSA website reports electrical issues, which mostly stem from the battery problems. Overall, customers are fairly happy with this make and model of car, with an overall satisfaction user rating of 4 out of 5 according to Consumer Reports.

Other Subaru Ascent Issues and Problems

Regarding forums of the Subaru Ascent, there are numerous problems that users have reported about their cars. One of the most common issues is a huge plume of blue smoke coming out of the engine after you start the car. Users have reported that smoke comes out of the exhaust, and is much more than any smoke should be. Drivers have reported that they are afraid the car might catch on fire, while the black smoke is coming from underneath the vehicle. Within about 30 seconds, the car smoke might subside and stop, but the car is still going through something with the engine.

The second user reported Subaru Ascent problem is the drivetrain that began to downshift on its own, and then stalling. As we know, the engine stalls while using this car, and the powertrain has tough issues.

In addition, the low pressure fuel pump might need to be recalled. There is also a persistent gasoline smell and shows a strong odor of fuel that is coming from your car. This has to do with the fuel system and the engine system, showing how the stalling and the powertrain issues can cause unnerving smells, blue smoke, and performance issues.

The other reported issues in the Subaru Ascent 2019 is the door design flaw, a squeak when shifting from Park to Drive, the tailgate being stuck closed while still emitting a continuous warning tone, the driver’s seat being uncomfortable, the sunroof panel cracking, and the check engine light coming on.

According to Edmunds website, the overall 2019 Subaru Ascent Consumer Reviews comes to a total of 3.6 out of 5 stars, with 162 reviews. There are many reports of people loving the car, for the comfort and the technology, but not liking the transmission. The systems under the hood, like the engine and the transmission, do not work well and cause a lack of performance. In addition, the Starlink Entertainment system is not the best, the Carplay will not work over Bluetooth, the touch screen can be temperamental, and the Lane Assist does not function when the wipers are on high speed.