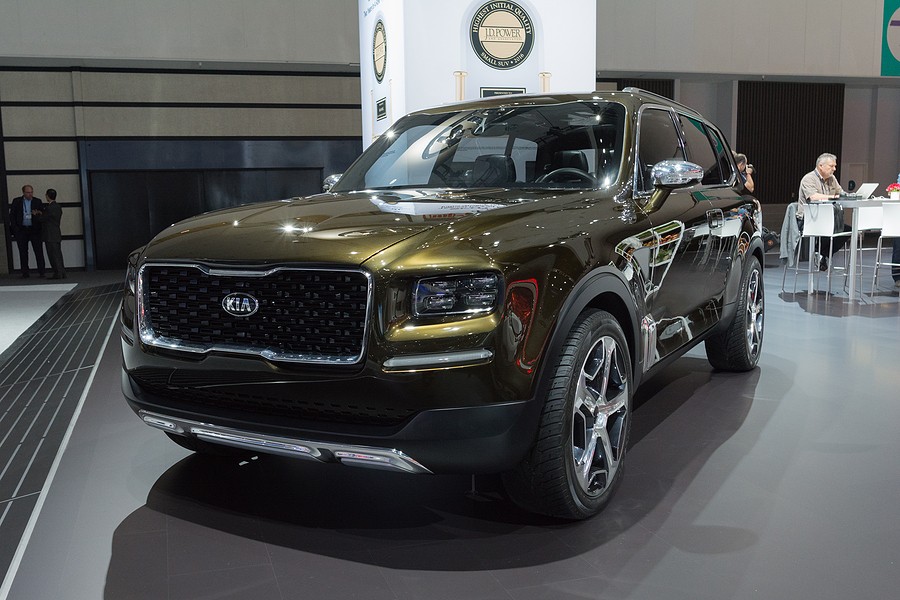 The Kia Telluride is a new vehicle on the market that has gained positive reviews – but also has earned some complaints and recalls that have comprised the 2020 Kia Telluride Problems. The Kia Telluride is a mid-size crossover SUV that is built by Kia Motors, a South Korean multinational automotive manufacturing company that is headquartered in Seoul and the second-largest automobile manufacturer in the company.

Originally first introduced in 2016 as a concept car, it debuted in the spring of 2019 for the following year’s model, and has been produced ever since. Despite being named the 2020 World Car of the Year in 2020, there are some problems that are worth noting.

The side crash rating earned a total of 5 out of 5 stars. The combined side barrier and pole ratings earned a 100%, with the test consisting of how the front seat and rear seat hold up in the event of a side crash. The side barrier rating also earned a 5 out of 5, with the side barrier test simulating an intersection collision between a vehicle that is standing still and a vehicle moving at 38.5 miles per hour.

Despite these windshield issues not causing any injuries for the most part, these have resulted in costly repairs and annoyances for the 2020 Kia Telluride owners. The typical cost of a windshield replacement is usually between $100 and $400, with the labor and the average cost ranging between $210 and $230 for the labor and the hourly rate. Collectible cars, high end cars, and luxury vehicles can go upwards of around $1,500 for the windshield replacement.

The main complaints regarding the exterior lighting involve the halogen projector headlights being unsafe at night since they do not have enough light output to illuminate the road. The light spread is limited and does not seem to go far enough to completely light up the road during the dark. This can create a potential electrical or fire hazard for some cars.

According to Motor Biscuit, there is a list of the most common complaints about the 2020 Kia Telluride and the most prevalent 2020 Kia Telluride problems. First, the rear air conditioning vents randomly turn on without the driver turning them on, which can waste battery and change the desired temperature of the car. Secondly, the engine can overheat when it changes from idling, stopping, and then accelerating in the car.

In addition, the front passenger side door won’t open or has trouble opening during certain instances. If you previously locked the door, it could get stuck, and you may not be able to exit the car. This can lead to a huge inconvenience or a safety issue if you are trying to get out of the car after a crash.

Furthermore, the rear captain chair can rattle due to the loose seat back cover. A loose back cover will make it uncomfortable to sit in for long car rides.

Regarding the air conditioning system, another problem besides the AC system turning on unintentionally is that the rear heat might not blow warm air when needed, causing an undesirable temperature or a too-cool cabin when it is cold outside.

Another issue with the Kia Telluride problems is an inaccurate GPS or navigation directions, which can cause the driver to get lost, especially if they are driving by themselves and do not have anyone else helping them navigate to their destination.

Some of the biggest concerns about the Kia Telluride Problems involve the reliability and the manufacturing quality, the maintenance and parts, the electrical system, and the wheels and tires. The pros of the Kia Telluride involve the value, the appearance, the interior, the comfort provided, the handling and steering, and the seats.

Regarding the reliability and manufacturing quality, users report that they were not able to test drive the vehicle, the stitching on the steering wheel is sharp to the touch, the problems are inconsistent which makes it hard to diagnose and fix, and the car has broken down after minimal use.

Looking at the electrical system, the dealers have added a charge on top of the price of the vehicle because of a warranty, resorts of the Kia Telluride problem involving the battery not working, the speedometer not showing correctly, the battery dying after use, and the dealership not being able to find any electrical issues to diagnose.

The wheels and tires that have caused concern among uses mainly focus on a few key issues. First, the stitching on the steering wheel is sharp to the touch, and when the car comes to a complete stop, the driver needs to press a button on the wheel or the accelerator lightly for the car to engage again. In addition, the car can break a little rough and can hug the left side of the road while driving.

The pros of this car involve the value and appearance. Users love ventilated front seats, the infotainment system that is easy to use, the easy touchscreen and buttons, and the adaptive cruise control, and the stylish look and the comfortable inside of the car.

Another proof the vehicle is the features you can get for the great value, almost counteracting the Kia Telluride problems. You can gain ventilated front seats, the blind spot detection safety feature, the adaptive cruise control to keep your speed steady, the functional air conditioning, the ample ability of USB ports, the navigation working well together, and the comfortable interior and seats of the vehicle.

According to MotorBiscuit, the Kia Telluride gets many favorable reviews for its cargo space and interior volume. Even though this car is actually based on the Sorento of the same company, this car has a much larger volume and adds more comfort for long rides, becoming the largest vehicle that is on the market from the Kia production. The standard features include a power-adjustable driver’s seat, dual sunroofs, and the ability to connect with Apple CarPlay and Android Auto for advanced comfort.

Regarding the safety, the Kia Telluride is a top pick for solo drivers, couples, friends, and families. The Insurance Institute for highway Safety gave the Telluride a top safety pick rating, meaning that they scored the car very high on the safety features and the driver-assist technology available in this model. The driver-assisted safety technology includes standard automated emergency braking that can help aid in detecting pedestrians, lane-departure warning and lane keeping assistance, and blind spot monitoring, helping to overshadow some of the minor Kia Telluride problems with these great safety features.

Regarding the 2020 Kia Telluride, there has actually only been one recall – so far. Since this is a new model, there shouldn't be as many recalls as cars that have had various models over the year, so this Kia Telluride only has one recall involving the front seat belts. If a child seat is not properly secured and locked in, there is a higher risk of injury to the occupant in the vent of a crash.

Kia Motors had to recall certain 2020 Kia Telluride cars due to a Kia Telluride problem of the seat belt assembly in the fort passenger seat, the second seats, and the third row seats might not tightly secure a child restraint system, highly increasing the risk of injury in the event of a crash. As such, these vehicles do not meet the requirements of the Federal Motor VEhicle sAfety Standard, which relates to the Occupant Crash Protection.

If you have one of these vehicles and you believe that you need it recalled, Kia should notify you and the dealership should inspect the car and replace any incorrect or unsafe assemblies that have to do with your seat belt. The repair for your Telluride will also include replacing the seat belt for the driver’s side of the car, which has a non-US label with a specified US-labeled seat belt. The repair should be free, so you should contact Kia if the dealership tries to charge you anything for the repairs directly related to this recall.

The 2020 Kia Telluride #2 rating is mainly based on the score within the Midsize SUV category when compared to other similar cars. It was the winner of the US News 2020 Best 3-Row SUV for FAmilies and the Finalist and runner up for the 2020 Best 3-Row SUV for the Money in terms of overall value. Along with these accolades, it also earned the #2 spot in the SUV with 3 Rows category and #5 in the Crossover SUV category.

The pros according to US News involve a gentle and smooth ride, large space and cargo hold, lots of safety features, and a handsome and stylish cabin. The main con of the 2020 Kia Telluride involves less agility than similar models.