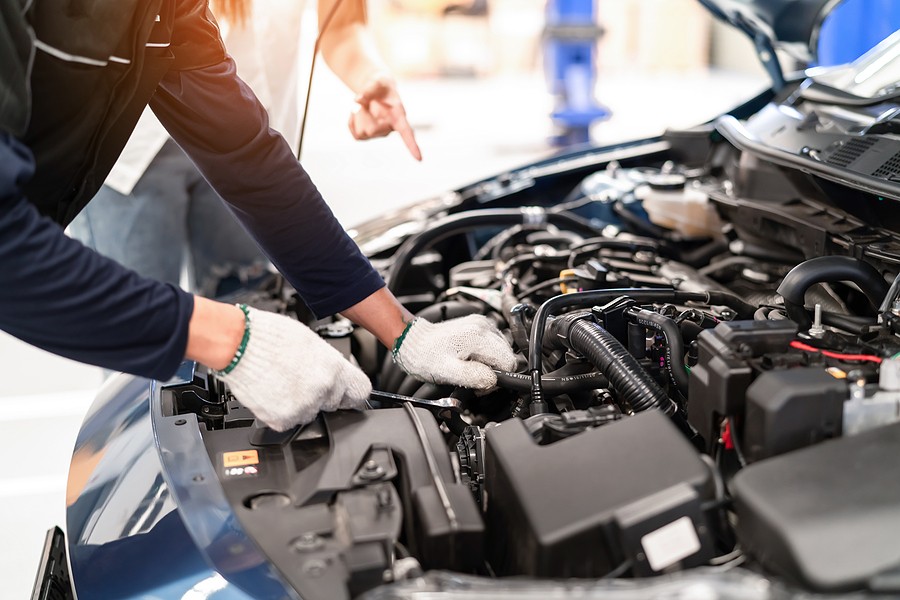 The noises your car makes are extremely helpful in diagnosing problems. When you first get a vehicle, you can quickly become accustomed to the various sounds that it makes so that you know how it should sound when everything is running normally. The particular way your engine hums, any particular shakes and vibrations that occur in your vehicle all have a sound that should be subtle, but indicative of a properly functioning engine and its components.

When you start noticing unusual sounds, things like grinding sounds, squeaking sounds, whining sounds and more these are good indications that something is going wrong. Of course, you never want to hear any sounds like this, but it’s also helpful and narrowing down what happens and therefore what you can potentially do about it.

One of the more unusual causes for unexpected noises in your vehicle is when you’re not driving quickly, rather slowly. If you notice noises that only happen when you’re driving slowly then it does help narrow down what could be the source of the problem. There are some things that you can be on the lookout for to help explain why this phenomenon is happening and of course what you can do about it

More often than not when you hear a squeaking sound when you’re driving slowly it’s a problem with your brakes. it could be you have some poorly fitted brake pads or discs that are causing the problem. It also could be indicative of worn wheel bearings.

It’s obviously unusual for brakes to make noise when they’re not under extreme stress, like braking at high speeds or suddenly to avoid an accident. When they start making noise just from gentle application at low speed then it is cause for concern because it means something has definitely come out of alignment in some way. Especially if your brakes don’t make noise when you stop at normal speeds.

In general, brakes make noise because of the high-frequency vibrations that breaks are under as part of routine operation. Friction is what breaks rely on to actually work, so they’re constantly under some kind of stress. Caliper clamps squeeze the brake pads when you put your foot on the brakes which is what makes them work.  The brake pads grip the rotor and it slows your car down thanks to the power of friction. It’s also able to absorb all the heat created by this reaction and occasionally you will get noisy as a result.

Typically, the shim between your brake caliper in the pads absorbs most the vibration and eliminates a good portion of the noise that would otherwise be generated. Still, things can go wrong which Is what leads to these unexpected and bothersome sounds. Let’s take a look at a few of the situations that can result in noises like squeaking coming from your car even when you’re driving at slow speeds.

There’s something in your brake setup called the shoe brake backing plate. This requires lubrication in order to function properly. If the lubrication has run so low that you may be hearing squeaking from your rear brakes when you put pressure on your brake pedal even when you’re driving at a low rate of speed. This is because the shoe scrapes against the backing plate and makes that squealing noise. Without properly working lubrication you’re going to get a buildup of rust which leads to metal on metal squeaking.

Fortunately, this is a fairly easy problem to fix when you use some kind of appropriate lubricating compound. Unfortunately, that doesn’t just mean any old motor oil or WD-40, you’re going to need something like an anti seize compound designed to operate at high temperatures or something called moly paste 60. This needs to be applied to the back of the brake pads in the back of the brake pad shoe contact points. Putting on the brake pads themselves would be very dangerous and cause the brakes actually function more poorly.

It’s possible that the brake pads themselves on your car are the cause of this sound you’re experiencing not because there’s something wrong with them exactly, just because of what they’re made of. Because brake pads are meant to absorb an extreme amount of heat and friction then they have to be made of materials that absorb heat and friction effectively. There are materials in modern brake pads such as Kevlar, ceramics, various composite materials and so on.

Lower grade brake pads and often aftermarket brake pads are embedded with metal. Well most brake pads have a certain amount of metal, there is often more than is safe for your brakes to operate properly in very low-quality pads. As they wear down, this metal will start scraping loudly on the rotors of your brakes and create bothersome sounds.

The worst part of at least kind of brake pads is how they are designed to function. That means the sound you’re hearing may be a normal part of how it operates, and it will continue for as long as you have the brake pads on your vehicle. That could be as much as 30,000 miles to 40,000 miles worth of driving. The only solution in this case is to put new brake pads on, since there’s technically nothing wrong with the ones you have.

Keep this in mind if you’re looking for new brake pads that you need to be aware of what they’re made of if you want them to not only perform their job properly but to be not particularly loud when you make use of them. The best materials for brakes are organic materials like resin, fibre, rubber, Kevlar and composite of those various materials. Everyone wants to save a few dollars when they’re getting vehicle parts that need to be repaired or replaced but skimping on brake pads is generally not a good idea. If you have to shell out for one high-quality part in your vehicle, make sure that this is it. If you check out AutoZone, you’ll see that some brake pads start as cheap as $20, but the higher-quality ones are going to cost you a bit more money. Go with a higher quality brake pad whenever possible. They’re not that much more expensive, but they do provide Superior performance.

One of the most common causes for the squeaking of brakes regardless of the speed you’re travelling at is when moisture gets in them. This tends to happen on really humid mornings as you head out for work. If there’s a lot of dew on the grass then that same moisture may form on your brakes as well. In this case it’s definitely an annoyance but it’s not something you need to be overly concerned about. It’s impossible that you can avoid having moisture in your brakes at some point in time so if it’s only the kind of thing you do notice on those mornings when it’s damp then you probably shouldn’t worry about it too much.

The dampness is causing a thin layer of rust to form on your rotor. When the brakes are applied the thin layer of rust is being scraped off and creating a powder that greats between the pad and the rotor due to the intense friction and that’s the source of your sound.

As long as the sound you’re experiencing doesn’t affect the way your brakes perform them everything should be fine. That’s one of the things that makes this such a problem insofar as it’s not actually a problem.

Just keep in mind that if this is happening on mornings when it’s not particularly damp, or if you leave it extremely dry climate that is likely a different issue altogether that you need to address.

Sometimes foreign substances can make their way into your brake assembly. Much like the way that dew can form inside your brakes, you may end up with some grease and grunge around your brake assembly which prevent it from working the way it’s supposed to. Because it’s preventing your brake pads and your rotors from making perfect contacts in order to slow your car down, you can end up creating any kind of sound from a squealing to a hissing to a squeaking as a result.

Unlike the problem with moisture on your brake pads, this one is more likely to cause a performance issue as well as the annoying sound. If you are experiencing a problem with your brakes not working properly then you definitely want to go to a mechanic to get that checked out right away. If you find it you have to push the brakes harder than normal , or it just takes a long time to come to a complete stop, then that’s a clear safety concern that you don’t want to let go for any length of time. In this case, the noise that it makes is a secondary concern.

The Cost of Repairing the Squeaking Sound in Your Car

As we mentioned, in some cases the squeaking could be caused just by the normal use of your brake pads based on what they’re made of. If this is the case, you could have to pay for new brake pads if you want, but you’re fixing only a noise problem and not a performance issue. If you can deal with the sound when it’s not causing a problem in your performance, then there’s no reason to actually fix this at all. It’s just a matter of personal taste at this point.

If it is a problem that has an effect on how your brakes perform then you definitely want to get the issue fixed as soon as you can because driving with bad brakes is a serious safety concern. Getting your brakes repaired is usually done per axle. The squeak is probably only coming from one axle or another, but if it’s happening in both front tires and rear tires then you’re going to have to replace everything which will double your costs.

The average cost of replacing brake pads is $150 to $300 per axle. This will of course heavily depend on not just the type of brake pads you choose but the make, model, and year of your vehicle. For instance, some BMW dealers might charge you between $1,500 and $2,000 to replace the pads, rotors, and sensors in your brakes.

The sound of your car squeaking unexpectedly you can be both jarring and bothersome. When it’s caused by a problem in your brakes this is definitely something you need to take seriously. Taking risks with your brakes is never a good idea, so you need to find out as soon as you can if it’s either a simple problem such as the presence of moisture causing it that will go away as they dry out, or a more serious problem like failing brake pads or maybe your calipers are misaligned or something like that.

Whatever is causing the problem, just make sure you get it looked at as soon as possible in order to keep yourself safe and the other drivers on the road as well. Remember that the sound may just be annoying rather than something indicative of a serious problem that you need to deal with.