How Much Does Rust Repair Cost? Here’s Everything You Need to Know! 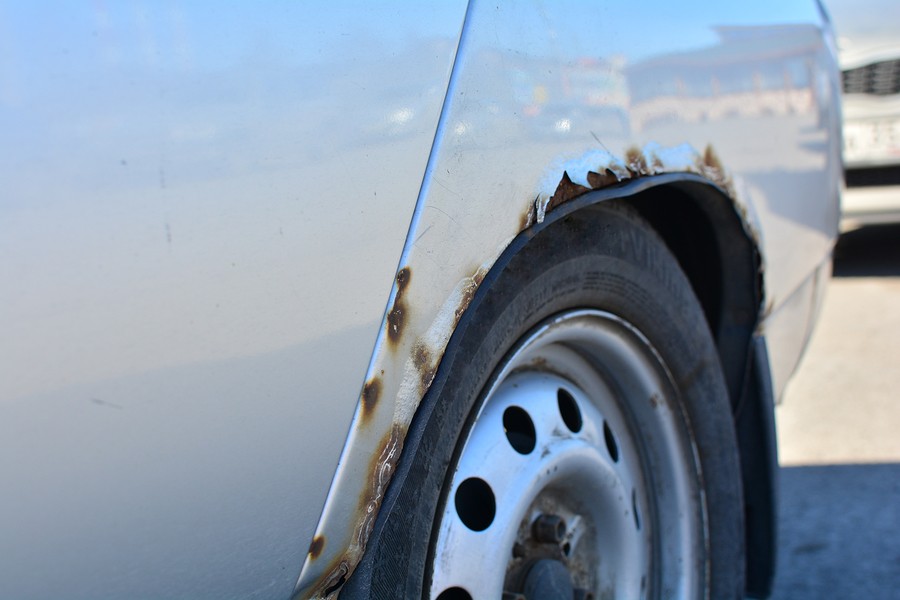 Rust is almost inevitable for any car on a long enough timeline, though newer cars are definitely more resistant thanks to all the polymers used in them. Despite advances though, you can’t outrun rust forever. If it gets bad enough you will need to do something about it and that means you need to know what the rust repair cost is going to set you back. Rust repairs can cost as little as $20 and get as high as $2000 or more depending on the extent of the damage and how thoroughly you want to repair it.

As much as we take rust for granted not everyone seems to understand exactly what causes it in the first place. Rust is caused when the metal that contains iron in your car is exposed to moisture and begins to oxidize. Iron, the main component of the steel that the frame of your car is likely made from, and depending on the make and model of your car many other parts as well, reacts very readily with oxygen. That is why the term for rusting is oxidation. Moisture speeds this process up.

Salt also increases the chemical reaction that leads to oxidation so if you live in a part of the world where roads are salted during the winter months then the metal in your car is at greater risk of faster and more extensive rusting.

Because keeping your car away from moisture is literally impossible, rust is often an unavoidable concern for drivers to have to deal with. There are ways to prevent it before it happens and repair it after it happens, however. Let’s take a look at some of them.

What You Need to Know About Repairing Rust

The thing about rust repairs is that they can be unpredictable, and they are hard to categorize in terms of cost. Your car could have one rust spot at the edge of a side panel or the entire frame could be corroding. How much it will cost to repair will very much be based on the location of the rust, the amount of rust and, to some degree, the make and model of your car.

You can buy a Bondo repair kit at AutoZone for only $20 that will allow you to patch a small rust hole. This option is really only good for very minor rust spots and holes on the body of your car and should be avoided for extensive rusty or rusting of the frame, as that will require a more involved solution.

If you’re not entirely comfortable trying it yourself you can get a mechanic to do the same work, just know that the labor cost will at least double the overall total, and likely will cost even more than that.

Major rust repair costs are going to be very high relative to those small ones you can fix yourself. For instance, a new quarter panel can cost anywhere from $400 to $1000. Bumpers can get close to $2000 and so on. Any of these parts, if rusted out, could be very costly to replace.

If your car is rusted so extensively that it’s not cost-effective to even try to repair it, there’s always a chance you can salvage some value by selling it as a junker.

Fixing Rust On Your Own

Fixing rust on your own is a good way to save money on rust repairs if you can catch it before it becomes an issue that is beyond your ability to handle. You'll need a handful of supplies to get this done at home including;

If you plan to fix a rust spot on your car and paint over it, you need to accurately match your car’ paint job. Just buying red or black paint is not going to cut it if you want this to look good. Fortunately, all automobile paints have a paint code. You’ll need to find your paint code and match it to the touch up paint to ensure it looks as good as new when you’re done.

If there are any parts you are unsure of, there are many videos on YouTube that can guide you step-by-step so you can see it yourself. This removes a lot of the guesswork and should help your confidence if you’re new to this kind of work.

As you can see this process requires a number of materials that may cost you at the very least $100 and will also require a significant investment in time as well. If any steps go wrong, especially that clear coat, this process can take up to three days to complete. So, dealing with rust, if you want it perfectly repaired, is much more in depth than it at first seems. With that in mind, you want to do what you can to prevent rust as much as you possibly can. This is the best way to save time and money on rust-related repairs down the road.

How to Prevent Rust

The most obvious way to prevent rust that most of us have heard of is the application of a rust coating which you can have done at many body shops and mechanics. Rust proofing is usually sprayed under the car to protect the bottom, which would naturally have the most exposure to water and salt as you drive. In general, you can invest in two kinds of rust proofing for your car.

A second aspect of the permanent rust proofing that many cars will receive is a paraffin-based sealant such as ZeeGuard. It protects against water, mud and salt and will last several years.

You can expect to pay about $500 or so to get a permanent rust proofing done at a shop which seems steep, but if this is a new car you’re looking at upwards of 10 years of rust protection, which makes the expense more than reasonable.

Keep your car clean. Wash it regularly at a touchless car wash so you can spray under the car and get into the cracks and crevices where mud and dirt will accumulate and start the corrosion process. The cleaner your car is, the less likely it will be to rust.

Clean your mats. A lot of people overlook this, but the floor mats can remain wet for a long time, soaking through and eventually rusting out the floor of your vehicles.

The cost of repairing rust damage can get fairly extensive if it’s been allowed to go for a considerable period of time, but with a little maintenance, it doesn't need to be so extreme.

PrevPreviousFuel Induction Service: What Is It?
NextWhy Is My Car Leaking Oil When Parked? Here’s Everything You Need to Know!Next