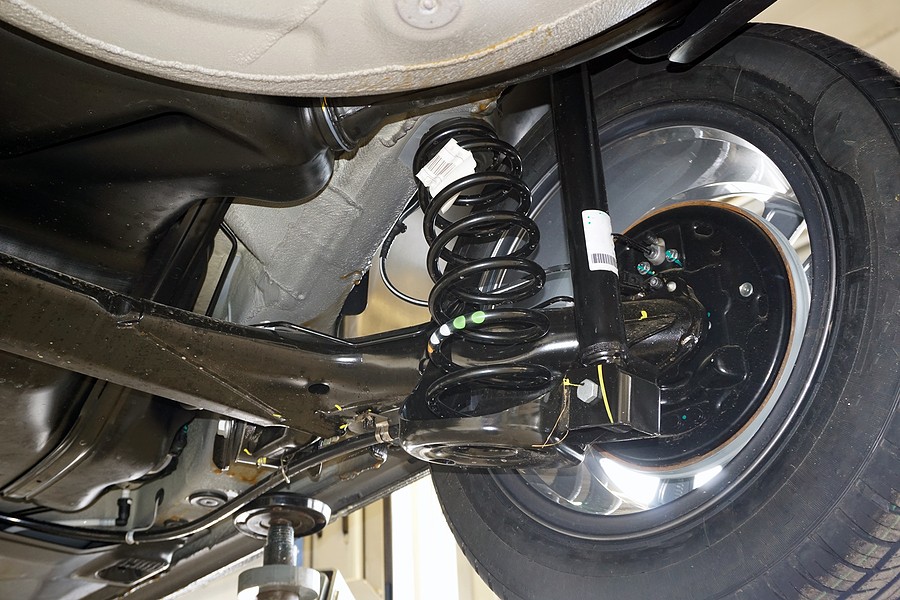 When you’re driving around in your car, you probably don’t spend a whole lot of time thinking about how important your suspension system is to it. But if one of the components of your suspension ever goes kaput, you’ll quickly see just how essential the system is to your car. You’ll be bouncing around all over the place inside your car if your suspension isn’t working properly. It’s why you need to keep a close eye on the shocks and struts that make up your suspension system and replace them as necessary. Today, we’re going to take a few minutes to discuss the importance of the rear shocks in a car and to find out more about what the rear shock replacement cost will be when yours go bad on you one day.

What Are Rear Shocks?

First things first: We would like to point out that not every car has rear shocks. The suspension system in every car is different, which helps explain why some cars have rear shocks and some don’t. But if your car is equipped with them, they play an important role in your car’s overall well-being. They’re responsible for helping to control the springs in your car while limiting the amount of movement that your suspension as a whole is able to do.

As you can imagine, this means that you need to make it a point to maintain your car’s rear shocks and replace them as necessary. The rear shock replacement cost isn’t going to be particularly cheap, but it will be vital when it comes to keeping your car running in the right way. You could put other elements of your suspension system and your car as a whole at risk if you don’t take the right approach to caring for your shocks.

What Is the Difference Between Rear Shocks and Struts?

Earlier, we briefly alluded to the importance of the struts in your car. These are another vital part of your car’s suspension system. But unfortunately, there are some people who think that shocks and struts are the same thing. This couldn’t be any further from the truth. You should understand the differences between the two so that you don’t mix them up.

The struts in your car are in charge of supporting the weight of your vehicle. This is not something that your shocks are called on to do. Additionally, your struts serve an important role in your car’s steering system, which is another thing that your shocks don’t do. Your struts are designed to pivot when you turn your steering wheel so that they can stabilize your car and all the weight that comes along with it as you make a turn.

Shocks aren’t designed to support all of the weight that your vehicle has to offer. Instead, they stick to doing what they do as part of your suspension system. They control the springs in this system and dampen your vehicle’s weight as it moves up and down while driving down the road. They do work in conjunction with your car’s struts, but your shocks aren’t doing the same thing as struts do when you’re driving down the street. It’s why they don’t always wear out at the same rate as struts.

How Do Rear Shocks Work?

Despite the confusion that sometimes surrounds shocks, it’s actually not that difficult to understand how they work within the context of your suspension system. More often than not, your rear shocks have coil springs wrapped around them that hold up the weight of your vehicle and absorb most of it as you’re driving around in your car. But when the weight is too much for the coil springs to take, your rear shocks will spring into action and help to lighten the load on them.

Your rear shocks run through the center of these coil springs and absorb any vibrations that come their way. By doing this, they reduce the amount of movement that you feel when you hit a pothole, drive over a speed bump, or just get stuck on a particularly rocky road. They also provide your car with a stability that it wouldn’t have otherwise without your rear shocks in place.

Rear shocks can take a real beating over time and keep on ticking. But eventually, you will need to pay the rear shock replacement cost when your shocks fail you. They aren’t going to last you forever, especially when you drive over rocky terrains on a regular basis or subject them to one too many potholes. It’ll be up to you to limit the abuse that they take on while you’re behind the wheel of your car.

How Long Will Rear Shocks Last?

It’s not always easy to tell how long rear shocks are going to last before they give out on you. It depends on a bunch of different factors, which is why it can be challenging to budget for the rear shock replacement cost. Generally speaking, you should be able to get between 50,000 and 100,000 miles out of rear shocks before they need to be replaced, but it can vary quite a bit for people.

Either way, it’s almost always a good idea to repair rear shocks in pairs so that they wear evenly while providing your car with the protection that it needs. It might cost you more to replace them in this way, but it’ll be well worth it in the end as far as ensuring that your car is comfortable when you’re driving it.

What Are the Signs of Bad Rear Shocks?

When you have rear shocks in your car that are on their way out, it’s not going to be too hard to tell. There are some surefire signs that will let you know that you need to replace your rear shocks ASAP and pay the rear shock replacement cost that will come along with doing it. They shouldn’t be too tough to spot when you know what to look for.

For starters, bad rear shocks will often make loud noises when you’re driving your car. You shouldn’t ever ignore these noises if they pop up out of nowhere. There are also other signs that will indicate bad rear shocks, including:

Overall, if your car isn’t as comfortable as it used to be, it typically means that there is something going on with your suspension system. You might need to plan to pay the rear shock replacement cost soon, or you might need to think about replacing something else in your system. It’s important to get to the bottom of it right away.

Should You Continue to Drive in a Car With Bad Rear Shocks?

When your car’s rear shocks first start to go bad on you, you might be able to keep on driving it around without worrying about it too much. But before long, you’re going to begin to feel every single bump in the road, which will make your car super uncomfortable. You’ll also find that your car might be a little harder to control than usual since bad rear shocks can affect the way in which your car steers.

There are also more serious issues that can pop up if you don’t shoulder the rear shock replacement cost and get new shocks installed in your car. You could do irreparable damage to your tires. You could also completely lose control of your car at some point and cause it to rollover. For these reasons, you should put off rear shock replacement for any longer than you absolutely have to.

Who Should You Hire to Replace Rear Shocks?

If you need to replace the rear shocks in your car, you might be thinking about trying to do it on your own to save yourself some money. This is always never a good idea if you’re not someone who has experience working on cars. Instead, you should bring an ASE-certified mechanic to lend a helping hand with it. Although this will bring the rear shock replacement cost up, it’ll also prove to be worth it when everything is all said and done.

An experienced mechanic can get your car up off the ground, remove your bad rear shocks, and install new rear shocks in a hurry. They can also make sure your new rear shocks are put into place properly to prevent damage from being done to other aspects of your suspension system.

How Much Does Rear Shock Replacement Cost?

As we mentioned a few moments ago, the rear shock replacement cost is going to set you back quite a bit of money when you need to have it done. It’s definitely not one of the most affordable auto repairs around. But you shouldn’t let that stop you from replacing rear shocks anyway when the time comes.

There are also usually a few other smaller repairs that will need to be done to your suspension system when you have rear shocks replaced. This could drive the price up higher than it already is and make you question whether or not it makes sense to do it.

Will Rear Shock Replacement Prove to Be Worth It?

It’s obviously going to cost you a nice chunk of change to replace the rear shocks in your car. This might lead you to ask, “Is paying the price to have this done really worth it?” It’s a good question, and it’s one that you should think about prior to pulling the trigger on rear shock replacement.

If you’re going to keep your car for at least a couple more years, then the answer to the question we just posed should be a no-brainer. You can’t drive around with rear shocks for an extended period of time. You’ll have no choice but to pay the rear shock replacement cost.

But if your car isn’t worth a whole lot of money and doesn’t have a ton of life left in it, then taking on the rear shock replacement cost might not be in your best interests. It could be a better idea for you to sell your car rather than trying to replace such expensive parts. The rear shock replacement cost isn’t going to be worth it to everyone.

Is Selling a Car With Bad Rear Shocks a Possibility?

Do you have an old car with bad rear shocks that you don’t want anymore? You might not think it would be worth trying to sell it. But believe it or not, junk car buyers would be more than happy to buy your car from you and pay you cash for it. They won’t have any problem picking your car off and hauling it away so that you don’t have to worry about taking on the rear shock replacement cost.

Want to find out more about how it works? Cash Cars Buyer can help you steer clear of the rear shock replacement cost by walking you through the process and putting cash right into your pocket. Call on us for help today to get rid of a car with bad rear shocks.