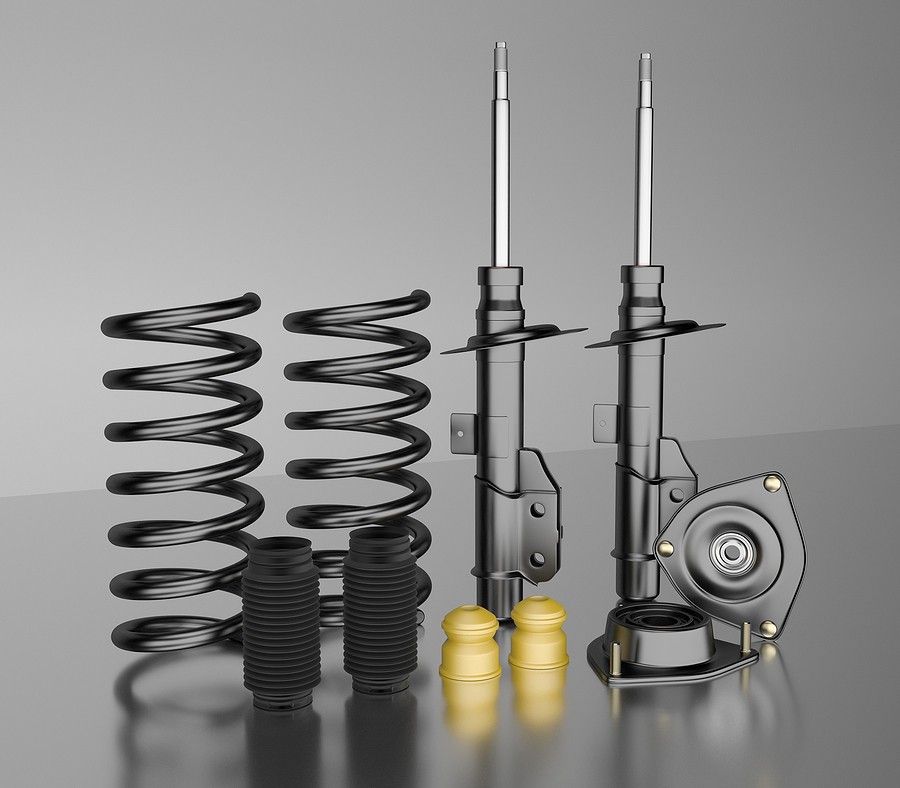 Riding along hilly or rough roads can be a hell of a joy ride. You feel your body bounce and sway with thrill and excitement at every bump but not when you’re thinking about your car’s suspension. And it’s even worse when you’re supposed to be cruising along a smooth highway but you’re still feeling like you’re operating a jackhammer. That’s a major cause to be alarmed.  When this kind of thing happens then you can be sure there’s already a problem with your car’s shocks and struts. Shocks and struts are two distinct items that are part of your car’s suspension system.

The components that make up the car’s suspension include the chassis, the spring coils that bear the weight of the car, and the shock absorbers that shield the springs any time you walk over the hump. The struts, along with the anti-sway bar, are also part of the suspension. The struts provide structural protection for the needs of the car and provide a stable structure and body for the engine.

The anti-sway bar helps to move the wheels and holds the car steady, particularly when turning around corners. The tires are also a part of the suspension, and it is important to keep them in good condition, too. Your car is a machine that generates a great amount of vibrations, force and inertia so it requires structural balance and this is what the car’s suspension system provides.

SO WHAT ARE SHOCKS?

Despite what is commonly believed, a typical shock absorber does not support vehicle weight. What it actually does is control the spring and suspension movement. This is being done by this component by turning the suspension’s movement from kinetic to energy into thermal or heat energy, to be dissipated by the hydraulic fluid.

Shock absorbers are essentially oil pumps. Attached to the end of the piston rod is a piston that works in opposition to the hydraulic fluid in the pressure tube. As the suspension goes up and down, the hydraulic fluid is pressed through orifices, which are  tiny holes inside the piston. However, these orifices only let small amounts of fluid through the piston. This slows down the piston, slowing down the spring and suspension movement as well.

The strut is a common form of damper found in many of today's stand-alone suspension, front-wheel drive vehicles as well as some rear-wheel drive cars.

Struts also performs another task. Unlike shock absorbers, struts give structural support for the car’s suspension. They also hold the tire in an aligned position and support the spring. Moreover, they support much of the side load placed on the car's suspension. With this, struts have an effect on riding comfortability and handling. They also affect vehicle control, steering, wheel alignment and wear, braking and on other suspension

The biggest difference between shocks and struts is that a strut is a structural part of the car's suspension system where a shock is not. A strut is also a critical part of the car’s steering system and greatly affects alignment angles. A strut is also a central point for the car’s steering system and contains a coil spring, and it is due to this fact that an alignment is always needed when having to replace a strut. This is also the why struts are typically more expensive than shocks

In simple terms shocks and struts in general are responsible for holding the body of the vehicle off the road, pressing the tires to the pavement, preventing you from hitting your head on the car ceiling as you traverse every bump in the road. The most typical combination is to have struts on the front and shocks on the back wheels.

Defective shocks or struts will make it difficult to maintain proper control of your car as you drive. As a result, going over a bump or pothole can potentially cause you not only to hit your head but also to lose control, putting you and your passengers in grave danger, as well as risking an accident with other vehicles on the road.

So you can only imagine how important it is to maintain properly functioning shocks and struts to prevent your car from bouncing all over whenever you come across rugged terrain or even a newly paved highway. Excessive vibrations and noise while driving and alignment problems also causes unnecessary wear and other damage to your car.

Whenever tires and other parts of the vehicle become damaged the car owner can easily see it. When brakes get worn out he can also hear it. But awareness of shock and strut wear can be very low. With no obvious visual or audible signs an average car owner can remain completely oblivious of shock or strut damage or other suspension issues for many days, months and even years until told differently by a car expert.

But there is one obvious sign that you need to have your shocks or struts inspected or replaced and that is experiencing a bumpy ride. And not only that you just need to be aware of them and here are other important car symptoms to look out for

So before irreparable damage occurs what can you actually do to maintain the shocks and struts of your vehicle.

As with anything timely detection of shocks and strut issues and immediate response can save you money and time down the road. Oftentimes it is best to leave the mechanical work to a professional when dealing with the car’s suspension, specifically the shocks and struts; however, it is still a big advantage if you know how to keep an eye on the problems that might indicate that it needs work. If you see any signs that the suspension is not working as it should, it is best to bring your car to a trusted mechanic as soon as possible. Have the issues repaired as soon as possible before any irreversible damage happens.

Tires are an important part of the suspension, and it is a must to keep them sufficiently inflated. Failure to do so will make the tires wear out prematurely and that will also affect all the other components of the suspension, including the shocks and struts. Also regularly rotate the tires to help even out the wear and tear and have the wheels adjusted on schedule.

3. Have them inspected and tested at least once every year or every 12, 000 miles.

This is true with the rest of the other parts of the suspension system. Start testing with the vehicle on the ground, and not while it’s being supported on a hoist or a jack. Proceed by bouncing the vehicle at every corner and then release. If it bounces for more than 11/2 times after stopping then have a professional take a closer look at the shocks or struts.

4. Keep in mind that shocks and struts should always be replaced or installed in pairs.

Since all shocks and struts on a car are exposed to roughly the same amount of wear and abuse, replacement of all four makes more sense when one is already damaged.

5. Always do your part in protecting your car suspension system by driving carefully.

Avoid haphazardly driving over potholes or over uneven surfaces. If a road is notorious for being rough on vehicles avoid the area if you could. Avoid putting your car through unnecessary stress as much as you can. This will not only help extend the lifespan of your suspension system but the vehicle as a whole.

6. Lessen exposure to elements that may cause corrosion.

In addition to the unavoidable wear and tear from performing their typical functions, shocks and struts are also exposed to water, road salt and other chemicals that can cause corrosion further quickening the timetable for its repair or replacement. So do your part in somehow lessening exposure to these elements that may cause your car parts to deteriorate more quickly than it normally would.

It typically takes 50,000 miles before it’s time to replace both your shocks and your struts. “Typically” because depending on how well you maintain your car and your driving habits it can actually dip to only 40, 000 miles or if you’re on top of things you could extend the usage up to 75,000 miles.