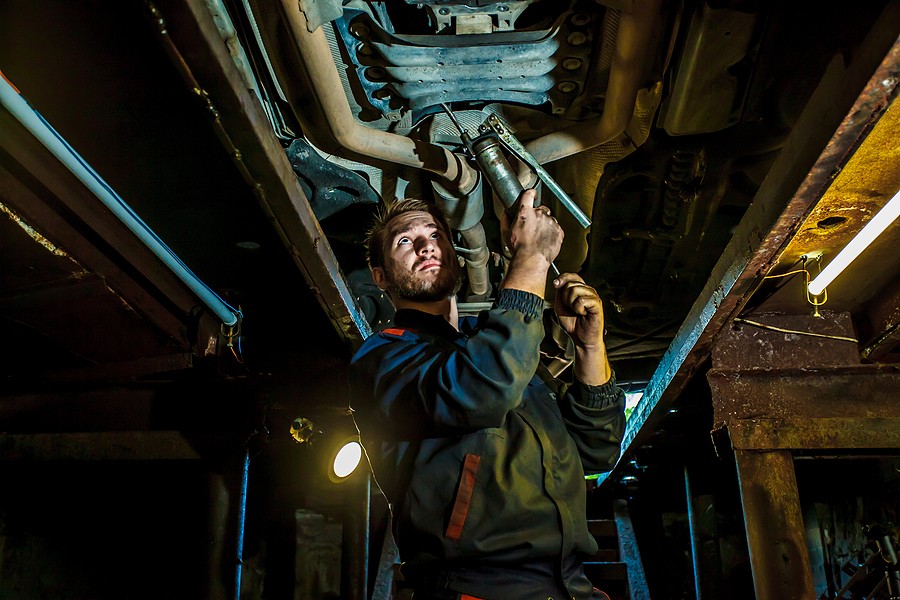 When trying to figure out what the problem is in your vehicle, it is important to know the onset of the issue and where it is coming from. If you hear a rattling noise coming from underneath your car, this is usually a problem with the suspension or the exhaust system. In order to figure out the root cause of the issue, you need to do some digging. Thankfully for you, we have done the research for you. Keep reading to figure out why the rattle noise under your car might be happening, where it is coming from, and what you can do to solve the issue.

The car’s exhaust system is the piping that is used to redirect and guide the reaction exhaust gases away from the combustion source inside of the internal combustion engine. The entire system in your vehicle is in charge of turning burnt gases from the engine into usable gases, and typically includes multiple exhaust pipes to release the burnt gas. Keeping this system in a good working condition is extremely key to the car’s fuel mileage, the environment, and your safety, and to prevent the rattle noise under the car.

Most drivers have experienced a curious and concerning noise coming from their car. A rattle noise under the car is no different. It’s always a little nerve wracking, because you are thinking of the worst possible scenario when something is wrong with your vehicle. Some of these noises have simple fixes, while others have more serious and severe concerns. Responding in the right way can help you prevent any problems from worsening over time.

Potential causes of the rattle noise

Unfortunately for you, the rattling noise coming from underneath our car can be due to a variety of reasons, and most often does not boil down to one simple, and easy to diagnose cause. Rattling noises can occur when you first start your car and turn the key in the ignition. They can also be most prevalent when you drive the vehicle and you try to accelerate to high speeds. Lastly, the rattle noise under the car can occur when you try to press on the brake and stop your car quickly.

Other times that you might hear a rattle noise under the car is when the car is specifically accelerating or decelerating, since this is putting more strain on the transmission and the engine. Also, if you notice that the rattle noise under the car more frequently occurs when your car goes over bumps, rounds a tight corner, or during some tough driving, this can be a clue as to the real cause of the issue.

Some types of rattles from under the car are easily traceable and fixable, making it a relatively inexpensive solution and fix for your car. However, some of the rattles from under your car can be the very last minute warning system of a mechanical failure that is about to happen. No matter if the issue is serious or not you need to figure it out in order to keep your car running smoothly.

Where is the rattle in the car coming from?

The first step towards dealing with a rattling noise in your car is to figure out where the noise is coming from. Is the rattle from under the car, or is it from a different location? This can help you or the mechanic find the source of the noise and determine where the problem is coming from and what parts to look at. To simplify this check-up process, we have broken down the possible options of locations that the rattle noise will usually come from.

Rattling noises that are coming from underneath of your car and the bottom of your vehicle might be especially noticeable to the driver upon first starting the car, while driving at specific speeds, either very high or very low, when you hit a bump or pothole in the road, or even consistently while you are driving down the road. There are some possible sources and root causes as to where the rattling noises underneath of your vehicle are coming from.

Your exhaust system is a key part of the running of your vehicle and the fuel system. Your exhaust system spans the length of the engine in your car to the rear of your vehicle. It is made up of various components that include the catalytic converter, the muffler, and the exhaust pipe. The catalytic converter is the exhaust emission control device that is in charge of reducing the amount of toxic gas and pollutants that occur in the exhaust gas after being produced from the internal combustion engine.

The car’s muffler has a main function of the exhaust system of the vehicle’s engine. The muffler reduces the amount of noise produced by your engine, and also is the main part in charge of controlling the backpressure of the engine, improving the longevity of the mechanism and the performance of your car.

Over time, these components, the muffler, the exhaust pipe, and the catalytic converter can wear down, causing a rattle noise from under the car. If the joints wear down and become damaged along with the parts, the joints can actually loosen over time. This can cause the rattling noise that you will hear from under the vehicle.

In addition, the exhaust noise might be louder than is when you are driving your cars. This rattle noise under the car can appear to come from under the car instead of the rear of the vehicle, showing that the exhaust pipe can be a clear cause of the rattling noise.

If this is the case and you have noticed and diagnosed that the rattling noise is under your car, this can be solved by having your exhaust system checked by a local mechanic or an auto body shop. You might be surprised that the fix could be pretty easy, and just require the mechanic to check the connections and tighten a loose clamp or replace a damaged hanger.

However, it is also possible that you might have to replace a section of rusted pipe or the muffler altogether. Even though this is a more extensive repair, it is still relatively fast and inexpensive when compared to other common repairs and replacements in your car. The price of replacing a muffler can cost $100 on the low end of the price spectrum and around $400 to $500 on the high end of the price spectrum. In addition, the labor charges are an average of $50 to $100 for the labor depending on the make, model, and year of the vehicle.

Another sign and cause of the rattling noise from under your card could be due to a bad catalytic converter. As we know, thi part is a crucial piece to your exhaust system, since it is in charge of the emissions and controls the output of the gases. This is the piece that converts the toxic gases from the exhaust and pollutants into less dangerous substances that can be reused.

The catalytic converter can be damaged over time by extensive wear and thermal shock or a sudden impact, which can result in a piece of the internal structure breaking off – and hence, causing a rattle under your car. In more extreme cases of damage, this can sound very loud and be extremely noticeable while you are driving.

The solution to the catalytic converter failure is to determine where the original cause of concern is coming from and what caused it to fail and the rattle noise under the car. Keep in mind that the converter itself can be a very expensive piece, depending on what shop you go to, where you live, and the make, model, and year of your car.

The final reason that you could be hearing a rattle noise under your car is that the heat shielding in your vehicle is loose or rusted after prolonged use. As emissions regulations have gotten much stricter over the years, engines and exhaust systems are needing to operate at a higher level and higher temperatures.

This has caused the need for heat shielding on various exhaust components in your vehicle, like the mufflers, catalytic converters, and exhaust piping, a key part of your exhaust system. The role of the heat shield in your car is to reflect and counteract the intensity of the heat that is emitted from the exhaust system away from the bottom of the vehicle to prevent any rattle noise under the car.

The heat shields are components that are made of thin pieces of metal and are placed between these components and on the underside of the vehicle. This mechanism is commonplace in modern cars on the market today, so they can be a sure cause of the rattling noise under the car. Over a prolonged period of time, the heat shields can rust out or become detached from the mountings, causing the rattle.

The solution to this issue is to check the heat shields under the car for their condition, any damage, and see if there are any loose connections or corrosion that has occurred. If this is the case, tighten the heat shields if they are loose or get them replaced if the corrosion has caused the initial structure and the integrity to be damaged.

How To Fix Rattle Noise Under Car

If you hear a clunk when the suspension goes over unstable terrain or bmps in the road, this could potentially be the cause of excessive clearance in a joint due to wear over time and looseness that has formed over years or months of use. This could be just as simple as  a loose or unstable nut on the strut, or something more serious and subtle that takes some diagnosing.

First, before you go ahead and try to fix the issue, you need to search online for any technical service bulletins for your car that might directly pertain to the specific noise you are hearing. These bulletins are basically warnings that are issued by automakers that include the known probes for various models and model years. There are several sites you can check out and look for your specific VIN number.

Suspension clatter is a common problem with various model cars and can generate a lot of technical service bulletins. This initial cause can be the cause of the rattle noise under the car.

If none of these clues are telling you where the rattle noise under the car is coming from, you are going to need to go hands on and find out the real issue. Pop the hood and have a helper press down on the bumper or the fender to see if the suspension is really working. By listening carefully, you can determine where the issue is coming from and emine the upper strut or shock mounts.