What is The Catalytic Converter Replacement Cost? Everything You Need To Know 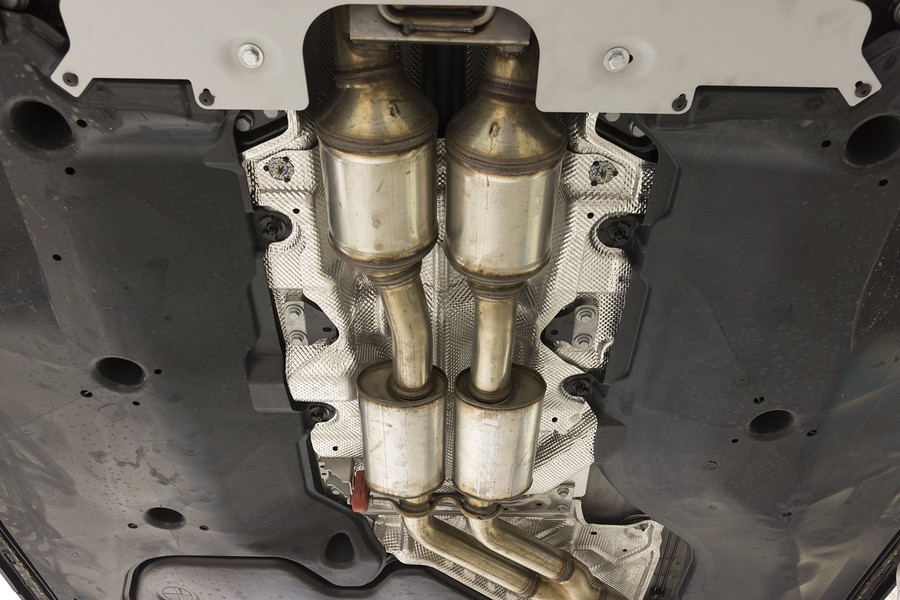 Maybe you’ve recently noticed a funny smell from your car’s exhaust, or perhaps your fuel economy has taken a sudden drop.

Whatever the case, you’re wondering if the catalytic converter is the culprit as you count and recount the pennys in your piggy bank.

Unfortunately, if you do end up having to replace the catalytic converter in your car, it’s likely to be a fairly costly exercise…

What Is A Catalytic Converter?

A catalytic converter (sometimes called a cat converter or simply just a cat) is an emissions control device that sits in the exhaust of most vehicles.

Internal combustion engines produce a number of highly toxic gases as a byproduct of their design, and these are incredibly harmful to our environment. Catalytic converters work to reduce these toxic gases and pollutants and turn them into less toxic gases. These gases are the ones that eventually exit out of your tailpipe.

They look very similar to exhaust mufflers from the outside, but on the inside they are completely different. The inside of a catalytic converter is a honeycomb structure made up of different particles such as platinum, palladium, and rhodium, which the exhaust gases pass through and interact with, thereby reducing their toxicity.

How Do Catalytic Converters Work?

So we know that catalytic converters turn highly toxic exhaust gases into less harmful ones, but how exactly do they do that? What kind of voodoo magic is going on in these little devices?

Catalytic converters are actually of a pretty simple design, there aren’t any moving parts, and no fancy computer tech here. Inside a cat converter is a ceramic honeycomb component, which is coated in the catalyst particles (a combination of platinum, palladium, and rhodium).

When the vehicle operates, exhaust gases flow through the catalytic converter and three harmful compounds (hydrocarbons, nitrogen oxides, and carbon monoxide) are superheated, and react with the catalyst which turns them into far less harmful emissions.

What's So Bad About Exhaust Gases?

Before 1975, catalytic converters were not common place equipment. Unfortunately, many of the vehicles manufactured during this time were big-engined muscle cars, which wreaked havoc on our environment and dramatically reduced the quality of our breathing air.

There are three main harmful compounds in exhaust gas that catalytic converters work to reduce.

So why are all of these compounds so harmful?

Carbon monoxide is a poison for any of us who breathe air. Yes, that’s pretty much every animal on the planet, including humans.

So, it’s pretty clear we don’t want any of these gases in our air, and with so many vehicles on the road today contributing to this, catalytic converters are extremely important!

What Happens To The Harmful Gases?

By now you’re probably thinking, but where do they go? There are still gases coming out of my tailpipe…

Yes, there are, and though these gases are still not amazing for our earth, they are far far less harmful – up to 90% of a vehicle’s harmful tailpipe emissions are reduced through the use of a catalytic converter.

The carbon monoxide gases react with the catalyst particles and turn into carbon dioxide, which is what humans and animals exhale and can be processed by trees.

Hydrocarbons break down and turn into carbon dioxide and water, and the nitrogen oxides are separated in the cat converted and turned back into nitrogen and oxygen particles. Win, win, win!

Where Is My Catalytic Converter?

The catalytic converter sits underneath your car in your exhaust system. It’s typically installed in the middle of the exhaust pipe, and is placed between the exhaust manifold and the muffler.

It’s generally welded into the exhaust pipe from the factory, with many replacement cat converters being clamped in place.

How Do I Know If Something Is Wrong With My Catalytic Converter?

There are a few signs that could indicate if your cat converter has gone bad, here’s what to look for:

1 – Your Car Failed Its Emissions Test

In many American states emissions testing is a compulsory, regular activity for all vehicle owners. If your cat converter isn’t working properly, then your car is likely to be emitting more exhaust gases than it should be.

2 – Your Engine Check Light Is On

An engine check light can be a number of things, and because modern vehicles are so complex it would be impractical to have a light on the dash for every single thing that could go wrong!

If your catalytic converter has gone bad, the oxygen sensor (a.k.a o2 sensor) in your exhaust stream could be sending a signal to your ECU (engine control unit) to tell it that something is wrong. This would cause your engine check light to come on, which is a signal to head your local garage.

The only real way to know if the engine check light is related to poor catalytic converter performance is to take your car in for a diagnostics test. A mechanic will connect their diagnostics tool to your vehicle which will scan the ECU for error codes and tell you exactly what’s wrong.

Though your engine check light being on isn’t necessarily an indicator that you have a bad cat, if you’re also experiencing one of the next few symptoms, it could be a pretty good sign…

3 – Your Exhaust Is Making A Rotten Egg Smell

There is a small amount of sulfur in the fuel your car uses, and the smell of rotten eggs is often due to a compound called hydrogen sulfide. Typically this is converted into sulfur dioxide which is odorless, but when the cat converter isn’t working properly this doesn’t happen.

This results in hydrogen sulfide exiting the exhaust pipe and creates a horrible rotten egg smell.

One cause of a catalytic converter failure is an excess of carbon buildup in the honeycomb design. This can cause a partial blockage in the cat, which has negative effects on your vehicle’s performance.

Internal combustion engines rely on airflow (as well as fuel and ignition) to operate. When the cat converter is blocked, it creates an improper amount of backpressure in the exhaust system, which compromises airflow.

So, if you notice your car feeling a little underpowered next time you put your foot down to overtake, the catalytic converter could be your issue.

Gas is pretty expensive these days, so even small changes in your car’s fuel economy can have significant effects at the pump, and on your wallet.

If your catalytic converter is blocked up, then your engine won’t be getting the airflow it needs to function properly, and it will be working harder to make the same power, which means pumping in more fuel.

It’s like having to run uphill, all of a sudden you have to put in a tonne more energy just to achieve the same speed and distance.

What Are The Causes Of Catalytic Converter Failure?

Catalytic converters don’t use any moving parts, so you’d think they’d last a lifetime right? Well, the truth is that they can, and they are typically designed to last the 10-15 year lifespan of a car.

The thing is, this assumes that the other components of the vehicle are all functioning perfectly, which of course isn’t always the case. The parts in your vehicle are all interlinked, and if one fails to operate properly, it can have negative effects on another.

Secondly, it also assumes that you won’t be using the car after 15 years! In 2019, the average age of a vehicle in the US was almost 12 years old, which means a huge proportion of cars on the road are well over the 15 year mark.

Aside from general aging though, there are a few other causes of cat converter failure:

How Much Does It Cost To Replace A Catalytic Converter?

As with many vehicle repairs, the cost of replacing a catalytic converter can vary tremendously, depending on a number of factors such as:

Your Vehicle Make And Model

If you own a ‘93 Toyota Corolla, chances are your cat converter replacement is going to cost a lot less than if you had an ‘05 Jaguar XK8. Depending on the model you own, the cost of the unit itself could be a few hundred bucks, or it could be a couple thousand.

The Quality Of The Replacement Unit

Not all catalytic converters are created equal. You can purchase a universal fit cat for under $100, or spend upwards of $1000 on a direct fit unit that is purpose built for your vehicle.

There can also be a huge difference in the internal design of a cat converter. What makes them so expensive is the use of precious metals (palladium, platinum) as a catalyst, that’s why catalytic converters are often the victims of theft.

Cheaper units typically have a much lower density of these particles, which obviously make them less efficient and more prone to a quick failure. More expensive units by contrast have a high catalyst density, often up to 6x as much as their budget counterparts.

Typical labor costs can be anywhere for $70-$130 an hour, so a more budget-friendly garage can make this repair a lot less costly.

There’s also the amount of time required to replace the cat converter, which is different for every car. It depends very much on placement, accessibility, and what your mechanic needs to do to replace the unit. They may need to cut out the old welded cat, and clamp in a new one.

On vehicles with dual exhaust systems, this could mean twice the labor cost, as well as the cost of parts!

Diagnosis And Repair Of Other Issues

You should also consider that there may be something else wrong with the vehicle that’s caused the catalytic converter to fail. For example if your spark plugs have fouled, or your oxygen sensor has failed, then you could be up for the cost of this fix too.

Though the cost can vary significantly, depending on your choice of cat quality, and of course the type of vehicle you own, cat converter replacements are typically in the range of $1000-2500.

If you have a rare or speciality vehicle, you could be looking at significantly more…

Is A Catalytic Converter Replacement Worth It?

Depending on the value of your vehicle, it might not be worth replacing the catalytic converter at all. We certainly wouldn’t recommend driving around in a car with a faulty cat, but you may come to the conclusion that you’re better off selling your car for junk.

Luckily, we’re here to help. We buy any junk car manufactured between 2000 and 2018. Why not reach out to us here, and find out how much you could get for your car!?

PrevPreviousChevrolet Equinox Problems: What You Need to Know
NextBest Way To Get Cash For Junk Cars In IndianaNext