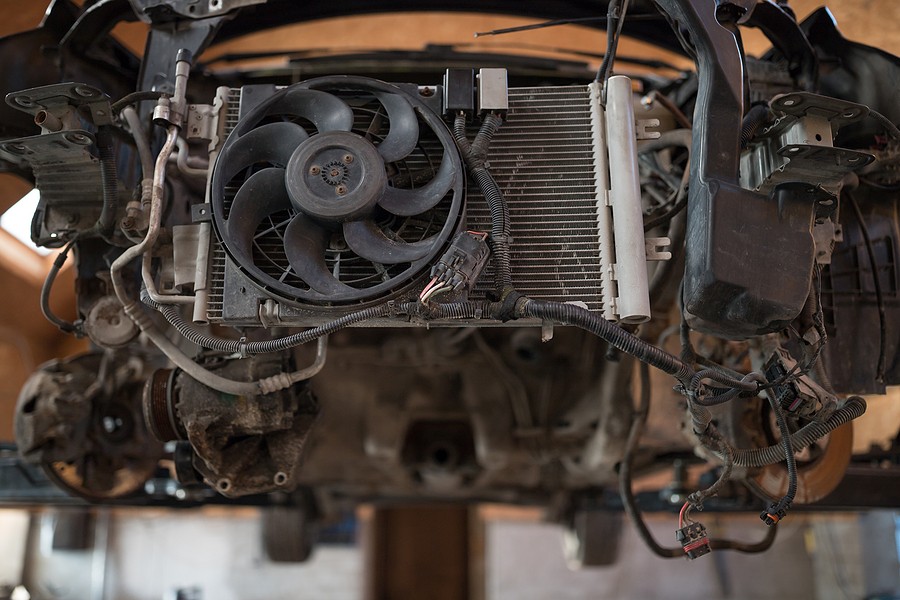 This airflow can account for up to 95% of the actual cooling provided by a radiator. A cooling fan provides the extra airflow that can prevent an engine from overheating when the vehicle is not moving and under significant load pressures. When your vehicle is going too slowly to acquire external airflow, or when you are stopped and air cannot pass through the grille, these cooling radiator fans come in handy.

What are the two radiator fans for?

Mechanical – It's common in older, rear-wheel-drive vehicles. Modern vehicles may also have mechanical radiator fans. Most radiator fans include an integrated clutch that allows the fan to idle when the engine is cold, conserving energy and power.

The built-in clutch will also be clever enough to rotate when the car is heated, detecting the temperature and operating accordingly. Mechanical radiator fans are frequently mounted near the engine in the water pump alley.

Electric – Modern vehicles nearly usually include this sort of radiator fan, which is powered by an electric motor. The engine's microprocessor controls when the radiator fan goes on and off, dictating its operation based on the vehicle's temperature.

It's a simple question of matching the right-sized cooling fan and radiator pair for your engine when it comes to choosing an electric radiator fan. Engines require heat to work successfully, but they also require adequate cooling to remove as much heat as needed, especially in high-performance applications

Not only on hot days, but all year round, a car's cooling system is critical to its performance. The cooling fan is mounted on the radiator in the front of the vehicle and draws air across the cooling unit to keep it cool. The radiator fans function by dissipating heat by dispersing your car coolant injected from the engine across a vast surface area.

On a hot day, the radiator's cooling ability is impaired, hence the cooling fan is required. The volume of air going over the radiator is drastically reduced when the cooling fan malfunctions, and the vehicle overheats. Internal combustion engines work by igniting controlled explosions inside the cylinders, pushing the piston downward. Each of these explosions generates a great deal of heat in the system, the majority of which escapes through the vehicle's exhaust.

Unless the temperature is controlled in some way, the metal in a motor will absorb heat and overheat. To absorb heat and cool the engine, coolant is poured into the motor through microscopic passageways. This coolant is then pumped to the radiator to be cooled before being put back into the engine. The process is straightforward, but if it is interrupted, it might result in disastrous failure.

When the cooling fluid is unable to discharge the heat, the temperature rises to the point where the motor can no longer function. In some situations, the heat can ignite fires or create internal engine damage that is irreversible. A little knowledge can be dangerous, but it is not in this case. The more you know about your car, the less likely you are to have a major problem in the future.

Although most people are aware that a vehicle is cooled by a radiator fan or cooling fan, it may surprise you to learn that a significant proportion of individuals are unaware. Understanding how a system works is the best method to avoid automotive problems in the future. It's also an excellent technique to guard against failures that may have been avoided.

Should radiator fans run all time?

Some vehicles feature radiator fans that run for a few minutes after the car has been turned off, primarily to keep the engine cool. However, if the fan is left on for a lengthy period of time, the fan may be damaged as a result of the misuse. When you turn your fan on, you're telling it to operate continuously 24 hours a day, seven days a week, regardless of the temperature setting. It's possible that a module or relay in your car will fail if overused.

The engine running hot is a symptom that your fan has been damaged. An engine that runs hot or overheats is one of the most prevalent signs of a damaged or malfunctioning cooling fan relay. Another common indicator of a potential problem with the cooling fan relay is non-functional cooling fans.

When the cooling fan relay fails, the coolant becomes too hot, and the car can overheat. The cooling fan relay replacement will cost on average $80-$160 and that depends on the type of car you have and the mechanic's fees. The labor fee will cost you around $70, while parts should cost $10-$50.

Under some circumstances, it is usual for the cooling fans to run continuously. They may be barely keeping up with demand and stay on if the car is heated enough. If the A/C is turned on, most cars will also operate the fans at a high speed.

Why is my radiator fan so loud?

Whether it's to enhance driver comfort or comply with increasing emissions regulations, reducing fan noise has become one of the most important considerations when designing engines.

If people can hear your fan before they can hear your engine, you have an overly loud fan. Excessive fan noise is more likely to be produced by mechanical clutch driven fans, which is mainly owing to a worn clutch inside the fan assembly. Both varieties are susceptible to a variety of problems.

You may need to remove the radiator, but the fan is usually accessible through the back of the radiator cover. Check for any loose debris that may have fallen between the blades and clean the fan. The most typical cause of a fan becoming noisy is this.

Can you drive with a bad radiator fan?

It is advised not to drive your car unless absolutely required when the radiator fans quit. When you do drive, though, keep an eye on the temperature gauge on your engine. High RPMS and greater strain on the engine, as well as prolonged idling and slow driving, will cause the temperature to rise faster.

As a result, it's best to drive cautiously and avoid idling if feasible. This allows heat to be dispersed through the radiator using regular external air flow without the use of a fan.

Electric motors in cooling fans are comparable to those used in industrial applications. Radiator cooling fans are frequently changeable and serviceable cooling system components, making them simple to repair when they break. The radiator fan creates air as it turns. Assume they eventually fail; their failure will have an impact on other engine components.  Here are the signs of broken radiator fans to watch out for:

Overheating of the Vehicle

Because engine overheat is a typical cooling system problem that can be caused by a variety of issues, you must diagnose or consult a professional mechanic to determine the reason for the vehicle overheating.

The fan will not turn on

The most common sign of a faulty cooling fan relay is that the cooling fan does not turn on. The fan will not work if the electric motor fails or burns out, which is common. This is because the electric fan motor and fan blades work together to pull air through the radiator fans.

There is a loud whirring noise

When the radiator cooling fan motor fails, you may hear a loud clicking or whirring noise that changes as the engine is revved. The radiator cooling fan is sensitive and works in tandem with the blades; if one of them moves out of place, it may collide with other components, causing vibrations. When the fan clutch begins to fail, an embarrassing whirring noise will be heard.

Another sign of a failed or bad radiator fan is a blown radiator circuit fuse. The cooling fan circuit fuse will be blown if the electric motor surges or fails, protecting the remainder of the system from any electrical surge. The radiator fan will not turn on until the blown fuse is replaced.

An issue with the cooling system is indicated by the temperature warning light. If this message appears on your dashboard when you're driving or not, you must turn off the car and let it cool to avoid overheating. The temperature warning sign is most likely illuminated because your radiator fan is broken or inoperable.

How long do radiator fans last?

How much does it cost to get a radiator fan replaced?

The radiator coolant fan replacement is one of the more expensive car repairs (excluding the replacement of a seized car engine), costing between $128 and $162 in labor and around $465 in parts. As a result, replacing a radiator fan might cost anywhere from $592 to $627.

Many radiator coolant fans are designed to last a long time, possibly as long as the vehicle is still in use. However, if a fan fails (considering its vital role to cool your engine) you may be looking at more than just a broken fan – you may also be looking at a damaged engine. So be on the lookout for the symptoms and replace radiator fans as necessary.