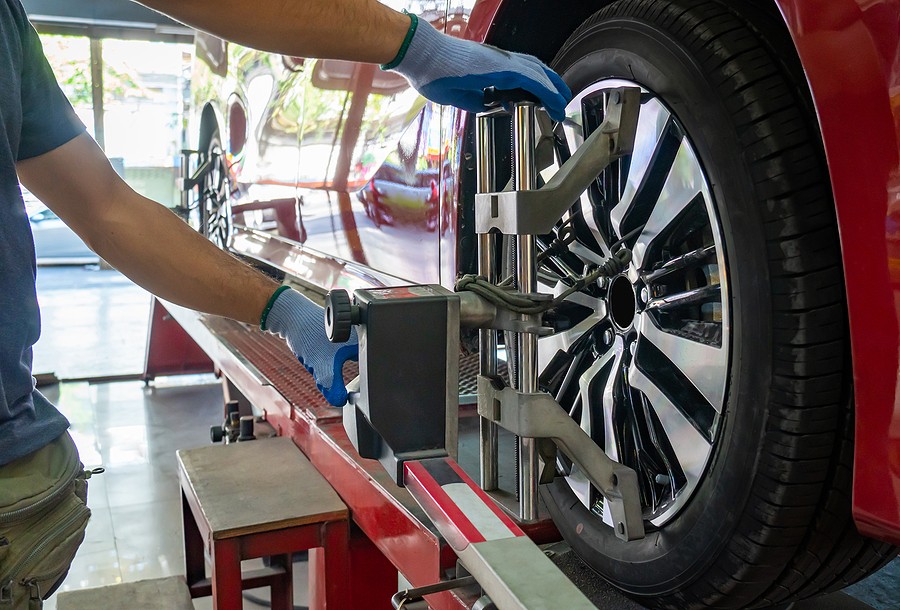 The word camber isn't one that comes up very often in casual conversation and not everyone knows what it refers to. When we're talking about your car, camber is the word we use to refer to the angle of the wheels. This relates to the vertical position of the wheel as it sits on the road.

If your car wheels have a negative camber it means the top of the front wheel is angled towards the centre of your vehicle's frame. A certain amount of negative or positive camber won't drastically affect your vehicle, but the window is small before it has a noticeable effect on how your vehicle handles. Some people actually want an excess of negative camber. You may have heard the term Demon Camber before, which relates to performance vehicles and street racers. If you've ever seen a souped-up car going down the road and the tires are bent in so far it looks like somebody dropped the vehicle from a height and almost popped the tires out, that's an example of what Demon Camber refers to. This is also sometimes called Hella Flush, which is obviously not a technical name, but some street slang for getting your tires in this position.

How Does Negative Camber Affect Handling?

When negative camber gets to a serious enough angle, such as in the case when somebody has Demon Camber, it actually looks like your suspension has completely given out on you. The reason that any driver might want this though is that it does have a noticeable impact on your car's handling abilities. In particular, negative camber will improve your grip when you're cornering. This is why it's used for performance vehicles and street racers so often. The effect of the camber on cornering is improved when you combine it with a short long-arm suspension. If you outfit in the proper way this can have a pretty remarkable effect on the handling of your vehicle.

There are some pros beyond the ability to corner when you have some excessive negative camber in your wheels.

Reduce Vibrations: If you have a perfect up-and-down alignment with your tires, what is known as neutral camber, then when you corner your wheels are going to lift in some patches off of the ground. That reduces a bit of the smoothness of your ride, you've likely noticed this to some small degree anytime you take a turn. A negative camber in your tires reduces this wheel vibration and makes the turning of your car a little smoother as a result.

Increased Speed Through Turns:  This isn't to say that having negative camber makes your car go faster, but it allows you to drive faster when you are doing things like turning corners. Again, this is why performance vehicles want to have negative camber. Even a negative camber of one degree or less will allow you to corner much more efficiently and, as a result, rely on your brakes less. You have more grip as you're going in and out of turns which means that you can handle a higher rate of speed as you go around corners or take curves in roads.

Prolonged Life: A very slight negative camber actually increases the lifespan of your tires because you're not putting all the pressure on the same spot on the tire, in particular when you're taking curves or turns of the road. This is typically less than 1 degree. Too much negative camber has the exact opposite effect.

There are also a few negatives to having an increased negative camber in your wheels as well.

Poor Acceleration:  While you can take corners with a greater speed thanks to a negative camber your straight-line acceleration is going to suffer as a result. The vehicle has to work a bit harder as you're trying to gain speed because of that angle on the tires. If your negative camber goes beyond 3 degrees, you will really notice this becoming a serious problem.

Poor Braking:  Just like the acceleration in a straight away, your braking in a straight line will also suffer because of that angle. It's essentially the reverse effect of why speeding up is so difficult, slowing down becomes difficult for the same reasons. If you don't have well-balanced tires the issue can become a serious problem.

Reduced Stability:  Every benefit you get from negative camber on curves in the road is lost on straight-aways. That means that even though you get a greater stability when you're going around corners and curves, you lose it on straight-aways. This is why it's really only recommended for performance vehicles that are actually turning on a circuit on a regular basis. For recreational driving, when you have to drive down straight roads on a regular basis, negative camber is actually going to give you less stability on the road and make it more difficult for you to drive.

This will be especially true in poor weather conditions such as wet or icy roads. Remember that most performance vehicles only race on dry tracks which is why they can handle the negative camber. For everyday driving, you run the risk of losing traction on wet or icy roads at a much higher degree than you would with neutral camber tires.

Wear and Tear: A very slight negative camber can increase the life of your tires however a greater degree of tilt can end up having the exact opposite effect. The trade-off for your increased traction is that the tires wear out much faster because the angle is creating more contact space on the road. Eventually you'll lose the grip that you gained from the angle and need to replace the tires more quickly than if you had no angle on them whatsoever. Some sources say that you are going to see a 20% reduction in performance as a result of having too much negative camber.

Broken Wheels:  Negative camber, especially on the rear wheels, puts a lot of stress on the tires and can cause them to break loose. The excessive angle that you get from something like Demon Camber makes this incredibly likely to happen.

Locked Steering: Most vehicles are designed to have wheels with neutral camber. The greater the angle of the negative camber the more likely part of the wheel is to actually rub against the inside of your vehicle's frame. If you take a sharp enough corner, the impact in your frame could cause your steering to lock up completely on you. This typically happens with a large degree of negative camber, but it can happen with as little as two degrees.

Locked Brakes: If the angle is bad enough with your negative camber, the brakes might lock up on you as well. If you are setting up a negative camber on purpose, then you'll need to adjust the set up until you're sure you're in a position with the brakes engaging properly. If the angle gets too severe, the brakes will not be able to perform their function and fail on you.

Is Positive or Negative Camber Better?

You may be surprised to learn that there is technically a benefit to either positive camber or negative camber in your vehicle. For the most part a positive camber is better for keeping the average vehicle steady and stable on the road. However, if you happen to have a high-performance vehicle that needs to take some corners at a high rate of speed a negative camber will actually be of better benefits to you.

For the average driver then if you had to choose between one or the other, a positive camber would serve you better. Unless you plan on doing any street racing, you probably want to avoid negative camber as much as you can unless you keep it very slight. All things being equal, neutral camber is what you want.

How to Fix Negative Camber

Assuming you didn't want the negative camber in the first place, then you're going to need to head to a mechanic to get it fixed. The potential cause for the negative camber obviously affects the fix that's going to be used to get your wheels back to a neutral angle again.

One of the best options is to head to a mechanic to get your alignment checked. This should properly reset the camber on all the wheels of your car. The suspension will be readjusted to factory settings and everything should be good at that point.

If there's still a problem with the camber, then you need a mechanic to look at the control arms and trailing arms of the suspension to see if there are any problems there. Sometimes bushings can get worn out or other things can come loose that can affect the camber of your tires.

What Does it Cost to Fix Negative Camber?

Often the best fix for an issue with negative camber is getting your wheel alignment done, as we said. The cost of getting your wheels aligned is not too steep, but it will cost you a few dollars. One thing you need to remember is that alignment usually is done in pairs. So, you can have your front wheels aligned, and your back wheels aligned. If you want all of them then you're actually getting the job done twice. The cost of a typical wheel alignment is usually between $50 and $100. Obviously that depends on where you go, and there are some shops that just do simple things like oil changes and alignments that may be cheaper than taking it to a mechanic. At the end of the day however, if you're going to get all four wheels aligned, you could be paying up to $200 to get it done.

It's worth noting that while you can do just the front wheels or just the rear wheels, it's probably in your best interest to get all four done at the same time.

Can I Do My Own Wheel Alignment?

When it comes to getting your tires aligned on your car, leave this job to professionals. You could do your own wheel alignment in the sense that there is technically no job on your car that you couldn't do if you tried hard enough, but it doesn't mean you should do it. This is definitely not the sort of job that your average home mechanic can get done because it requires a lot of specialized equipment.

There's not much sense trying this one on your own unless you are a pretty advanced level mechanic already in which case you don't need us to tell you just how difficult this job would be to get done at home.

A little bit of negative camber is not that bad for the average vehicle, if it's something you really want. You never really want to go much beyond 1°, however. Any more negative camber than that and you're going to be suffering some handling issues as well as a lot of excessive wear-and-tear that's going to see you replacing your tires  about as often as you change your oil. That is not something that you want to have to deal with. For that reason, if you like the look of it or the potential benefits you get for a performance vehicle, keep it on a performance vehicle only. Your average car on the road that you're using to drive to work or head to the store to pick up milk and bread does not need to have an excessive amount of negative camber by any means. You're only going to cost yourself more money and more hassle in the long run so there's not a lot of reason for it.