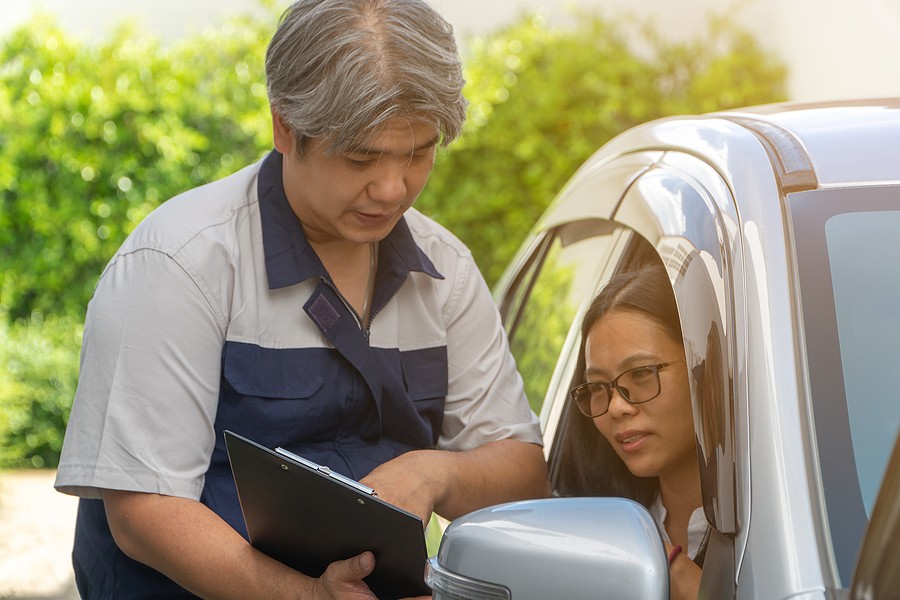 Wheel bearings in your car work with the tire and wheel in order to keep your ride smooth and even as you head down the road. They are essentially a set of steel balls set into a ring assembly that is referred to as a race. Like any ball bearings they are meant to ease movement in a smooth and even way. Without bearings, your wheels are unable to rotate, or at least not in the way that won't produce massive amounts of friction. Just about any vehicle that has wheels on it needs wheel bearings in order for those wheels to spin, from cars to airplanes to bicycles. Without wheel bearings you're going to suffer a lot of shaking and friction as you drive which in turn will cause wobbling in your wheels and worse.

You can find the wheel bearings in the hub of your wheel which is at the end of the axle. The hub is what the lugs bolt into that holds the wheel onto the car. One of the clear signs you'll get that you have a problem with your wheel bearings is the noise that they make when they start to go bad.

The sound a bad wheel bearing makes will only be audible when you're actually driving, which of course makes it difficult to diagnose sometimes. If you have the radio turned off and you're able to hear a grinding or grating noise coming from your tires that could definitely be a bad wheel bearing that you're listening to. That's not the only potential sound to be on the lookout for, however. Some have described the sound of a bad wheel bearing as a chirping sound that is repetitive. In some cases, it can produce a noise that's not unlike an outboard motor from a small motorboat. This will occur at speeds around 30 mph to 40 mph.

Check out this video here for an example of one of the ways the sound can manifest when you have bad wheel bearings. You can fast-forward to around the 2:30 mark to get a good idea of just what this problem sounds like in some vehicles. You can see, after listening to this, how if you're not familiar with the car you might even mistake it for normal engine sounds. It does sound like an engine, but a struggling one, which is weird. Fortunately, if you're driving your car that you've been used to for a while, you'll definitely notice an out of place sound like this happening.

Sometimes the noise can be hard to pick out over the sound of your engine however, and especially if it's not the loud chirping or grinding sound you may mistake it for normal engine noise. Just remember, if your car didn't normally sound like a small biplane flying by or an outboard motor on a motorboat that it's definitely a new problem and very likely is related to the wheel bearings. There are some other signs and symptoms you can be on the lookout for to let you know for sure that the issue you're experiencing is with the wheel bearings and not something else.

Signs and Symptoms of a Bad Wheel Bearing

Sometimes it's hard to diagnose the problem just on sound alone. So if you're experiencing any of these other problems along with that sound, you can make a safe assumption that it's the problem with your wheel bearing and, if nothing else, have a mechanic look there first to rule it out as a problem.

This is a problem you'll notice when you're driving, and the car seems to have a mind of its own. If you're driving down the road and the car starts to resist your hand on the wheel, or it starts to veer off unpredictably in one direction or another it could be a problem with your wheel bearings. There are other issues that can cause this related to your suspension, brakes and more but if you're experiencing it with that same noise then there's a more likely chance that it is a problem related to your wheel bearings.

If your wheel bearings have become bad enough you may notice some vibrations in your steering wheel while you're driving. It will be present at even low speeds but will likely get worse as you accelerate. This problem is often related to unbalanced tires and can even be related to transmission problems, but you shouldn't overlook bearings as a potential cause of the problem especially if you're experiencing some of these other symptoms.

You'll notice this problem as you're driving and the wheel in your hand doesn't seem to be very responsive. That means as you make those subtle changes down the road to keep yourself straight it feels like the car is maybe not doing what you ask it to do. When you make a slight correction, it doesn't feel like the car is responding and going the direction you're indicating it should go in. Problems with loose steering can arise from some other issues as well, but if we're looking at the problem as a whole if this is one of several symptoms then loose steering could be related to an issue with your bearings.

If the bearings have worn down badly in the hub then they are going to be loose in the wheel assembly which in turn makes your steering wheel not as tightly in control of the system when you do make those subtle corrections and turns.

What Are the Different Noises a Wheel Bearing Can Make?

As we said earlier, you may experience several sounds when a wheel bearing goes bad. That may not be the most helpful thing in the world to try and diagnose the problem if there are a few that you need to figure out. The video we linked includes one example, but there are others that you may want to keep an ear open for.

Humming:  This is the hardest sound to pinpoint when it's being caused by your wheel bearings. Many different parts of your vehicle will hum when it's in motion, so you'll need to pay careful attention if you're hearing something like this. One thing you could do is have somebody else in the car to help you figure out where the hum is coming from.  Even if you do narrow it down to the wheels, the CV joint, the tires, and other parts can also have issues that will create a hum.

Chirping:  We mentioned this one earlier, but the chirping sound is usually cyclical and repetitive, and it can be high-pitched. We call it a chirping sound because it does in some ways sound a bit like a bird. It will usually be very fast-paced and is distinguished from most other sounds your car makes.

Growling:  This is the closest to the sound that you were here in the video that we linked above. A growling, grinding, grating noise that does sound mechanical but is not usual to the way your vehicle runs.

Squealing:  This is very much a sound caused by intense stress and friction and we usually associate the sound of squealing with things like a bad serpentine belt or an issue with brakes. However, if there's a sustained squealing noise while you're driving, the wheel bearings could be the source of the problem.

Howling: This one is unusual and could potentially have a few causes as well. If you notice a howling sound that happens as you accelerate it could just be worn out gears. But when your bearings are severely worn down, they can create a howling noise because they're not supporting the gears correctly. If the howling noise occurs just when you’re decelerating it may be loose pinion bearing preload.

How Long Do Wheel Bearings Last?

There's no hard-and-fast rule for how long wheel bearings are going to last in your vehicle. Fortunately, they are meant to last a long time regardless and replacing them is by no means part of regularly scheduled maintenance like changing your oil filter or inspecting the fuel filter for instance. Good quality wheel bearings should last you for up to 150,000 miles worth of driving, which could essentially be the life of your vehicle. Like we said though, there's no guarantees and the way you drive your vehicle will have a great impact on how long they will last. The harder you are on your car, the more wear they are going to endure, and the more likely they are to wear down sooner rather than later.

Likewise, if you drive in extreme weather conditions on a regular basis, especially if you go from very cold winters to very hot summers the bearings are going to wear down much sooner. It's not inconceivable that they would only last half as long bearings in more favorable weather conditions might last.

How Much Does It Cost to Fix a Bad Wheel Bearing?

Any repair job in your car is going to depend on a number of factors including the make, model, and year of your vehicle as well as where you take it to get it fixed. As you no doubt know, a Honda Civic it's probably going to cost less to repair than a Porsche 911. So, keep that in mind when figuring out how estimates or averages work for repair costs.

Can I Replace My Own Wheel Bearings?

You can replace your own wheel bearings if you want to save some money. You can check out a video like this one that will actually guide you through the process of how to change your wheel bearings fairly simply on your own. This isn't the easiest repair job in the world, but if you have moderate to intermediate skill at doing some home repairs on your car you may be able to handle this task. You can see on AutoZone that the cost of parts is going to be somewhere between $50 and $200 if you are interested in taking this task on by yourself.

Is it Safe to Drive with a Bad Wheel Bearing?

In the simplest terms it is not safe for you to be driving with bad wheel bearings. If you're noticing the symptoms that you have bad wheel bearings then sure, you may be driving at the time it happens but at any moment the wheel could grind to a stop or even come right off of your car. That can lead into a serious accident and damage especially if it happens at a high rate of speed.

As well, as your bearings begin to fail, they're going to put an excess amount of stress on things like your CV joints and the hub. This in turn could transfer to the transmission causing damage there. A small problem can quickly escalate to a big problem if you ignore it for too long.

The wheel bearings in your car are something that most drivers will never think of because they are a hidden away part that we don't see. In fact, the average driver probably isn't even aware they exist. The fact that they do such an important job means you do need to be aware of them and especially be aware of the signs that they're going bad. If you're experiencing any of these symptoms, you're going to want to take your vehicle to a mechanic or get the job done yourself before this small but inconvenient problem spirals into a catastrophic one.