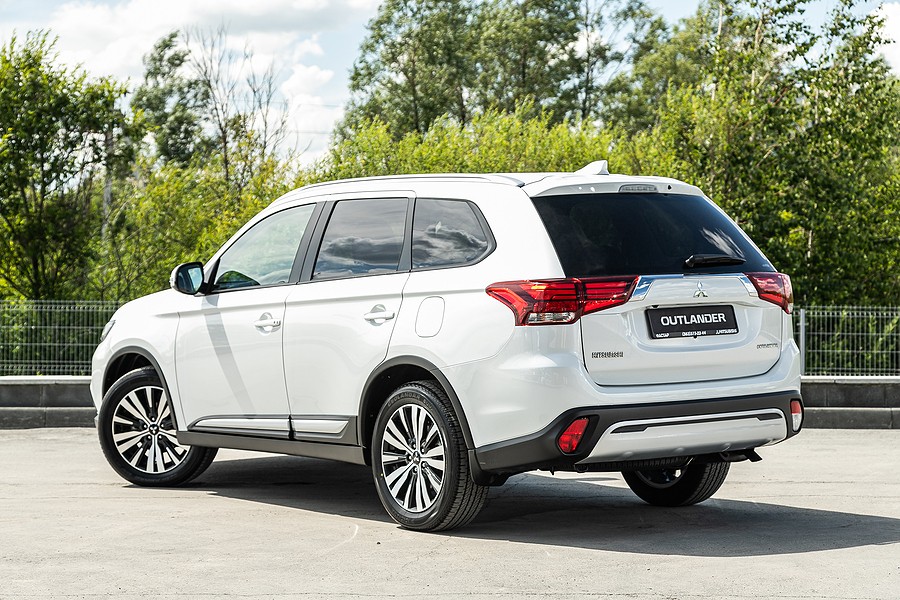 The Mitsubishi Outlander is a crossover SUV manufactured and produced by Mitsubishi Motors, a Japanese automaker that was the sixth largest Japanese automaker back in 2011. Originally called the Aitrek when it was first produced in 2001, it changed its name to evoke a feeling of adventure and appeal to outdoorsmen.

A change during the third generation line up, the company created a plug-in hybrid model in 2013 called Outlander PHEV. A plug in hybrid is an electric vehicle that can be recharged by plugging it into an external source of power. As of 2019, Europe is the leading market of the hybrid cars, with the Outlander hybrid being listed as Europe’s best selling plug-in hybrid vehicle. Despite this success, there are still some Mitsubishi Outlander problems.

The top three Mitsubishi Outlander problems can show you exactly what to look out for in your new Outlander. The third worst problem was the paint chipping and scratching easily in the 2016 Outlander and occurring early on at around 10,000 miles. The second most prevalent problem was the paint chipping in the 2015 Outlander, occurring at just below 11,000 miles. Lastly, the worst problem in the Outlander was the premature break wear in the 2018 model, costing around $600 and happening at around 23,000 miles on average.

Although the 2014 Outlander has the highest number of complaints, the 2018 has been widely regarded as the worst model year due to the higher prevalence of issues, the severity of the problems, and the onset of the issues. The most common problem in all model years of the Outlander is the paint chipping in the 2015 Mitsubishi Outlander problems.

The first year of the Mitsubishi Outlander problems were very minor, with the inception year of this model having decent reviews across the board. The only real complaint for the 2003 Outlander focused on the AC and heater issues, with the NHTSA also issuing 28 complaints about suspension and 20 complaints about the lights.

The top complaint from users focuses on the water leaking from the AC, with the average mileage of occurrence happening at nearly 500,000 miles, which is late in the lifespan of most cars.

This year had a few more complaints, with the main concerns focusing on the engine, lights, and the suspension. The engine problem dealt with the car starting, the engine cooling mechanism, and the vehicle speed control. The vehicle not starting occurs at around 40,000 miles and has users stating that the engine wasn’t responding to the key in the ignition.

The same issues continued with the 2005 Outlander, with the top user categories of concern focusing on the engine and the suspension, while the NHTSA lodged very few complaints for this model year, showing some of the safety issues improved since the first two years of production. The user engine issues center around the engine cradle rusting and the engine warning light staying on during use.

The next year of the Mitsubishi Outlander Has different issues than the previous years, with the top concern being the electrical system and the lights. The electrical issues focus on the car not being able to properly accelerate on time over 40 miles per hour, with the typical repair cost coming in at around $1,300 and occurring at 67,000 miles, with the most common solution being to replace the throttle sensor.

There were more problems this year than the previous generations of the Mitsubishi Outlander, with the main concerns focusing on the wheels and hubs, the suspension, the exterior accessories, and the lights. The NHTSA also lodged nearly 50 complaints for the suspension. Regarding the wheels and hubs, the top concern from owners focused on the broken valve stems on the tire pressure sensors, with the typical repair cost coming in at just below $200 and occurring at 95,000 miles, with the most common solution to replace the tire sensors.

For the exterior concerns in the 2007 Mitsubishi Outlander problems, the main concern is the wipers do not work properly to provide enough visibility to the driver. This issue generally happens at around 91,000 miles, with owners stating that the wipers stop when the washers are activated to clean the windshield.

Despite the numerous problems in the previous model year in 2007, the 2008 Outlander had fewer problems that were major issues that needed to be immediately addressed. The top concerns focused on the AC and heater, interior accessories, and the electrical system. The top concerns in the AC system focus on the AC noise, with the typical repair cost coming in at around $500 to replace the AC pump at an average mileage of around 75,000 miles.

The electrical problems focus on the computer failure in the Outlander, with the most common solution being to replace the computer at around 20,000 miles to fix the Mitsubishi Outlander problems. Lastly, the interior accessories gave concern about the radio amp blowing during use, with the typical repair cost coming out to $700 to replace the AMP at an average mileage of 83,000 miles.

This model year was similar to the previous in terms of problems and the severity of the issues. The main concerns focused on the engine for the NHTSA and users, with the second highest category of complaints being the wheels and the hubs. The engine concerns focus on the engine warning light constantly being on, the oil drain plug thread missing and the unintended acceleration while driving. To fix the engine warning light constantly being on, the most common solution is to replace the faulty sensor at around 4,000 miles.

Regarding the wheels and the hubs, the main issue is the tire pressure valve malfunction, with the typical repair cost coming to $220 to replace the valve at around 35,000 miles, with users stating that the tire pressure sensor valve stem rots due to the aluminum construction.

The following year of the Mitsubishi Outlander had fewer issues than the previous models but had a high number of NHTSA complaints regarding the engine. The NHTSA cited numerous issues for the engine, the engine cooling, and the vehicle speed control. Owners of the Outlander stated that the engine stalls during use, the car dies while driving, and the car will cut off after erratic idling while standing still.

These two model years had very few complaints, with the main issues being very minor and focusing on the engine and the transmission. The engine complaint dealt with the engine knocking, which occurs at around 2,500 miles, which can be quite early for most car models.

This year of the Outlander had the highest number of Mitsubishi Outlander problems and complaints throughout all the generations. The top category of concern was the interior accessories, followed by the wheels and hubs, the body and paint, and the AC and heater. The NHTSA also lodged a high number of complaints regarding the seatbelts and airbags.

The main issues with the interior accessories focus on the speedometer inaccuracy, the driver's seat moving while operating, the Bluetooth feature not working, and the entertainment system lacking some compatibility. The inaccurate speedometer generally occurs at around 4,500 miles, with owners stating that the difference between the odometer and the real speed is around 7-10 km.

The NHTSA safety issues focus on the airbags and the seat belts, with owners stating that the airbag service required light stays on during use, the airbags didn't deploy in the event of a crash, and the alternator continues to run even when the car is off, which can drain your battery very quickly.

After the model year with the highest complaints, the Mitsubishi Outlander still had numerous issues regarding the body and paint, AC and heater, and the interior accessories. The top complaint about the body and paint system is that the paint continuously chips, with the most common solution being to repair and replace the paint at around 11,000 miles.

The AC and heater concerns focus on the faulty AC compressor and a bad AC condenser, with the most common solution being to replace the compressor at around 30,000 miles, which can be quite expensive.

After the Mitsubishi Outlander problems in 2015, the issues in 2016 mainly focus on the body and paint for users, while the NHTSA lodged complaints for the drivetrain and the engine system. The body and paint concern is remotely the same form the past years, with the issue being the paint chips and scratches very easily, occurring very early on at around 10,000 miles.

The drivetrain concerns from users and the NHTSA focus on the excessive noise while driving in the powertrain. Owners of the Outlander have stated that the car suddenly downshifts unintentionally during use, the car is unable to return back to normal gears for high speeds, and the car is very jumpy and jerky while accelerating or shifting.

The NHTSA engine concerns deal with the vibration occurring after a software update, the engine mechanism, and the vehicle speed control. Owners have stated that a fire can start in the engine of the car, the vehicle loses acceleration at times and will not be able to go any faster, and the car jerks while accelerating from slow speeds.

One of the last years that had substantial issues was the Mitsubishi Outlander in 2017 – just check out the most common Mitsubishi Outlander problems. This model year had the highest number of concerns regarding the interior accessories, with users stating that the Android Auto Interface had issues, the Bluetooth did not work, the dashboard vibrated while driving, the driver assistance camera stopped working, the park assist system made noises during use, and the seat moves while driving.

The last year that had any problems of real concern for this type of car was the 2018 model, showing the prevalence of Mitsubishi Outlander problems throughout the various model years. The top concerns focused on the electrical system and the brakes. The electrical issues dealt with the car not being able to turn over or provide any power, with the problem occurring very early on at around 12,000 miles.