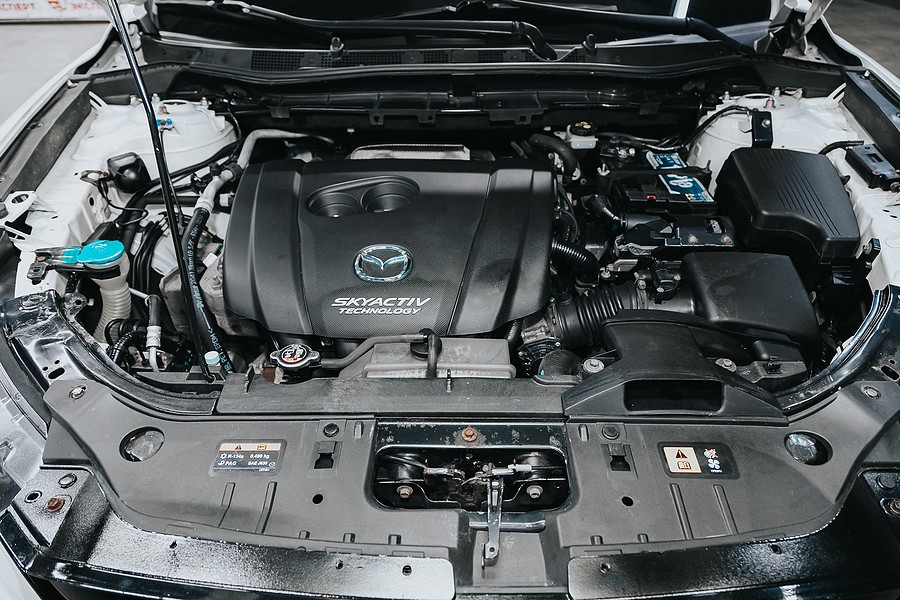 When looking at fixing your Mazda, you can expect the overall engine rebuild cost to be between $2,500 and $4,000 on average. However, the total Mazda engine repair cost depends on what kind of Mazda model you own, the prevalent issues according to each model year, and the other damage that has been caused due to an engine malfunction.

There are various engines that can be used in Mazda models depending on the kind of performance needed. Mazda makes both piston and rotary engines, with the former being those with pistons that convert pressure into a rotation, while the rotary engines use a rotary design.

The second engine type was the inline-4, beginning with a small 358 cubic-inch engine and later developing into a twin turbo diesel, 2.2-liter engine. The engine type evolved from the first model in 1961, to the latest model now in 2012 known as the SkyActiv-D.

Another kind of engine popular among Mazda cars is the V6 engine, beginning in 1995 and now using the Ford Duratec V6 design in their latest models.

The final kind of engine that Mazda uses in their vehicles is the rotary engine, also known as the Wankel engine. This type of mechanism is poised for sports car usage, with this kind of engine outputting high performance values and horsepower. The latest kind of engine is the Renesis, a 1.3-liter engine produced from 2004-2013. Mazda is currently working on the Mazda Skyactiv-R, a Wankel engine that will be produced in the 2022 model year cars.

Regarding every single Mazda problem in each category across the board, there are certain models and problems that stick out as the most severe and most concerning for car owners. The more you deep dive into the specific manufacturers and models the more likely you are to find troubling issues that can educate you as a car buyer.

First, the Mazda3 frequently makes loud rattling noises while driving. This rattling noise is typically due to a loose rear brake light mourning, causing a safety issue while braking or driving in congested traffic. To fix this issue in the Mazda3, you will have to pay for the mounting to be replaced, increasing the total mazda engine repair cost.

Second, the Mazda2 pressure fuel pipe might come in contact with other internal parts, causing friction and overheating. Although this sounds v3ry serious for all Mazda cars, this problem only affects certain Mazda2 models that were built during the 2018 model year.

Thirdly, another server problem that is commonly-occurring in Mazda models is a malfunctioning diesel particulate filter in the Mazda6 variant. With numerous issues that arise in the Mazda 6 and the Mazda6 Tourer, we cannot recommend either one of these vehicles for safe driving.

These cars are especially susceptible to electrical concerns regarding the tire monitoring system and the sensors installed in the tires to monitor tire pressure. If these sensors wear out, you may need to replace these electrical comonnetsn and check for any damage caused by rust or debris.

Lastly, another problem in Mazda vehicles are blocked drains and water build-up in the Mazda MX-5. owners of this car frequently experience a damp smell in their vehicle, causing water damage and an unpleasant ride for the driver and the passenger.

Regarding the Mazda2 and the overall Mazda engine repair cost, there are numerous factors that can affect how much you will pay. Unfortunately, in 2017, this car model was given a score of just 22 by the Reliability Index calculator, a poor score that shows a lack of confidence in this vehicle by both users and manufacturers.

Reliability Index accounts for the cost of repairs, the amount of time the vehicle is in use before the problem occurs, and the number of issues in this vehicle compared to other similar cars on the market. A few years later, in 2020, the Mazda2 increased to the second-most reliable car in the entire Mazda range.

However, despite this jump in reliability scores, the Mazda still frequently undergoes axle and suspension issues by 32% of wonders, along with engine concerns that can lead to a Mazda high engine repair cost.

The Mazda3 has its fair share of problems, sme minor and some severe. One of the most prevalent issues was the interior mirror potentially detaching from the mirror housing. The most susceptible cars to this issue are the ones produced between December of 2018 and March of 2019.

In addition, another common issue are inoperable windscreen wipers. The cars affected by this problem were produced between July 2015 and July 2017, with the wipers limiting your visibility while driving on the road.

The final problem is engine failure. Engine protection software malfunctions on certain Mazda3 models that were produced between April of 2015 and November 2017. This malfunction causes the engine to over-rev, producing excess friction, overheating, and internal damage to other engine parts. The internal damage leads to a much higher Mazda engine repair cost.

Addressing the next model, the Mazda CX5, this specific car produced from Mazda has had numerous issues with the diesel version of this car. Nearly 10% of owners complained that they found faults with their engine, especially concerning the Engine Monitoring Unit.

In addition, car owners also stated that they had issues with the non-electrical parts within the engine, causing them to bring their car to a garage or a mechanic for an estimate of the Mazda engine repair cost.

Overall, the Mazda CX9 is a very popular car among car owners and potential car buyers today. However, mechanical failures, electrical short circuiting, and other internal concerns have accused this model to not be the most reliable car you can purchase when shopping for a new vehicle.

Since the first model of the Mazda CX9 was manufactured in 2009, the most common issues that you could experience in this vehicle includes braking system safety concerns, engine failures, and coolant system issues.

In total, the Mazda CX9 from 2012 received the highest number of overall complaints in all car categories, while the 2008 is often rated as the worst model year due to the severity of the issues. The later cars, like the 2017 Mazda CX9, received fewer issues and have increased in reliability since the earlier models.

Finally, the Mazda6 experienced some issues regarding the engine and the reliability. Over 33% of Mazda6 owners complained about the engine performance and reliability, with over ⅓ having to bring their vehicle in to get an estimate on the Mazda engine repair cost. There were various problem areas in the Mazda 6, including the electrical and braking system.

However, the most common concern that is the most expensive is definitely the engine. An engine failure problem was not very common, but when it did happen, it caused a lot of damage to the rest of the car and the overall Mazda engine repair cost.

Regarding the engine, Car Complaints stated that numerous Mazda6 owners claimed the car suddenly died while driving without any warning signs. This issue was especially common in the 2004 Mazda6, with the incident occurring at under 100,000 miles.

The 2004 Mazda6 owners who experienced this premature engine failure chose to look into the Mazda engine repair cost and lean towards engine replacement. On average, owners paid around $3,800 to fix the broken engine, not including other parts that got damaged in the process.

In 2019, Mazda recalled over 35,000 of their units due to fear about the engine performance, driver safety, and premature engine failure. The Japanese automaker was concerned that the engine could suffer from a build-up of carbon deposits within the internal components, leading to debris, contaminants, and blocked passages.

If the engine components are blocked and oil cannot flow through the tubes, it can lead to overheating and excessive friction. The car models that are most likely to have this issue are the Mazda3, Mazda6, and Mazda CX-5 moles.

The 2019 recall applied to over 35,000 units built between the 2012 and 2018 model years. If your car was affected by this recall and this engine problem, you would have noticed a reduction in engine power, subpar engine performance, multiple dashboard warning lights, an increase in stopping distance, black smoke coming from the exhaust, and the engine stalling during use.

If your engine had any of the above symptoms, chances are there is a much higher Mazda engine repair cost associated with the negative signs.

The average Mazda engine repair cost depends on which model year you are looking to buy. There are vast differences between the options, like the Mazda CX5, Mazda2, Mazda3, and the Mazda CX9.