White Smoke From Your Engine: What You Need to Know 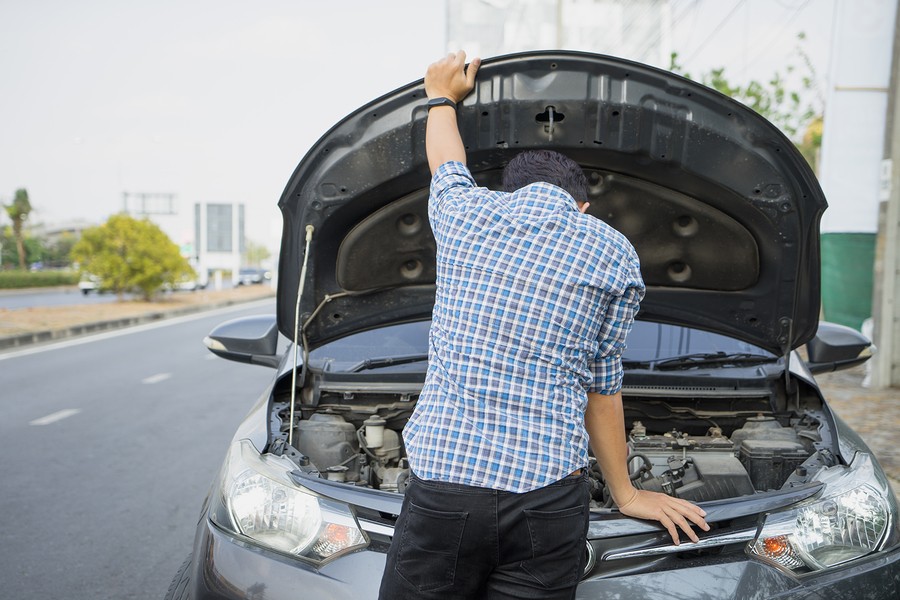 When you’re driving down the road with your family in tow, the last thing you want to see is some white smoke from your engine or blowing out the exhaust pipe. Smoke is never a good sign and you don’t need to know a lot about cars to know that something bad is happening when that white smoke starts puffing out. The question you’ll be wondering next is what’s happening and what you can do about it. We’ll explain exactly what’s causing that white smoke from your engine and how you can deal with it.

What Is the White Smoke From Your Engine?

Under normal circumstances, a combustion engine should produce water vapor and carbon dioxide as exhaust. The catalytic converter inside your exhaust is there to filter out most of the toxic by-product that causes pollution and leave your exhaust relatively clean. When you’re driving in traffic, this is why a car that seems to be “burning” a weird kind of fuel is noticeable. Most cars don’t belch noticeable smoke, only a small bit of exhaust. So, when your car is producing a distinct and thick cloud of white smoke, something has gone wrong.

When you see white smoke, you may have some kind of contamination in your combustion reaction. You’re supposed to be burning fuel and air to power your vehicle, but sometimes other things can leak into the combustion chamber. For instance, if you notice smoke with a tinge of blue to it, you likely have an oil leak and the burning oil is producing blue smoke. Black smoke is fairly common as well and can have several causes from too much fuel being burned because of a faulty mass airflow sensor to clogged air filters. White smoke, however, has different causes.

Why Is White Smoke Coming From My Engine?

Knowing that coolant is leaking into your fuel supply is helpful in diagnosing the cause of the smoke coming from your exhaust but that doesn’t explain how it got there in the first place. There are a few reasons to account for how coolant found its way into your engine.

What Will it Cost to Fix the White Smoke Problem?

As we’ve seen, there are a lot of potential reasons for your car to be producing white smoke in the first place and that means here are just as many potential repair bills to go along with it. Let’s take a look at some of what we’ve covered, and those associated costs.

As you can see, there’s a really dramatic range of costs and causes for a white smoke problem with your car. It’s precisely because there are so many causes and symptoms that we can’t narrow down a cost for you much more precisely than we have, unfortunately. But this also means that when you see white smoke coming from your exhaust you need to get it attended to as soon as possible because the issue could be very serious.

Can I Drive With White Smoke From My Engine?

Generally speaking, your car will probably still function when you see white smoke coming from the exhaust, but it is a good warning sign that you need to act quickly. This is even more clear when the smoke is not just being released from your exhaust but from under the hood itself. While a minor coolant or oil leak could be a relatively simple repair, this can be the first indication of one of the much bigger problems we mentioned.

A blown head gasket left untreated can lead to a catastrophic engine failure if it’s not addressed before it’s too late. Anything from a snapped crankshaft to a complete engine repair or replacement may be necessary.

The long and short of it is that when you see white smoke and it’s not just normal exhaust vapor, you need to get your vehicle checked as soon as you can. The repair bill may be steep but not getting it repaired could lead to even more serious damage and repair costs as well as a dangerous situation that ranges from your engine dying to overheating and even catching fire if there is a coolant or oil leak. That can be a serious danger to you and other drivers on the road. You need to take the presence of white smoke seriously.

Is it Worth Fixing The White Smoke From Your Engine?

Any problem is definitely worth fixing if your car is still in relatively good condition and it’s still something you want to put effort into repairing. If you have a much older vehicle that has other problems, and the cause of your smoke is more serious like a blown head gasket, then this might be something worth thinking about to weigh the pros and the cons. An older vehicle billowing white smoke likely has other problems you need to be aware of as well. Depending on the overall value of the vehicle, a repair bill of $2,500 or more might be counterproductive for you.

The best thing you can do is check out the value of your car based on its make, model, and year to see what it’s actually worth right now. You can look up your car’s value on a trusted site like Kelley Blue Book and that will help you determine whether investing a serious amount of money in repairs is even worth it.

If the issue is too serious, you may want to consider just selling your car as it for the parts or, if it’s gone too far gone, even as a junker. It really does depend on the situation and your own personal needs, as well as your attachment to your vehicle.

PrevPreviousThe Cost Of Brake Calipers
Next2013 Ford Focus Recalls – What Are They And Why Are They Dangerous?Next