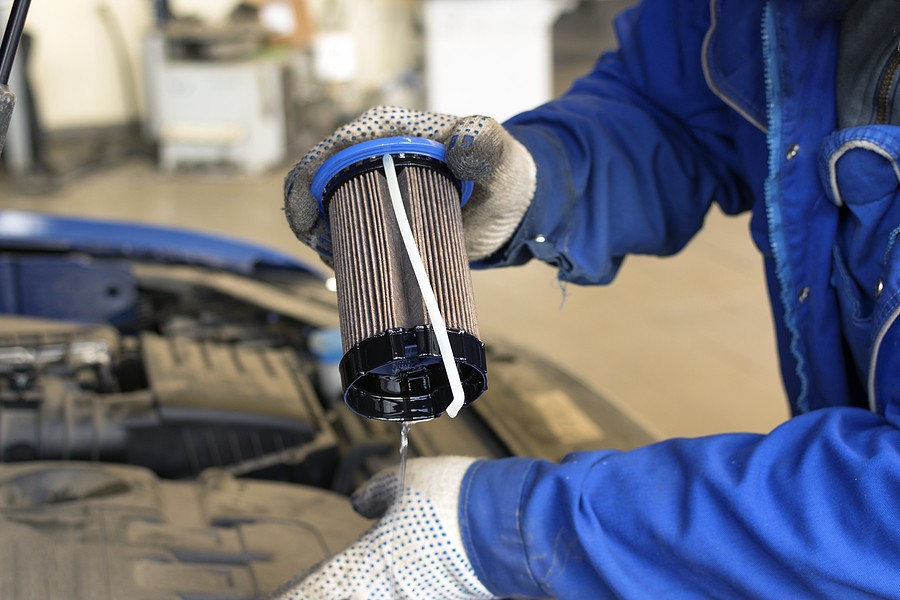 In order to keep your car running as smoothly as possible nearly every liquid that you put in it has a filter that it has to run through to keep dirt and debris from contaminating the system. Your oil filter is something that needs to be changed frequently and most people are aware of it, but your fuel lines also have a filter in them.

Proper maintenance of your car's fuel lines, including replacing the fuel filter, will ensure that your engine has fewer problems in the long run, your car burns fuel more cleanly and efficiently, and you pay less money for repairs over the life of your vehicle. It's a good idea to know where your fuel filter is, how often you need to change it, and even how to change it yourself to save yourself some money from going to the mechanic to get them to do it for you. With that in mind, let's just dive right in to how to change your fuel filter and how you even know you need to change it in the first place.

Can I Change My Fuel Filter Myself?

Changing your own fuel filter is not that difficult a task and will definitely save you a bit of cash. One thing to keep in mind is that when we talk about changing your fuel filter, we are assuming that you have a typical gasoline powered engine. If you are driving a diesel engine, then the process is actually quite a bit different. It's a little more complicated to change a diesel fuel filter and also a little more dangerous.

Assuming that you do have a typical gasoline powered engine, the first thing you want to do before getting in there to replace a dirty fuel filter is to relieve pressure in your fuel system itself. Your fuel lines are under pressure which is necessary to spray the fuel into the combustion chamber of your vehicle in the correct amount at the right time. Relieving that pressure is an important safety concern before attempting this kind of a job.

Step 1: Relieving the pressure in your fuel line involves running a vehicle without the fuel pump for a short period of time. To do that you need to remove the fuse for the fuel pump. You'll need to check in your owner's manual to find out where this fuse is located as you may have more than one fuse box in your vehicle. If all else fails, you can Google the make and model of your car.  You should be able to remove the fuse with a pair of needle-nose pliers and that will disable the fuel pump.

Step 2: You’ll still have some leftover pressure and fuel in the lines so you're going to need to start your vehicle, keep it in park and let it run for a moment.  Your car should only be able to run for a brief amount of time like this, and it may just sputter right away and then die on you. That's the reaction you're looking for as it expends the remainder of the fuel in the lines relieving the pressure.

Step 3: If your vehicle continues to run, there's no need to worry. Just let it go for a minute or two before turning it off. The engine doesn't have to die completely for the pressure to be relieved, so it's no cause for alarm if this happens. In fact, it may be better to keep the engine running without it dying simply because getting it started again later it's going to be more difficult if it sputters and dies on you.

Step 4:  With the engine off you can replace the fuel pump fuse which you won't need until later. Now you can set about removing your old fuel filter.

Step 5: Pop the hood of your car and disconnect your battery. Take the cable from the negative terminal to ensure that the car can't be accidentally started in any way and you're not going to be getting any kind of a shock. Just tuck the terminal to one side so you can reattach it later.

Step 6:  You should refer to your owner's manual to figure out exactly where your fuel filter is located because there are a couple of common locations for them to be found. Typically, you'll find it along the fuel line under your vehicle however in some cars they are in the engine bay itself. It's also possible that it may be in a third location, which is why you really need to look up your particular make and model before you go any further just to save yourself some time hunting the filter down.

Step 7: You need to get your car up on jack stands if the fuel filter is located underneath your car on the fuel line. Once you find the fuel filter you are going to need some kind of container underneath it to catch run off.  A bowl or a bucket of some kind will do, just make sure it's actually able to hold gasoline. Some cheaper plastics will actually melt when they come in contact with gasoline and you don't want that.

Step 8:  The fuel filter is going to be held in place by a couple of clips. They should be on either side of the fuel filter which is a cylinder shape. You can use a flat head screwdriver to pull the clips out but be careful. It's very common for these clips to break as they're being removed. If that happens, don't worry, just make sure that when you buy your new fuel filter you get some replacement clips along with it just in case.

Step 9: You can now remove the fuel line from your fuel filter. You'll have to slide the line away from the filter and pop it off on both ends. Hold the fuel lines carefully and direct them towards the container you have to collect the extra fuel. It's a good idea to wear goggles when you do this just in case any gasoline splashes towards your face.

Step 10:  With the fuel lines removed you can pull the fuel filter from the bracket that holds it in place now. It probably needs to slide out towards one end or the other but not both because of the shape. Just move it in whichever direction it seems to move in.

Step 11:  With the old filter removed you are ready to install the new filter. Take a look to make sure that your replacement filter looks exactly like your old filter. If it's the wrong shape or size, then you have the wrong part and it's not going to work. Slide your new filter back in the bracket the same way you removed the old one. This should be an easy fit. If it's not, then again you may have the wrong size filter.

Step 12:  You can now reconnect the fuel lines to the front and the back of your fuel filter. Once they are attached, use the clips to secure them in place again. You just replaced your fuel filter and are ready to start your vehicle again.

Step 13:  You can now reattach the battery and attempt to start up your car once again. If it sputtered to a stop earlier after you had relieved the pressure, it may take a moment to build up the pressure again to get it going.

How Do I Know if I Need to Change my Fuel Filter?

Your fuel filter helps clean out debris and build up in your fuel lines so that you can burn the cleanest gasoline possible to run your engine. It wouldn't be doing this job if it didn't get dirty, so it's a good thing when it ends up getting clogged with debris because that means it's done its job properly.

There are a few signs to let you know that your fuel filter has become too clogged to do its job properly anymore and you're going to need to get it changed. If you start experiencing any of these, you may want to take a look at the filter and swap in a new one. Generally speaking, a fuel filter is going to last you about 2 to 5 years or 30,000 miles to 50,000 miles although they can last longer on some models.

When you hit the gas if your vehicle is really slow to get going it's very likely you have a problem with your fuel filter preventing the fuel from flowing the way it's supposed to.

If you're having consistent problems starting your car then the fuel filter may be too clogged to allow the proper flow of gasoline any longer. If it's partially clogged then you're going to have issues getting started but if it becomes too bad then you won't be able to get your engine started at all because there's simply not enough fuel making its way into the engine.

You may have issues with your vehicle not running properly thanks to the fuel filter being clogged. If it starts okay but tends to shut down anytime you stop, that could definitely be an issue with your filter as well.

You'll notice this at low speeds when you're driving. If the car sputters, then this is also probably the issue with your fuel filter being clogged. It's not so bad that it shuts your engine down at this point, but it's a definite sign that you should have it looked at before the situation gets any worse.

Because you can't get the precise fuel to air ratio injected into the engine at the right time when your fuel filter is clogged, you may end up having an issue with engine misfires. This will also affect your fuel efficiency which will see you heading to the gas pumps more often than normal even though you're not getting any kind of improved mileage or performance by any means.

What Does a Fuel Filter Cost?

If you were to take your car to a mechanic to get your fuel filter replaced, you would likely end up paying somewhere between $100 and $150 for parts and labor to get the job done. However, if you follow our directions and you swap it out for yourself, you're definitely going to save some labour costs on this job.

You can head to AutoZone and check out the cost of getting new filters. While some of the more expensive ones can cost upwards of $50, the cheapest ones are actually under $5. Obviously, you need to make sure you have the exact right filter but doing this job yourself could definitely save you quite a bit of money.

Although it can be frustrating to realize that your fuel filter has run its course and needs to be replaced, you need to keep in mind that this part exists solely to get dirty and be replaced. If it wasn't doing that, then it wouldn't be doing its job and you would have much bigger problems throughout your car because of debris and contaminants in your gasoline making it all the way to your engine.

If you are new to DIY car repairs changing your fuel filter is one of the easier jobs that you can handle on your own. It's certainly not as simple as just changing a tire or even the oil filter, but it's not nearly as complicated as trying to do something like changing a timing belt either. It's a good place to get started if you want to take more control over how your vehicle works and how you get repairs done while saving yourself a good deal of money at the same time.

Just remember to be safe anytime you're working with your fuel line, do your best to avoid getting any gasoline on yourself or spilled on the driveway and make sure you dispose of any old fuel carefully to avoid injury or accidents.