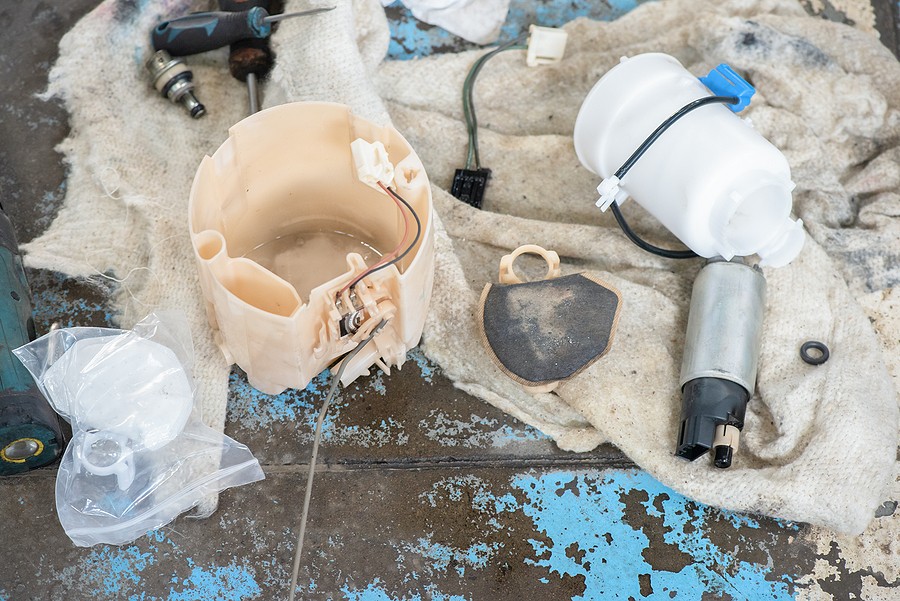 Every vehicle fluid must go through filtering before reaching the final destination to ensure the best vehicle performance. Filters are used in multiple vehicle systems, including the braking, the transmission, the oil, and the fuel.

Fuel filters ensure that the fuel gets purified before getting to the engine or combustion system. These filters prevent larger particles from making their way to the engine cylinders to allow for appropriate fuel explosion resulting in the best engine power.

As your vehicle ages, many components might need to be replaced to maintain the best vehicle function, including your vehicle’s fuel filter. The fuel filter gets clogged as the build-up of the large particles, requiring immediate replacement.

Why does your car need a fuel filter?

Fuel filters prevent larger particles from getting into the combustion system. Larger particles can come from the dirty fuel itself, or as the fuel tank wears out.

It is not good to have large particles get into the engine’s cylinder. This is because the engine requires a specific fuel-to-air ratio for the best combustion and fuel explosion. Getting large particles in the combustion system affects the fuel-air-ratio and, therefore, the generated power by the engine.

Issues with fuel filter can also affect the function of the fuel pump. This is because the fuel pump is responsible for pushing the required amount of fuel through the filter then to the combustion system.

Depending on the car’s make, model, and year, the fuel filter must be replaced due to partial or complete clogging. The vehicle’s owner’s manual is the best place to start with for accurate information about fuel filter replacement frequency.

Unsurprisingly, electric cars do not have fuel filters as they do not require fuel or engine combustion to provide the needed power by the vehicle to move.

Like many other vehicle components, the fuel filter would tell you when you need to be replaced before it fails. In this section, we will cover the most reported bad fuel filter symptoms.

A bad fuel filter can affect the vehicle’s overall power. Power fluctuation can happen due to a bad filter, especially when the vehicle is under stress.

Have you noticed that your vehicle lost power suddenly as you drive uphill? While losing power could be due to many factors, a bad fuel filter might be the culprit.

When you are driving uphill, the vehicle’s engine tries to resist gravity and to do so, and it will need more power. To generate more power, the engine will force the pump to send more fuel supply. A bad fuel filter blocks and prevents the fuel from making its way to the engine. As a result, the engine will lose power.

Fluctuation in power occurs mostly when the vehicle is under stress. That being said, you might not notice power loss during normal operating conditions.

Engine stalling means sudden shut off of your vehicle engine without any previous warning signs.

There are many reasons for an engine to stall; some of these reasons can be very complicated, while others can be as simple as a bad fuel filter.

Thus, if the engine stalls right after pressing the gas pedal, its most likely the fuel pump.

As we mentioned earlier, a bad fuel filter can affect the engine’s power generation resulting in engine stalling. In more severe conditions, a completely clogged engine can prevent you from starting your vehicle.

While issues with engine starting can be related to a bad fuel filter, this sign is usually less frequent. Therefore, the mechanic has to eliminate all possible reasons for the engine not starting, including issues with the fuel, starter, and others; then, he can confirm that the bad fuel filter is the culprit.

Engine misfire happens due to many different reasons that could affect either the oxygen, the spark, or the fuel. Your vehicle’s engine follows a certain pattern to fire each one of the mentioned components. If this pattern got affected, the engine would not perform properly, and a misfire occurs.

A bad fuel filter prevents smooth fuel flow to the engine. Therefore, the engine will not follow the firing pattern needed as less fuel is supplied. As a result, your engine will misfire.

It is hard to say that a bad fuel pump caused the engine misfire. It usually goes the other way around. In other words, the mechanic would eliminate all the other factors to be able to say its the fuel pump.

The fuel pump can be damaged due to low lubrication, debris making sitting in the fuel tank, and probably a bad fuel filter.

While the fuel pump can be damaged from all the mentioned reasons, a bad fuel filter is very likely to be the culprit. As the fuel filter gets clogged, it creates a higher presser on the fuel pump, causing it to fail.

Smelling anything weird coming from the vehicle is a bad sign, and it must not be ignored. Ignoring these smells can lead to complicated vehicle problems resulting in higher repairs, if not a complete vehicle failure.

It is hard to say that any bad smell coming from the exhaust is related to a bad fuel filter. This is because the problem is usually related to issues with other components like the catalytic converter, for instance.

In general, whatever the cause was, if you smell anything weird coming from the exhaust system, you must have an experienced mechanic take a look at your vehicle immediately. The mechanic will be able to pinpoint the actual cause of the problem and suggests different repair scenarios.

It might sound like a clogged fuel filter can improve the overall vehicle’s fuel economy. However, this is not the case.

When the fuel filter goes bad, it will not allow the required amount of fuel to pass through and get to the combustion system. As a result, the engine will force the pump to send more fuel to generate a very small amount of power.

Therefore, it is not unlikely for a bad fuel filter to cause a significant reduction in fuel economy.

When do I need to change my vehicle’s fuel filter?

A rough estimate indicated that you need to change the fuel filter once every 50,000 miles or every five years. While this number might be true, it is recommended that you’ll get a new filter more often and at around 10,000 miles.

Changing a fuel filter frequency can differ by vehicle make, model, and year. To get accurate information, it is good to check in the vehicle owners’ manual. If you don’t have a copy of your vehicle’s owner’s manual, you can find documentation online or research for information about similar vehicles.

The frequency of changing your fuel filter can also depend on the type of fuel you’re using and the environment that you are driving in. For example, if you use a fuel that is not very good, you might need to change the fuel filter more often than when using a very good fuel. Similarly, if you are driving on unpaved roads most of the time, you might need to change your fuel filter much more often then driving on perfectly paved straight.

In the world of automobiles, mechanical repair costs include the costs of the actual parts and the hourly cost for the labor. It is not very rare to have labor costs much higher than the parts costs. That’s why many people tend to go to small repair shops to get their vehicles fixed.

The fuel filter is a very important component in your vehicle as it ensures clean fuel is used in the combustion system. Over time of use, the fuel filter gets clogged with larger particles coming from a dirty fuel or the walls of the fuel tank.

Like any other component in the car, you must replace your fuel filter at least once every five years or every 50,000 miles. Failing to replace the fuel filter at the right time can cause significant engine problems.

It is important to keep an eye for bad fuel filter symptoms like engine stalling, misfire, check light illuminating, and others. This way, you catch the problem early and prevent getting involved in much more complicated problems that require high repair costs.

Replacing the fuel filter requires about $100 to $150, including both parts and labor costs. While there might be some time and effort needed to get your fuel filter replaced, this problem needs to be addressed as soon as possible to avoid dealing with significant repairs like a complete engine failure.