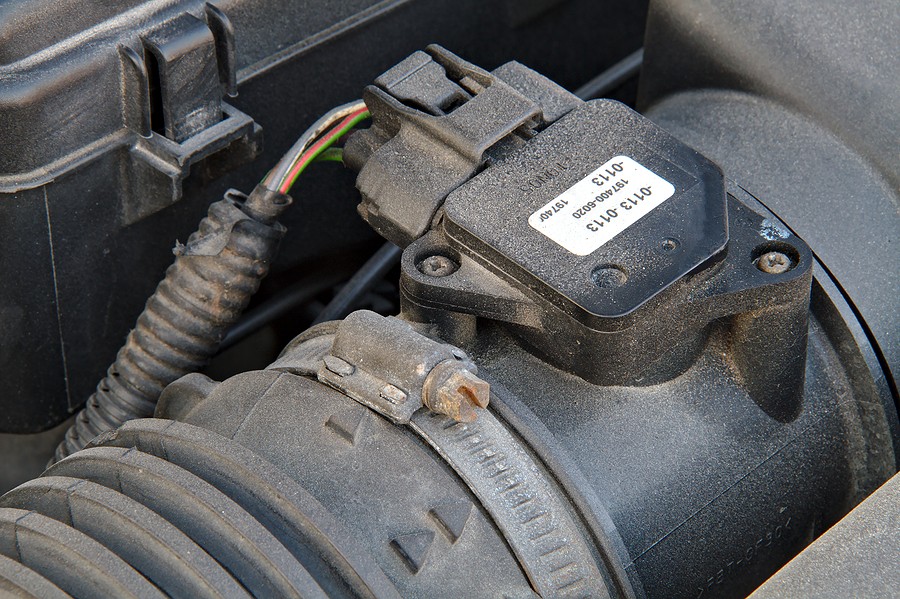 Multiple parts within your vehicle require regular maintenance and cleaning to keep your car running at a high-performance level. The mass airflow sensor is no different – keeping this part clean, clear of debris, and ensures that your engine and transmission work together in a healthy and efficient way.

Learning how to clean the MAF sensor can positively affect the flow rate of air and fuel into the engine, ensuring the air and fuel mixture is at the right ratio to operate in your vehicle. Let’s see the mass airflow sensor’s main function, the most common MAF sensor symptoms, and the replacement steps.

The mass airflow sensor is a mechanism in your vehicle that is used to determine the flow rate of air entering the engine. This sensor detects any events or changes in the vehicle’s environment, used in tandem with other parts to alter the internal combustion engine’s airflow.

If the MAF sensor is not working correctly, the ECU will not get the right reading, and you will have to learn how to clean the MAF sensor.

There are two main types of mass airflow sensors used in vehicle engines in the modern market today. These two types of mass airflow sensors include the vane meter and the hot wire in fuel injection engines. EFI engines measure the pulse width modulation signal and alter the airflow by working with the intake air temperature sensor. If the IAT sensor is not working correctly, you will have to learn how to clean the MAF sensor to provide a proper reading.

The volume airflow sensor functions to measure and analyze the airflow into the engine. The vane meter responds to the airflow proportion within the engine, responding to the amount of fuel injected. Many volume air flow sensors have an air-fuel adjustment screw that controls the air and fuel mixture ratio by letting a certain amount of air through the air flap.

The vane meter has some advantages and some significant drawbacks when learning how to clean the MAF sensor and keep your car running at a high-performing level. The disadvantages of this type of MAF sensor include the restricted airflow, the lack of a suitable mounting location within your engine, the orientation of your vane with respect to gravity, and the fuel pump control issues.

The hot wire mass airflow sensor analyzes and determines the mass of air flowing into the air intake system. The hot wire sensor heats a wire within the engine's air stream by applying a constant voltage to the wire, increasing the electrical resistance and the electrical current flowing through the circuit.

As more current flows past the sensor, the wire’s temperature increases until the resistance reaches the proper balance once again. For the hot wire sensor to work correctly, you need to learn how to clean the MAF sensor.

Some benefits of the hot wire sensor MAF compared to the vane meter are that this type can respond quickly to airflow changes, has a smaller overall package, is less sensitive to the mounting location, and is less expensive. The disadvantages of the hot wire MAF Sensor include the dirt and oil contaminating the hot wire, installation requiring a laminar flow, and the sensor containing a thin platinum wire.

When looking at how to clean the MAF sensor, you also need to know the signs of a damaged mass air flow sensor so that you can determine when it is working correctly and when it needs to be fixed or cleaned.

Rough engine idle due to the MAF is a common problem and can be pretty difficult to diagnose. Since several mechanisms and factors come into play, it can be hard to pinpoint the exact issue. How your engine is idling is a good indicator of its overall health and how long it is going to last, meaning what if you address the problem quicker than you can save potential expensive repairs or replacements in the long run.

You can tell your vehicle is having a rough idle if there is a shaking and bouncing sensation in the vehicle, and you feel like the car is vibrating too much while your car is not moving. Although some cases are less severe than others, the rough idle is usually pretty identifiable by both the driver and passengers. The rough idle can mean you need to learn how to clean the MAF sensor.

In addition to the vibrations, you might also notice strange sounds when the car is running rough idle when cold. Along with the strange sounds coming from your engine and under your hood, there might be an inconsistent engine RPM while you are driving and accelerating. Typically, a healthy vehicle will have a smooth RPM that stays at a consistent level of around 1,000 revolutions. If the RPM is below 1,000 revolutions, this means that you need to learn how to clean the MAF sensor.

If your car has a bad mass airflow sensor and computer, you need to learn how to clean the MAF sensor for it to work properly, the lack of information provided from the fuel and air mixture from the sensor can cause your computer car to malfunction. If the engine control unit can’t gain the necessary information to adjust the ratio of air and fuel within the engine accordingly, this can cause the MAF sensor not to work correctly.

If the ECU is not getting the right data, then this means you need to learn how to clean the MAF sensor so that it can send the correct information to the computer.

Suppose there is an excess amount of fuel being pushed into the cylinder of the engine. In that case, this can cause your fuel and air mixture to run too rich – meaning the ratio of fuel and air is incorrect even when you aren’t turning on and using your car’s engine, the fuel pump will continue to deliver the same amount of fuel to the engine.

This reduces the overall engine efficiency, leading the MAF sensor not to work correctly. If there is a reduced fuel economy, you need to learn how to clean the MAF sensor so that you can get the proper air and fuel ratio again.

Faulty o2 Sensor – The oxygen sensor in your car is a vital component of the fuel and emission system. These parts function to monitor the amount of oxygen located in the exhaust. After gathering this day, the o2 sensor transmits the number to the engine’s central computer, which then adjusts the engine’s air and fuel ratio according to the data it received.

If the o2 sensor is getting information that suggests the engine is running rich, the sensor will communicate to the engine control unit to add less fuel. This means that less fuel will be added to the engine during the combustion process, causing the engine to run rich. Keeping your o2 sensor at a healthy level involves you learning how to clean the MAF sensor.

Clogged MAP Sensor –  If the o2 sensor is getting information that suggests the engine is running rich, the sensor will communicate to the engine control unit to add less fuel. This means that less fuel will be added to the engine during the combustion process, causing the engine to run rich. If your MAP sensor is clogged, you need to learn how to clean the MAF sensor and the MAP sensor.

Faulty Engine Coolant Temperature Sensor – As we know, coolant is the liquid in your vehicle that cools down the engine’s internal parts to prevent excessive friction and overheating. Without the right level of coolant, the engine’s metal parts will rub against each other at high speeds, causing a buildup of heat and leading to a quicker breakdown. This faulty ECT sensor can cause engine issues, leading you to need to learn how to clean the MAF sensor.

Broken Intake Temperature Sensor – The intake temperature sensor in your car analyzes and monitors the air temperature entering the engine. This sensor tells the other parts of your car how cold or hot the air is, allowing the engine to adjust accordingly.

The engine’s computer, also known as the powertrain control module, then analyzes this data. The powertrain control module will then alter the engine’s air and fuel mixture to get the proper ratio and air density. Without the proper air and fuel mixture, you need to learn how to clean your MAF sensor so that you can keep your car at a healthy level.

Fuel Smell – No driver wants to smell fuel in their car. However, this problem can be fixed by determining the cause of the engine running rich. If too much fuel is going to the combustion chambers for the internal combustion, this means that some of the unburnt fuel will enter the exhaust system and cause the undesirable smell. Learning how to clean your MAF sensor can prevent the fuel smell and engine running rich.

Lower Fuel Economy – One of the most noticeable and prevalent engine running rich symptoms is a lack of gas mileage and reduced fuel efficiency compared to your car’s normal performance level. This is due to the car not requiring all of the fuel being supplied by the parts, resulting from improper data being sent by the engine’s sensors.

High co2 Levels – As we know, carbon monoxide is a dangerous gas that no one wants to breathe in. The catalytic converter consistently functions to remove any co2 emitting from the exhaust. If you notice engine running rich symptoms, this means that too much gas is being produced, leading to impure air quality and a low emissions level. The high co2 levels mean you need to immediately learn how to clean your MAF sensor to keep your car running at a high-performing level.

How To Clean the MAF Sensor Steps

When looking at how to clean the MAF sensor, you need to learn when to replace the sensor and the necessary steps to keep your car running at a healthy level for a long period of time.

The first step is to pull off the air duct between the air filter box and the throttle body. This air duct will allow you to see how the MAF sensor is attached to the system. If you see a certain type of screw, called Torx screws, you will need to purchase specific tools so that you can remove the screws safely.

With the mass air flow cleaner and the required tools ready to go, locate the air duct’s MAF sensor. This MAF sensor will be positioned between the air filter box and the throttle body. Before you go ahead with removing the sensor from your car, use the camera to record the sensor. This lets you easily check and do the same process again in the future.

Next, remove the sensor from the air duct and disconnect the electrical wires that are holding it in place. After this, you will start the steps of how to clean the MAF sensor. Spray 10-15 spurts of the cleaner onto the wire or the plate. Make sure you do not scrub the parts to damage the wires of the plate. The last step is to allow the MAF sensor to dry before reinstalling it into the car.

The typical cost to replace a mass airflow sensor will oftentimes revolve around the type of your car, the make, the model, type year, and the place where you get the procedure done.

The biggest factor in determining how much you will pay for the MAF sensor replacement comes down to the specific car. Many mass airflow sensors range between $100 and $150 for the parts, but you might end up paying upwards of around $400 for the parts for very nice and luxury cars.