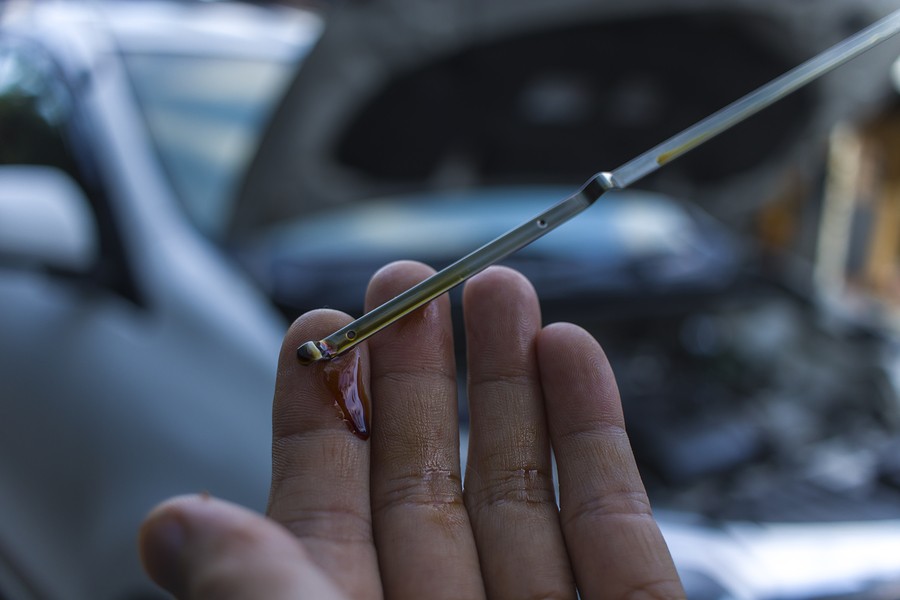 If your vehicle's oil smells like gas, then it is most likely that some gas fount its way to the oil pan.

Oil and gas are the primary fluids in any vehicle. Each one has its job, and it should not be mixed.

In some instances, your oil might smell like gas. The gas smell is an indication of a gas-oil mixing.

While gas-oil mixing will not prevent you from driving, it is not a good idea to ignore the issue to avoid any consequences.

You need to understand what are the leading causes of gas-oil mixing to help you fix the causing problem and probably prevent future gas-oil mixing.

The causes for gas-oil mixing can range from problems in the engine's components (e.g., faulty fuel injector) to issues with driving habits.

In this article, we will walk you through how can a gas leak into the oil pan, what are the leading causes for oil gas smell, and how to prevent gas from getting mixed with oil in the future.

How Does Gas Get Mixed with Oil?

Gas and oil are stored in different locations in the vehicle, and in ordinary cases, they do not get mixed.

The engine consists of several cylinders (four, six, or eight). On top of the cylinder, there are the pistons that are covered with piston rings. The piston rings are responsible for keeping the combustion system sealed and help prevent oil or other fluids from coming into the cylinders.

For the combustion system to work successfully, there should be a specific air-fuel ratio. If more fuel entered the cylinder than the optimum, the vehicle is called driving on “rich fuel.”

The spark plugs, who are responsible for igniting the fuel, will not be able to ignite this fuel and the excess fuel can find its way to leak out of the piston rings and get to the oil pan.

It is not unlikely to have some of the fuel entering the oil pan; however, a larger amount of fuel can cause a strong gas smell in your vehicle's oil. Usually, the problem will be bigger than worn piston rings, and it could be a faulty fuel injector.

When is Gas Considered “Too Much”?

As we mentioned before, if the amount of gas entered the oil pan is not “too much,” then it is not a big issue, and the heated oil can simply vaporize the gas and get rid of it.

The question that many people get confused about is, “how much is too much?”

Based on many experts' recommendations, if the oil pan contained more than 2.5% of gas, then this is “too much,” and you need to address the problem as soon as possible to avoid further consequences.

One way to measure the amount of gas in the oil is to use a dipstick. Simply remove the dipstick, wipe it clean, insert it back, and measured the oil. The first sign is to smell the dipstick, and if the smell is too strong, then this is an indication of oil containing more than 2.5% of gas.

If you do not have the dipstick or can not use it for any reason, then you could simply monitor the gas smell in the car. In general, if you were able to smell a strong gas smell, then you can tell that there is more than 2.5% of gas in your oil. The oil can simply dilute any amount of gas less than 2.5%; that's why you will not notice the smell until the gas is in higher quantities.

What Are the Main Causes for Oil Smell Like Gas?

While the primary reason for the gas smell in your vehicle's oil, there are other common reasons you should be aware of. Knowing the causes can help you efficiently fix the issue and get rid of this strong gas smell.

If most of your trips are within the city, then you will have the gas smell in your oil more frequent.

As we mentioned earlier, the oil pan heat can help vaporize small amounts of excess gas leaking to the oil pan. However, driving short distances might not give the oil pan the required time to heat enough to be able to vaporize the excess gas.

In any vehicle engine, there should be a specific ratio of air to fuel. If the fuel entering the cylinder were higher than the required, the combustion chambers would not be able to ignite all the fuel, and the excess fuel will get its way to the oil pan.

While there are many reasons for a rich fuel mixture, some of the leading causes could be issues in the oxygen sensor, problems in the mass airflow sensor, or damaged MAP sensors.

The fuel injector is one of the most critical vehicle parts when it comes to the air-fuel mixture and, therefore, oil gas smell issues.

If the fuel injector had issues or was faulty, then it will allow more fuel than needed to pass to the cylinder. Therefore, the excess fuel will reach the oil pan and cause the gas smell.

The piston rings are the part responsible for sealing the combustion system and prevent fluids from leaking to or from the cylinders to the other parts of the vehicle.

Engine misfire can happen due to many reasons varying from only IAC valve issues to a damaged fuel injector.

Despite the reason for the misfire, there is a high potential that the gas can leak to the oil pan during engine misfire.

The engine misfire affects the entire combustion cycle by preventing complete air-fuel ignition. If the fuel were not wholly burnt, the access fuel would leak into the oil pan to give it the gas smell.

It is sporadic for someone to put gas instead of oil in the engine's oil location.

However, some inexperienced motorists might have done this by mistake.

Another common mistake for putting gas instead of oil is by mixing up containers.

Some people use containers to fill their gas tanks. They might use an oil container for the filling process. Then, they might take this used oil container and pour it in the oil location by mistake.

Therefore, it is recommended that you avoid using random containers to fill your vehicle's gas tank.

The fuel injector should close itself automatically after allowing the required amount of fuel to pass through to the combustion system. However, in some instances, the fuel injector gets stuck into the piston and stay open.

The opened fuel injector can simply allow substantial amounts of fuel to enter the combustion system and therefore leak to the oil pan. This significant amount of gas can cause an overpowering gas smell in the oil.

Not changing the vehicle's oil will not directly cause a gas smell in the oil.

As we mentioned before, a small amount of gas leaking to the oil will not have any impact, and you might not even notice it. However, if this amount of gas builds up and you do not change the oil that often. Once the gas passes 2.5% of the oil quantity, you will start to notice the gas smell in the oil.

If you have a more modern car, you will not see the carburetor.

What Are the Symptoms of Gas-Oil Mixture?

Like any other issue in the vehicle's system, if a large amount of gas found its way to the oil pan, you will notice some common symptoms, including:

When a large amount of gas mixes with your vehicle's oil, the first sign will be a strong gas smell in the oil.

The gas smell is strong enough to smell it while driving; you do not even need to open the oil port to check and feel it.

If you are concerned about issues with your combustion system, the first thing that you need to monitor is the smoke coming out of the tailpipe.

If you noticed an opaque white smoke coming out of the tailpipe, then this is a clear sign about rich fuel. As a result of the expensive fuel, there is a high potential that the excess fuel is leaking to the oil pan.

When you test your vehicle's oil level, check the smell of the dipstick. If the dipstick smells like gas, then there is gas leaking to your oil pan.

Look also at the behavior of the oil when it drains off the dipstick, if it drains faster than usual, there is an indication of gas in the oil.

The oil level in your vehicle should not increase. If you noticed a significant increase in your oil level, it means that a fluid made its way to the oil pan. Most likely, this fluid is gas.

What Will Happen if Gas got into the Oil Pan?

There is no major immediate problem if gas mixed with oil in your vehicle. However, for a longer time, there might be some consequences that you need to avoid.

Oil is considered more “viscous” than gas. The characteristics of oil give it more lubrication than gas.

If a large amount of gas got mixed with the vehicle's oil, the oil would gradually lose its lubrication characteristic.

Once the oil reduced its viscosity and lubrication, the system will start to wear and tear much faster. The oil characteristics slow down the components wear.

Therefore, fixing the gas-oil mixing issue can prevent more severe problems and can save you a lot of repair costs in the future.

If the oil lost its lubrication and became less viscous, it is much harder for the engine to cool down.

An overheated engine can result in severe damages to the internal components that you do not need to deal with. Therefore, consider preventing gas from mixing with oil as much as you can.

If large amounts of gas leaked to the oil pan, then you are wasting lots of gas. With more gas wasted, you will have less engine power than usual. As a result, you will notice a significant drop in your fuel economy.

Therefore, you might need to evaluate the cost of repairing gas-oil mixing causes versus the enormous losses in fuel economy.

Oil and gas are two different fluids in your vehicle. These two fluids should not be mixed at any time.

There is no problem when a small amount of gas finds its way to the oil pan in the car. However, you need to pay attention when more significant amounts of gas get mixed with your vehicle's oil.

Many reasons can cause gas to leak to the oil pan, including running on rich fuel, problems in engine's piston rings, and some cases, damage in the fuel injectors.

It is recommended that you fix the cause of gas-oil mixture to avoid significant consequences where gas can impact the oil's viscosity, significantly reduce fuel economy, and cause faster wear and tear to the internal engine components.