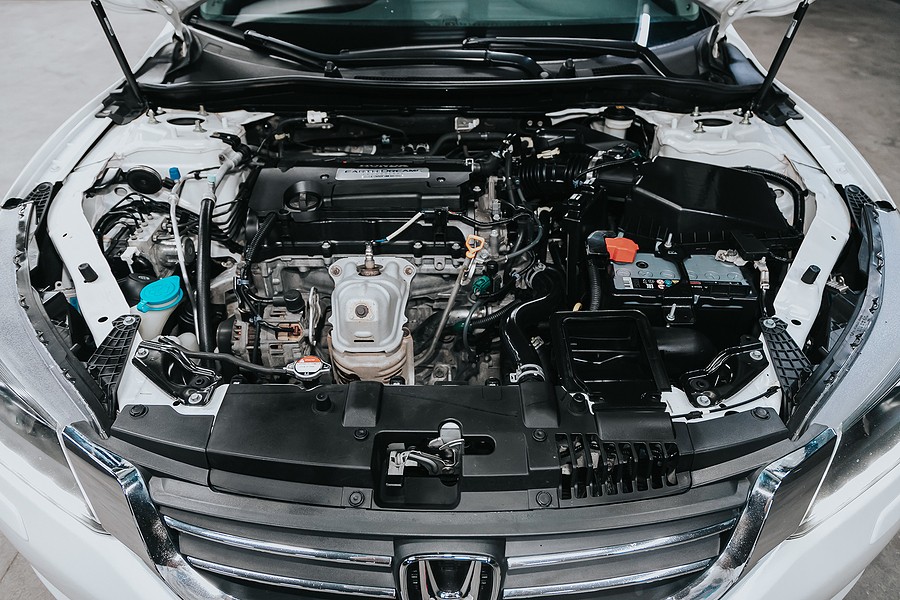 You could have a problem with Honda oil dilution if you have a Honda Civic or CR-V with a 1.5-liter turbo engine. This issue affects more than a million Honda CR-Vs and Civics. Reports of gasoline mixing with engine oil came from owners of these Honda models.

As transcribed from a video of American Honda Motor Co. the automaker has begun notifying owners in cold-weather states about potential issues leading to oil dilution. It was said that fuel is sprayed directly into the cylinder by the engine's direct injection system.

And that during engine operation, a small amount of the sprayed fuel can adhere to the cylinder walls, move down the crankcase, and mix with the engine oil in the oil pan. Later, the vaporized mixed fuel in the pan is usually led back to the cylinder and burned off. The oil will be diluted by the gasoline if there is more fuel mixing with the engine oil than vaporizing.

In short, excess, unburned gasoline mixing with engine oil in an engine crankcase results in fuel dilution in oil. The thinning effect of hydrocarbon-based gasoline, which has a lower vapor pressure than the lubricant, reduces the oil viscosity.

Owners of Honda affected reportedly complain that they can smell raw fuel inside the cabin and also outside the vehicle. This could come from the gasoline being able to seep into the engine oil. With this owners have raised valid concerns regarding the durability of the 1.5-liter turbo engine and worried about the vehicles potentially stalling in cold weather.

In California and Texas problems in the summer months have also been reported according to Consumer Reports. Valid concerns as oil dilution could eventually result in catastrophic engine failure. The problem also caused a wide range of responses coming from different countries, not excluding stop sales and service campaigns.

With the Honda oil dilution driveability issues may arise and that includes misfires and a “whirring noise” from the engine compartment. Cold weather, according to Honda, can exacerbate problems.

According to Honda, their efficient engine design does not waste any heat. If not powered in a way that enables the engines to completely reach operating temperature, which would usually burn off the contaminants, the engine will produce condensation and excess fuel vapors rather than combustion.

This may also explain why people have trouble warming up their cars when they are idling. To help the engine warm-up and avoid oil dilution Honda suggests restricting extended idling, using a block heater, driving in lower gears at the start of trips, and driving for longer distances.

For owners of the 5th generation CR-V and 10th generation Civic, oil dilution is a known problem. What are the implications of using diluted oil? There are quite a few in this situation.

How much fuel dilution is too much? The findings are usually expressed as percentages, with a cautionary limit of 1.5 percent and a vital limit of less than 5%. There is a chance of engine fire when fuel levels are much higher than 5%.

It was alleged that Honda has hidden an engine manufacturing defect of the said model year CR-Vs and Civics. It was the defect that made it more likely for the oil in the engine to be diluted. Three CR-V owners who lodged their complaint in the federal court of Minnesota said that the oil dilution resulted in “decreased oil viscosity, premature wear and ultimate failure of the engines, engine bearings, and other internal engine components and an increased cost of maintenance.”

According to the complaint of the Honda oil dilution class-action lawsuit, notably, and as a result of that engine defect, the engine oil in the vehicles will lose its original viscosity, indicating that the oil's lubricating properties will deteriorate and it will be less capable of withstanding the higher loads of an internal combustion engine.

This can cause metal surfaces inside the engine to come into contact, resulting in rapid wear of internal bearings, the rotating assembly, and other internal parts that depend on lubrication to work properly.

According to Top Class actions as a result of Honda oil dilution, the vehicles could either fail or stall unexpectedly, leading to potential danger on the roadway. The complainants said that Honda had been aware of the flaw for “a long time,” but chose to keep it hidden from potential buyers. The class action litigation alleged that the Honda oil dilution defect had been reported to the National Highway Traffic Safety Administration as well as the car manufacturer.

Honda's inability to recognize the defect resulted in unexpected repair costs and potentially unsafe conditions for owners and lessees of the cars. The three-car owners also argued that the vehicles affected by the defect lost value.

As a result, many owners and lessees of the said Honda vehicles requested that Honda remedy and/or address the engine defect and also the resulting damages at no cost. The complainants also said that Honda failed and/or refused to do that, often conveying to the car owners and lessees that the vehicles are operating as intended so they cannot be repaired under warranty or otherwise.

The Honda oil dilution class-action lawsuit claims the car manufacturer attempted to shift the blame onto customers who complained about the issue under the terms of their five-year, 60,000-mile Powertrain Warranties as they were told it was their fault for not driving the affected vehicle longer distances.

It was said that too many short-distance trips during cold weather aren’t allowing the engine to sufficiently heat up to burn off the excess vapors. While it’s true that short trips aren’t good for any engine, the fact is that 2016 and older Honda owners aren’t actually the first group to take short trips.

So, why has there been a higher-than-average number of concerns about dilution problems in the 2017 and 2018 CR-V, as well as 2016, 2017, and 2018 Civic? On the CR-Vs that were allegedly affected by the oil dilution fault, Honda failed to patch, replace, or issue a recall in a timely manner. The automaker had also made no offer to compensate owners and lessees for costs incurred as a result of the defect.

Members of the class will also request a claim form to be reimbursed for vehicle maintenance costs incurred as a result of the suspected defect. Towing, such oil adjustments, and diagnostic costs are all potential expenses. With their argument, class members must provide proof of the expenditures and that they were linked to the alleged oil dilution defect.

As a result of the dilution problem, Honda has extended the warranties on more than 1 million CR-V SUVs and Civic cars in the U.S. The consumers will be able to get an extra year of coverage on some of its powertrain components for 6 years from the time of purchase and that is without mileage limits.

Both 2017 to 2018 CR-Vs and 2016 to 2018 Civics with the 1.5-liter turbo engine are covered under the extended warranty. Honda claims, however, that the oil dilution problem is uncommon and that it is taking steps to give customers peace of mind.

Honda's manager of car promotions and recalls, Brad Ortloff, said in his memo sent to dealers, that oil in these engines may be diluted due to software settings or possible hardware faults. Some automobiles may have a power shortage, resulting in cylinder misfires or engine noise. The memo indicated that qualifying owners will be duly informed.

According to Honda, some degree of oil dilution is normal in vehicles with the 1.5-liter turbo engine, and there would be no drivability problems or unusual engine wear in most cases.

Honda's service campaign was originally limited to owners in five cold-weather states: Maine, Minnesota, North Dakota, South Dakota, and Wisconsin when it was first announced in October of 2018. As parts became available, more states would be added, bringing the total number of states to 21.

Keep in mind that this is a severe cold weather problem that affects drivers who seldom travel more than very short distances, often before the engine has had a chance to warm up properly. As a result, in terms of total CR-V sales volume, it's not very popular in the United States (nearly 380k sold last year in the United States.

Honda US had changed their tune by May of the following year. The service campaign is now available in all 50 states, and Honda US has also expanded the powertrain warranty for over 1 million cars. The extended warranty is the same as Honda Canada's, which covers the vehicle for six years from the date of purchase with no mileage restriction.

Honda, as mentioned earlier has provided an extra year of coverage, and said the oil dilution in the Civic and CR-V 1.5-liter engine happens rarely. Honda has also released an update for these Civic/CR-V models, urging owners from areas with colder climates to take their vehicles to a dealer for repairs.

According to WardsAuto, Honda spokesman Chris Martin says the improvements include transmission and engine software adjustments that enable the engine to warm up faster, which reduces the risk of un-evaporated fuel accumulating in the engine oil early in the drive cycle.

In an attempt to solve the Honda oil dilution problem Honda US service campaign includes:

These improvements, according to Honda, will allow the engine to warm up faster and boost fuel combustion.

Some owners, however, claim that Honda dealers have informed them that engine oil pollution is natural and that they have been refused warranty coverage for the required repairs, forcing them to pay for new engines and repairs out of pocket.

If you find gas fumes in your Honda Civic or CR-V and your oil level is above the full mark, you should visit your local Honda dealer to report the problem. Make sure you keep track of it by having a comprehensive maintenance invoice and ask the service advisor to write “no patch is available” if they say your car doesn't need to be repaired. If the issue persists, keep taking your car back. And if they can't adequately fix the issue or maintain they don't have a solution, you have rights under lemon laws to pursue recourse.

Owners of the above discussed Honda models have reported that, despite receiving a software update designed to fix oil dilution the issue persists. For some, the cabin still smells of gasoline, while others lose acceleration and suffer from disruption to core vehicle functions, including steering ability leading to premature engine wear.

Although Honda dealerships have acknowledged that these are issues on the 2017-2018 model years, they still believe it has been addressed for the 2019 model year. The bottom line is that if you already own these Honda model years I hope the article can help you somehow fix the issue but if you’re still planning on purchasing then you must be willing to take the risks.