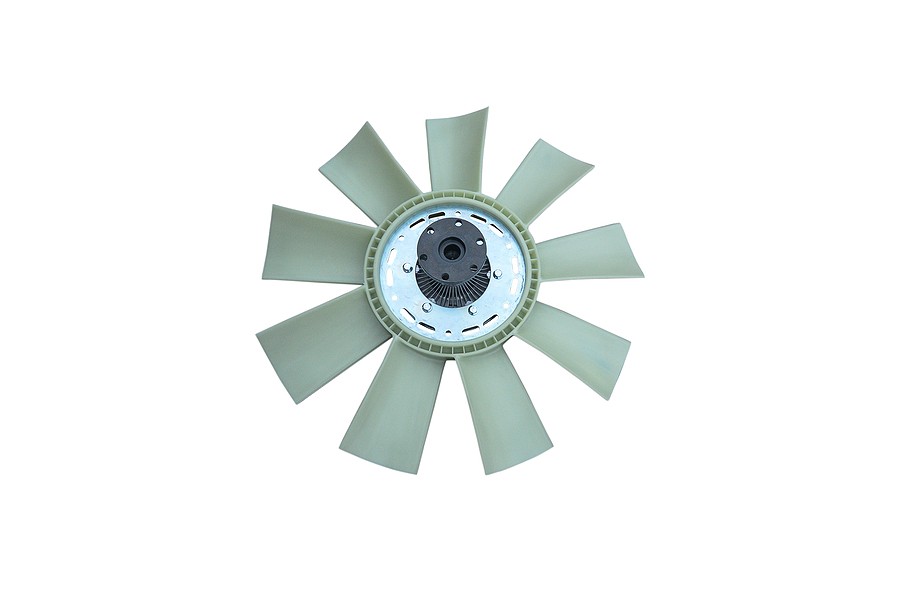 What is the fan clutch?

In order models, the fan clutch is oftentimes completely controlled by the temperature of the engine in comparison to the engine speed. As the clutch heats up and the friction gets stronger, the parts inside of the engine can rub against each other and build up more heat. This also causes the fan to rotate closer to the speed at which the engine is moving.

When the fan clutch cools off, the engine fan slows down due to the reduction in the amount of friction produced within the engine. This, however, can vary spending on the engine speed decreasing or increasing suddenly. As the state of the clutch changes, this determines how fast or how slow the fan is able to speed up or slow down during use.

The goal of the fan clutch is to prevent the engine fan from running unless it is absolutely needed due to the high amount of friction, providing more of the power within the engine is used for the operation and performance of the vehicle instead of cooling down the parts. Electronically controlled fan clutches work in the same way, but they are controlled by a control module instead of a mechanical piece.

The fan clutch is in charge of spinning loosely until the temperature reaches a certain level, at which point the fan clutch will fully turn on and engage so that the fan can work at the highest efficiency and performance level. Usually, a bad or failing fan clutch will produce some symptoms that you can notice and alert you to the overall price of a fan clutch replacement cost.

One of the first signs and symptoms that is generally associated with a bad or failing fan clutch is an overheating engine. The fan clutch is responsible for controlling the operation of the cooling fans. If the fan clutch is not working or not engaging properly at all, this can disable the fans or prevent them from working at the optimal level and working at maximum efficiency. This might result in the engine overheating, which can lead to additional issues and a more expensive fan clutch replacement cost over time and if left unattended.

Another common symptom that most drivers and passengers will notice as a sign of a failing fan clutch is an excessively loud cooling fan in the car. If the fan clutch gets stuck in the engaged position, then this can mean the fans will continually run and turn on even when it is not desirable for them to be on and the driver does not want them to be running. This might result in an excessively loud engine from the fan blowing at full speed, blowing out cold air and running at a very high level.

A decrease in your car’s performance abilities and the fuel efficiency can be a key sign and symptom of a bad or failing fan clutch. A faulty fan clutch that leaves the fan constantly engaged will not only cause a very loud and noisy engine, but can also cause a decrease in performance and the engine abilities. A stuck fan clutch can cause a higher amount of pressure and drag on the engine, and can lead to a drop in power, acceleration, and fuel efficiency. This can sometimes be very noticeable and cause a huge drop in miles per gallon.

Can I drive with a bad radiator fan clutch?

Vehicles with a fan clutch that has failed or with a seized fan clutch can be operated for a very long time but the engine might lack power. This means the fuel economy and the miles per gallon can greatly diminish, and the engine will run a lot cooler and at a lower temperature than its optimal operating temperature, showing a clear sign that the fan clutch replacement cost might be high.

This can eventually cause other issues in your car, like high levels of carbon buildup or catalytic converter failure, but the vehicle will continue to operate, just not at the optimal level. A fan clutch that fails or is damaged should be immediately replaced,

How often does the fan clutch replacement need to occur?

The average failure rate of the radiator clutch fan shows that the fan clutch failure that needs replacement is most typical around an average of 140,00 miles. This is no guarantee, but the repair data has shown that around 140,000 miles are the average rate for failure and the average time of fan clutch replacement. Most vehicles that use fan clutches are older cars, and they might not be in the best operating condition, but these are most likely to have this component replaced at some point during its life, showing the overall fan clutch replacement cost.

How are fan clutches replaced?

First, you will need to identify the nut size that you will have to use. Each fan clutch will have its own mounting nut size which can range between 22mm to 36mm depending on the type of company and the manufacturer.

After you have removed the fan clutch, you can install a large crescent wrench onto the fan clutch nut. This lets you loosen the fan, which you will have to continue doing by rotating the fan in the same direction while watching the threads. If the nut is not turning, you can use the wrench to help it along.

The fourth step is to replace the fan clutch, which you will need to accomplish by removing the four-six 10mm bolts from the fan clutch that holds it to the blade itself. Once the bolts are removed, reinstall the fan clutch down in front of the water pump, ensuring you do not contact the radiator or damage the plastic fan blade.

Make sure that you keep a few things in mind when you are dealing with the radiator fan clutch. Never touch a fan while the engine is running and the ignition key is on. Especially if the fan clutch is permanently seized and not working, the fan will be spinning at the same speed of the engine, with the full power of the engine pushed behind it.

This can easily mean that you can cut your hand or your arm. Make sure you wear tight fitting clothing and never wear loose clothing while leaning over the engine compartment. If the loose clothing becomes trapped, the fan can pull in the clothing. Keep these important steps in mind when figuring out the total fan clutch replacement cost.

There are certain procedures that you might need to have done in your car that are directly related to the radiator fan clutch replacement cost. By determining that you need to get this done, you can figure out what else you will need to have repaired or replaced in your vehicle.

One other repair that is related to radiator fan clutch replacement is the air conditioning condenser fan motor replacement, running between $319 to $424. The next repair is the oil change, which is a relatively inexpensive price, but costs between $141 and $165. There are key reasons you should never skip an oil change. The main reasons are to prevent poor vehicle performance, diminished resale value, a dirty engine that can be remedied, poor gas mileage, and avoid unexpected breakdowns.

Another repair that is related to radiator fan clutch replacement is the brake booster replacement, costing between $588 and $764. A brake booster is the part of your vehicle that is responsible for providing some extra braking power, relying on mechanical leverage to push hydraulic fluid with enough force to push the drum cylinders to both the front and rear wheels. This repair can also influence the radiator fan clutch replacement cost.

The most expensive repair that is related to the fan clutch replacement cost is the transfer case replacement, running between $2807 and $2904. The transfer case is part of the powertrain, referring to the vehicle's axles, differentials, driveshafts, drivetrain, engine, and transfer case.

The last two repairs that you might have to do in tandem with the fan clutch replacement is the fuel pressure sensor replacement, costing between $!69 and $!90, and the torsion bar replacement, between $372 and $399.

In addition, there are other average fan clutch replacement costs that can be useful in determining how much you will have to pay for repairing your vehicle. The lowest price out of these cars is the 2010 Ford F-250 Super Duty. the total estimate for this car is around $182, with the parts cost beating around $102, and the labor cost averaging $80. The second least expensive price is the 2008 GMC Yukon XL 1500, with the parts cost being $178, the labor cost being $80, and the overall estimate being $258.

The most expensive option when regarding the fan clutch replacement cost is the 2012 Chevrolet Corvette, coming out to $418. The parts cost is around $330, while the labor cost is around $88. The most expensive cost for the 2005 Buick LaCrosse, with the total price coming out to $553 and the labor costing $231, while the total parts cost being $321.