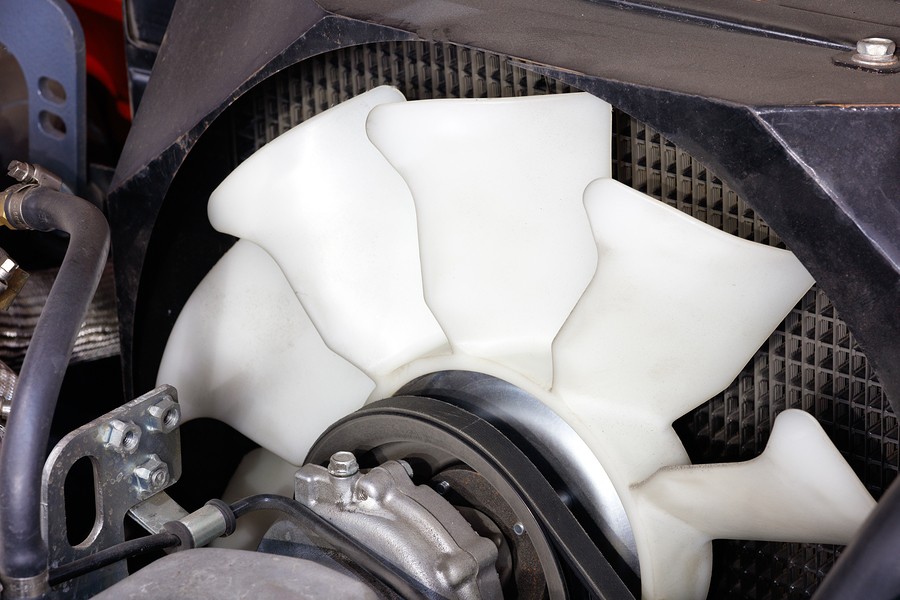 Within your vehicle, there are crucial components that directly relate to the smooth running and operation of your car. Without these parts working correctly, your vehicle will not be able to function at the optimal level.

If your car is running at a sub-par level, then there is a greater chance that other components can be negatively affected. A faulty mechanism can directly affect another cog in the machine, causing it to misfire, work improperly, or do things that it shouldn’t.

One part of the car that is imperative to a comfortable ride is the radiator fan. Without the radiator fan working, you will have a miserable time getting from point A to point B. The radiator fan is in charge of pulling cool air through the car’s radiator.

What Is The Function Of The Radiator Fan?

The radiator fan is positioned between the radiator and the engine, and is in charge of cooling the car. These cooling radiator fans are especially helpful when your car is moving too slow to obtain external airflow, or when you are stationary, and air can't move through the grille.

The electric cooling radiator fan, which turns on and off as needed based on the internal vehicle temperature, is an improvement over engine-driven fans that slow down a- usually at times when they are needed the most. A failed radiator fan can result in overheating your engine.

There are two basic types of radiator fans that will be in your car – either mechanical or electric.

Electric: This type of radiator fan is almost always found in modern vehicles, and are controlled by an electric motor. The engine’s computer is in charge of when the fan turns on and off, dictating the usage of the radiator fan based on the temperature of the vehicle.

History Of The Radiator Fan

The first clutch radiator fan was developed in the 1960s, and was put in cars by the early half of the 1970s. This type of clutch fan was produced in order to save energy, lowering emissions, and reducing waste. Before the clutch fan was invented, a fixed-style radiator fan was directly attached to the engine. This style of direct radiator fan is inefficient and produces loud noises while using. The clutch fan brought the technology to disengage when not in use, letting the engine work efficiently, save energy, and lessen fan noise.

How Does A Radiator Fan Work?

Since we know what a radiator fan is, the two types of radiator fan, and the history of the radiator fan, we need to now understand the step-by-step process of how a car radiator cooling fan works.

The thermo-reactive clutches used in this type of radiator fan are built to disengage when not in use, and become connected using grease that expands when heated. This type of unit uses shaft bearings and seals to retain lubricant. The clutches are typically bolted to the water pump of the engine.

A clutch radiator fan has the possibility of failing while in the process of doing its job. The first way this kind of radiator fan can fail is by locking up, which would directly cause poor mileage and a loud, whirring sound. The second way this fan can fail is by the silicone grease leaking, causing the fan to fail in pulling air through the radiator, making the cooling of the car impossible.

Step 2 – The electric radiator fan is the second type of fan and is used mainly to boost engine performance and reduce emissions waste. This type of fan is used in both front and rear-wheel-drive cars. Activated by a coolant sensor via the computer, the coolant sensor is in charge of monitoring the temperature of the engine’s coolant. If you have coolant sludge, then this is a sign of a broken radiator that might need replacing.

With the sensor detecting the temperature, it can alert the radiator fan if the coolant is above normal levels. A signal is then sent to close the fan control relay that is protected by a circuit fuse.

Since we know how a car radiator fan works, we are more likely to be able to detect if there is an issue with the fan itself. In order to determine if there are any issues with the radiator fan, we must perform a fan inspection.

To check a fan clutch condition, the engine must be off. Turn the ignition off and let your car cool. Next, inspect the clutch for any leaks at the front of the unit. Be sure to check the input shaft and expansion spring, since these are especially-prone spots to leak. Your radiator could be blocked or leaking, which causes your car to run hot.

If you found a leak, then the radiator fan clutch has failed and needs to be replaced. The next step is to take your radiator fan blade and turn it. If you can’t turn the fan blade, then the clutch has locked, or there might be an excessive movement that is erroneous to the function. If any of these cases hold true, then a replacement of the radiator fan is required.

Symptoms of a bad or failing radiator fan motor

After noticing during the fan inspection that something is wrong with your radiator fan or fan clutch, you now know you need to get a replacement. However, if you are able to notice the telltale signs and symptoms of a bad or failing radiator fan motor, you might be able to stop the problem before it gets worse.

The Cooling Radiator Fan Does Not Come On

The second symptom of a damaged radiator fan motor is that your car is currently overheating. The cooling fans are designed to turn on once a specific temperature has been met inside of your vehicle, or certain conditions have been reached. If the cooling fan is failing or damaged, the engine temperature will continue to rise, and eventually overheat.

Engine overheating could also be the result of other problems, so be sure to have your vehicle diagnosed by a professional before assuming it is your radiator fan.

If your cooling fan circuit fuse has blown, this is another sign of a problem with the radiator fan motors. If your motors fail or surge unexpectedly, then this can cause the fuse to blow. The fuse will blow to protect the rest of the system from further damage due to the unforeseen electrical surges.

The cooling fan motors are crucial to the cooling fan assembly, and play a huge role in the safety of your car, keeping the correct temperatures while idling and at low speeds. Since the radiator fan motors are so important, you need to bring your car to a professional technician to diagnose and repair your parts to keep your vehicle in a safe and working condition.

Can I replace the radiator cooling fan motor?

You can replace the radiator cooling fan motor. In order to do this, we have given a list of steps necessary to complete the change of the radiator fan motor in most vehicles. However, if you are not confident in your abilities, you should bring your car to a trained professional to diagnose and fix the issue. The average cost of replacing a radiator ranges from $300-$1200.

Step 1 – Make a note of the parts that need to be removed from your car. Look at the engine compartment area and identify anything that is in the way of your clear path to the radiator fan motor. You may need to remove some bolts, screws, and clips.

Step 2 – Disconnect the battery, which you will find inside the vehicle, preventing the radiator fan from being energized while removing. Disconnect the negative battery cable first before the positive cable, and then put them out of the way.

Step 3 – Remove additional obstructions from the area, such as ductwork, hoses, and bracketry.

Step 4 – Disconnect the electrical connector to the radiator fan and unplug it. You may need to use a small tool to pry away any dirt or debris that has settled on the connector.

Step 5 – remove all hardware that is currently holding the radiator fan in place. The mounting hardware is generally situated around the outside of the assembly.

Step 6 – Remove the radiator fan assembly from the vehicle so you can assess the damage, the issues, and ensure that you are clear to proceed to the next part of the process.

Step 2 – While holding the fan assembly a little bit above the work surface, hold the fan blade in one hand, and dislodge the fan from the shaft. This allows you to remove the fan blade completely.

Step 3 – Remove the hardware that holds the radiator fan motor in the housing.

Step 1 – Compare the original radiator fan motor to the replacement motor you are going to install in your vehicle. Ensure that the mounting positions are the same, the electrical connector is identical, the shaft diameter is equal, and the height of the fan blade rides is the same height.

Step 2 – Install the replacement radiator fan motor into the housing.

Step 3 – Place the fan blade on the shaft of the replacement radiator fan motor. If you have trouble doing this by hand, you might need to use a soft-faced hammer to gently tap the fan back in.

Reinstall Radiator Fan Assembly Back In Your Car

Step 1 – Place the radiator fan motor and assembly back into the correct space in your car.

Test For Proper Function Of The Radiator Fan Motor

After you have properly installed the radiator fan motor back into your car, it is important to ensure you did the steps correctly and test if your radiator actually failed. Start your engine and listen for any unusual noises that indicate a step was missed. Turn the air conditioning on and look to ensure that the radiator fan turns on. Lastly, you can get your engine up to the normal operating temperature, and see if the radiator fan continues to work.

The cost of replacing a radiator fan varies depending on the kind of car you drive and the specific mechanic shop you visit. We have listed a few of the most popular cars to give you an idea of the estimate, parts cost, and labor cost.

The total price of a radiator fan replacement varies drastically. For a 2008 Infiniti FX45, the parts are only $87, labor cost is $80, and the total average is around $194. This is the least expensive total cost on this list. The second-lowest-priced option is the 2012 Subaru Forester, coming in at a total of $337 total on average.

Regarding the most expensive radiator fan replacement costs, we have the 2015 Audi S7 and the 2008 Mitsubishi Lancer. The Mitsubishi averages $933, with parts costing a whopping $814. The Audi S7 is the most expensive, and has an average replacement cost of $1171 for the radiator fan. The labor of this car is high, costing $343 on average. You might have to also deal with other parts that need replacing or repairing when it comes to your radiator, like the coolant hoses and drain plug.

What If I Don’t Have The Money To Replace My Radiator Fan?

If you feel like your radiator fan replacement is too expensive for your current financial state, you might want to turn in your car to a junk dealer. A junk dealer can give you a fair quote, great customer service, and quick cash for your car.

First, remove all non-metal components from your vehicle. Then, bring your car to CashCarsBuyer, where excellent customer service and satisfaction is the goal. Earn some money to put towards a new and safe vehicle!