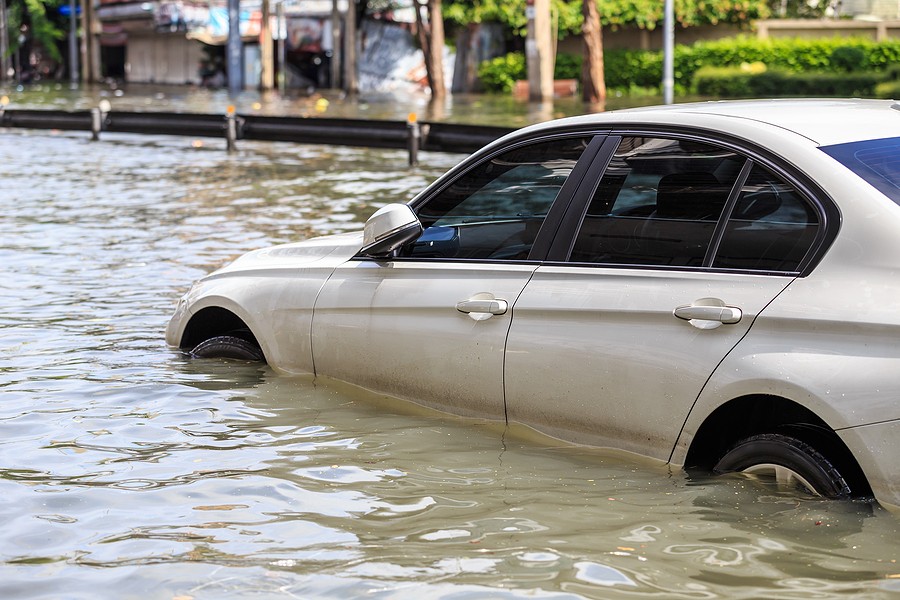 There’s nothing worse than a car that won’t start and for those of us that grew up in colder climates, the reality of a flooded engine is all too real. Since gasoline engines need a mixture of fuel (gas) and oxygen (air) in order to properly function, too much fuel and not enough air can lead to the condition we refer to as a flooded engine. This situation is much more common with older vehicles that employ a carburetor but can still happen on more modern, fuel-injected cars as well.

This article will cover all the elements of a flooded engine and help you figure out what to do if you think this is happening to your car or truck.

Let’s get down to basics!

The force of this explosion moves the piston down, which turns a crankshaft that converts linear motion into rotational motion. An increase of gasoline into the combustion chamber, along with an increase of air is what gives an engine increased power or acceleration. Once the explosion happens, the gases/heat expelled in the reaction is pushed through the exhaust valves and out the tailpipe. Most complex engines have this sequence repeating thousands of times a minute.

Once the sequence completes itself, the rotational mass is sent through the crankshaft and on to the transmission and differentials. Thus creating forward motion.

With this in mind, let’s re-approach the flooded engine and go over why it happens.

Why does it mean when engines become flooded?

A flooded engine happens when too much fuel enters into the combustion chamber, hence the term “flooding”. This condition is extremely common on carbureted vehicles since the air/fuel mixture is controlled by the accelerator pedal of the actual vehicle vs. a computer-controlled throttle. This can lead to operator error.

While starting a carbureted engine, it’s common practice to press the accelerator pedal to start the flow of fuel into a motor prior to turning the key. If the accelerator is held down for too long or the starting sequence does not commence, then the vehicle’s engine may flood with fuel. The tips of the spark plug become wet and are no longer able to ignite the air-fuel mixture.

A running engine is designed to suck in air but the fuel must be fed in by a driver to complete combustion, this is one of the issues with carbureted motors. This can happen on fuel-injected vehicles as well but typically only if it is very cold or very hot and the vehicle is moved a short distance – thus not allowing all fuel to burn off. Regardless of the engine, this is a frustrating problem that will leave you unable to drive your car or truck.

How Can I Tell I Have A Flooded Engine?

If your engine is flooding there are a few tell-tale signs that you may be dealing with a flooded motor.

It’s important to remember that the symptoms of a flooded engine are very simialr to other issues with your vehicles engine or electrical system. A blown starter, bad battery, clogged injectors or even a vacuum leak could call cause an engine ro struggle to start up. The real difference is the presence of black or sooty smoke coming from the tailpipe and the small of gasoline, which is unique to a flooded or soon to be flooded engine.

How Do You Fix A Flooded Engine?

Most mechanics recommend the one thing that a person with a broken engine rarely has to spare; time. If you suspect a flooded engine, it’s best to pop the hood and wait 20-30 mins for the excess fuel to evaporate before trying again. When you do try again, be sure to place your accelerator all the way to the floor prior to turning the key. This will allow the maximum amount of air into the engine to offset the unburnt fuel.

If this does not solve your problem, your next step is to clean your injectors to ensure that these symptoms are not caused by a faulty or clogged injector. Short of tearing apart your engine to access the injector, the best you can do is to run some industrial strength cleaner through a few tanks of fuel to unclog a sticky injector. Tackling the replacement of fuel injectors from home is a tough proposition at best.

A relatively easy repair for a flooded engine is the replacement of spark plugs. Since most engines are designed for relatively easy maintenance, most home mechanics can accomplish this relatively easily. Once you pop out a spark plug from your block, you’ll want to examine it for black soot or black build-up. It should not look black upon first glance and if it does, you should absolutely replace the plug.

Here’s a photo showing plugs that have been destroyed by too much petrol:

Luckily, most engines will not run into the issue of flooding since the usage of carburetors is no longer commonplace. Fuel-injected motors utilize sophisticated electronics to ensure the proper amount of fuel is delivered to the cylinder at the proper time. You’ll need to feed the engine some gas to start a car with a carburetor but the trick is to not pump the accelerator excessively prior to starting the vehicle. Doing so will unbalance the air/fuel mixture and cause the spark plugs to flood and not start. Be gentle when you start the vehicle, gradually give it fuel, and be sure to back off on the accelerator if the car doesn’t start right up.

You’ll also want to not start your car in cold temps, run it for a few seconds and then shut it back off. Since cold temperatures cause the gas vapor to quickly condense on the sides of the cold cylinder wall, it becomes less easy to ignite and thus is prone to flooding since liquid gasoline is much harder to ignite than vaporized fuel. Try to run your vehicle until it reaches optimal operating temps.

If you’ve got a car that’s still running an old school carburetor, you may want to think about getting rid of the old rig in favor of something more fuel efficient and easier to operate. Maybe your car that floods is a hobby project thats taken far too much of your time and money. Whatever the reason may be, theres no time like the present to consider getting some cold hard cash for your ride.

This is exactly where Cash Cars Buyer can be a huge help! Rather than worry about a flooding motor that can leave you stranded, give Cash Cars Buyer the opportunity to give you cash for your old ride. All you have to do is go to our website to start the process. We’ll give you a competitive quote on the spot and set up a time for our professional buyer to do a visual inspection of your car. Once your car is accepted, we’ll pay you cold hard cash on the spot. Yes, it really is that easy! Give Cash Car Buyers a shot today.