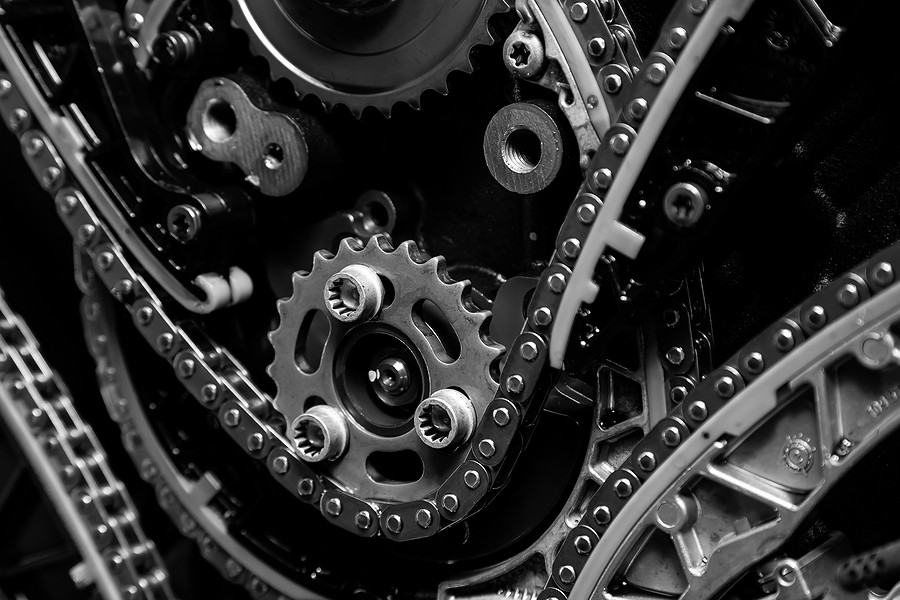 If you head to AutoZone right now you can find timing chains that cost you anywhere from $25 to $100 or more. There are also timing sets which include the gears you need that can cost anywhere from $15 to $250. And of course there are rubber timing belts which can be under $20.

Obviously what you need depends very heavily on the type of vehicle that you drive. You can get performance timing sets that are meant for racing cars. Timing chains are often only necessary in older vehicles, or some more heavy duty vehicles that require the extra strength of a steel chain.

Smaller vehicles tend to have timing chains that are easier to access, which means the labor cost associated with having these replaced is probably going to be less. In a large vehicle like an SUV it may be harder for your mechanic to get down into the engine and take off your old belts and put a new one on. That could increase your labor charge. The labor costs for a job like this could be anywhere from $200 to $400 or more.

As with any repair job, the make and model of your vehicle can greatly affect the outcome. Some cars are just more expensive to repair than others. Likewise, the cost for one mechanic to  another can vary greatly even within the same town.

If you don’t have a mechanic that you currently trust to give you good service at a good price, your best bet is to head to Google and do some research. It’s never a bad idea to ask friends and family, or look for reviews online to find out if a mechanic is reliable and trustworthy.

In the digital age we have an advantage that we didn’t have 20 or 30 years ago when it comes to finding mechanics. Nowadays you can look at reviews on Google and sites like Yelp to determine whether or not it’s worth your time and money to go see a particular mechanic. You should always trust your instincts, but it never hurts to look over the experiences that other people have had. If a local mechanic has 400 people saying they had a great experience with them, it’s probably a safe bet that you can rely on that mechanic.

What Is a Timing Chain?

The name timing chain comes from the fact that it synchronizes the movements between these two parts of your engine. Everything has to work in a precisely timed order. The pistons go up and down as the valves open and close in perfect synchronicity. That’s how your engine works, and if the timing chain slips or fails then the entire engine is thrown off that precision time.

Signs of a Bad Timing Chain

It’s worth remembering that the timing belts in your car is one of those parts that needs routine maintenance. Just like an oil filter, you can’t simply let this part go for the life of your car. Timing belts can only last for so long and should be replaced based on your manufacturer’s guidelines. You can check your owner’s manual to find out for sure when this is, but a good rule of thumb is that 75,000 to 100,000 miles is going to mean it’s time to replace the timing belt. This is one of the most important things to make sure you maintain under the hood. You never want to leave a timing  belt until it snaps

What if I Don’t Replace My Timing Chain?

Not replacing a timing belt or timing chain in your engine would be a big mistake. Preventive maintenance is well worth your effort in this case because the couple hundred dollars you pay to replace the timing belt before it breaks can save you a couple thousand dollars after it breaks.

When your timing chain snaps completely, if you were driving down the highway at that moment with your engine under a lot of stress, when your pistons hit the valves in your engine you were going to cause some serious damage inside the engine. If it’s bad enough, you might have to end up doing a complete motor repair on your vehicle. You’re looking at costs starting at a bare minimum of $2,000 to cover all the potential damage. This is definitely not the kind of thing that you want to happen.

It seems like on the surface that replacing the timing belt may not be that difficult task, but this is one that you might want to leave to the professionals. It was a deceptively difficult task to change a timing belt for someone who is not familiar with car repairs already. If you’ve never done this job before, and you’re not well-versed in how the timing belt works already, it may not be the best repair to start your journey on DIY repairs with.

The problem with doing a timing belt replacement on your own is that there are a few steps that are not typical to an everyday repair job. For instance, you’re going to need a tool called a puller to remove the camshaft pulley. If you don’t have that tool already it’s going to cost you a good chunk of change to get one. If you don’t know how to use one already, then you have to figure that out as well.

The parts are already going to set you back a couple hundred dollars, and if you need to buy some specialized tools you’re at the point where it may be more economical and safer to simply get a mechanic to do it. At least then you know the person doing the job has done this before and has the skill and know-how to get it done safely. There’s no harm in admitting that some jobs are just better left to professionals at the end of the day.

hat said, of course you could still try this on your own. Just know that you need to get the puller tool and it’s probably best to not just buy a timing belt, but the entire timing kit that includes the tensioners and the gears that you need as well. If you’re replacing the timing belt anyway, it’s a good thing to get brand new gears in there as well so that the whole system will have the same lifespan. You don’t want to have a new belt and then be relying on gears that may have already gone through 60,000 miles worth of travel that could be weakening and getting ready to fail on their own.

Another thing to consider is that a lot of times when the timing chain is being replaced, mechanics will take a look at your water pump and replace that at the same time since they’re down in that area. That adds another consideration if you want to pull this off on your own. You’ll need to get the parts for that as well, or know that if you leave it it  may need to be looked into as well further down the road.

If you’re already confident in your abilities to do some basic to intermediate car repairs, and you have access to the required tools, that it’s worth a shot. You can actually rent some of the tools you need from a number of places online including AutoZone if that’s the consideration you want to make.

Back in the day, mechanics were changing broken timing chains and timing belts much more frequently than they do today. The reason it doesn’t happen as often anymore is not that the belts and chains are being made of superior materials and lasting longer, is that drivers are more educated. People are aware now that these things need to be changed before they break because preventive maintenance will save you a lot of money in the long run.

You should always keep a schedule of repairs and when they need to be done on your vehicle. Just like you know when you need to have your oil changed and the filters checked out, you should put the timing belt on that list as well just to make sure your car is running as well as it can all the time.