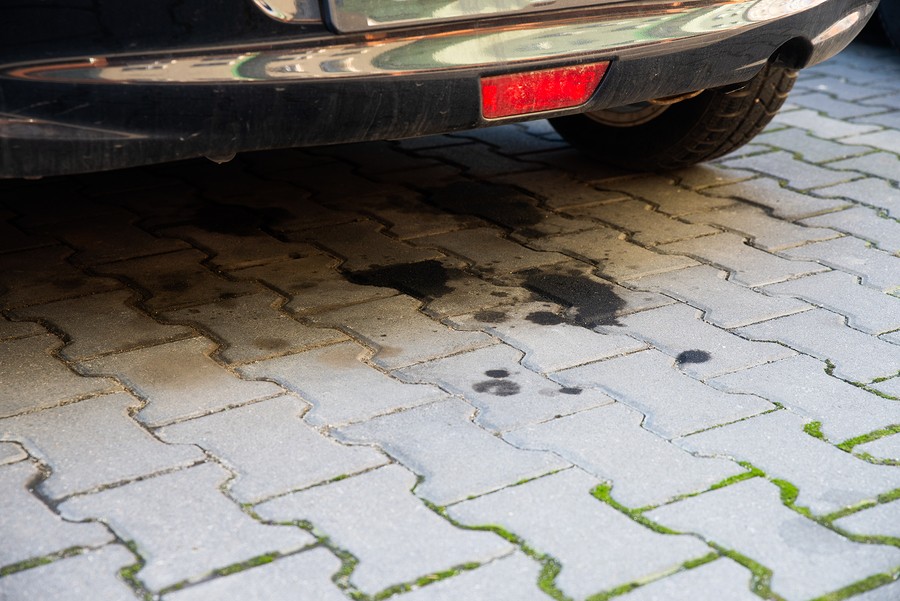 Have you noticed that there appears to be fluid leaking from the bottom of your car? That fluid could very well be power steering fluid, which is usually red, green, or clear. It could also be engine coolant, which is typically green, red, orange, or clear. Additionally, it could be an automatic transmission fluid, which is almost always red. But in many cases, the fluid leaking from your car will be engine oil, which is brown, black, or amber—and the oil leak repair cost associated with it could be anywhere from around $150 to over $1,000 depending on the specific problem that you have on your hands.

If you see engine oil pooling underneath your car almost every day, you should spring into action immediately and do something about it. It’s very important to fix this issue, regardless of the engine oil leak repair cost, since oil plays such a vital role in the overall well-being of your car. Continue reading to learn more about what could be causing an engine oil leak and to find out about some of the factors that can affect your car oil leak repair cost when you go to have an oil leak fixed.

What Is Engine Oil?

Engine oil, which is also commonly called motor oil, car oil, or engine lubricant, is a type of oil that’s used to lubricate all the parts inside an internal combustion engine. The oil in a car is responsible for reducing the friction that’s created by the moving parts in an engine. It’s also responsible for cleaning the engine and preventing sludge and varnish from building up inside it.

You should consult the owner’s manual for your car to see exactly how often you need to have the oil in your car changed. But generally speaking, most people will need to consider changing the oil in their car about once every three months or every 3,000 miles. They’ll also need to look out for oil leaks to ensure that they have enough oil in their cars at all times.

How Do I Know If I Have an Oil Leak?

As we alluded to earlier, there are some instances in which it’ll be very easy for you to tell that you have oil leaking from your car. You’ll know that you have an oil leak when you have dark puddles forming underneath your car every time you leave it parked for an extended period of time. Oil usually leaks slowly from a car, but it will begin to pool under it within just a couple of hours if you leave your car parked long enough.

There are times when these symptoms will indicate a problem that doesn’t have anything to do with your car’s oil. For example, you could be experiencing an issue with your engine coolant, not your oil, if your car is overheating. But if you have an oil leak, it won’t be long before you’re seeing several of these symptoms, if not all of these symptoms, at one time. It’ll indicate that you need to take your car in for the necessary repairs right away.

What Causes an Oil Leak?

If your car is, in fact, leaking engine oil, you’re probably going to start panicking right away and wondering what the engine oil leak repair cost is going to be. But the truth is that you shouldn’t worry about it too much until you’re able to take your car to a mechanic and have them diagnose what’s causing the oil leak to occur. There are a number of different things that can cause your car to leak oil.

Here are some of the things that might be allowing engine oil to leak out of your car at a rapid rate:

It’s impossible to give a definitive answer as far as how much an oil leak repair will cost since it’ll all depend on the specific problem with your car. Replacing an oil drain plug gasket is a cheap fix in most cases and won’t break the bank. But you’ll find that the front seal oil leak repair cost or the oil pan leak repair cost will be much higher and might force you to rethink whether or not it makes sense to have the repair done, especially if your car is on its last legs.

How Much Do Oil Leak Repairs Cost?

Let’s take a look at several of the most common oil leak repairs you might have to do and the price tags that often come along with them:

There are also times when a vehicle owner will continue to drive around with a car that’s leaking oil. In the event that this happens, they could need to make multiple oil leak repairs. They could also be forced to repair other components of their engines, which can send the price of an oil leak repair way up. You could be looking at an auto repair bill in the thousands if you don’t take action right away after spotting the signs of an oil leak.

Why Does an Oil Leak Repair Cost So Much?

As you just saw, there are several oil leak repairs that aren’t going to set you back much at all. If you have an oil leak caused by a problem with your oil drain plug gasket or an oil leak caused by an ill-fitting oil filter, you won’t have to be concerned about the oil leak repair cost. You can fix the issue you’re dealing with for less than the cost of an oil change in some cases since these repairs won’t involve much labor or any expensive parts.

There are, however, some oil leak repairs that will cost you a pretty penny. If you need to have a damaged oil pan or a damaged piston fixed, it’s going to take a mechanic some time to diagnose the problem and fix it. It’s also going to require a mechanic to obtain costly parts in some cases, which will send your engine oil leak repair cost skyrocketing.

Are There Ever Extra Costs Associated With an Oil Leak Repair?

One thing that we would like to make a note of at this point is that there are some additional costs that you might face when making an oil leak repair outside of the costs we just talked about. Following an oil leak repair, many mechanics will recommend that you have a complete oil change done, even if you just had one done recently. This is to ensure that your car has enough oil in it.

Is the Oil Leak Repair Cost Worth It?

If you take your car to a mechanic for an oil leak repair and they tell you that it’s going to cost $250, $500, or even up over $1,000 to fix your car, you might decide against making the necessary repairs to it. You might also wonder whether or not the oil leak repair cost is worth it, especially if you have an older car that’s not worth much, to begin with. And while there are some car repairs that you might be able to get around, fixing an oil leak is most definitely not one of them! There is no question that an oil leak repair is worth the cost if you plan to continue to drive your car around.

In a best-case scenario, you’re going to be forced to spend a small fortune on engine oil from now on if you don’t repair a leak. You’re going to have to constantly fill your car with oil on a regular basis to replace the oil that’s leaking out, if that’s the approach that you choose to take to deal with your problem. And in a worst-case scenario, all of the oil in your car is going to leak out and increase the chances of your car catching on fire at some point. When that happens, it’ll obviously ruin your car and make it pretty much worthless. But more importantly, it’ll also put the safety of you, your passengers, and other drivers at risk when you drive around in a car with an oil leak.

If you’re planning to hang onto your current car for a little longer, you should never ignore an oil leak, regardless of what the oil leak repair cost might be. Fixing an oil leak will keep your car running strong, stop other car problems from popping up, and prevent your car from becoming too dangerous to drive.

Should You Sell Your Car for Cash Instead of Repairing an Oil Leak?

Would you like to get around paying high oil leak repair costs without continuing to drive a dangerous car around? There is one other option that you will have when your car is leaking oil. Instead of subjecting yourself to a high car oil leak repair cost, you can sell your car as is and get cold, hard cash in exchange for it. This will help you avoid having to pay to get your car fixed while also keeping your car off the road. It might be the best option that you have.

If you would like to get an offer for your car rather than dealing with a high engine oil leak repair cost, Cash Cars Buyer can set you up with one. We’ll send you an offer for your car based on the make and model of it, the year it was made, and its current condition. We pay top dollar for cars, including those in need of oil leak repairs, and can help you steer clear of having to make expensive repairs to your vehicle. Touch base with us today to see how easy it can be to sell your car for cash.