10 Symptoms of a Failing Timing Belt: All You Need To Know 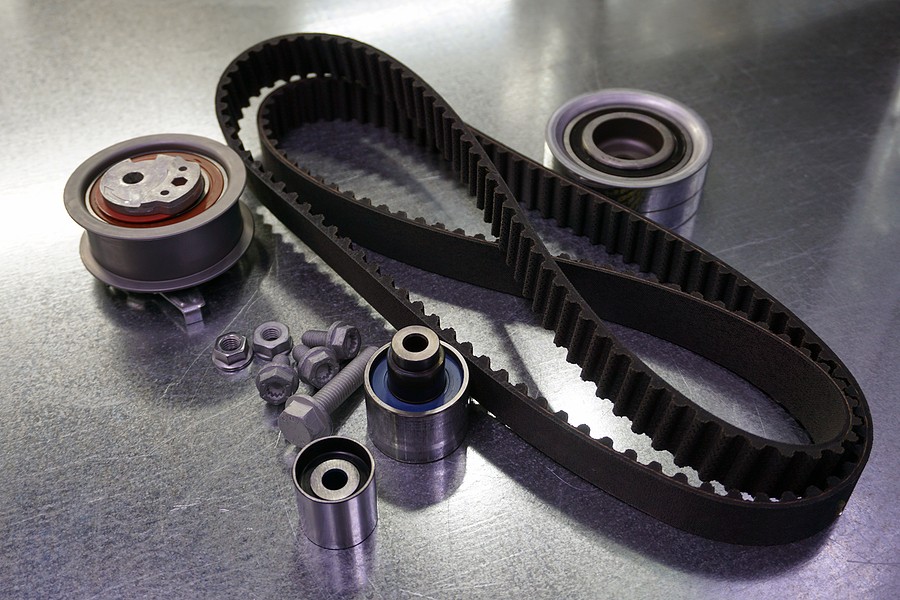 What is a timing belt, and what does it do?

A timing belt is a belt that keeps the camshaft and crankshaft spinning together. In a four-stroke, four-cylinder engine, this happens every two revolutions of the crankshaft. The timing belt also sends oil from an oil sump up to lubricate gears in the engine block, especially the camshaft.

The timing belt – which is just a rubber reinforced cog belt – is driven by the crankshaft. It pushes on a tensioner pulley and keeps engine valves in time with piston movement. If this belt fails, the pistons and valves will become misaligned, and your engine won't work.

What happens when your timing belt goes out?

If your timing belt goes out, it can happen in several ways. If the teeth on the camshaft or crankshaft slip, you won't be able to change gears. This is caused when the engine rotational speed becomes too slow to turn the valves off in time with the pistons. In effect, the valves will repeatedly be slamming into the pistons, and they'll never move again.

If the belt breaks, you won't be able to start your vehicle for a similar reason – there won't be an effective vacuum in the intake manifold, and no air will reach the cylinders. This can happen if someone starts the car when the belt has just broken. They'll turn the key, and nothing will happen because there's no engine compression.

The other possibility is that your belt becomes loose because of wear, stretching, or damage from a foreign object. If it becomes loose, you may notice a rattling noise underneath the hood as the valve train tries to work with an ill-fitting belt. If this happens, turn off your engine immediately as you run the risk of severe internal damage. The 10 symptoms of a failing timing belt :

When the timing belt fails, your vehicle will lose compression. When this happens, you may notice any of these ten symptoms:

The timing belt is connected to your engine's accessories, like the water pump and the oil pump. As it starts to wear out and fray, you will hear a loud noise coming from under the hood of your car that resembles a rattling sound. This means that soon if left untreated, the timing belt will snap.

If your timing belt is slipping, you will notice that it takes a lot of cranking before your vehicle starts. It may even feel like there is no compression. Once this happens, you should check with an expert to see if it's time for a new timing belt.

As the timing belt starts to fail, it won't be able to turn all of the parts in your engine. If this happens, not only will your vehicle be very hard to start, but you might even notice that other components like your battery and starter motor are working harder than they should.

If there isn't enough tension on the timing belt, it won't spin fast enough for optimal engine performance or fuel economy. As a result, you may notice a loss of power – especially during acceleration – as well as bad gas mileage. This, along with many other symptoms, indicates that it's time for a new timing belt.

5) Rough idle at a stoplight

One way to tell if your timing belt is about to go is the sound of your engine when you're stopped at a red light. If your engine sounds uneven or off-key, it may indicate that the tensioner pulley for the timing belt has failed and needs replacing. If there isn't enough oil circulating the cams and valves of your vehicle's engine, then they become dry and will heat up very quickly. This can lead to a breakdown in other components of your car like the coolant pump and radiator fan – which will cause them to fail as well, leading to more damage. In addition, overheating can cause other problems like melted pistons and blown head gaskets.

With a failing timing belt, the oil pump won't function properly. As a result, you may notice that your car is leaking oil from the front of the motor towards the back of the engine. This could mean there's a problem with either your valve cover gasket or crankshaft seal – both of which have to do with the timing belt system.

As mentioned before, if your timing belt fails, then it will begin to wear out various components in your engine, including bearings and camshafts. In addition, you might start hearing clicking noises coming from under the hood if this happens.

When a timing belt is going bad, your engine's valves will start to make a clicking or ticking sound. You may also notice a rattling noise coming from the front end of the engine block. This is caused by valves that are out of sync with one another and therefore opening at different times – which means they're wearing down faster than they should.

10) Timing marks not lining up on V-belts

If you open up the hood on your car and look at your timing belt, you should be able to see where it was the last set. In addition, some diagrams should be around it showing how it connects different components in your engine. If these start looking strange, it may be a sign that your timing belt is going bad. How to replace a timing belt?

If you confirm that your timing belt is going bad, then it's time to take action and replace it as soon as possible. If you want to do this on your own, you will need to follow this step-by-step process: Why it's important to replace your timing belt on time?

Timing belts are a key part of your vehicle's engine – and neglecting them can cause serious damage to important components like pistons, valves, and cams. For example, if the timing belt on your car is going bad, then there's a good chance that it's already starting to wear down other bits in your engine, which can result in overheating and oil leaks. Replacing a timing belt is not difficult – but it's essential for your engine's health that you do it when needed.

How long does a timing belt last?

On the other hand, interference engines have a timing belt lifespan of around 4-6 years or 50k–100k miles. If this belt breaks, you run the risk of your pistons hitting valves and causing serious internal engine damage – which can be very expensive to repair.

How much does it cost to replace a timing belt?

The cost of replacing a timing belt can vary greatly depending on the make and model of your car, but it's usually in the range of $100-$400. However, this does not include any repairs needed to fix problems caused by neglecting or ignoring the timing belt (when signs like these appear). Alternatives to the timing belt

Although timing belts are still the most common method of running an engine's timing, there are some other alternatives that you may want to consider.

The chain-driven system; is like a regular belt but with metal links instead of rubber or plastic cords. However, chains usually need to be replaced every 100k miles (around the same time as a rubber timing belt), which can cost up to $400 each time.

Some systems use gears instead of cogs, but these tend to be much less common and more expensive than belts and chains.

Do you need to replace your timing belt?

In general, yes – it's important to replace your timing belt on time. However, there are some situations where you can safely avoid changing it.

If your engine is an interference type, then the need to replace the belt becomes more urgent – but in that case, too neglecting it can cause serious damage. You should consider how much you drive your car, the model, the age of your engine, and whether you have had to replace other parts recently. Can I drive with a bad timing belt?

No, you should never try to drive with a bad timing belt because if it snaps, then serious engine damage can happen. This usually causes your vehicle's oil light to come on and your car to stop working – but before this happens, you may feel a loss of power and the engine becoming increasingly loud and hard to start up.

Is it worth fixing a timing belt?

In general, fixing a timing belt can be well worth it because it's a lot cheaper than replacing an engine.

However, there are several factors to consider before spending a penny replacing the timing belt:

Has your car been overheating?

If you notice that the water in your radiator has begun to boil, then it's likely that there is some damage – and this might be just around the time when your timing belt decides to go.

Is the engine of your car old or new?

Timing belts can last a lot longer if your engine is new – that's because the materials are of better quality, thus able to stand up to deterioration.

Do you have any other warning signs?

If you're noticing several issues simultaneously, then it's likely there are problems with your timing belt. These can include oil leakages, water leakage, Loss of Strange power whirring or whining noises, and other timing belt issues.

If your car is losing coolant or oil, the timing belt will likely have problems.

Is it legal to replace a timing belt yourself?

You're allowed to change a timing belt as long as you have the proper knowledge and training. You may want to consult your owner's manual or ask someone in the automotive industry for more information.

If you still think that having to replace a timing belt is like one of your worst nightmares, then make sure to keep this article somewhere on hand, so you know exactly what to look out for when it's time for a new one. Also, for some further advice on getting the most from your vehicle, you might want to check out these essential tips on keeping your car in great shape. If you've noticed 10 of the symptoms listed in this article, it may be time to get a new timing belt for your vehicle. Timing belts are an important component of newer vehicles because they provide power and ensure all other parts work together properly. However, if neglected or ignored, these belts can cause major damage that will require expensive repairs – so don't forget about them!

The cost and difficulty of replacing one depend on how old your car is and what kind you have (interference engines need more immediate attention). Still, either way, we recommend getting professional help if needed.

PrevPreviousRadiator Hose Failure – What It Means For Your Car’s Long Term Health?
Next10 Symptoms That Mean You Need New RotorsNext