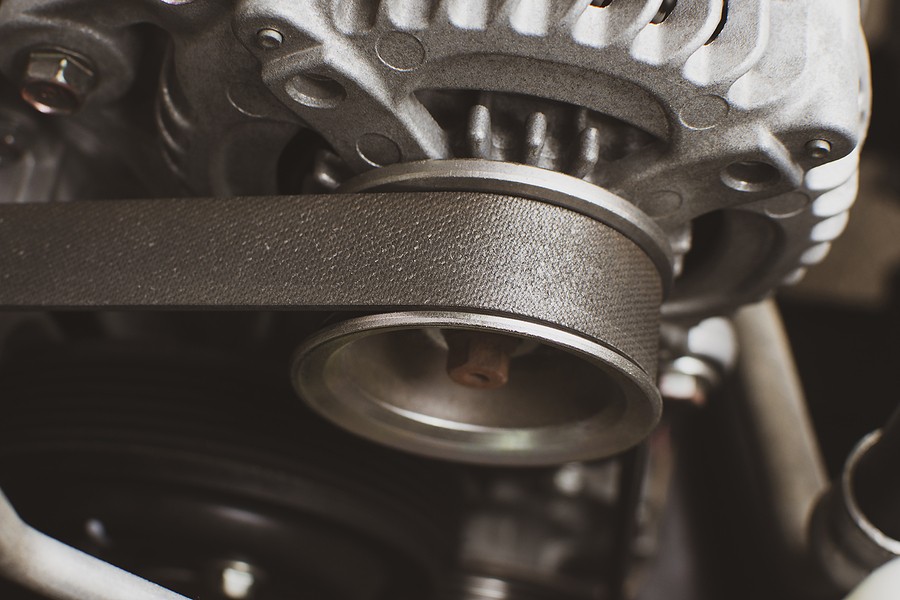 Your car is full of all kinds of pumps and gaskets and belts. You have probably heard of things like the serpentine belt before and your timing belt. And while the timing belt is a very important part of how a vehicle works, a large number of drivers on the road don't actually know where the timing belt is under the hood, or even what it does. If you have any interest in how your car works though, it's worth knowing a little bit about the timing belt, how you can tell if something's going wrong with it, and also how much it will cost you to get it fixed if something goes wrong.

What Is a Timing Belt?

Vehicles with a combustion engine operate with either a timing belt or a timing chain. They do the exact same job, but the difference is a timing belt is usually made from some kind of a composite material and they’re just colloquially referred to as a rubber belt, while the timing chain is made from metal.

The timing belt connects your crankshaft to your camshaft in the engine. As your engine operates, the timing belt synchronizes the movement between the two so that as the crankshaft allows the pistons to pump up and down in your engine the camshaft will open and close the valves in the cylinders in perfectly synchronized order. This is what allows the precision timing of your engine, including the injection of the fuel-air mixture to the combustion chamber which allows the combustion reaction to occur and powers your entire vehicle. If the timing of this is off in any way, you're going to get engine misfires, stalls, and potentially some serious engine damage as a result. If it's bad enough, your car won't work at all.

If your timing belt is off, then the pistons are at risk of striking the valves. That can end up damaging both valves and the pistons and potentially warping the cylinders as well or destroying the cylinder heads. The cost of this kind of damage to your engine can be pretty intense if it gets bad enough. Potentially in the realm of $3,000 to $4,000 or more depending on the make and model of your vehicle.

The belt itself is a drive belt, that means it has teeth on the inside that allow it to connect to the gears at the end of the camshaft and the crankshaft.

Like any part of your engine, over time your timing belt is subject to a lot of wear and tear and intense heat that's going to take its toll. The teeth can wear off the inside of the belt, the belt may slip from the gears, or it can break entirely. If any of these happen it could cause some potentially serious damage to your engine which you're going to want to avoid at all costs. That's why it's recommended that yours gets changed every 60,000 miles to 90,000 miles. This also very much depends on the make and model of your vehicle.  You can check your owner's manual to find out for sure when it's recommended that you get your timing belt changed. Whatever your manufacturer recommends, you really should consider changing it when they say even if it seems like yours is still in okay condition. The timing belt cannot last forever, and the cost of repairs if it goes bad are much worse than the cost of replacing it when it just starts to wear out.

There are some clear signs you could be on the lookout for to let you know that you have a problem with your timing belt and it's going to need to be changed soon.

The sounds your car makes are one of the best ways you can diagnose a problem with your vehicle. You should be aware of how your engine sounds when it's operating under normal conditions, so when you start to hear a sound that you don't expect coming from under the hood you need to pay attention to it. If it's a problem with your timing belt you're going to be hearing a sustained, repetitive ticking sound coming from under the hood. It sounds a bit like someone spinning a roulette wheel very quickly. This can be a result of problems with the teeth of the belt starting to wear thin or break off as the belt rotates between the camshaft and a crankshaft gears.

When the belt starts to wear out considerably the timing of the camshaft and the crankshaft will no longer be in sync the way they’re supposed to. That can mean that your fuel and air mixture is being injected into the chamber at the wrong time, and the combustion reaction will happen out of sync with the rest of the engine causing a misfire in that chamber.  If one of the cylinders opens at the wrong time because it's not in sync with the pistons any longer, then you're going to be losing a proportional amount of power based on how many cylinders your engine has. That means if you have a 4-cylinder engine, that misfire is dropping the overall power of your engine by 25% on that stroke. If you let this go on for too long, you're going to end up having a serious engine failure at some point.

This is a potential side effect if your timing belt is broken completely but you are not driving the car at the moment. Perhaps it snapped the moment you tried to turn your car on as the pressure hit the belt. That will ensure that the engine itself is actually unable to turn over, and you can't start your vehicle. You'll get the starter motor engaged, but the engine itself won't turn over. Although this is a bad situation to be in, this would be much preferable to the belt breaking while the vehicle is actually in motion because of the potential damage is going to be caused by the crankshaft continuing to turn even though it's no longer in sync with the camshaft.

You may end up having oil leaking from the front of your motor if it's a problem with your timing belt. This can be a result of the teeth of your timing belt breaking off and falling into the oil pan below. They can clog the oil pan and prevent oil from circulating properly throughout your vehicle. It can also end up resulting in your engine overheating and causing some serious damage. Oil can also leak from the timing belt cover itself if the gaskets between the engine block and the timing cover have worn out.

There are several different reasons that you could be experiencing some rough idling when you're just sitting in your vehicle, but a problem with your timing belt is definitely one of them. This is most likely to happen when teeth come loose, and they get stuck in the gears causing the car to jerk and vibrate even though you're just sitting still in the vehicle.

The Cost of Replacing a Timing Belt

The timing belt may look like a fairly simple part of your engine but unfortunately replacing it is not a simple job by any means. In fact, when you go to a mechanic to get your timing belt replaced it's probably going to cost you anywhere from $500 up to $2,000 depending on the make, model, and year of your vehicle. The reason for this is that getting to your tiny but it's not an easy task at all. It's one of the more complicated procedures that qualifies as routine maintenance for your vehicle and will take a lot of time to get done.

The big range and cost for replacing a timing belt can't really be narrowed down more than they are, based on a number of factors. As you've no doubt noticed the cost of repairs can vary greatly even between mechanics in the same town. From one side of the country to the other they're also going to be extremely different, so it's hard to get a precise figure for this kind of job. Also, replacing a timing belt in a more common vehicle is going to be cheaper than it would be if you roll up into your mechanic with a McLaren F1.

Technically speaking you can do any Auto Repair on your own if you are confident enough in your abilities and you have all the tools to do it. That said, replacing the timing belt in your car is definitely a more advanced level repair and definitely not my kind of thing you want to try to do on your own if you don't have very much experience working under the hood of your car.

If you've done a few repairs on your own already, and you're pretty confident you know what you're doing then you could always give it a try if you wanted to, but we definitely recommend following closely with some guys that you can find on the internet or at the very least checking out some videos made by mechanics who have YouTube channels that can walk you through the process step by step so you can actually see what you need to do and refer back to it in case you're unsure of a step along the way. These videos make doing home auto repairs a lot easier, since it's like having a mechanic on call to show you what you need to do.

In general, we would recommend against trying this job on your own just because the level of complexity involved with it. He wanted to take it on by yourself, just be aware that if something goes wrong it can cause some serious damage to your engine in the long run.

Even though it's not a particularly complicated part of your engine, it's also incredibly important to the overall functioning of the vehicle. You need to make sure you're keeping up with the maintenance of your timing belt to prevent some catastrophic engine failure down the road. What could cost you $500 to $700 to repair right now might end up costing you $3,000 to $4,000 if you let it go too long and damage your engine. If you notice any of the symptoms of a bad timing belt, make sure you get it repaired as soon as you can.