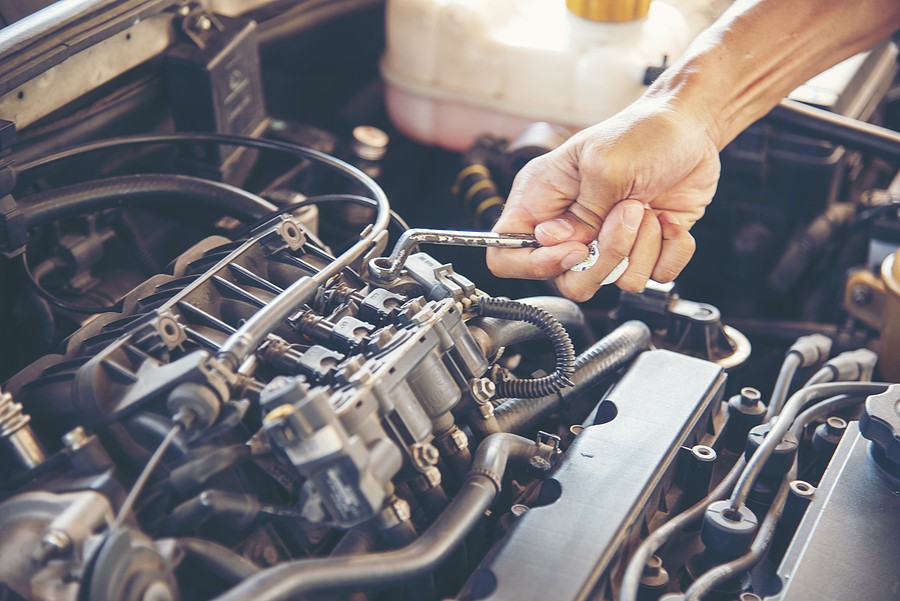 The crankshaft bearing is one of the wear components of a vehicle. It wears down over time. That is why it is important for drivers to follow the manufacturer’s recommended oil change intervals and belt replacements. You will know that it has become faulty when you experience symptoms of a bad crankshaft bearing that include knocking noises coming from the engine, metal shavings in the oil, low oil pressure, and crankshaft bearing noises.

Symptoms of a Bad Crankshaft Bearing: What happens when engine bearings fail?

The crankshaft bearing is the one that supports the crankshaft by providing its rotation under inertia forces produced by shaft components and swinging forces transferred by the connecting rod. It helps lessen the friction between the spinning crankshaft and the stationary engine block which is one of the reasons why crankshaft bearings become faulty over time. The task it has to do is the main reason the bearings sustain damage which could trigger the symptoms of a bad crankshaft bearing.

The crankshaft bearings are generally made to be durable but normal wear and tear can happen and it could happen faster if the recommended car maintenance and service schedule are not followed. If your crankshaft bearings fail, your vehicle will most likely have a catastrophic engine failure.

A bad crankshaft bearing can cause a catastrophic engine failure or an engine seizure because of the increase of heat, pressure, and metals rubbing against each other that could result in the crankshaft distortions as well as the connecting rods. When this happens, you will have to disassemble and reassemble the engine of your vehicle to correct the problem. If the problems become too expensive to fix, you might want to consider if you still want to repair your car or just sell it.

To avoid having severe engine problems that can become too costly to fix, you need to do all you can to follow the manufacturer’s recommended maintenance and service schedule. A small problem that started with a faulty crankshaft bearing can result in a serious engine or transmission failure. It is for this reason why drivers need to know the symptoms of a bad crankshaft bearing to detect the problem and have it corrected immediately.

Knocking noises coming from the engine is one of the common symptoms of a bad crankshaft bearing. Drivers usually refer to this as a rod knock which sounds like a consistent hammering that increases as the RPM does. This can occur when the crankshaft bearing has worn out that causes excess clearances. Rod knocks can happen when the rod big ends hit against the crankshaft at the top and the bottom of the piston stroke.

The valve trains and lifters can also produce noises that can be caused by a bad crankshaft bearing. This is because there is a priority main oiling system in many engines that makes the oil pressure go to the crankshaft and rods first before it goes through the other components. When the said crankshaft and the rods get excess oil leakage, it causes the valve train to starve of the much needed pressure which can result in a lifter tapping noise. The said noise can be an indication of a worn crank or bearings. If you hear any knocking noise, have your vehicle inspected right away to be sure.

A low or reduced oil pressure is an early symptom of a bad crankshaft bearing. You will usually notice it when you first start your car. Sometimes, a worn bearing can also set off the check engine light to illuminate intermittently depending on the severity of the problem.

Worn bearings can lead to having excess clearances between the bearings that can trigger an oil pressure leak. It usually occurs when your vehicle is at low RPM where the pump is spinning the slowest. Although low oil pressure can be caused by a lot of issues from other car components, it is also one of the symptoms of a bad crankshaft bearing.

If you check your oil using a dipstick and you notice metal, silvery shavings or aluminum dust in it, it is an indication that your bearings have worn out. You will know if what you found in the oil is caused by a worn bearing if the aluminum shavings look like dust or is powder-fine. If you see splinters or strings of aluminum stuck in the dipstick, it means that it is not caused by normal wear and tear but from overheating or running out of oil. This could mean that your bearings have already failed or are starting to fail.

A lot of crankshaft bearings have three layers that include an aluminum outer layer, a copper layer in the middle, and a steel backing plate. These kinds of bearings use copper that is known to be a softer but smoother metal compared to aluminum. This is done to give an extra protective layer before the bearing wears down to the steel or before it completely fails.

The copper layer of the bearing alone can usually last for around a thousand miles or two which can give the drivers an extra time to detect the impending bearing failure before it causes severe damages. It is important that you detect it before something bad happens. You can do so by checking your oil using the dipstick. If you see any copper sheen in the dipstick, in the oil, or inside the valve cover, it is an indication that the bearing has worn down to its copper layer and is about to fail.

This problem is caused by low oil pressure that can potentially damage the bearing surfaces and the crankshaft itself. The crankshaft bearing noise can be heard as a rumbling or thumping sound that seems to be coming somewhere deep in the engine when you are accelerating.

If you notice this sound while driving, it is important that you stop the engine and not start it until it has been checked by removing the oil pan and inspecting the crankshaft bearings. Doing this can help keep your vehicle’s crankshaft from being damaged. This is because the bearing shells are what the crankshaft rotates within and ignoring the noises and continuing to run the engine can lead to a major engine failure.

However, there are instances where the drivers have heard the noise, stopped the engine but it was too late and the engine needs to be removed to correct the problem. The process to fix the issue can cost thousands of dollars. If the problem has been detected on time, a mechanic will just fix the problem by removing and replacing the bearings and also by fixing the oil pressure problem.

This high spot can become large enough and will be able to make contact with the journal that can lead to a rubbing action. This causes the bearing lining to break down and become ruptured.

However, the softer the material of the bearing is, the greater the embeddability and it can sometimes become a good thing. If the embedded particle is small and becomes deeply fixed in the soft bearing material, chances are, it will not cause any damage to the crankshaft journal. But of course, if the abrasive particles are big and the bearing material is thin, it could cause damage to the bearings since it could displace the material and stick out above its surface that can hit and damage the crankshaft.

Another reason that can cause the car owners to encounter symptoms of a bad crankshaft bearing is heat. If the bearing gets hot enough, it could cause it to wear faster and can cause it to fail. The bearings are cooled down by the oil circulating between the bearing and the journal and if the oil flow has been interrupted or stopped, it can cause the bearing temperatures to spike up and the risk of scoring the bearing will also be increased.

It is always a good practice to check the oil level since a low oil level can cause damage to many of the engine’s moving parts. Problems that can cause this include a clogged oil pick up screen, worn oil pump, crankcase low oil level, internal oil leaks, oil level too high, or oil diluted with fuel from excessive blowbies.

If the bearings are misaligned, it can wear out faster. This can happen when the center main bearings have more wear than the ones towards the crankshaft ends and develop bents. You can visit a repair shop and have them check the straightness of the crankshaft. This can be done by placing the crank on V blocks with a dial indicator positioned on the center journal and watching the indicator closely as the crank is turning a one complete revolution. You will know if the crank needs to be straightened or replaced when the crankshaft runout exceeds the limit.

Another thing that can cause a bad crankshaft bearing is corrosion. It can happen when the acids build up in the crankcase. The acids can attack the bearings causing it to pit in the bearing surface. This problem usually happens in heavy-duty engines that use diesel that has high sulfur but gasoline engine vehicles can also experience this problem if the oil has not been changed for a while.

If the bearings are installed incorrectly or are misassembled, it can cause a premature failure. Mistakes such as installing a bearing with a wrong size, using the wrong half of a split bearing, getting too much or not enough crush because of the caps being too tight or loose, forgetting to tighten it, or forgetting to clean the parts thoroughly and the dirt is left behind the bearing shell when it is being installed can cause the bearings to fail or wear out faster.

If you notice any of the symptoms of a bad crankshaft bearing, it is important that you have it checked immediately since the problem can escalate quickly. Experts also advise that whenever you are rebuilding an engine, you should also replace the crankshaft bearings. This is because the crankshaft bearing is a wear component that can deteriorate when exposed to a lot of heat and pressure. It is also subjected to chemical attacks, abrasion, and loss of lubrication.