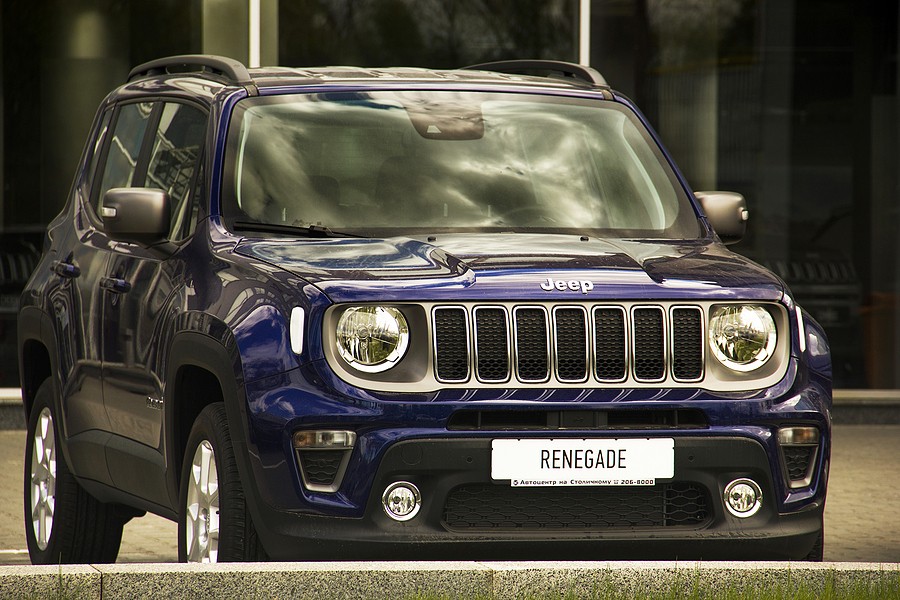 The Jeep Renegade is a subcompact crossover SUV produced by Jeep, a brand of American automobile and a division of FCA US LLC. This off-road car is made for on-road use or for use on a gravel surface, due to the deep open treads on tires, a flexible suspension, and caterpillar tracks. This vehicle was first shown to the public in March of 2014 at the Geneva Motor Show.

Standard Jeep Renegade models usually have a front wheel drive, with the car also offering four wheel drive systems and Active Drive Low. There are various trim levels of the Jeep Renegade, including the Sport, Latitude, Altitude, Limited, and Trailhawk.

The mid-level Latitude model includes the standard equipment in the Sport, along with alloy wheels, exterior colored side mirrors, power windows, air conditioning, and sunroof panels. The Altitude model is an upgrade of the Latitude, with the Sports equipment, along with gloss black interior and exterior trim, black cloth seats, and black stitching.

The Limited model is a top of the line option that is a luxurious Jeep Renegade, including a 2.4-liter engine, nine-speed automatic transmission, leather surfaces, silver front grille, chrome mirrors, and door handles. The Trailhawk is an off-road option that includes the Latitude’s equipment and an off-road suspension with skid plates.

The top 3 concerns focusing on the Jeep Renegade throughout all model years focus on the 9-speed automatic transmission not working in the 2015 Renegade being the third most prevalent issue, and occurring at around 11,000 miles. The second highest problem includes the squealing brakes in the 2015 Renegade, with the average mileage of this issue onset coming out to 3,000 miles. The top concern is the check engine light turning on in the 2015 Renegade, with the average cost to fix this issue coming to around $1,600 and happening at around 21,000 miles. As you can see, there are various Jeep Renegade problems that need to be addressed.

The top problems of the engine not being able to turn over and the electrical accessories not working properly need to be fixed to keep the car working smoothly. Users state that the engine will not turn over and it occurs at below 10,000 miles, with owners stating that the transmission light turns on during use, the engine cuts out during use, and the power is lost while driving.

The second highest complaint in the electrical category is that the electrical accessories do not work properly, and the problems occur below 10,000 miles, which is very low for severe issues to be happening in any car. The accessories not working correctly are minor, but important, Jeep Renegade problems.

Regarding the third problem category, users have cited numerous issues about the interior accessories. The top concerns focus on the door locks not working properly, the keys stuck in the ignition, the compass being inaccurate, the dash lights changing, the driver’s seat wearing out, the radio cutting out, the service light and warning lights coming on, the crackling noise coming from the speakers, interior lights staying on after use, the key being removed while in gear, strange noises, the steering wheel off center, and the throttle control light turning on.

The last category of the highest complaints deal with the braking system, with users stating that the brakes squeal, the brakes make noises, there is uneven rotor wear, the brakes lock up, and the hill start assist does not work. These brake concerns highlight the prevalent Jeep Renegade problems.

The top categories of concern for the following year have some of the same issues as the previous model, with the highest category of complaints focusing on the interior accessories, the engine, and the electrical system. The top concerns in the interior accessories focus on the premium audio sounding poor, the audio system not working correctly, the Bluetooth and Uconnect software not working properly, the check engine light turning on, the cruise control and GPS system not working well, and the radio and traction control light not working.

The second category that has the highest user issues focus on the engine, with users stating that the car stalls while driving, there is excessive oil consumption, the engine light and service light comes on, there is potential for engine fire, failed motor mounts, rough old,e and there is unintended acceleration.

For the final category of problems for the Jeep Renegade, users had issues with the electrical system. The top concerns deal with the engine not turning over, multiple electrical failures, computer system failing, the service passive entry light turned on, and multiple warning lights turned on. The average repair cost for the engine not turning over comes at around $220 and occurs at an average of around 16,550 miles.

Owners of the 2017 Jeep Renegade claimed the car dies and stalls while driving, there is excessive oil consumption, and there is an engine knocking and rattling noise. The average mileage to repair the engine dying comes at around 18,000 miles, and has users stating that the car shuts off while you are driving, the engine light turns on, and the car is a liability. The 2017 Jeep Renegade problems are difficult to deal with and require replacements and repairs.

The 2018 Jeep Renegade top categories of concern focus on the engine, with only minimal issues focusing on the electrical system and the transmission. The main electrical systems focus on excessive oil consumption, the car stalling while driving, and the car losing acceleration. The excessive oil consumption generally occurs at around 5,400 miles and has users stating that there is too much oil use and poor fuel economy. The top concerns of users show the prevalent and far-reaching Jeep Renegade problems.

The pros of the Jeep Renegade involve high performing off-road capabilities and user-friendly infotainment system that is easy to use. The cons of the Jeep Renegade in this year include poor equipment and lack of features, underpowered and inefficient base engine, and the transmission being more responsive. The 2019 model finished only in the middle of the pack in terms of hte SUV rankings due to the high quality off-road capabilities, but lowered by the base engine and the subpar fuel economy rankings.

New for the 2019 model include the turbo-four engine option to help the base power engine, the 2.4-liter engine becoming standard in this year, the manual transmission has been discontinued, and the adaptive cruise control and parallel parking sensors becoming available to help with safety parking. Despite these new additions, the Jeep Renegade problems remain.

The Car US News scorecard gave the Jeep Renegade a 7.1 out of 10 score, with the critics’ rating earning 8.0, the performance coming to 6.9, the interior 6.8, the total cost of ownership equalling 8.9, the safety coming out to 8.6, and the JD Power reliability coming out to just 2 out of 5 stars, which is very poor for any type of car.

The newest model of the Jep, the 2020 Jeep Renegade, earned fair rankings in various categories. This model year earned its highest ranking with a #$11 spot in th Subcompact SUVs category, but earned poor rankings in the SUVs with 2 Rows coming out to #35 and teh #51 spot in the Crossover SUVs category.

The Jeep Compass is a compact SUV that is similar to the Jeep Renegade in multiple aspects. Both of these models from the same manufacturer contain the same base engine, which is little to write home about, but both work well during off-roading. Despite being similar, there are a few key differences. The Jeep Renegade is more stable when turning corners, and is available with a turbocharged engine for those who want more performance capabilities.

The Jeep Compass has more passenger and cargo space for extra comfort and luggage storage, and it comes with more tech features, like Android Auto and Apple CarPlay. Depending on what you need will influence what car you would choose. Even though the Jeep Renegade problems can be slightly fixed with the engine upgrade, you might want a more spacious car.

The Subaru Crosstrek is not comparable to the Jeep Renegade when it comes to off-roading capabilities, and has a weaker base engine. If you really focus on driving off-road and want on-road and off-road capabilities in one car, then the Jeep Renegade should be your pick. However, the Subaru Crosstrek ranks higher in various subcompact SUV class categories.