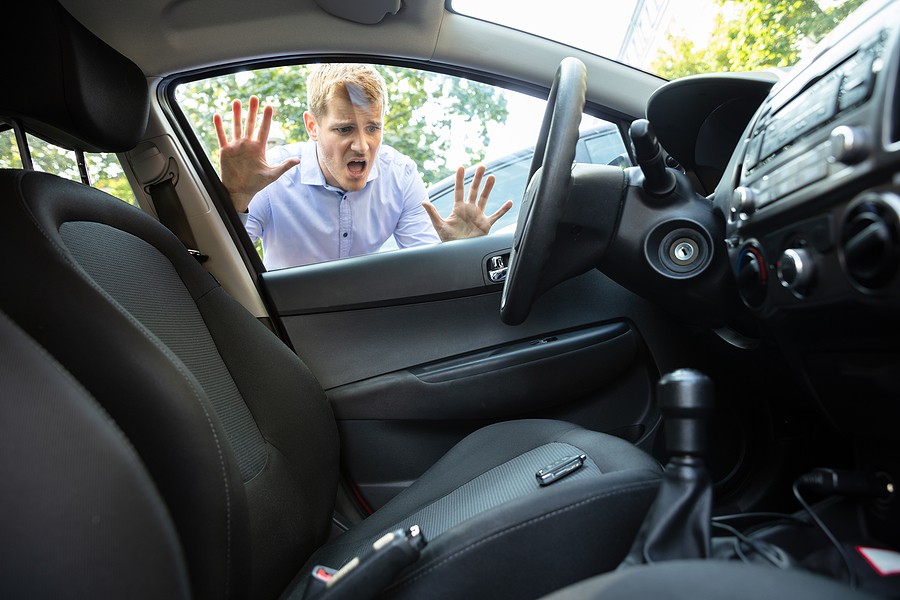 Nearly every modern car comes with a spare set of keys and one problem – you never take the spare set of keys with you if you have your regular key anyway. So if you happen to lock the door with your keys inside, and you’re not at home, you don’t have the spare key that can help you get in. We all feel a little foolish when this happens, but it happens more often than most of us would like to admit. Nearly every driver has experienced this once in their life and had to deal with the problem of what to do when the keys are locked in the car. It’s embarrassing to ask for help but there is a bright side here which is there are many potential methods to access your car even if you’re missing the key. Some are a little easier than others, some need you to have a few tools on hand to get done, but they all can potentially work for you. Let’s take a look at what you could do if you locked your keys in the car.

You may have seen this in a movie before, but it does work for real if you have the right kind of car. Modern cars with electronic door locks will probably not respond very well to this method to jimmy a lock. However, if you have an older car that has the little knob that looks kind of like a golf tee on the inside of your door that you lift up to unlock and push down to lock, then a coat hanger maybe the magic wand you’re looking for.

For this to work what you need to do is straighten out the coat hanger as best you can and then form one of the ends into a small hook. You have to force the hook  down between the rubber molding that holds your window in the window frame itself and the window glass. Now you’re going fishing.

Carefully lower the hook into the door along the window until you can hook it around the door lock button itself. Get the hook underneath it and pull up to unlock the door. It really is that simple, and that’s why old school cars were subject to being stolen with this method. It doesn’t take a lot of work if you know what you’re doing.

Method 2: The Rod and Wedge

There’s another method to unlocking your door that may work with a coat hanger as well even if you have electronic locks, depending on how they work. You can use this method for the old school pull up and push down lock buttons, as well as electronic locks that are like tiny switches or levers that you can push up or down. This may even work with a push button door lock system as well depending on how steady your hand is and how accurate your aim is.

For this to work you need to have the coat hanger again or a long, thin, sturdy rod. You’ll also need a wooden wedge like a doorstop. This method doesn’t sound like it should work but you’d be surprised at how well it does.

Take the door stop and insert it at the very top of the door you’re trying to unlock against the door frame. Just get that wedge inserted in the crack around your door at the top right corner. Using the butt of your hand as a hammer, start tapping the wedge in. Because your door is locked down by the handle, the top right corner of the door is the farthest part from where it’s actually secured in place. That means that you can gently get a wedge in there and the metal will have enough give to it that you can slowly create a gap between the door and the frame without causing much damage at all. You don’t need a huge gap opened up here, you just need enough space to insert your metal rod or that coat hanger. You don’t want to use too many tools that will damage your door but a gentle tap on a wooden wedge won’t scratch or dent the metal and should give you enough room.

Once you open a small gap at the top of your door you again need a steady hand to go fishing. You’ll have to reach in with your coat hanger or metal rod to your locking mechanism and push the button or pull the button depending on what’s going to open the door for you.

There are also air wedges you can buy that pump up to wedge into the door and frame to open your door the same as the wooden wedge. They seem to work well but the potential problem is that, if you have one of these, it’s probably in the trunk of your car where you can’t get it.

Method 3: The Screwdriver and Rod

This is the same method as the wedge that we just detailed only you would use a Phillips head screwdriver instead of a wooden wedge. The reason we mention this is you’re probably much more likely to have access to a Phillips head screwdriver than you are to a wedge of wood at any given moment. The wedge method is better though because it’s going to cause less damage. A screwdriver has a very high likelihood of scratching your paint or causing dents in the metal. However, if it’s an emergency and you have no other option, you can do the exact same thing with the screwdriver instead of the wooden wedge.

Method 4: Call in a Favor

Not everyone thinks of this when they lock themselves out of the car but if you do have a spare key somewhere then that’s your best bet for getting back into the car. If there’s any chance that you can call someone who can get the key and bring it to you, you may want to give that a try before doing any of these other more extreme methods.

If you’re reading this on your phone right now because you actually have locked yourself out of your car, then you may not have access to a wooden wedge or a coat hanger at the moment, but you probably do have the number of somebody you can trust who can help you out on the off chance that they have access to wherever you put your spare key back at home. It’s definitely worth a shot.

This is a near legendary method of unlocking a door when you don’t have a key. Legendary because it’s a rumour that has been going around for a long time, but you’ll be hard-pressed to find anyone who can confirm that they’ve actually done this. If you want, you could try this on your own just for fun to see if it works. A lot of people have tried and failed miserably, but others do claim that it can get the job done.

For this to allegedly work you need a tennis ball with a hole in it. You’ll have to drill a small hole into the tennis ball or use a screwdriver or something else. You don’t want a giant hole, just one that is small enough to fit over the keyhole in your car door.

Once you have your tennis ball with a hole in it lined up with the keyhole in your car door, then push against the back of the tennis ball as hard as you can. Essentially what you’re doing here is turning the tennis ball into a tiny air pump. The theory here is that the pressure of the air being blown out of the tennis ball into the keyhole will create enough force to unlock the car door. If you’re skeptical, you have good reason to be because many people have tried this and failed. Even the MythBusters covered this in an episode of the show and debunked it completely saying that it does not work. For that reason, you may not want to rely on tennis balls alone even if other internet videos say it’s possible to get the job done.

Most modern electronic locks and key fobs are designed in a way that makes it all but impossible to lock them in the car. If you have a newer model car, this hopefully won’t be an issue but sometimes electronics fail, and things happen. One thing you need to remember is that electronic keys are coded to the vehicles that they go to. This is done by the manufacturer so if you know your key code number a locksmith can make an identical key for you. Just to be safe, and especially if you’ve done this once already and want to avoid it again, get your key code number and write it down along with your VIN number.

It’s possible that if you happen to get locked out near a dealership that sells your model of vehicle, they can help you get in. They won’t take your word for it, you’re going to need to prove that you own the car, but they may have keys that are able to unlock the door. They’re unlikely to have keys that will allow you to drive the car and leave with it, but they could get you in to get your keys as long as you have proof of ownership. If nothing else, it could be worth a shot.

Always make sure you have your ID with you when you’re doing this, especially away from your home. If you are in the mall parking lot, if you’re parked on the street somewhere, whatever it is if someone sees you trying to get into your car using these methods their first instinct is probably going to be that you are a car thief. If someone calls the police on you, you want to make sure you have your ID with you and proof that the car you’re trying to get into is actually yours just to avoid any potential problems. Also, if someone does call the police and you haven’t gotten into your car yet, it’s possible they may even be able to help you get into it, so there is an upside to that. Again, only if you can prove that the car is yours, however. If you can’t, then you may be in trouble.

When all else fails you’ll probably need to call roadside assistance, something like AAA, or a local locksmith. If AAA can’t help, they may be able to call a locksmith for you if you’re not from the area and don’t know who to get in touch with.

No one ever wants to lock the keys in the car, not just for the inconvenience of it all but because of how embarrassing it is. But it does happen all the time. Locksmiths probably wouldn’t have nearly the amount of business they get if people weren’t constantly locking themselves out of places.

It’s hard to be adequately prepared for this because why would you have a coat hanger on you but not your own car key? So, no matter what, this is probably going to be a stressful situation. Just remember that it happens to a lot of people, and eventually you will find a way to get back into your car. Unless it’s an absolute emergency that you get into the vehicle, don’t try anything that will damage your car if you can avoid it.