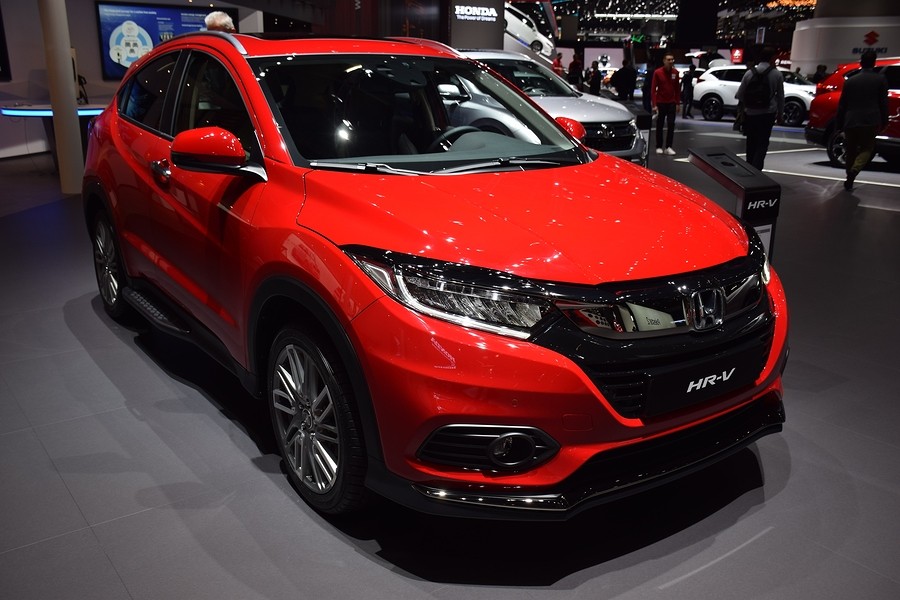 The Honda HR-V is a front-engine, 4-passenger, crossover SUV that is either front or all-wheel drive. Made and manufactured by Honda, this model has been on the market for since 1998. The first generation of Honda HR-V was marketed from 1999-2006 all over the world, and featured three or five doors. The second generation appeared in 2014, and is the one that exists today.

Honda HR-V Through The Years

The Honda HR-V has developed and evolved throughout the years since its inception in 1999. The Honda HR-V debuted during the J-Mover Series in the 1997 Tokyo Motor Show and the 1998 Geneva Motor Show. The HR-V shared its logo with the traditional Honda logo, and was created and manufactured in Suzuka, Japan. The all-wheel drive mechanism was first available in a 3-door body in February, and then Honda introduced the front-wheel drive, three-door option in September of 1999. During this time, Honda offered a specific 123bhp VTEC engine for both models.

The HR-V was created and designed to minimize pedestrian injuries in the event of trauma or a collision. The equipment within the Honda was characterized by ABS brakes with electronic brakeforce distribution, to vary the amount of force of braking evenly. In addition, the HR-V had dual supplemental restraint system airbags, power steering, power windows, folding rear seats, air conditioning, front fog lights, and a rear spoiler with an LED light. The 4WD system used dual hydraulic and was known for low nitrous oxide emissions.

The second generation of Honda HR-V  debuted at the 2014 New York International Auto Show and was unveiled later the same year. The model was introduced in the United States during the next year for a 2016 model. It shared the same platform as the Honda Fit, and was a little bit smaller than the CR-V and the Pilot.

The Honda HR-V has multiple reports of problems in each model throughout the years, specifically from 2015-2018. You must note the problems and the prevalence of those problems in each year in order to determine if any of the following is safe to drive. The focus on other aspects of the car has made Honda ignore and forget to address and update the engine problems, limiting the brand’s reliability.

The 2015 Honda HR-V has problems that are distributed between the body/paint category, steering issues, suspension faults, and windows/windshield problems. This 2015 model has actually a fairy low rate of any problems when compared to the upcoming years. The reports of faults are all low and minimal, when compared to serious and expensive fixes.

The worst Honda HR-V problems begin with a loud suspension noise, where a loud noise comes from the front of the car. There was a report of a defect with the suspension on a brand new car, which requires a fix. The other issue is that the Honda HR-V was unpainted upon delivery to a client. Third, the Honda HR-V has some noises attributed to the steering wheel which aren’t supposed to occur.

Some of Honda HR-V’s typical problems also occur within the 2015 model. First, the Honda HR-V underwent a huge amount of recalls in just a short period of time. The 2015 and 2016 models both had recalls during their time. The reasons for the recalls are as follows.

The Honda HR-V has electrical problems within various models of the car. One common complaint is that the wiring harness can attract rats, which will then chew and damage the wiring. This can cost over $1,000 to fix and occur multiple times on the same car.

Drivers have also reported that it is difficult to start the car and the electronic brake system is faulty. Many of these same drivers have reported that new batteries in the car can die without any cause, and require a battery repair or replacement to fix. The issue with these problems is that Honda might not cover these issues depending on the problem and cause.

Another issue that this model of HR-V can undergo is engine problems. Many of the HR-V models succumb to engine problems due to the construction. The Honda HR-V has numerous engine probems like their vehicles stalling, slowing down while driving, undergoing rough vibrations, burning excess oil, and the engine hesitating.

Unfortunately for those who have engine problems, the engine problems are extremely expensive to fix, and require replacing the engine entirely. Replacing an engine can cost thousands of dollars, and might have to be done on an almost brand-new 2005 Honda HR-V. If you have a Honda CR-V with a transmission issue or an engine issue, you can find a trusted buyer to give you the most money for your vehicle.

The seats are an extremely important part of every vehicle – despite not being the most expensive or the most crucial to a car running properly, the seats must be comfortable and ergonomic in order to serve their function properly. There are many reports of the seats causing some health issues due to the way they are designed. There have been users who reported lower back issues and headaches from the design of the Honda HR-V seats.

The second main issue is body and paint problems. There are reports of the paint being defective, and coming off of the car in huge pieces. This leaves your car looking old and used, when in reality, you may have just bought a new vehicle. In addition, there are structural and body problems within the car’s construction that are hazardous to driving. There are reports of the rear hatch door gaining water inside of it, and the taillights having condensation in them during use.

The third main issue deals with electrical problems in the Honda HR-V. There are reports of the warning lights coming on unexpectedly, the dash gauge malfunctioning, and the doors malfunctioning. There are further reports of the car intermittently not being able to start, the key icon remaining illuminated, and the keyless ignition button failing to start the car.

The Honda HR-V has a much lower amount of issues and user complaints than the previous year, with interior access, engine, and electrical problems being the most concerning. The interior access problems involve a broken cup holder, seta deterioration, and uncomfortable seats. Although the broken cup holder and deterioration aren’t too big of a deal, the uncomfortable seats are a common problem for this model – although they did remedy the problem mostly.

The issue with the electrical system is that power to the car can shut off suddenly, and the battery light and engine light both came on at once. The keyless door entry may also fail to recognize commands from the key fob, limiting the functionality. This could potentially lock the driver out of their vehicle. In addition, there are reports of the car shutting off while driving and needing to be restarted.

The last issue, with the Honda HR-V engine, has to do mainly with the vehicle speed control and unintended acceleration. The engine problems in this model has caused four crashes, and needs to be fixed in order to have ample control of the vehicle. There are reports of the HR-V accelerating as the driver is slowing down to park the car, make a turn, or come to a stop.

Although the number and severity of problems has been decreasing in the Honda HR-V models, there are still some electrical issues, braking problems, and engine problems plaguing all Honda HR-V years. The electrical problems include wires being destroyed by rodents due to the construction and material, and not being able to start. The electrical problems are furthered by the stereo turning on and off, failures with the power steering, and the warning indicator flashing.

The braking problems in the Honda HR-V include issues with the stability control and the engine stalling during use.There are reports of the brakes failing while driving down the road, and the driver needing to press the brake all the way to the ground in order to even slow down the vehicle. This is an extremely dangerous situation which must be fixed in order to use the car.

Throughout the years, specifically from 2015 to 2018, the main issues within the car were uncomfortable seats, defective paint, and the window gaskets leaking. The uncomfortable seats are the most prevalent in the 2016 Honda HR-V. The defective paint is also within the same model of the Honda HR-V. Lastly, the window gaskets leaking is most prevalent in the 2017 HR-V model.

The 2015 Honda HR-V had the least amount of issues when compared to the other years. The 2016 HR-V in the year that followed had the most – and the most severe. The engine problems and seat issues not only cause health issues and poor posture, but potentially fatal injuries due to not being able to brake or accelerate properly. The 2016 is the worst model due to several factors like repair cost and average mileage at the onset of the problems.

The 2017 Honda HR-V was a better model in terms of lower reports of problems, but was still second-highest in terms of the issues and repairs needed. The 2018 Honda HR-V finally saw even more of a dip in the unsatisfactory ratings and safety issues, but still was not as low as the 2015 model.

What If I Have A 2016 Honda HR-V That Is Unsafe And Requires An Expensive Fix?

If you own a 2016 Honda HR-V, you are extremely susceptible to engine problems and seat issues. These are two huge parts of the vehicle, and will play a huge part in the comfort and safety of everyone involved. The Honda HR-V from 2016 is the worst in terms of average mileage when the problems occur and the overall repair cost.

If you don’t want to pay for an expensive repair or replacement, and you don’t want to risk driving in an unsafe car, you could turn your 2016 Honda HR-V into a reputale company in order to earn some money to put towards your next car. Remove all the non-metal components from your vehicle – and sell them for some cash – and then bring your Honda to CashCarsBuyer for a trustworthy quote and some easy money.