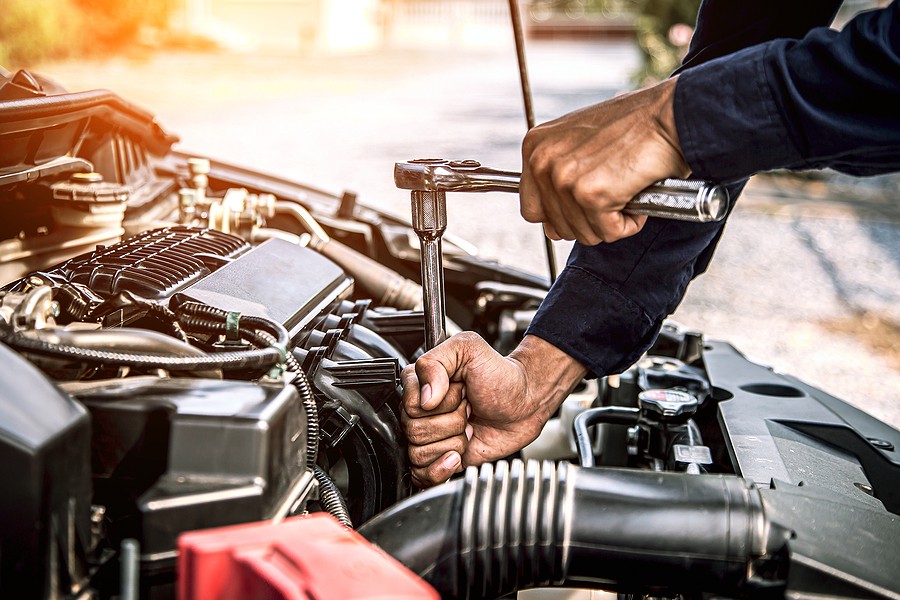 A knocking sound under the hood is never a good thing. The smooth rumble from your engine is replaced with a pinging sound or repetitive tapping that only becomes louder and faster when accelerating. This engine knock could be due to a variety of reasons and it can only be fixed by figuring out the source of the engine knock. You can try to remedy engine knocking on your own without the help of a mechanic by upgrading the fuel in your car or placing additives into your vehicle that are designed to get rid of carbon buildups. If that’s not enough engine knocking fix then it’s time to take your vehicle to the mechanic for a tune-up so you can have new spark plugs and spark plug wires.

Pinging, often known as knocking, is an audible sign of early combustion in one or more cylinders. If you ignore it, it will become a huge problem with costly implications. To deliver optimum power, efficiency, and wear, a well-tuned engine relies on precise timing. The revolving crankshaft alternates between driving the piston up into the cylinder and being pulled back by the piston's power as it descends.

What is the cause of engine knocking?

To understand the engine knocking fix better, let’s go back to the basics. When fuel burns unevenly in your engine's cylinders, knocking happens. When cylinders contain the right proportion of air and fuel, fuel will burn in distinct, regulated pockets rather than all at once.

After each pocket has burned, it produces a little shock, which ignites the next pocket and repeats the cycle. When fuel burns unevenly and shocks fire at inconvenient moments, engine banging occurs. What's the end result? An obnoxious noise and the risk of damage to the cylinder walls and pistons of your engine.

Different octane ratings exist in gasoline, which is why you have so many alternatives when you pull up to the pump. The more compression a fuel can sustain before igniting, the higher its octane rating. Using normal fuel in an engine that was designed to handle high-octane fuel could result in excessive engine noise.

High-octane gasoline is more expensive than ordinary gasoline. While saving a few dollars at the pump may appear to be a compelling argument to go with normal, engine knocking indicates that it's time to pay a bit more. Long-term usage of the incorrect fuel might harm your engine and reduce your fuel efficiency.

Engine knocking fix for this case starts by checking your owner's manual to see what octane grade is appropriate for your vehicle. If needed, increase your octane level at your next fill up, or apply an octane booster to boost performance. If a few fill-ups don't seem to help, your issue could be caused by something else.

The computer controls the timing of the engine in most modern cars, that is, when the spark plugs will fire at what point in the engine's trip. However, if the spark doesn't fire exactly when it should, numerous detonations in the cylinder can occur, resulting in engine knock.

Problems with the oxygen sensors, fuel injectors, fuel pump, or mass airflow sensor can result in a lean air/fuel mixture in the engine. A lean air/fuel mixture contains insufficient fuel and enough air. Engine knock occurs when there isn't enough gasoline in each cylinder, causing the mixture to burn too slowly, resulting in repeated detonations.

Because the air/fuel ratio, fuel injectors, and timing in modern cars are all computer regulated, this form of engine knock isn't a common problem. There's even a knock sensor that detects engine knocks and alerts the Engine Control Unit, allowing it to instantly rectify the problem.

As a result, a faulty knock sensor might cause the engine to knock. Checking the knock sensor is an important component of the diagnostic process if you're driving around in a modern car with engine knock.

Rod knock is another sort of engine knock. The crankshaft is turned by the pistons as they go up and down in the engine, sending power to the wheels. Rod bearings provide for smooth piston movement, but they can wear out or become misaligned over time. The pistons will begin to rattle against the crankshaft as the bearings wear down, producing a knocking sound.

Engine Knocking fix for this problem may require new bearings or other work on the pistons or crankshaft, which are located deep within the engine and can be a time-consuming repair.

To assist prevent carbon deposits from blocking your cylinders, every fuel sold in the United States must include carbon cleaning agents. Regrettably, certain deposits continue to form. There is less area for the fuel and air to combine when this happens, resulting in more compression. As you learned with fuel, changes in fuel compression can generate severe knocking sounds.

To correctly manage the flow of air, fuel, and exhaust, moving parts near the top of the cylinder head must move freely. Carbon build-up on valve stems decreases airflow and, in the worst-case scenario, prevents the valve from closing, resulting in compression loss.

Excess carbon buildup can wreak havoc on your engine's cylinders and cause difficulties with the combustion process. As a result of the reduced performance, lower gas mileage or overheating may follow. Engine knocking fix for this situation involves having your cylinders cleaned by a professional. Just to be cautious, check your cylinder for carbon build-up every 100 hours of use.

A spark plug that matches the engineering tolerances of your vehicle's engine is required. If you use the improper spark plug, the spark will be too hot, resulting in a knock.

Another potential source of engine banging isn't the engine at all. It's possible that it's coming from the auxiliary belt. A belt attached to numerous pulleys inside the engine room rotates when the engine runs. To turn smoothly and quietly, this belt must be under the precise amount of strain.

Rattling, clicking, and slapping noises can be misinterpreted for engine knock if the belt is stretched out, the tensioner isn't working properly, or one of the pulleys is bent out of shape. Fortunately, replacing the belt, adjusting the tension, or replacing a defective tensioner or auxiliary pulley can all solve a noisy accessory belt.

Can you drive a car with a knocking engine?

Yes, but only for a short distance! A knocking engine is a costly noise, and the sooner you do the engine knocking fix, the less it will cost you. If an engine is allowed to operate without oil or with insufficient oil pressure, it will fail catastrophically. Lack of engine coolant, which will also cause the light to illuminate, is likewise dangerous.

Does low oil cause engine knocking?

The more time your car is driven with low oil pressure, the more serious the potential harm gets. One of the most prevalent indications of a shortage of oil is knocking sounds from your engine. The under lubricated camshafts and valve train may be the source of these noises initially. Knocking sounds can also be produced by piston wrist pins and rod bearings.

Because of the lack of oil pressure, your crankshaft bearings will experience greater friction. Eventually, the bearings will fail completely, resulting in a deep thumping or pounding sound. Unfortunately, simply correcting your oil pressure problem will not solve the problem at this stage. Furthermore, your engine may require extensive repairs.

Car owners should be aware that not all banging sounds indicate a problem with the oil pressure. The noises could be caused by an unbalanced crankshaft in some circumstances. Similar noises can also be caused by cracks in the flywheel flex plate. Contact a skilled mechanic as soon as possible to establish the exact source of your car's pounding.

Can an oil change fix knocking?

Is it possible to make an engine operate quieter by using motor oil or engine oil additives? The answer is that it depends on what is causing the engine to knock. The first possibility, metal on metal contact, is the most evident. If engine noise is a result of this, it's most likely because you're short on oil and not enough oil is getting through to properly lubricate all of the parts.

When your engine's oil volume or pressure is low, you'll hear a “clattering noise” coming from the valves. This can be caused by a lack of oil as well as the oil becoming too old and beginning to break down or froth. In either case, there isn't enough lubricant reaching certain sections, resulting in a noisy engine. Is there a simple solution? To restore the oil volume to its proper level, change the oil or add more oil.

Keep in mind that if the oil level is excessively low, it was caused by a mechanical fault, such as an oil leak, consuming the oil over time. Adding extra oil will silence the engine, but it will not address the fundamental cause of the noise – an oil leak.

Engine noises can also be caused by defective hydraulic lifters. Depending on the particular reason of the lifter problem, these generate a tapping sound that can occur while the car is cold or heated. This means that a hydraulic lifter can fail due to wear, filth, or even a clogged check valve.

When you have a bad lifter, you will hear a ticking noise. This ticking occurs at a rapid rate, and it may even sound like tapping. Whatever caused the lifter to fail in the first place, it will have lost internal oil pressure. The lifter makes a ticking sound because it self-adjusts.

Is it possible to remedy this problem with motor oil or an oil additive? Sometimes. It is debatable. If the oil hasn't been changed in a while and the lifter is malfunctioning, a simple oil change may be all that's needed to fix the problem and quiet the engine.

When the oil isn't changed frequently enough, it becomes unclean, causing the lifter's internals to become dirty as well, resulting in the oil pressure reduction we stated previously. This can also occur if the wrong amount of oil is utilized.

While you have some flexibility in choosing the weight of oil (lighter oils can improve gas mileage), if the oil is too light or heavy, it can seep out of the lifter when the engine is turned off. Either that, or when the engine is started, it won't be pumped fast enough into the lifter, causing the engine to be noisy.

Engine knocking fix doesn’t always have to be complicated. You just have to know the source and type of the engine knocking noise and more often than not it’s a simple fix. In summary here are the things that you should do to resume to smooth sounding engine:

The first step in attempting to resolve an engine knock is to switch to higher-octane gasoline. Higher-octane fuels may withstand higher pressures before igniting. Change it out for one containing carbon-cleaning chemicals. This can help avoid further accumulation on the timing components in your vehicle's engine.

A bottle of carbon-cleaning agent can help scour the system and speed up the repair. Your engine's tune-up should include replacing the spark plugs and wires. Keep an eye out for low oil levels and change your vehicle's oil on a regular basis. Poorly lubricated timing-related elements towards the top of the engine might be caused by worn oil and low oil levels.