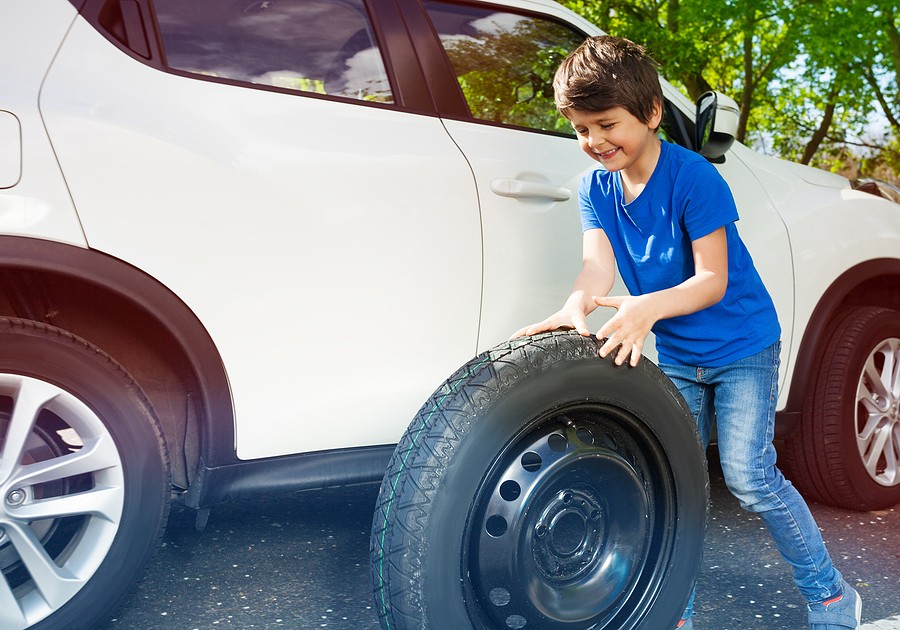 If you spend enough time behind the wheel of a car, you’re eventually going to have to deal with a flat tire. It doesn’t matter how careful you are with your car or what steps you take to care for your car’s tires. It’s only going to be a matter of time before a flat tire rears its ugly head and wreaks havoc on your car. When that time comes, you’re likely going to need to put a donut tire onto your car and drive around with it for at least a little while. Before you’re put into a position where you need to do this, you should find out more about what a donut tire is and learn about its limitations. Discover everything you need to know about donut tires below.

What Is a Donut Tire?

As we just mentioned a moment ago, almost everyone is going to get a flat tire at some point in time. As a result, most auto manufacturers go through the trouble of putting donut tires into the trunks of the vehicles that they sell. You should pop the trunk on your car, truck, or SUV and check out the donut tire that is in it. You may have to lift up the floor in your trunk to reveal it.

A donut tire is essentially a spare tire that is designed to be used for short periods of time. In the event that you get a flat tire, you can jack your car up, take your flat tire off of it, and replace it with your donut tire. You’ll notice that your donut tire is usually going to be a lot smaller than your regular tire. But it’ll help you drive your car to your local tire shop so that you can either have your flat tire patched up or replace your flat tire with a new one. You should only use your donut tire for a limited amount of time (more on this in a few minutes!), but it’ll prevent you from getting stranded on the side of the road.

What Is a Donut Tire Made Out Of?

One of the first things that you’re going to realize about your donut tire when you pull it out of your trunk is that it’s not made out of the same materials found in most other tires. While regular tires are constructed out of rubber, donut tires are typically made out of a hard material that looks and feels almost like plastic. They also have rims on them that are made out of a lightweight metal as opposed to the heavy-duty metal that you’ll find in most regular tires.

What Is the Difference Between a Donut Tire and a Spare Tire?

There are a lot of people who use the terms “donut tire” and “spare tire” interchangeably. It’s hard to blame them for doing this since donut tires are, in a lot of ways, just like spare tires. They come to the rescue when you get a flat tire and help you avoid sitting on the side on the road waiting for a tow for hours on end. But we should point out that donut tires and spare tires are not one and the same. They’re actually very different.

A true spare tire is actually just like a fifth tire for your car. It’s typically made by the same manufacturer that made the other four tires on your car. It’s also the same size as the other tires on your car and will, for all intents and purposes, perform the same as your other tires. You can often drive around on a spare tire for a lot longer than you can drive around on a donut tire.

A donut tire, on the other hand, doesn’t look anything like the other tires on your car. Outside of the fact that it’s made out of different materials, it’s also much smaller than your other tires, including true spare tires. Additionally, it’s not supposed to be used for any great length of time. It’s a temporary solution to a problem. It’s why you should not treat a donut tire like a true spare tire under any circumstances. You don’t want to confuse one with the other.

How Long Can You Drive On a Donut Tire?

As we’ve alluded to a couple of times now, you’re not going to be able to drive around on a donut tire for very long if you ever have to use one. While a donut tire can be a godsend for those who get a flat tire, you shouldn’t ever leave one on your car for any longer than you absolutely have it. Generally speaking, most experts will advise that you only use a donut tire for 50 to 70 miles at the most. That should provide you with enough mileage to get your car to a tire shop so that you can get your flat tire fixed.

How Fast Can You Drive With a Donut Tire?

Rather than driving at a normal rate of speed when you have a donut tire on your car, you should try to go as slow as you possibly can. If you have no other choice, you might be able to push your car to 50 miles per hour with a donut tire on your car. But if you go any faster than that, you’re going to be pressing your luck. Ideally, you should try to go just 15 to 20 miles per hour on a donut tire so that you can make it to a nearby tire shop. Throw your hazard lights on when you’re using a donut tire to let others know why you’re going so slow and let people pass you if you can so that you don’t hold up traffic.

Is It Safe to Drive With a Donut Tire?

When you have a donut tire on your car, you might be a little bit nervous about getting behind the wheel. Some people have heard horror stories about what can happen when people push donut tires too hard. But you should know that you can drive safely with a donut tire on your car as long as you listen to all of the advice that we just provided for you.

More often than not, those who experience problems with donut tires do so because they try to drive too far on them or because they try to drive too fast with them. This could very well make it unsafe for you to drive with a donut tire. But if you slow down when you have a donut tire on your car and avoid driving for too long with a donut tire, you shouldn’t run into any major issues. You should be able to make your way down to a tire shop so that you can get your flat tire fixed up in no time at all.

Can You Put Any Size Donut Tire on Your Vehicle?

If you happen to have a car that’s on the older side, the donut tire that it came with might be missing at this point. Because of this, you might be tempted to try and use any old donut tire the next time that you get a flat. And while you might get lucky and use a donut tire that’s the right size for your car, it’s important for you to remember that you should not get into the habit of putting any size donut tire on your vehicle.

Donut tires come in different sizes just like other tires. So if you put the wrong size donut tire onto your car, it could present a whole host of problems. You’re going to want to replace a missing donut tire with one that’s going to fit on your car when you need it most. This will prevent you from having to try and drive around on a donut tire that wasn’t designed to go on your vehicle.

How Can You Replace a Donut Tire?

Don’t have a donut tire in your trunk right now? You should, as we just suggested, replace it sooner rather than later. It’s easy enough for you to do this in this day and age. Most tire shops sell donut tires right alongside all of the other tires that they sell. You can pick one up and put it in your trunk so that you have it if you ever need it.

Just be sure that you let a tire shop know what kind of car that you drive when you’re in the process of buying one. They’ll be able to look up what size your donut tire will need to be. They might also be able to tell you what it would cost you to update to a true spare tire. This might be an option that you want to take advantage of if the price difference between a donut tire and a spare tire isn’t too much.

How Much Does a Donut Tire Cost?

The good news for those in the market for a donut tire is that they’re not going to break the bank. Although the total cost of one will vary depending on everything from what size you need to which brand you trust, you should be able to get your hands on a new donut tire for less than $100. And at most, you’ll only need to pay somewhere between $100 and $200 for one.

Is the Donut Tire Cost Worth It?

At the end of the day, driving around without a donut tire in your car is a big no-no. You’re going to kick yourself if you ever get a flat tire and discover that you don’t have a donut tire handy. It’s why you should take the time to make sure you have one in your trunk and to replace it if you don’t. You’ll be so happy that you have a donut tire the next time you go to use it.