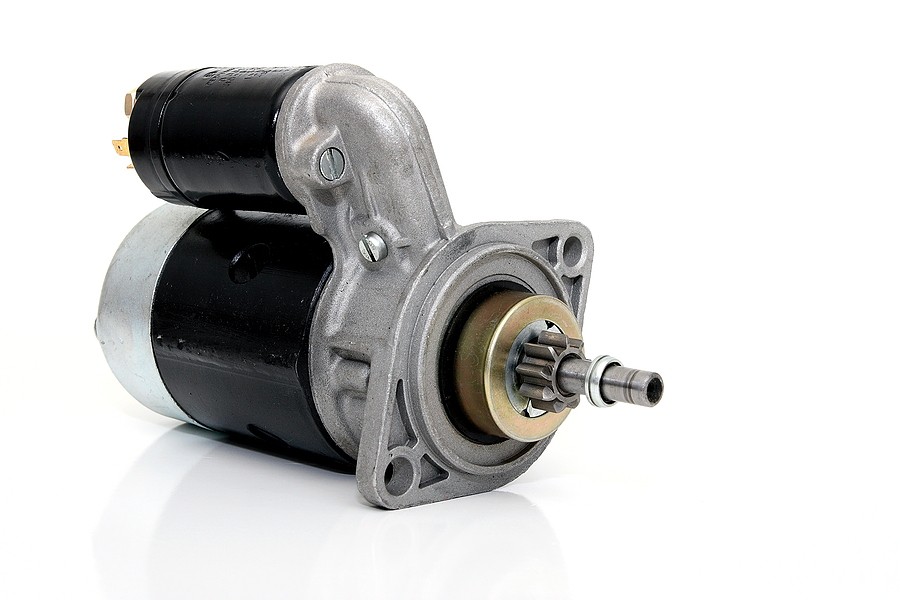 Every single time that you stick your car key into your ignition and turn it, you rely on your starter to help you get your car up and running. If your car starter ever goes bad on you, you’re going to need to replace it right away since a bad car starter will prevent you from being able to start your car. You’ll also need to be prepared to pay the price to have a new car starter put in. So, what will a new car starter cost you? Let’s break down what a car starter is and then get into talking about what a new one is going to set you back below.

What Is a Car Starter?

Before we dive headfirst into discussing the new car starter cost, it’s important for you to know what your car starter actually is. It’s difficult to wrap your head around just how essential a car starter is if you don’t know what it’s responsible for in the grand scheme of things. So we’re going to kick things off here with a quick breakdown of what a car starter is.

The starter that is in your car is actually an electric motor that will begin to spin your engine when you put your car key into your ignition and turn it. It’s the part of your car that is in charge of getting your engine going so that you can warm your car up and then take it out on the road. As you might expect, this makes your car starter a vital part of your car. It’s going to be impossible for you to start your engine if you don’t have a fully-functioning starter in your vehicle.

How Does a This Part Work?

We just provided you with a relatively simple explanation as far as how your car starter works within the context of your car. But it’s probably worth breaking it down a little bit further since your starter has a slightly more complicated job than you might realize. There are a number of things that your car starter is going to do in between the time that you turn your car key in your ignition and hear your engine start up. Here is how the process plays out when you go to start your car:

You don’t need to rely on your car starter for very long for you to get your engine going. But without your starter, your engine won’t stand a chance! It’s a big part of the reason why you need to know what the new car starter cost will be. You’re going to need to replace your starter sooner rather than later once it starts causing you problems.

How Long Should a Car Starter Last?

There are some ways that you can prevent your starter from giving out on you any sooner than it should. For example, you can limit the number of times that you start and stop your car when you’re behind the wheel whenever possible. But overall, you’re likely going to have to live with the fact that your car starter isn’t going to stick around forever. All car starters are going to die; it’s just a matter of when they give out.

What Are the Signs of a Bad One?

If the car starter in your vehicle has gone bad, it’s not going to be too difficult for you to tell. This is one of the simplest car problems for most people to identify since they’re going to realize something is wrong with their car as soon as they go to start it. Their cars aren’t going to start up like usual when their car starter has croaked on them.

If you ever experience something like this, it’s usually safe to say that your car starter has called it quits on you. You’re not going to have any other option but to pay the new car starter cost to have your starter replaced. You should, however, have a mechanic take a look at it just to make sure that there isn’t something else going on with your car. A dead car battery or a bad alternator could also be to blame for any problems related to trying to start your car.

Can You Drive With a Bad Car Starter?

There are some car issues that you’ll be able to continue to drive around with for a little while before you get them fixed. A bad car starter is not usually one of them. If you have an automatic transmission in your car, you aren’t going to be able to start your engine up if your car starter has gone bad on you. You’ll have to calculate the new car starter cost and pay for starter replacement before you’re able to do anything else.

You might be able to get your car to start when it has a bad starter in it if you have a manual transmission. It can be tricky trying to do it, but if you’re able to push your car while pressing down on the clutch and get it up to about 10 miles per hour, you may be able to get it to start. You’re obviously not going to be able to do this every single time you want to start your car, though, so you’re also going to be forced to replace your car starter as soon as you can if you plan on continuing to drive it.

What Should You Do If Your Starter Goes Bad?

If you find yourself in a position where you can’t get your car to start, driving it down to your local auto repair shop is not going to be an option. You’ll instead have to either hire a mobile mechanic to come out to fix your car or pay to have your car towed to a local shop. You might also be able to rely on your roadside assistance service to either come and fix your car or tow it for you.

Regardless of which approach you choose to take, the key is going to be tossing your car key to an ASE-certified mechanic. They’ll be able to confirm that you do, in fact, have a bad starter in your car. They’ll also be able to inform you of what the car starter cost will be for your specific make and model vehicle. And if you make the decision to replace your starter, they’ll then be able to remove your old starter from your car to make room for your new one. It’s a relatively simple and straightforward job that shouldn’t take them too much time at all.

Is Replacing a Bad Car Starter Yourself an Option?

Are you interested in trying to replace a bad car starter yourself as opposed to paying someone else to do it? If you feel comfortable enough doing it, this is a decent way to lower the car starter cost. You might only have to pay a fraction of what you would have to pay otherwise to put a new starter into place.

You do, however, need to be sure that you know how to replace a car starter prior to getting started. While it’s an easy enough job for most mechanics, it might throw you for a loop if you’ve never done it before. Here is a step-by-step breakdown on how to remove an old starter and put a new one in:

As long as you follow each and every one of these steps, your new car starter should work like a charm. If it doesn’t, you should go back over the steps to see which one you may have missed and then try testing it out again.

How Much Will a New Car Starter Cost?

If you opt to replace your old car starter on your own, you might be able to get away with paying just a few hundred dollars for it. Most starters are going to run you somewhere between $300 and $400 for parts alone. But if you have a mechanic put your new starter into place for you, you’re going to have to pay a little more than that. The labor associated with the new car starter cost is going to be anywhere from $125 to $150. As a result, you’ll generally end up paying between $425 and $550 to have someone else install a new starter for you.

Is the Price of A Car Starter  Worth It?

The only time when you may want to shy away from paying the new car starter cost is when you know that you’re not going to keep your car for much longer. It’s not going to make much sense to dump $500 into an older car that you’re going to get rid of soon. You might want to use your bad starter as motivation to sell your car when this is the case.

Can You Sell a Vehicle With a Bad Car Starter?

If you don’t want to pay the new car starter cost to have a new starter installed in your car, you should think about trying to sell it. You might not have a whole lot of luck selling it to a private seller who is looking for a car that works. But you could very well get away with selling it to a company like Cash Cars Buyer.

Despite the fact that you have a bad starter in your car, we’ll still pay you top dollar for it. We might even pay you way more than you would expect to get for it in its current condition depending on the make and model of it. Contact us today to find out what your old car might be worth to us, bad starter and all.