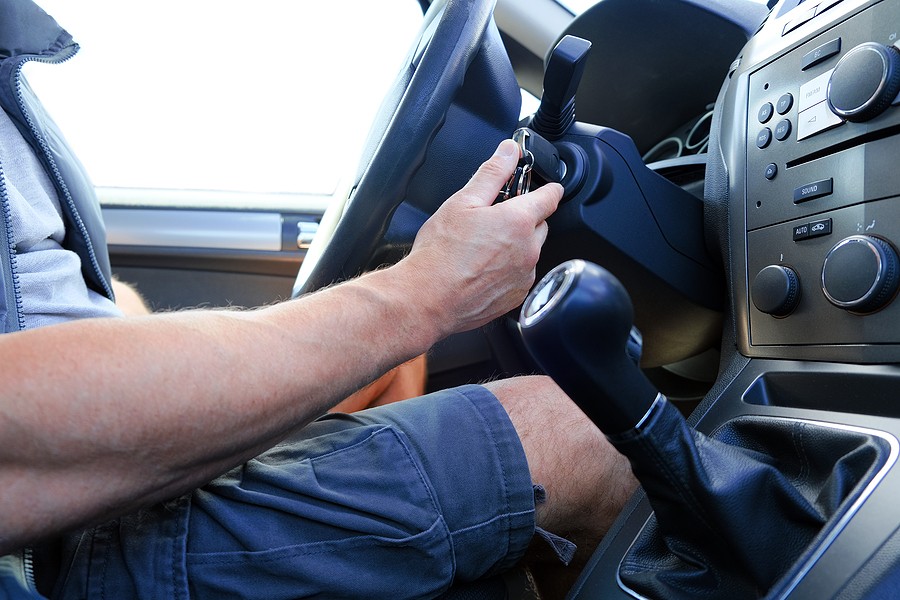 Your car’s starter is an important mechanism that is in charge of starting your vehicle – just as the name would imply. This electric motor cranks your engine to give power to your car physically. The starting system comprises the motor and the attached solenoids. If anyone of these parts go bad, you will experience the faulty starter symptoms that can plague your car’s performance levels and safety.

Let’s go over the most common faulty starter signs. By recognizing these symptoms before they get any worse and have the potential to harm your car even further, you can easily and quickly diagnose the issue and solve the problem. Solving the problem early on can help you remedy the cause, discover the most common symptoms to look out for, and find out what is the root of the faulty starter.

First, something might sound off in your vehicle. One of the main signs of a bad starter is a distinctive clicking noise when you turn the key or push the start button in your car. Unfortunately, a starter can also die without any sound at all, or it may announce its death with some whirring and grinding, which can show the faulty starter symptoms.

Another sign that there is a bad starter is that you have lights on in your car, but there is no action. If you try to start the engine and only find that the dashboard lights turn on, the engine might not power up, showing that you have a faulty starter.

Additionally,  a sign of a bad starter is that your engine will crank. If your engine is not revving even after a jump start, then it is a sign that your engine needs fixing, and the alternator needs replacement to prevent a faulty starter.

Furthermore, a sign of a bad alternator is that smoke can come out from your car. This state is a key part of your electrical system and is especially subject to blown fuses and short circuits, and can make the car easy to overheat and cause further electrical issues, causing the car to be hard to start and smoke to emit for the exhaust pipe.

The last sign of a bad starter that can make the car hard to start is that oil has soaked the starter. Your starter can usually be found on the motor’s driver's side, just below the cylinders, and might find that your starter is drenched in oil, causing your car to have a faulty starter.

Other Reasons Your Car Is Hard To Start

Besides realizing you might have a faulty starter in your vehicle, there are other reasons why your car is hard to start. When you start to drive your car and realize that it will not turn on, this is a big problem that needs to be solved immediately. If you can’t turn the ignition key in your car, you can’t move forward or backward, leaving you stuck in the same spot.

If this happens, most drivers will blame a few parts they believe to be the culprit – like a faulty starter, dead battery, or broken engine. But what if this is not the case? What if your car has not been sitting idle for a few hours, and the dead battery just can’t possibly be the cause? If you realize that there might be something else going in your car beside a faulty starter, you need to consider the alternatives of why your car is hard to start.

Another anti-theft mechanism that your car can have to protect you and your valuables is that it might feature an anti-theft immobilizer. This anti-theft system is in charge of detecting a chip in your key and allowing it to start and the key to turn on the ignition. If a key is inserted in the ignition of your car without this chip, the key will not turn.

If this system is not working correctly and has become damaged over time, the ignition might not detect the key and will prevent you from starting the car by turning it in the ignition. Instead of blaming a faulty starter for your car being difficult to turn on, in this case, the anti-theft immobilizer is your culprit.

If the mass airflow sensor or the oxygen sensor is not working properly and functioning correctly, the throttle body is clogged with too much carbon. In addition, your engine’s e air filter might become clogged and full of debris. If this is the case, a faulty alternator is not your problem – you might not be getting enough air into the engine.

This can make it difficult to turn the key or get the engine running, but once you start driving and the car is moving, the car’s forward momentum can allow your car to move normally.

Inside the engine cylinders in your car, a spark is necessarily fired to ignite the air and fuel mixture, creating the resulting explosions to move your car. However, if your spark plugs are damaged or if they are old and worn out after prolonged damage, meaning they have been fouled with carbon build-up or engine oil, a spark might not fire consistently, causing the faulty starter to not be the root issue of your car being hard to start.

Fuel in your car can become thick from your engine having a too low of a temperature or your mechanic or you not doing a recommended oil change. If the liquid is too thick, it will become very condensed and hard to move. As you know, a liquid can’t flow quickly if it is condensed.

In the case that the liquid has become condensed, the engine has to push around a lot and work harder to spin. This also requires the engine to need more energy in order to start since not enough fuel and oil can get into the fuel line and be directed to the engine to power the car.

Once you have determined that you have a faulty starter from the aforementioned symptoms, you need to determine whether or not you need to replace the starter yourself or by a mechanic. Replacing this part generally ranges between $172 and $955 on the high end of the spectrum. If you want to do this, fix yourself and believe you have the tools and knowledge, it will range between $117 and $794.

If you bring your faulty starter to a mechanic to carry out the replacement, the cost will range between $219 and $915. However, if you want to bring your car to a chain store where you feel more comfortable with their work standard, you can bring your car to either Midas or Mr. Tire.

At Midas, they will charge you between $248 and $955 for the faulty starter replacement, while at Mr. Tire it will be a little bit more expensive on the low end, coming in between $289 and $840.

If you decide you can do this on your own and you just need the parts, Walmart ranges between $99 and $218, while Amazon can sell you the parts for just $78 on the low end and $359 on the high end of the spectrum.

The main faulty starter signs that you will find in your car have to deal with both audible and visual signs, such as strange noises and the lights on, but nothing else works. As you can see, waiting to replace your faulty starter has a high price tag – if you fix the issue before it gets any worse by noticing the symptoms as mentioned earlier of a faulty starter, you can prevent further issues in your vehicle.