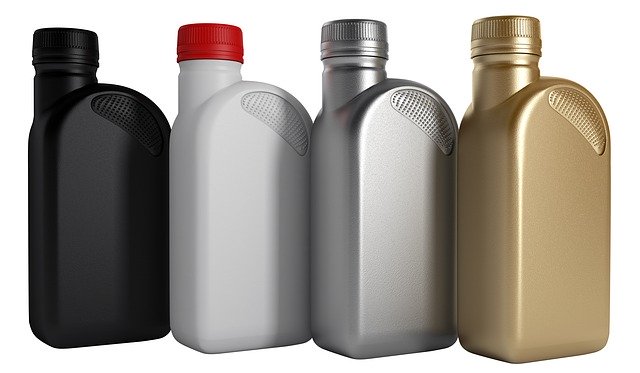 Getting old is a part of life that, sadly, there’s no escaping. Our skin loses elasticity, leading to wrinkles. Bones become less dense and more brittle, and muscles shrink and lose mass. To lessen the effects, doctors advise changing your routine. Whether that means taking vitamins, drinking less alcohol, or changing your eating habits. Would you believe that the engine in your car works much the same way? To counter the side-effects of an aging engine. Experts suggest switching to a motor-oil with additives made to increase longevity. What’s the best high mileage oil to ensure a long-lasting engine?

Here are our top-3 suggestions, including mineral, synthetic, and blended:

Let’s take a quick look at why oil is essential for your engine. As well as examine the different types of oil, and why it’s crucial to switch to a high mileage motor oil with additives once your car reaches a certain age. We’ll then review the top-5 best high mileage oil for trucks, cars, and SUVs, and answer a few of the most common questions.

What Does Oil Do? Why is Choosing the Best Oil for High Mileage Cars Important? 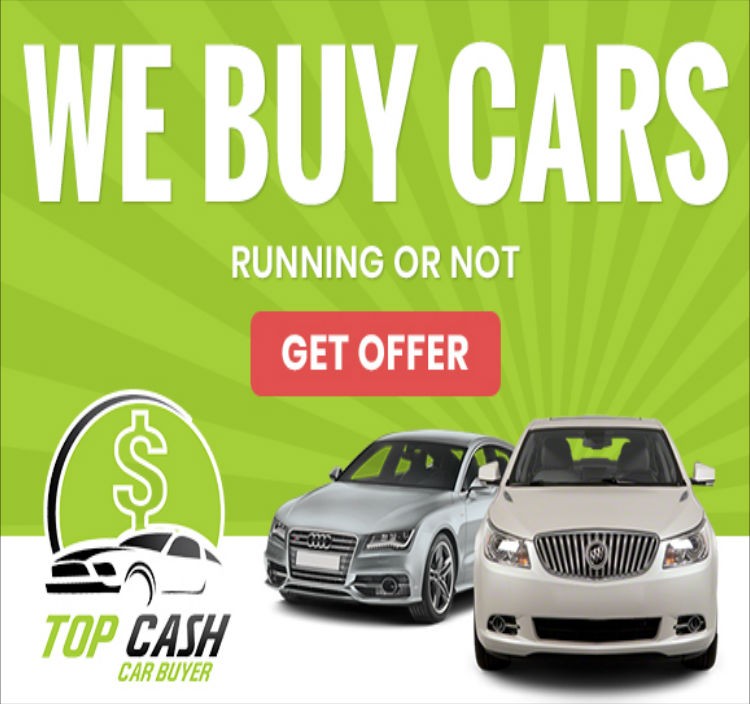 Your engine uses oil to stay lubricated. Ensuring parts like the crankshaft, camshaft, and pistons create as little friction as possible. Friction causes wear, which over time, leads to microscopic imperfections that can be devastating in the long run. On older cars, experts suggest high mileage oil due to additives. Such as seal conditioners, which restore the shape of seals and gaskets and increase flexibility. Let’s now examine the various types of motor oil available for your vehicle. 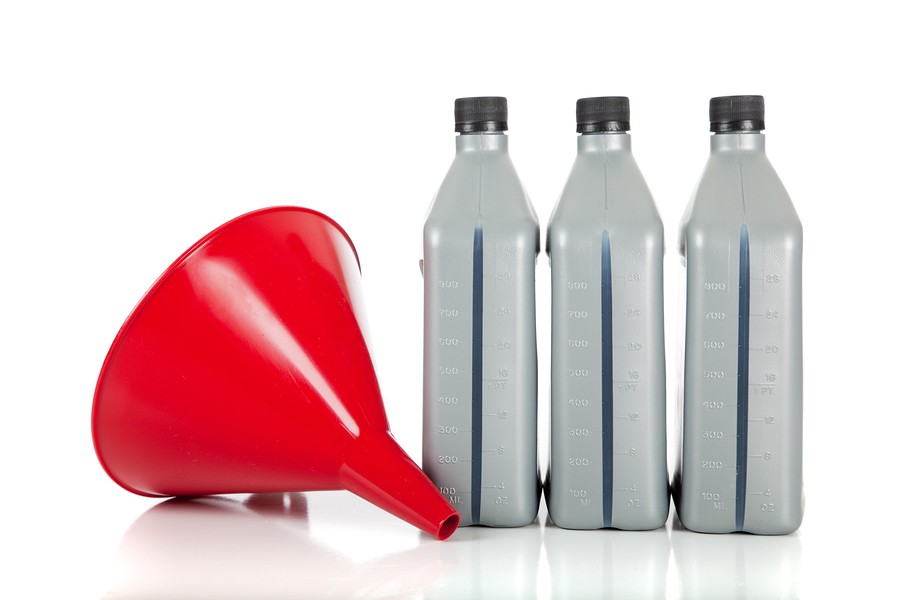 There are 3-types of motor oil, synthetic, mineral, and a blend of the two. What’s the best oil for high mileage engines? Typically, synthetic, if you’re OK spending 3 to 4 times the amount of conventional oil. Here are the options:

Mineral oil is petroleum-based and made mostly from natural ingredients.  Dating back to early combustion engines of the 1800s. The good thing about mineral oil is that it’s easy to produce, which makes it more affordable than newer alternatives.

First introduced in the late 90s, synthetic motor oil has quickly become a favorite for motorists worldwide. Yes, it costs a bit more (at least twice as much), but it also lasts as much as 3-times longer. They consist of a mix of different fluids. Which usually include Polyalphaolefin (oil stock), synthetic esters, and alkylated aromatics. One of the reasons synthetics hold up better is due to their molecular structure. Which are consistent in shape and mass compared to conventional oils. This translates to less friction when they collide, and therefore, less heat.

First introduced in the late 60s, a synthetic/mineral blend is a mix of the two (as you might have guessed). Not only is a blended motor oil more affordable than full synthetic. But it provides better lubrication and protection as well. If you take all of the negatives of regular oil, a blend fills in the gaps due to having additives like conditioners and anti-oxidants.

Let’s now examine a few of the most common additives in full/partially synthetic motor oil.

Additives are chemical compounds found in synthetic motor oils (as well as some blends). They do things like reduce friction, rejuvenate seals, and defend against corrosion. Here are a few of the most common:

Anti-foam agents limit the production of bubbles and foam that can cause corrosion, pitting, and loss of lubrication.

Corrosion inhibitors are a chemical compound that inhibits oxidation. Protecting against the development of corrosion and rust.

Defends against oxidation by creating a film on metal surfaces.  This deactivates metal ions, which can form a harmful residue over time.

Oxidation causes oil stock to break down. Anti-oxidants help limit degradation, which helps increase the lifespan of your oil.

Over time seals and gaskets can become dry and brittle, leading to shrinkage. Seal conditioners combat this by causing them to swell, therefore creating a better seal.  Doing so helps defend against critical issues like a blown head gasket, which usually means replacing the engine.

Petroleum oil contains plenty of impurities. Such as water, nitrogen, sulfur compounds, carbon dioxide, and metal traces. These can cause harm as your engine ages, which is where detergents come in. They help to clean and neutralize impurities before they can result in engine sludge.

Now that you have a better idea of how oil benefits your engine.  As well as the different types of oil, and what’s added to them to make them efficient.  Let’s look at some of the best high mileage motor oils to ensure your engine lasts as long as possible. 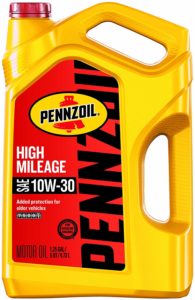 Because aged vehicles are not made to handle synthetics well. Synthetics do a better job of removing deposits that in older engines might be acting as a seal. This high mileage formula contains 100% petroleum-grade materials. And if you own an older vehicle, it was designed to run on Petro-based oil. It not only features detergents that will clean your motor and remove impurities. But also includes seal conditioners to prevent leaky seals and help restore them. Pennzoil high mileage is made for engines with 75,000 or more miles.  While it is a little more expensive than other conventional options, the added protection is well worth the extra cost. 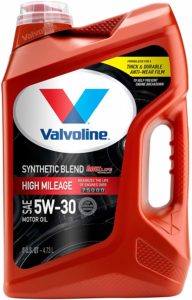 Because it’s specially formulated to prolong engine life due to having an impressive blend of modern additives. Such as seal conditioners, which improve the health of seals and gaskets. It also contains rust inhibitors. Which protects against corrosion and rust deposits that lead to premature engine failure. Detergents and anti-oxidants are part of the equation as well. Which not only removes harmful deposits but protect against them as well. While it might restrict performance a little, it’s sure to restore older engines to keep them running smoothly. It’s also safer on older vehicles due to a premium conventional base stock. 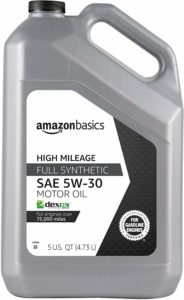 Because older vehicles don’t do well with full synthetic motor oils. For 1993 models and new, though, this is a great option. Not only is it formulated to reduce friction, which reduces wear and tear. But it should improve fuel economy as well. Thanks to the patented formula, it’s also resistant to thermal breakdown. Meaning you can depend on it regardless of the temperature outside. The inclusion of anti-wear agents and rust inhibitors makes it one of the best oils for high mileage engines. Who would have thought a motor oil made by Amazon would end up as one of the highest-value options available?

Now that we’ve covered a few of the best motor oils for high mileage cars, trucks, and SUVs.  Let’s answer a few of the most commonly asked questions.

There are two ways to look at it. The first is to switch to high mileage motor oil at about 75,000 miles. This is usually when an engine can benefit from compounds added to high mileage formulas. Things like degraded seals, which swell from seal conditioners. Or corrosion, which is countered by using rust inhibitors.

The other option is to switch to a high mileage oil when you start seeing signs of aging. The most apparent one is a fluid leak, which suggests your seals are degraded.  By catching issues early, you reduce the likelihood of costly repairs being needed down the line.

Yes, extreme temperatures in either direction affect how well the oil in your engine performs. Cold weather slows the flow of motor oil due to it being thicker. This puts more stress on your oil pump, which can lead to it failing earlier than usual.

When it’s hot outside, the oil in your engine becomes thinner.  When this happens, it circulates faster, which means the engine won’t receive the protection it needs to stay healthy.  By switching to a high mileage motor oil with additives like Anti-oxidants and seal conditioners. You help negate these issues before they cause extensive damage.

There are several schools of thought on this.  The first is that as engines age, they become less tight. Things loosen, parts degrade, and performance suffers.  In this case, many suggest increasing the frequency of oil changes as your engine gets older.

The other view is that you don’t have to change it more often because there’s no risk of voiding your factory warranty.  And that any wear that could happen already has. The best way to look at it is to do so according to the health of your engine.

If a pressure test concludes that you’re losing pressure, try not to extend the intervals. If your engine is burning oil, don’t stretch it.  How often should you change the oil in your car?  For older motors, if everything is running correctly, as much as every 5,000 miles.  For newer engines, you should be safe stretching this to 7,500 or even 10,000 miles.

When it comes to ensuring our cars stay healthy for as long as possible, a few extra dollars on a high mileage motor is a safe investment. Most are designed to help with leaks caused by degraded seals and gaskets. Leading to significant issues that might signal the end of your engine. The same goes for detergents, which clean out sludge that can build up and cause more wear on your engine.

Automotive technology has come a long way since the original Model T. Why deny it?  Instead, consider switching to an advanced motor oil proven to help extend the life of older engines.

The answer’s pretty simple if you’ve done your research – high mileage oil with additives is best. Give your engine a fighting chance in its old age, by providing it with beneficial compounds designed to extend its lifespan. Whether you choose a mineral, synthetic, or a blend, switching to a high mileage formula is sure to keep it running strong.

For older motors, consider sticking with a conventional high mileage mineral oil offered by Pennzoil. For a newer model (1993 and up), it might be beneficial to switch to a synthetic oil such as AmazonBasics, so long as you can afford the price increase.  If you can’t, a blend such as Valvoline with MaxLife should be the perfect middle ground.