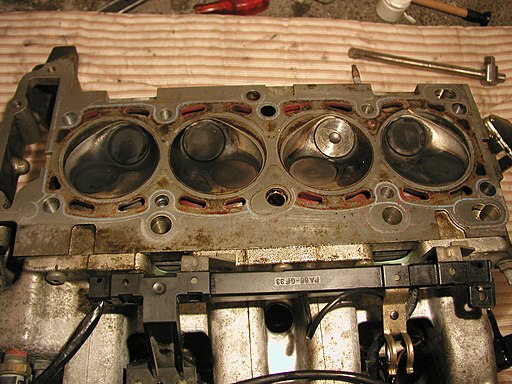 How much does fixing a blown head gasket cost? The parts themselves aren’t expensive, it’s the amount of labor required that makes it costly. A head gasket repair can take anywhere from six hours to several days to complete.  The average out of pocket amount is usually between $1,000 and $2,000, meaning it might be better to junk the car rather than fix it.

The truth of the matter is that even mentioning the phrase “changing a head gasket” is enough to make anyone feel queasy.  Thankfully, in this article, we’ll review everything you need to know about this pricey issue.  Including what it is, what causes it, and how to test for it.  As well as whether it’s worth repairing, and how much it is to fix a blown head gasket.

The concept behind a head gasket is simple.  To seal the connection between the engine block and cylinder head.  This seal ensures oil and coolant can travel between, lubricating the engine and holding it within a safe temperature range.  It also seals the combustion chamber, keeping the pressure created by the spark plugs from seeping out.  Without an ample supply of lubricant, and without enough coolant.  The engine can either seize or overheat, which can lead to catastrophic problems. Additionally, if there’s not enough pressure to move the pistons, the motor won’t have enough power to continue running.

As you can see, the head gasket plays an essential role in the operation of your engine. When it’s no longer able to do its job, it’s officially considered “blown,” meaning you’ll need a new head gasket. The main reason a blown head gasket costs so much is due to its hard-to-reach location. Making it not only time-consuming to replace but challenging as well. It’s not like replacing a spark plug or an oil filter, which are both easy to get to. To reach the head gasket, you have to strip the engine of almost every major part.

The most important thing about a head gasket replacement is doing so at the first signs of an issue. Ignoring it can lead to severe problems, such as a cracked engine block or warped head.  These often result from the engine getting too hot due to a lack of coolant, usually stemming from a leak. What are head gaskets made from?  There are a few options to consider, though, regardless of the material, the gasket itself will rarely cost more than $350.

Graphite gaskets are not only excellent at dissipating heat, which guards against burnout. But they’re also more affordable, which lowers the total gasket replacement cost.  Their ability to withstand high-temperatures helps ensure they don’t become brittle or creep.  Graphite also seals better on rough surfaces compared to other options due to their compressibility. Which is perfect if you have components made from different materials, such as an aluminum head on an iron block.

Though mostly discontinued, composite gaskets are a solid choice when dealing with mods because they are easy to trim. They’re often comprised out of graphite and asbestos, which makes them resistant to coolant, gasoline, oil, and alcohol. But this is also why they’re less popular since asbestos is toxic.

Rubber gaskets are popular due to how easy they are to install compared to other options.  They’re also fantastic at resisting heat, as well as preventing leaks due to their flexibility.  If you’re trying to keep the cost to fix a blown head gasket down, rubber is a great choice.

Cork gaskets are highly compressible, which is excellent for creating a tight seal.  They’re also capable of withstanding high-temperature and high-vacuum situations. The negative to a cork gasket is that over time they dry out, which makes them brittle and likely to crack and crumble.  The other downside is that when you remove them, they tend to tear and leave behind a residue.

Copper is a little pricier, but worth the added amount if you own a high-performance vehicle.  Copper head gaskets distribute heat evenly, which minimizes warping, and if you have a lot of aftermarket parts, they generate a lot of heat. They’re also malleable, meaning they can conform to almost any surface no matter how rough and create a tight seal.

MLS head gaskets are the most popular choice for most modern vehicles. They’re comprised of several thin layers of steel that are coated to help it conform to the surface of the block and head. Their design makes them nearly immune to distortion. Which makes them ideal for supercharged or turbocharged models. Though they’re a little costlier, they tend to last a long time, even under extreme pressure.

Now that you have a better idea of what a head gasket is and what they’re made from.  Let’s look at what causes you to need to replace a head gasket.

What Causes You to Need a Blown Head Gasket Repair As we mentioned earlier, the job of a head gasket is to seal the link between the engine block and cylinder head. It allows fluids like oil and coolant to run through without seeping out where it doesn’t belong.  When it’s no longer able to do so, it’s considered “blown,” and you’ll need to start the process of getting ahead gasket repair estimate.  Not doing so will eventually lead to even worse problems, such as a cracked engine block or warped cylinder head.

Head gaskets fail for many reasons, including the installation of a faulty part or wear and tear. Nothing lasts forever, including a head gasket.  Thankfully, most should last as long as 10-years, so long as you maintain the condition of your engine and cooling system. It’s far more common in performance cars due to overworking the engine past what it’s capable of. Investing in a copper or MLS head gasket is a great way to minimize the chances of it blowing.

How do you know when you’ve blown a head gasket? The first sign is usually a loss of power due to pressure escaping between the seal. Second, you’ll likely experience overheating.  Which happens when exhaust gasses seep into the cooling system rather than out the tailpipe.  Another possible result is coolant entering the combustion chambers, causing what’s known as Hydro Lock. If this happens, the engine will likely seize, and yield some expensive repairs.

Does white smoke mean a blown head gasket? Good guess, and yes, it’s possible.  This occurs when anti-freeze escapes through the faulty head gasket and enters the combustion chamber. Resulting in a thick, “sweet-smelling,” white smoke as it burns off.

As we’ve said before, replacing a blown head gasket as early as possible is crucial for preventing further damage.

Additional signs to watch out for include:

The primary cause of a blown head gasket is engine overheating due to extreme temperatures. This can happen from several things.  Such as adding performance-enhancing parts to your car that push it past what it’s capable of.  Or getting crushed and damaged due to movement between the engine block and cylinder head.  There’s also the chance you have an issue with another part of your engine.  Such as the cooling system.  If your water pump goes out, not enough coolant will circulate to keep the engine at a safe temperature, resulting in a blown head gasket.

Regardless of “how” it happened – it did.  Do yourself a favor and replace it before a blown gasket leads to something worse.

Let’s examine how to test for a blown head gasket.

Can You Test for a Blown Head Gasket? Thankfully, you don’t always have to take your car to a shop or wait for symptoms to worsen to find out if you’ve blown a head gasket.

Let’s look at a few simple ways to test whether you need gasket repairs:

You can check if any coolant has begun leaking into the oil by inspecting the oil filler cover.  Wait for the engine to cool down and then remove the cap.  If you notice a milky brown substance on the bottom, then there’s a leak somewhere.  While this doesn’t specifically mean you have a blown head gasket, it does signal a significant concern.  A small amount of moisture is perfectly fine.

As we’ve previously stated, the head gasket keeps coolant where it belongs, within the engine block and cylinder head.  When it starts to go fail, there’s a chance some of it leaks into the combustion chamber.  You can check for this by first removing all of the spark plugs.  Then, turn on your AC and crank the fan, start the engine, and observe the holes where the spark plugs were.  If you notice fluid (coolant) in any of them, bad news, you have a blown head gasket.

One of the signs of a failed head gasket is exhaust gasses going elsewhere other than out the tailpipe.  One of these places is in the coolant.  You can check for this by removing the radiator cap while the engine is cold and scanning for foamy bubbles.  Be sure the engine isn’t hot.  Otherwise, you risk releasing a pressurized burst of hot coolant.

Additional ways to check for a blown head gasket are a little more complicated. They consist of performing a pressure test on the cylinders or doing a chemical test. Either of these methods requires purchasing products online or at a local auto parts store. If you would rather have a professional shop perform the tests, expect to pay around $100 for each.

Now that you have a better idea of how to tell if you need to replace a head gasket.  Let’s dive into the average cost of head gasket repair.

How much Does it Cost to Repair a Blown Gasket? Let’s say you got lucky, and no further damage was caused before replacing a head gasket.  The cost of a head gasket is rarely more than $350, and that’s if you purchase a high-performance one.  The average cost to replace a head gasket, though, without factoring in labor, is usually less than $100.

The most significant factor in replacing a head gasket? Labor hours, which can run anywhere from 6 hours to several days.  Depending on the complexity of the engine, the cost of labor often ranges between $1,000 to $2,000.  Though, this can reach as high as $2,500 as well.  Remember, to get to the head gasket, nearly every major part has to be removed.  Not only that, but they also have to put it back together.  If you own a newer model with a turbocharger or supercharger, expect it to cost more than an older one without.

Is it worth fixing a head gasket? At the end of the day, the choice is up to you.  A great way to break it down, though, is that if the blown head gasket fix totals more than the value of your car, it’s not worth fixing it.

What if Instead of Worrying About the Cost of Replacing a Head Gasket – You Got Paid for it Instead? If you thought owning a car with a blown head gasket was a pain, imagine trying to sell one.  Who in their right mind would buy a vehicle with major mechanical issues?  CashCarsBuyers would.  We buy all cars, truck, and SUVs, regardless of the shape they’re in.  Did you just receive the news your head gasket is blown?  Sorry to hear that, how about you sell it to us instead?  Not only will we pay you a competitive amount of cash for it, but we’ll tow it away free of charge.

The process is simple.  Head to our site and click on “Get Instant Offer.”  If you like what you see we’ll schedule a quick at-home inspection.  If everything matches, we’ll pay you on the spot and haul it away.  Prefer to speak to a live person?  Call of directly at (844)-663-7286.