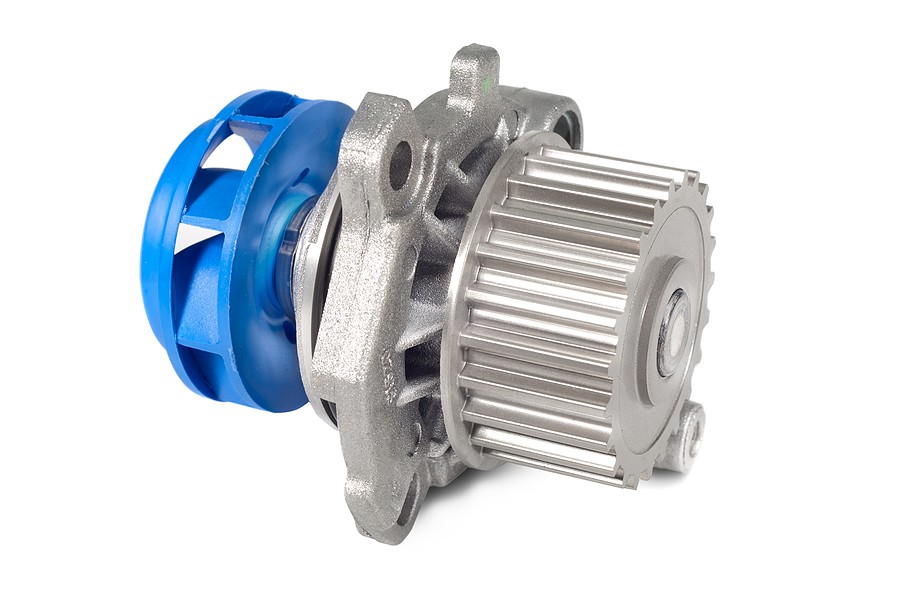 A water pump is essential to the performance of a car engine because it keeps the coolant moving through the engine block, cylinder head, hoses, and radiator at the proper temperature.

Per mile driven, an average water pump transports 7 liters of coolant. After 100,000 kilometers, a water pump had transferred 700,000 gallons of coolant. Water pumps are expected to wear out over time causing bad water pump noise.

Many people are unaware of how much work a water pump does, but your vehicle's water pump has a lot going on. The engine turns the water pump's belt, which rotates the water pump's axle in most cars. The axle is attached to a series of vanes that revolve in tandem with it. The spinning motion causes suction, which pushes the water out of the radiator.

When water enters the pump, centrifugal force forces it against the pump's outer walls, sending it down a drain to the engine block. The water circulates through the cylinder heads before draining back into the radiator, where the cycle repeats.

Keep in mind that the timing belt is frequently used to drive the pump. In that situation, the pump and the belt must both be replaced at the same time. In fact, some manufacturers advise that the pump be replaced every time the belt is changed.

It's simple to keep a healthy water pump: make sure the engine coolant is in good shape and contains the necessary specification and volume of antifreeze. The latter prevents the water from freezing in cold weather and acts as a rust inhibitor, keeping small particles from breaking off within the engine and wearing down the pump's components. Bad water pumps could cause damage to the engine including broken cylinder heads, pushed head gaskets, or burnt pistons if the water pump is not fixed or replaced soon.

What causes a water pump to go bad?

Water pump failure can be caused by dry operation, improper use of seals, gaskets or sealants, coolant issues, and improperly installed drive belts.

Coolant is essential for keeping the engine cool by maintaining an effective seal inside the water pump. This “mechanical seal” is a “dynamic seal” that is common in rotating machinery like pumps. When a water pump is turned on, a little gap between the pump's internal two rings that rotate relative to one another could allow liquid to seep out. A fluid barrier generated by coolant between the rings is required to prevent leakage. The rings can be irreversibly damaged by dry rotation of the water pump, resulting in early noise and/or coolant leakage.

To avoid this, fill the cooling circuit with coolant first, then rotate the pump's drive pulley 10 times without the belt tensioner on the pulley. Before the engine is started, a small amount of coolant will establish the mechanical seal.

Water pump failure could also be a result of improper use of gasket, seal or sealant. This can easily cause the water pump to be poorly mounted, or even worse, damage some sensitive components like seals, resulting in coolant leakage. New gaskets and seals should be used in place of the old ones. Only use sealant if the manufacturer clearly recommends it. Sealing paste should not be used if the pump has a gasket or seal because it can cause difficulties.

Plastic impellers (fan blades) are used in some modern water pumps, and they can shatter. As a result, vibrations occur, causing the pump to fail. It's also possible for the impeller to become loose on the shaft, which means that even if the impeller appears to be in good condition, it's not pumping anything!

Sealant must also be applied correctly. Apply an even thin bead of sealant around the edge and around the coolant passageways on the impeller side of the pump. The appropriate installation is jeopardized by an excessive amount of sealant. When you begin to twist the bolts, the pump may become misaligned, and excess paste may wind up in the cooling circuit, causing serious damage.

Contaminants in a coolant can scrape or reduce the wear resistance of the water pump's internal seals, allowing coolant to escape. Non-suitable coolant fails to provide the needed level of rust and corrosion protection, causing the pump's individual components to fail.

Before installing a new water pump, you should drain and flush the cooling circuit completely. The coolant should be completely replaced with the specified coolant by the car manufacturer. The cooling system is much more complicated than it used to be, with components constructed of a variety of materials. The growing popularity of vehicle-manufacturer-approved coolants is due to the necessity to safeguard these components from rust and corrosion.

By replacing both the belt drive and the water pump at the same time using an all-in-one kit, the belt drive and water pump's lifetimes are extended and the chance of early failure is reduced. Follow the manufacturer's fitting directions, tensioning process, and torque parameters to the letter.

What are signs of a bad water pump?

A few signs your water pump is going bad are coolant leak at the front-center of your car, bad water pump noises, engine overheating and steam from the radiator.

You might hear a high-pitched sound coming from the front of the engine from time to time, which is caused by a loose belt creating a harmonic buzzing or whining sound as it circulates. A loose belt is frequently caused by a loose pulley or worn-out bearings in the water pump assembly.

The water pump will not be able to circulate coolant through the engine block if it malfunctions altogether. As a result, the situation becomes overheated. Finally, if you detect steam pouring from the front of your engine when driving or stopping, you have an overheated engine. As previously stated, when the water pump functions properly and pumps water to a functioning radiator, the engine maintains a steady temperature.

What does it sound like when your water pump is going out?

A faulty water pump has the potential to overheat and damage your engine if given the chance. Although most modern automobiles, trucks, and SUVs' water pumps will last a long time, they are not infallible. They will exhibit a few warning signals of wear and tear, just like any other mechanical device. Thankfully, we don't have to go to that stage.

To help you guide your customers through diagnosing water pump issues, here’s a list of the most common bad water pump noise and their causes.

Bad water pump noise such as click or squeak might be caused by worn bearings. When the engine is idling, they can be heard. After turning off the engine and releasing the tensioner, you may be able to hear them more clearly. You can manually rotate the pump and listen for noises.

A rattling sound can indicate one of two problems: poor bearings or a bent or damaged impeller shaft. The most prevalent reason for water pump failure is worn-out bearings. Over time, water pumps circulate a lot of coolant, and they simply wear out.

When belt tensioners are worn out, they might also rattle. If the belt is slack, spin the pump by hand to see if it rotates smoothly. Do the same thing with the tensioners. Improper belt tension can cause impeller shafts to bend. It's likely that you have overlooked the water pump problem for a long period if an impeller shaft is broken.

Furthermore, combining different coolants or using the wrong coolant can damage the water pump seals and cause the bearings and impeller shaft to fail before it’s time. Look for evidence of rust on the impeller. If the impeller appears to be rusted, the cooling system should be flushed and refilled.

A whining or groaning noise usually indicates a loose drive belt or a damaged water pump pulley. Pulley failure can sometimes be caused by rust, which causes cracking between the bolt holes. This produces the noise by allowing the pulley to flex slightly while spinning. V-belt pulleys can also be damaged by over-tightened or incorrectly sized belts. A loose belt can be caused by worn belts or worn belt tensioners. As a result, the water pump may not turn as quickly as it should, causing the engine to overheat.

If you are starting to hear bad water pump noises, the water pump will most likely need to be replaced. However, when other parts fail, they can produce similar noises, so you need to make sure you or your technician have identified the issue accurately before doing anything big.

Bad water pump noise like grinding or rumbling could mean worn water pump bearings. Although the bearings may be able to be replaced, the seals are likely to be worn as well. The entire pump is usually replaced for peace of mind as they're not that expensive.

Can you drive with a bad water pump bearing?

When certain parts of a vehicle fail, they do not need to be replaced right away. But that is not the case when it comes to your vehicle’s water pump. Because of the pump's critical role in cooling the engine, if it fails, there will be immediate implications, including possible engine failure.

To relieve heat buildup, the water pump circulates coolant through the radiator and around the engine. Friction and heat are generated by rapidly moving, closely linked metal parts. If you utilize too much heat, you'll wind up with deformed, melted, fused, fractured, and otherwise structurally compromised components.

Driving a vehicle with a defective water pump, especially if the bearings are broken, is not recommended. It's likely that your engine will suffer major harm if the water pump malfunctions while you're driving.

Because your water pump is so important to the proper operation of your car, it should be checked at every radiator service. This should be done in accordance with the manufacturer's maintenance schedule, which can be found in your owner's handbook.

If mechanics discover a problem with your water pump when you bring your car in, they will need to replace the water pump as well as the coolant, as the replacement process loses a lot of coolant.