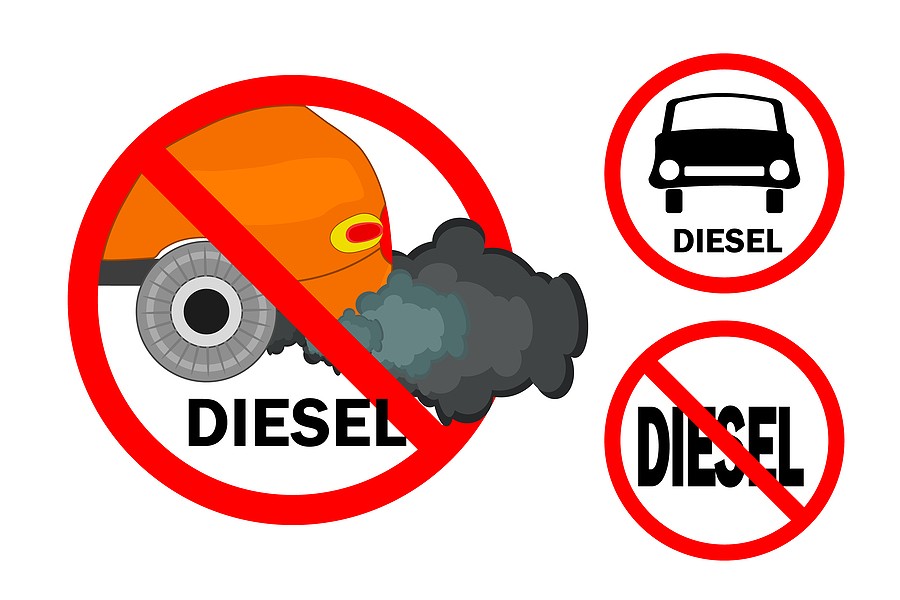 If you're wondering “what happens if you put diesel in a gas car?” The outcomes depend on the the amount of diesel used and whether you started your car or not. In general, using diesel in a gasoline car can cause a power reduction, very heavy smoke, and failed catalytic converter.

Putting diesel in a gasoline car is a very common mistake that people make all the time. Both nozzles are located just right next to each other, and a driver pulls the wrong nozzle and starts feeling the vehicle without paying attention. It's a diesel nozzle. What will happen?!

The diesel fuel pump nozzle is designed in a way to have its own built-in precautions. The design itself makes it inappropriate to fill the gasoline tank using a diesel nozzle. Also, the diesel neck comes in a totally different color to help drivers differentiate between the two. However, this doesn't mean that some inexperienced drivers will mistake and put diesel in a gas car.

What's the main difference between gasoline and diesel combustion?

Before we dive into the details about “what happens if you put diesel in a gas car?” Let's make sure that we are on the same page regarding each fuel combustion system.

In regular gasoline vehicles, the combustion process starts with the air intake opening allowing air to enter the cylinders. Then, immediately the fuel gets injected into the combustion cylinder. After the air and fuel get mixed, the piston compresses them upwards to heat them and prepare them for ignition.

When the air-fuel mixture is ready for ignition and it's compressed enough, the spark plug provides the necessary spark at the right time to ignite the mixture.

In most gasoline combustion systems, the entire air-fuel mixture ignites simultaneously, and there will be no leftovers. However, that's not the case with diesel engines.

One of the biggest differences between the diesel and gasoline combustion systems is the air-fuel mixture. There must be a certain fixed amount of air to fuel ratio in gasoline combustion systems, and this amount is about 14.7 air to one fuel. On the other hand, the diesel engine does not require this fixed ratio. There are situations where you will see about 60 parts of air to one part of diesel fuel.

As a result, the air-fuel mixture in the diesel systems does not have to be completely ignited, and there will be some leftovers of air to be used in the next cycle.

Since diesel engines do not have a spark to ignite the fuel-air mixture, they usually include a different component called the glow plugs, which is responsible for heating up any air-fuel mixture when it's cold to get it to a point where it's ready to create the explosion when the compression is at the optimum level.

What happens if you put diesel in a gas car?

As you noticed earlier, the gasoline and diesel combustion systems are totally different in many characteristics. Therefore, putting diesel in a gasoline engine is a huge mistake, and it can cause significant results depending on how long the diesel has been in the vehicle. It also depends on whether you started the car and allowed the diesel to spread throughout the gasoline combustion system or not.

Let's take a closer look below at what to expect and what will happen if you put diesel in a gas car?

The first thing you'll notice when you put diesel in a gasoline car by mistake is issues with starting. Since diesel is much thicker than regular gasoline, your vehicle will not be able to spread out throughout the combustion system easily. You might not even have your combustion system burn the diesel in the 1st place.

Therefore, the gasoline might even stick in one location or turns into larger droplets that contaminate the entire fuel system.

If you looked at the tailpipe of any diesel vehicle, you'd notice that the smoke is heavy and black. This happens when the diesel engine does not have sufficient compression to burn all the diesel in the combustion system.

Imagine this diesel goes into a gasoline combustion system where the pressure is much lower than the diesel engine; what will happen? The combustion system will fail to burn any of this gasoline, and it will not even have the ability to burn the existing fuel in the cylinder. As a result, the first thing you will notice when putting the wrong fuel in a gasoline engine is heavy black smoke coming from the tailpipe. The smoke indicates that the fuel was not burnt completely in the air-fuel mixture.

Since the engine's primary role is to generate power, it will not generate any power if the engine feels to burn the air fuel mixture. Therefore, if you were lucky enough, you will just experience some loss of power. However, in difficult situations, your vehicle might not even run, and you will Deal with significant misfires and a huge reduction in fuel economy.

If you’re dealing with such situation, we advise you to reach out to Cash Cars Buyer who guarantees purchasing your car and paying you the top dollars!

What to do if you put diesel in a gas car?

Let's assume that the situation happened, and you pulled the wrong nozzle filled your car with diesel instead of gasoline. What can you do at this point? Well, here are some of the tips to help you reduce the adverse outcomes of using the wrong fuel in your gasoline vehicle:

The first and most important step in resolving the issue when using the wrong diesel in a gasoline engine is determining how much diesel you already put in the car. It doesn't have to be an exact amount. Just provide a rough estimate about whether it was half a tank or a full tank or something like this.

One of the biggest differences in outcomes when using the wrong fuel is starting the vehicle versus not. If you did not start the car after using the wrong fuel, you save yourself thousands of dollars, and you probably have a good chance to save the vehicle. However, by just turning on the engine and allowing the diesel to run through the combustion system, you can quickly cause significant damages to the entire system.

When you don't want the engine, the issue stays limited within the fuel tank, and you can clean the fuel tank remove the diesel, and get your vehicle going again. However, when you start the car, you won't be able to capture the problem, and it will be immediately affecting multiple components at the same time.

When the situation happened, get in the call with your local garage and explain to them what exactly happened and how much fuel you put in the vehicle. They should have a good idea about what you need to do in the meantime, and they can get to you immediately with the required tools. For example, if they know that you didn't start the car, they will know exactly that, or what they must do is drain the gas tank and get rid of the diesel. However, if you immediately explain to them that you started the car, they should have a better different plan.

What happens if you put gasoline in a diesel engine?

Another related question we discuss music is what happens if you put gasoline in a diesel engine. In other words, what will happen if the situation is reversed?

It might sound that it's safer and doesn't have any problems because the biggest concern was when we use diesel in a gasoline engine. Did you know that if the situation is reversed, the problem is more complicated?

When you put gasoline in a diesel engine, the gasoline is more susceptible to ignition than diesel, which means that the engine can explode immediately! The reversed situation is a huge mistake and can cost you the entire diesel engine.

Will 1 gallon of gas hurt a diesel?

Therefore, do not underestimate the severity of the situation. If you were put in this situation by mistake, you need to consult your mechanic as soon as possible and prevent starting the car for any reason.

Although the diesel and gasoline nozzles are completely different, pulling the wrong nozzle by mistake can happen in many situations. Unfortunately, using diesel in a gasoline car can significantly adversely impact whether you put a huge amount of diesel or started the vehicle after.

If your vehicle got into a terrible situation after using diesel in a gasoline engine, your best option might be to sell this car instead of dealing with the hassle, especially if you needed to replace the catalytic converter. The good news here is that Cash Cars Buyer is always here to assist you!

The best thing about Cash Cars Buyer is that our process is very straightforward and doesn't take more than a couple of days to get your vehicle removed safely and for the most money.