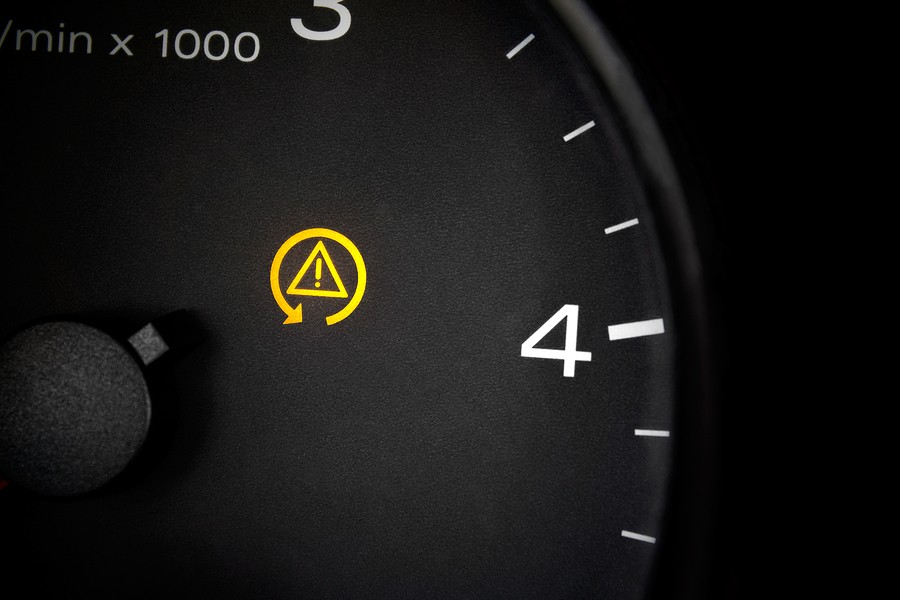 Which Light Is the Traction Control Light? There are over a dozen potential lights that can go off for one reason or another on your dash, and the symbols are not always easy to interpret at a glance. Your traction control light is probably going to look like the rear end of a car with some curvy lines behind it. It represents just what the name says, that there has been an issue with the traction of your tires and you’re swerving on.

In some cars the traction control light is represented by a circle formed by a counterclockwise arrow around a triangle with an exclamation point in it. In others it will look like a bulging tire with the letters “TC” inside of it and a slash across the whole symbol. If you’re not sure you can check your car’s owner’s manual and it will have a detailed list of all the warning lights and symbols and what they mean when they appear. But since it’s not feasible to check them while driving, just know that these three are the standard possibilities for a traction control light.

What Causes the Traction Control Light to Come On?

The most obvious cause for the traction control light to come on is that you’ve started slipping on a wet or icy road. Those who drive in wintery conditions should be very familiar with this. Serious potholes and rough roads may also cause it to come on, and in these instances, there is little to do for an immediate fix. Proceed with caution if you can and pull over to the side of the road when absolutely necessary. In icy conditions, you may feel the handling of your car become loose and unresponsive. Keep calm and use caution. Often it will only be just a quick patch of traction loss but be attentive and ensure you’re staying as safe as possible.

Wheel speed sensors help control your traction control system. Each wheel has one and they work with your anti-lock brake system to monitor your wheels and ensure they are working properly and in sync. They monitor the speed of each wheel as it rotates, and if something is off about one, the traction control system will be alerted. That’s how it normally works. If one of your wheel speed sensors is broken, then it can send a false signal to your traction control system that something is wrong when everything is fine. Getting to a mechanic to take a look at it is the best course of action to determine if this is what’s going on and get it repaired.

In some vehicles, your anti-lock brake system and your traction control system will share some of the same internal diagnostics. That means if one suffers a failure of some kind, the other may as well. This is another issue that will require the intervention of a skilled mechanic.

Most of the systems in modern cars are governed by computers and your traction control is no different. When the light comes on it’s possible that the computer governing the system is suffering some kind of error. Just like your home computer can have a bug in the software or suffer from a failure of some kind thanks to bad wiring or a short, so too can the computer systems in your car. Diagnosing this as the cause is often a process of elimination. If nothing else is the obvious cost, it may be worth it to check the computer and see if there’s an error in there. Again, a mechanic is going to need to do this on your behalf if you’re not skilled in this kind of diagnostic yourself.

Just like your wheels have sensors, your steering wheel has a sensor too. The steering angle sensor tracks the rate of turn of your wheel and its position angle. If the sensor

suffers a malfunction of some kind it could trip the traction control light. Sadly, this too   means you need the help of a mechanic as it’s not something you’re going to be able to handle on your own.

While these are the main causes of the traction control light to come on, the circumstances that can lead to this happening are varied. For instance, some GM vehicles’ wheel speed sensors will jam up not because they’re broken but because dirt and grime from the road cakes up on them and causes them to malfunction. A quick clean and they're good as new.

Is it Safe To Drive With the Traction Control Light On?

There’s no need to panic when your traction control light comes on because it’s supposed to come on when it’s engaged. Traction control is a safety feature on your vehicle and it’s going to make your ride safer when it needs to engage. In unsafe driving conditions such as on an icy road, you’re likely to see this light come on and off as you hit slippery patches. That’s perfectly normal and while you should proceed with caution it's only because the road is slippery, not because of the traction control light. Your car is working the way it was designed to, attempting to compensate for that poor traction caused by the ice.

If the traction control light won’t turn off when you’re not experiencing anything that should obviously cause a traction issue for your vehicle like ice on the road, then it is likely one of the other causes we listed. The first thing you can do to help diagnose the issue is to find a place to pull over and turn the car off. When you turn it back on, if the light is still on then it’s not just a random fluke and not road conditions so you need to go to the next level. In that case, if your car is responding as normal, you can still drive but you should do so with caution and get your car into a mechanic as soon as you can to get things checked out.  A mechanic will be able to properly diagnose which of these issues is causing the traction control light to turn on and repair the issue.

Should I Turn Traction Control Off?

Most cars give you the option to temporarily disable traction control and thus turn off the traction control light. You can do this but only in certain circumstances and only temporarily. To start, do not turn it off if the light has come on and you don’t know why. That’s not an effective way to deal with the issue and you’re going to want to get the situation dealt with as soon as you can. That sad, there are other times when turning off traction control can be beneficial.

Traction control has a habit of overcompensating when you’re starting on a slippery patch. If you parked in snow and then want to start your car again, the traction control could potentially make it very difficult to get moving again because all of your wheels are slipping, and the system is trying to adjust. If you turn it off, you can do the old school rocking back and forth maneuver to escape your slippery trap. Once you’re safely moving, turn it back on.

This is very similar to starting in the snow. Your traction control will kick in when you’re stuck in mud and keep trying to compensate. If you turn it off, you’ll be better able to find some purchase with your wheels and rock yourself free.

Tire chains aren’t legal everywhere but if you are in a place where you’re free to use them, the traction control can be a distracting tool when using them. They work best when your wheels are free to spin and bite into the ground so the chains can get a grip.

If you do have reason to turn your traction control off, make sure you turn it back on as soon as you’re out of the situation which caused you to disable it. Traction control is a safety feature and you want to keep it on whenever possible.

What Does it Cost to Fix Your Traction Control Light?

As we’ve seen, the reasons your light comes on can be varied. Because there are a number of issues ranging from just grime on a sensor all the way to corroded wires, faulty computer parts, an issue with your ABS brakes and more there’s no real way to give a definitive answer to what it might cost to have a mechanic address the issue for you and exactly how to fix the traction control light.

The diagnostic test that a mechanic will perform in order to figure out what the issue is can cost anywhere from $60 to $120 or so depending on where you live and the mechanic you choose. As with anything it’s best to shop around a bit and call ahead to get some quotes so you have an idea of what shops in your area charge for this service and which one is going to give you the best deal.

If we had to ballpark it for you and keep in mind this can change greatly depending on the make, model and year of your car, a repair for any of the issues we’ve listed above could range from a few hundred dollars to upwards of $1000. It all depends on the extent of the issue which first needs to be properly diagnosed. Your best bet is to get that diagnosis and talk it over with your mechanic to find out what the best course of action is.

Do You Need To Fix Your Traction Control?

The short answer here is yes. It may seem like you don’t need traction control, especially if you don’t live where the roads get icy, but the problem is that the traction control light may be activated for a more serious reason. If it’s an ABS brake-related problem, then you could be risking your brake system by not getting a mechanic to fix the issue and that could be catastrophic. You never want to take chances with your safety and the safety of your family and other drivers when you’re behind the wheel. Get it checked out when you can.