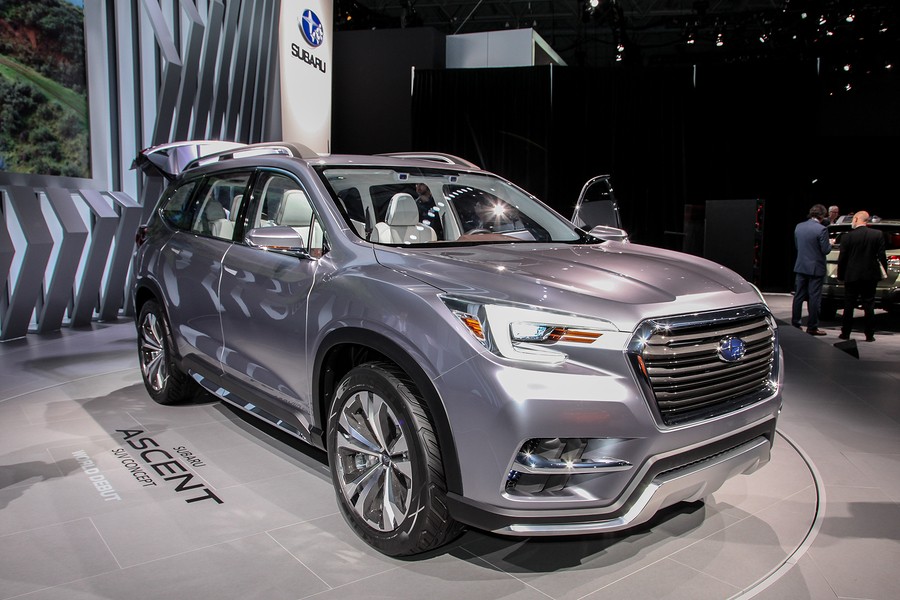 When it comes to the  Subaru Ascent vs the Toyota Highlander, these are two midsize SUVs that tend to fall to the middle of the pack in terms of ratings. That isn't to say that these are poor vehicles in any way it's just that there's never been real standouts in this class. Because they're both middle of the road, it can be difficult to determine which one might be the better option. A lot of their stats are similar so it takes a bit of digging to get to the bottom of which one might be better suited for your needs if you're in the market for a midsize SUV.

Toyota is world-renowned for its high quality, but Subaru is right at their heels in terms of reliable automobiles that offer great safety and great value for consumers. If you're on the fence about whether the Subaru Ascent or the Toyota Highlander are a good choice for you, take a look at our breakdown and will let you know which one stands out in ways that can help you make that choice.

Which Model is Most Reliable?

In a real-world test of reliability, the Subaru Ascent is good for driving you and your family around with a good deal of gear in the back. But when it comes to pushing the limit of what the specs say it can do, it seems to come up short. Car and Driver attempted to put the Subaru to the test by having it tow an Airstream trailer behind it from one state to another. And while it certainly managed to get the trailer where it was going with its proclaimed 5000lb towing capacity the editors did notice that it drained the engine to the point that they were only getting 9 miles to the gallon in terms of fuel economy. That's a far cry from the boasted specs.

In terms of manufacturer recalls, the Toyota Highlander does have one recall for the 2020 model year. It's a small recall affecting only 38,000 vehicles, and it relates to a computer error which could cause the vehicle to stall out. The Subaru Ascent however has no recalls listed for it.

It's really a close competition here in terms of what each vehicle brings to the table for reliability. These are two remarkably safe vehicles and their reliability is essentially neck-and-neck. We're going to give the slight edge in this competition to the Toyota Highlander simply because when you force the Subaru to its limits it really makes you pay for it with that sacrificed gas mileage, which is likely a result of its lower horsepower. But if you're just driving the family and some camping gear around in the back, it's very likely that you wouldn't notice a difference between either one of these vehicles.

The Toyota Highlander is emblematic of the kind of quality you would expect from any Toyota vehicle at this point. That said, it's been noted that the Highlander, while a perfectly reasonable SUV, is also kind of middle of the road. It's not a standout in terms of performance and has been described as not being as fun to drive as some other models. Of course, no one is buying an SUV to have Fast and Furious races on the weekends, but you do hope that it's an enjoyable ride when you get behind the wheel. The Highlander tends to fall a little short in that regard. US News & World Report has it ranked 15 in midsize SUVs.

Subaru Ascent ranks just ahead of the Highlander according to US News & World Report rankings coming in at 13. Of note is that it has a quiet and comfortable cabin and a nice smooth ride when you're driving. It also comes with standard all-wheel drive, which gives it a bit of an advantage in the performance department. The powertrain is described as peppy and overall, it's a decent drive even if it's not at the very top of the Heap alongside vehicles like the Hyundai Santa Fe.

By the numbers, the Toyota Highlander offers up a 3.5 L V6 engine versus the Subaru Ascent 2.4 L turbo flat-4 engine. The difference here is 295-horsepower for the Highlander versus 260-horsepower for the Ascent. Both vehicles offer up the same 5,000 lb towing capacity but as you can see the Ascent falls a little short in terms of horsepower. For performance, Toyota wins.

Which Model is Most Affordable?

Midsize crossover SUVs are not economy cars for the thrifty driver. You're making a sizable investment if you're looking at either the Subaru Ascent or the Toyota Highlander. For the 2020 Subaru Ascent you're looking at anywhere from $31,000 to about $45,000 depending on the trim level and options that you go in for. The Toyota Highlander for 2020 is going to set you back in the range from $34,000 to $48,000. As you can see these are both costly vehicles compared to some of the compact SUVs that may be on the road. The 2020 Dodge Journey starts at $24,990 for instance. But when you're looking for a midsize SUV you want a larger vehicle that performs well and has those features that make it a more comfortable and enjoyable ride. You're paying for quality here and both Subaru and Toyota are offering you a decent range of features.

When you're comparing costs of maintaining and operating a vehicle, Car and Driver reviewed the Subaru Ascent and after a year on the road and over 30,000 miles. They racked up about $700 worth of maintenance expenses, but nothing to cover wear and tear. They did crack a windshield, but that's not really something you can blame on the Subaru.

Toyota Highlander pulled in $489 worth of repairs based on the average as calculated by Repairpal.com. That puts the Highlander pretty much on average with other vehicles in its class for repairs.

Dollar for dollar you're getting great value, and very similar value, out of each of these vehicles. Fuel economy and repair costs are interchangeable here, so the deciding factor in which is the best value has to be that initial investment. And though as we said the trim package and options are going to raise or lower that for you, it's clear that the Subaru Ascent starts off as the more affordable choice.

Both of these SUVs are IIHS top safety picks meaning that you don't need to worry about the safety of you or your passengers nearly as much when you're behind the wheel of one of these SUVs. Both Toyota and Subaru have a long history of creating good quality automobiles that are comfortable, look good, and get you where you need to go. You could make a good case for either one of these vehicles, so we're saying that yes, both the Subaru Ascent and the Toyota Highlander are worth your time and money.

Which Model is the Best Choice?

The Ascent is a more economical choice when you factor in things like interior comfort, cargo space, and infotainment features. On the other hand, overall safety, reliability and performance on the road tip the scales in favour of the Toyota Highlander.

Both of these vehicles offer the same 3 year/36000-mile warranty, both have seating for 8 with a slightly cramped third-row, and both have very comparable cargo space. The base model Ascent does have more standard features like that all wheel drive and smartphone integration. The Ascent offers for different trim lines wow the Highlander man just to pull out a fifth. That doesn't affect the overall performance, but it is a nice creature comfort that may make it a standout depending on what it is you're looking for in your SUV.

We're going to call this one in favour of the Subaru Ascent by a hair. The cheaper price tag, and some superior comfort features that you'll get inside the vehicle, make for a slight edge here. Even though the Toyota Highlander does perform well and is dependable and reliable, the Subaru just slightly pulls ahead. Does that mean you make the wrong choice picking up the Toyota Highlander? not remotely. Each one is a solid entry into the midsize SUV Market.