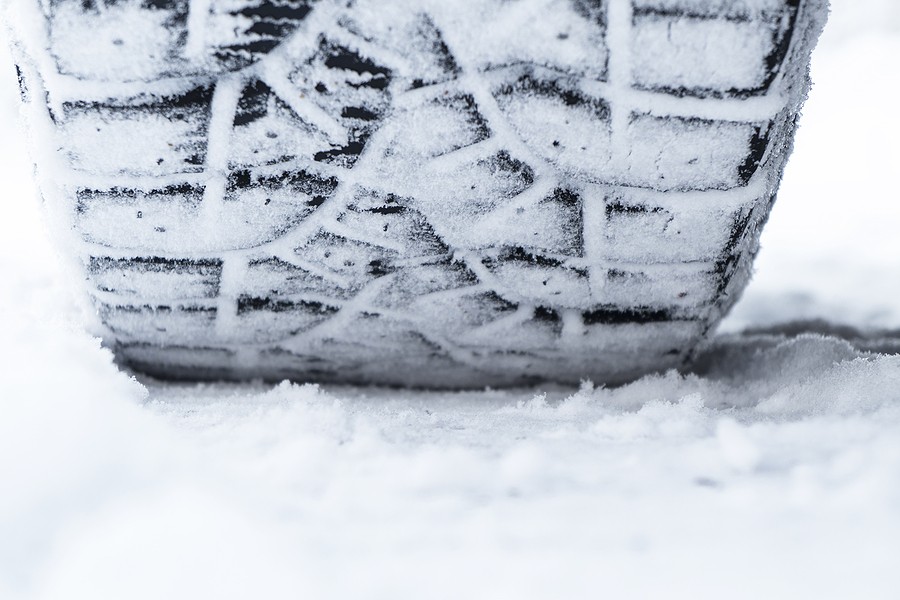 Studless snow tires can come in clutch when the roads are less than drivable. These tires use a special technology to better grip roads that are covered in snow or ice.

In the wintertime, people often worry about driving. There are many accidents that happen on the roads due to slippery conditions. When the roads are slick due to snow, rain, and ice, old tires just aren’t going to cut it.

In some emergency situations, or in rural location, all weather tires don’t cut it either. In these situations, people may be quick to turn to snow chains, studded snow tires, or studless snow tires.

Each technology has its advantages and disadvantages. Snow chains, for example, look cool. They work very well. However, you can’t drive on the regular roads with snow chains. This means you have to get out of the vehicle to install and uninstall them.

Studded snow tires are useful as well. The stud is like a little nail or screw that goes into a specially designed tire. The little piece of metal is a stud that quickly attaches and detaches itself to the compounded snow or ice on the road.

It makes for safer driving in some conditions. However, these tires are actually less effective on driving on a regular paved surface, wet or dry, during non-snowy driving conditions.

Studless snow tires are pricey and a specialty, but they get the job done most of time.

This blog offers some general advice on studless snow tires, but a mechanic’s word is final on all questions you have about what tires are appropriate for your car.

Be sure to check the owner’s manual as well.

What are Studless Snow Tires?

Before any vehicle owners get wrapped up in the mystery and excitement of the latest tire technology, studless snow tires, they should do their homework.

Studless snow tires are useful for snowy and icy weather conditions thanks to a technology that helps better adhere to the roads.

Nobody wants to drive in icy conditions nor in a blizzard. When it’s snowing outside, the roads aren’t easy to navigate. The car veers left and right. The brakes don’t stop the car fast enough. The entire car just slides around on the road. It’s frightening and dangerous.

Snow tires may be useful in this situation, especially of the studless variety.

For the everyday Joe, the average commuter, all-weather tires are going to suffice if you live in a place where it snows just a bit every year. They’ll get you through the rain and the fallen leaves all the same.

The big options, studless snow tires, studded snow tires, and snow chains, are reserved for more serious drivers who would routinely be driving on compacted snow or layers of ice. This could include people who live in rural winter wonderlands or police officers.

Some states do not allow snow chains or studded tires because of the damage they do to the road. Illinois is one such state, so think twice about getting studied tires if you live in this state.

Winter tires, some mechanics feel, are never a bad idea. However, you should not use them all year round. They don’t belong on the road in the dry summer.

Additionally, studless tires often test as well, or better than, studded tires for winter driving. Studded tires may have a metal death grip on ice, but that translates to a dangerous and noisy ride on any other surface.

If consumers are worried about which tire to choose, they should look more at dependability and price. Most of the tires will do just fine in doing what they are designed to do, drive through winter weather.

Many people don’t understand that the tires don’t work the same way when the weather dips below 39 degrees Fahrenheit. All anybody needs to do is research videos of cars slipping and sliding all over Chicago’s expressways to understand that fact.

If you live on a mountain covered in snow, you probably already know a thing or two about snow tires.

People install snow tires to combat the dangerous conditions present in the winter (snow, sleet, etc.). These problems occur when the weather dips below 39 degrees Fahrenheit.

Take a look at your tires – what is the mud and snow rating (M+S)? Such tires are marked for better performance in slippery situations, but the term is general. It isn’t an all-access pass to snow globe driving.

The grooves on snow tires will be wide so that snow and the tires remain in close contact. As the tire spins, the snow flies out of the grooves, giving way to the next round of action.

You may hear people talk about getting snow tires “siped.” This isn’t usually necessary as tires designed for the snow don’t require the technique.

Some people rave about buying used tires. Think long and hard before going this route.

Be sure the tires are the right size. Check the depth of the tread on the tires using a gauge.

Look for signs of unevenness in the tire. These tires do not usually wear out evenly. You will put them on your car and feel like the tires are slapping the road every time that bare spot hits the pavement. That doesn’t save money and could cause other problems down the line!

Don’t think you can get away with two winter tires either. You can’t control the car very well with only two snow tires.

You should go with studless snow tires if you will be spending time driving packed snow. They offer great traction.

Studded tires offer even better traction, some believe, but they are not permitted in many places. They also have to be put on for the special occasion. For example, studded tires may not make sense in Chicago. They are illegal in Illinois, for one. Secondly, there aren’t that many days with snow in the road.

When it comes to tires, most Chicagoans should stick to all-season tires that will get them through both winter and summer. They just have to be more cautious to avoid driving on very icy or snowy days.

It can be a headache to call into work because of the snow. Then again, is changing your tires for a snowstorm that lasts one or two days really worth it? For most people, it is not.

In Colorado, Montana, or Alaska – yes. In rural Illinois, maybe. In Chicago? Probably not!

Can These Tires be Used All Year?

Using studless snow tires in the summer is like wearing your winter boots in the middle of July. Sure, you could, but why would you?

Studless snow tires are for the winter. They are not designed for long road trips in warm temperatures. They might be able to get you from point A to point B, but you will be wearing down your snow tires in the process.

Because of how they are designed, studless snow tires will lose tread even faster than regular tires would during the warm and dry months.

No, you shouldn’t use studless snow tires all year. Find a place to keep those tires until winter rears its ugly head once again!

Sometimes car care gets left on the backburner when we are feeling busy, overwhelmed, or even lazy. We cannot continue to put off oil changes and changing our tires for the seasons. If we do, we’re not taking care of the major investment that is a car.

If you’re at home saying that you would never pay for snow tires for your old car, then maybe it’s time to rethink your driving situation. If your car isn’t worth this kind of investment, perhaps it’s actually ready for the junkyard.

…Maybe you should call a junkyard, have your old car towed away, receive cash money for the transaction, and buy a newer car that is winter ready. How great does that sound?

You could be talking to a car salesman about studless snow tires right now, instead of wondering if you should slap them on your old beater just to be safe!

Winter tires, including studless snow tires, last five seasons on average, give or take a season based on mileage and exposure.

If you drive on these tires year-round, that’s a whole other story. The tires will not last that long.

Who Buys These Types Of Tires?

Who is buying studless snow tires?

Floridians and Alabamans probably are not buying studless snow tires. The drivers in Michigan, Iowa, Wisconsin, and Illinois might be, though!

Studless snow tires are for drivers who regularly drive on compacted snow, icy roads, and the like. They aren’t for regular grocery store trips on a slushy Saturday afternoon. They are for the police to drive safely in the middle of a mid-west blizzard.

They are also often used by people live in a rural area, otherwise known as “the middle of nowhere.” In such parts, a road maybe left unplowed. Everybody simply has snow tires, snow chains, a snowmobile or a horse. If not, they cross country ski, walk with snowshoes, or just stay home drinking hot cocoa.

To learn more about studless snow tires, and which might be right for your car or situation, you should do your research on the Internet. You can read reviews about which tires have been put on certain vehicles. You might also talk to your regular mechanic.

That being said, if you do know you want studless snow tires, take their advice. They are the experts after all.

The Final Say on These Types Of Tires

Studless snow tires aren’t going to be the saving grace of driving in any winter weather condition. However, they provide an option that is affordable and does less damage to the road.

They also will help the everyday driver cut through snow and slush thanks to a different breed of tire technology. Most notably, the wide grooves allow the tire to make consistent contact with the surface of the snowy or icy road.

Perhaps in Chicago, where snow tires don’t make that much sense most of the time, studless snow tires might be a viable option.

In other locales, where the roads are truly ice and snow, like in Norway or Sweden, studded snow tires and tire chains are a real lifesaver.

Maybe on those few blustery blizzard days each winter brings, you can be the hero who arrives in style with your studless snow tires.