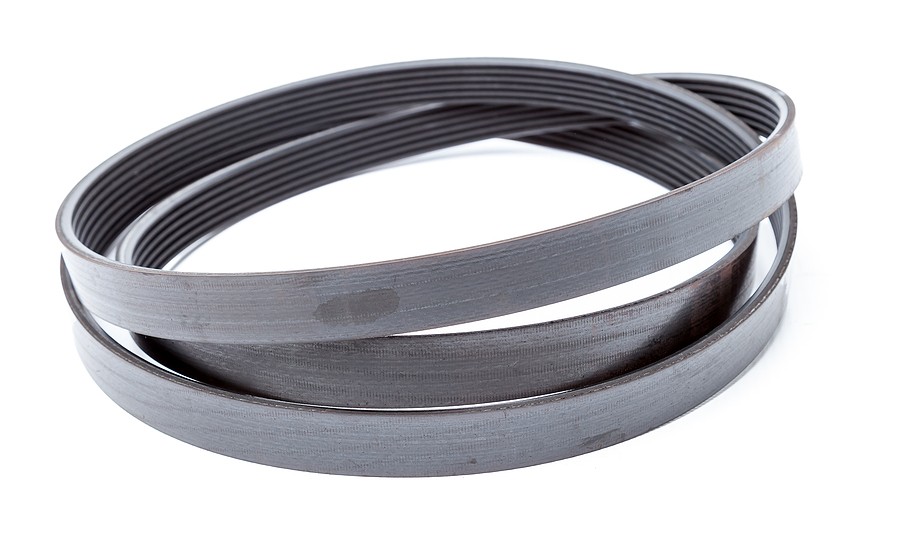 What is a Serpentine Belt?

The serpentine belt is connected to the crankshaft which is where it gets its power from. As the combustion reaction in your engine engages, the explosion created by the ignition of the fuel and air mixture forces the pistons down in the cylinder. This is what makes the crankshaft rotate and that in turn causes the serpentine belt to rotate by transferring its powers to all of the other peripheral components that it is attached to.

Because your serpentine belt is connected to so many components if she has to weave through quite a bit of the engine compartment. That's why it's called a serpentine belt as it snakes through all of these different peripheral parts.

As your crankshaft rotates the pistons rise in the cylinders of your engine. The camshaft is connected by the timing belt to allow the valves to open in the precise sequence so that the pistons will continue through the cylinder allowing the combustion reaction to occur and force the pistons back down again. If the timing of this goes off, then the valves may not open at the right time causing the pistons to crash into them. This can cause some serious engine damage, potentially destroying your engine out right.

If your timing belt begins to wear out you're also going to experience issues with poor performance because the combustion reaction will not be occurring at the exact right moment that it should be, you may end up with misfires or fuel mixtures that burn too lean or too rich as a result.

Some vehicles use a timing chain rather than a timing belt that performs the same function. While the timing belt is a rubber composite belt that's usually infused with nylon threads or metal or something that makes it more durable, a timing chain is not unlike a bicycle chain and made from metal.

How Long Does a Serpentine Belt Last?

If your serpentine belt starts to go bad there are some signs that will alert you to this fact so you can hopefully get to a mechanic and get it repaired before it fails completely on you. Because the serpentine belt is connected to so many peripheral parts, those are often the things that will alert you to the fact that something is wrong. For instance, if your air conditioner isn't functioning it's possible that the serpentine belt is responsible for it since the air conditioner compressor needs the belt to function. If you turn the AC on and no air blows out at all, the serpentine belt could be the culprit.  The same can be said if your power steering fails which you'll notice because moving the steering wheel becomes more difficult.

Squealing sounds are a big indicator that your belt is failing. As the belt rotates and it starts to slip or gets misaligned it will start making a high pitched and very annoying squealing noise.  You could also be on the lookout for your engine overheating which can be a result of the water pump not working properly because the serpentine belt is powering it, and you can even do a visual inspection of the belt. If you're noticing cracks in the rubber of the belt, then it's a clear indication that your serpentine belt has gotten too old and will need to be replaced because it will likely break soon.

How Long Does a Timing Belt Last?

Timing belts have different lifespans depending on the make, model, and year of the vehicle that you're driving. If you check your owner's manual it will let you know for sure exactly how long your timing belt is expected to last. That said, a good rule of thumb is that timing belts tend to last between 60,000 miles and 105,000 miles. You should give them an inspection every 30,000 miles just to see how they're doing and make sure none of the teeth are wearing off or that the belt is stretching out to be coming loose.

If you have a timing chain in your car as opposed to a timing belt, then there's no schedule of maintenance for that because they're meant to last an exceptionally long time. You should expect to have a timing chain last the lifespan of your engine. That said, what a manufacturer means by the lifespan of your engine may not be what you think it is. That timing chain typically will last you at least 200,000 miles to 250,000 miles and possibly much longer. In fact, there have been cases where timing belts have lasted as long as 200,000 miles, so a timing chain could potentially have a remarkable life span. That said you never want to push your luck because the manufacturer will not guarantee that a timing chain can last that long.

How Much Does a Serpentine Belt Cost?

You can buy yourself a new serpentine belt on AutoZone for between $20 and $50 on average. They are fairly affordable as parts for your vehicle go. Replacing a serpentine belt in your engine is not usually a very labor-intensive job so the cost of getting your serpentine belt replaced by a mechanic is probably going to be between $100 and $200 on average. Of course, this depends on the make, model, and year of your vehicle and where you take it to get it repaired. A dealership is going to charge me more than a mechanic will for this job.

There's always the option of doing a DIY serpentine belt repair yourself to save the cost of labor. Replacing a serpentine belt in your engine is not too difficult a repair job. If you're comfortable working on your car at all, you should be able to handle a job like this without too much difficulty. If you've never done it before you can check out a video like this one that can walk you through the process of replacing the belt pretty easily.

The process of replacing your serpentine belt is pretty straightforward, however. if you're just getting into DIY car repairs this is actually a good one to get started with so you can bolster your confidence and skill level when it comes to working under the hood.

How Much Does a Timing Belt Cost?

On AutoZone a new timing belt is generally going to cost you between $100 and $300 just for the part itself. Already you are in excess of what it's going to cost you to not just buy a new serpentine belt but get it replaced. When you buy them this way it's actually an entire kit that includes the tensioner and pulley that is needed to operate the timing belt as well as the water pump. Water pumps are almost always replaced alongside timing belt's because they're located next to each other in the engine and since it's so difficult to get access to either one of them it makes sense to replace both of them at the same time to save yourself time and money down the road doing essentially the same job all over again.

If your mechanic recommends swapping out to your water pump when you get a tiny bit changed you don't need to worry that they're trying to charge you for work that doesn't need to be done. This is very commonplace, and it is recommended that you do get both done at the same time since they have essentially the same lifespan.

Like we said, replacing the timing belt in your car is a complicated repair job. While the serpentine belt replacement is a beginner level repair, replacing the timing belt would qualify as an advanced repair job and something you definitely don't want to do if you don't have a lot of experience working on cars. If you are confident that you can get it done then the best thing to do is, once again, take a look at it to see what kind of videos are made by skilled mechanics so they can walk you through the process. Luckily there are plenty of mechanics who have YouTube channels that can show you a step-by-step process for getting this job done which really takes a lot of the guesswork out of it and makes it so that even newbies to the world of auto repair can do jobs that not even 20 years ago would have been completely unthinkable for the average home mechanic.

Knowing the difference between a serpentine belt and a timing belt is important if you want to fully understand exactly how your engine works. When you're discussing the various parts of your engine  or when a mechanic is talking to you about it it's good to understand exactly what each of these belts does and why they are important to the overall functioning of your vehicle. Knowing the difference between the two makes you that much more informed and able to understand how to diagnose a problem when it arises and what you can expect the mechanic to do in order to fix them.