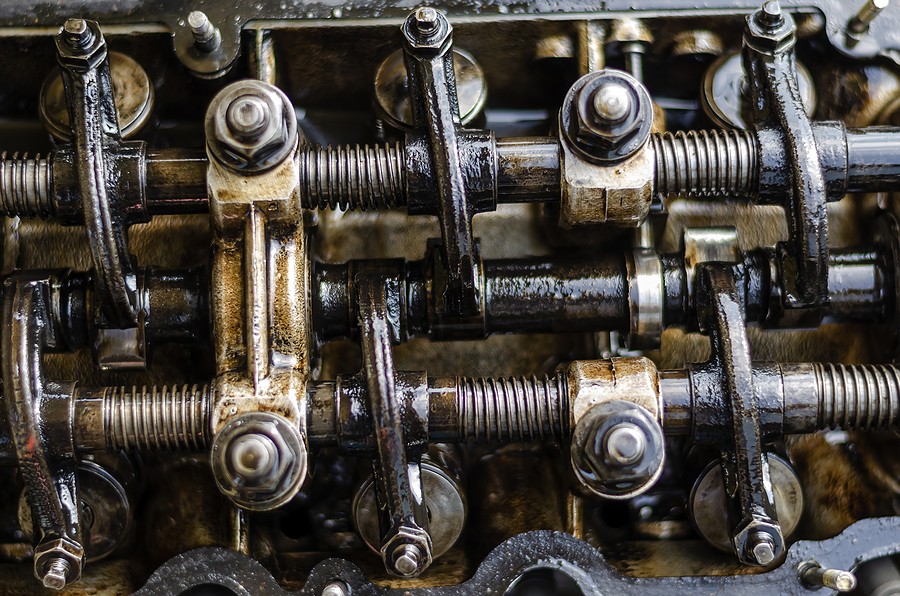 What is a rocker arm?

A rocker arm refers to a part in your vehicle’s internal combustion engine, helping it run efficiently and safely. This moving lever transfers the radial movement from the cam lobe into a linear movement that can be used to power the car. The cam lobe is a rotating piece in the linkage chain within the engine that transfers rotary into linear motion, delivering power to propel the engine.

As you will find in this article, a rocker arm plays an important role in the main function of your engine, helping keep the pressure at the correct level and aiding in the timing of the ignition to prevent engine misfiring and overheating.

One end of the rocker arm is moved both up and down by the rotating camshaft lobe, directly by the camshaft or by the tappet. The tapper is a lifter that conveys the rotating motion into linear motion, helping the transmit energy between side-to-side and forward progress.

The other end of the rocker arm that is not being moved up and down acts as the valve stem, which opens to let gas into the chamber and then closes to keep the gas in the chamber, altering the chamber’s pressure to keep it at the right level. The valve stem keeps the right air and fuel mixture within the engine, allowing for proper timing of ignition and combustion.

When the camshaft lobe raises the arm, the inside of the arm presses on the valve stem to open the valve at the correct time to allow pressure and gas either inside or outside of the system. The gas regulation means that the rocker arm functions to keep the internal combustion engine levels at the right pressures, preventing premature combustion.

Some engines use shorter rocker arms for their internal process, where the cam lobe pushes down on the rocker arm to open the valve. On this type of arm, the pivot point is at the end of the rocker arm, making this kind of arm common on dual cam motors.

The rocker arm’s leverage, which relates to the force placed on other internal engine parts, is controlled by the rocker arm’s ratio. The rocker arm ratio determines the distances from the center of the arm to the rotation point, which is where the camshaft pushes on the arm. The ideal ratio for most rocker arms to function at the optimal level is between 1.5 to 1 or 1.8 to 1.

Symptoms of a Faulty Rocker Arm

Although rocker arms are not considered as important as other parts of the internal combustion engine’s system, they still perform a vital function in your car. Without the rocker arm, you would not be able to run your car properly, as a damaged arm can lead to a less than optimal engine performance or engine failure if you let a damaged rocker arm go on for too long without fixing.

To figure out if you have a damaged rocker arm that is negatively affecting your engine, you have to keep an eye and ear out for the most common symptoms of damage. Although the rocker arm might be working alone to damage your engine, other defective parts are exacerbating the issue.

Loud and unusual noises that come from the internal combustion section of your engine, like a fast clicking sound, can refer to a damaged rocker arm and the surrounding parts. Damaged rocker arms can become stuck during rotation, causing a clicking noise. However, other parts can cause clicking in the engine, so you should bring your car to a mechanic to determine if the issue’s root cause is a rocker arm or another component.

If you feel like your engine is not accelerating as quickly as it normally does, does not contain the same horsepower, does not have the power to go up hills or pass other cars, and is lagging behind, then this could be a sign of a faulty rocker arm. The reduced engine efficiency is due to a faulty rocker arm preventing proper timing of the opening and closing of the valve, leading to the engine stalling if the issue is not taken care of.

In addition to your vehicle being able to recognize a lack of acceleration and clicking noises in your car, it can also recognize weak engine performance and alert the driver by turning on the check engine light. Even though this light can sometimes turn on for minimal reasons, it can also alert the driver to a serious condition that needs immediate fixing.

Specific rocker arm codes that can be scanned using a diagnostic tool and can be seen by the check engine light turning on are P2646, P2647, and P2662, all of which relate to the rocker arm actuator system, rocker arm pressure switch, or the rocker arm system stuck on bank 2.

One of the most noticeable signs by either you or a mechanic that the rocker arms have become damaged due to consistent use is that there are cracks, holes, or clear signs of wear and tear on the arm. After you or an auto body worker remove the valve cover, look for metal-on-metal contact or debris that has built up on the pivot point or in the valves, harming the rocker arm function.

Similar to the weak engine performance and the engine deterioration, if you find that your engine is frequent stalling when you are trying to start your car, accelerate, or drive at high speeds, this is a common sign that you have let a bad rocker arm go on for too long without any fixes.

The engine might stall frequently during use until it completely fails, leaving you unable to drive your car or start the vehicle.

After you have noticed a damaged rocker arm’s symptoms, the next step is to either repair the rocker arm or look up where to go to get a rocker arm replacement. A single rocker arm will run you between $15 and $60 at a local shop, although it depends on your kind of vehicle and the repair’s specific model.

Rocker arm kits, which are much more expensive and range in the hundreds of dollar range, include other components that aid in the rocker arm function, like engine plates and pushrods. If you feel like you can replace a rocker arm yourself, purchasing a rocker arm kit will reduce the labor costs and keep the total rocker arm replacement cost much lower than if you were to go to a nearby shop.

Suppose you notice any symptoms of a damaged rocker arm. In that case, you should look to replace both arms, since you will save by combining the labor into one fix, and oftentimes, replacing all rocker arms will prevent imminent failure of the other arm.

The cost to replace just one rocker arm generally ranges between $500 and $1,000 if a repair cannot fix the issue. In most cases, with this fix, you will have to replace multiple arms since they all tend to go bad or fail at similar times in your car. Even if one has not failed, replacing all of them can prevent premature rocker failure in the other arms.

If something gets stuck in the valve and prevents it from closing, this can severely hurt your engine performance. The most common causes of r this happening are:

If you use poor fuel or the incorrect type of fuel for your car, this can hurt your rocker arm and cause the valve to remain in the open position. Poor fuel can be caused by a dirty fuel injector, which can be seen by the engine misfiring, the rough engine idling, the gas mileage decreasing, the RPM needle fluctuating during use, and your car not being able to start.

The oil that has been contaminated or contains too much dirt can prevent a seamless oil flow and lead to a damaged rocker arm. Many signs of dirty engine oil can alert you to this problem before it hurts your engine. Some signs of dirty engine oil are that your dipstick shows an improper color of oil, you hear engine knocking or loud sounds coming from your engine, there are oil smells within the cabin, or you notice a smoky and black exhaust.

Another reason for your rocker arm failing and causing a valve to remain open is a bent valve. A bent valve can be caused by a few key problems, like your engine over-revving, your engine not being repaired at the right intervals,s and issues during an engine rebuild.

If your engine over-revs, the RPM limit will exceed what is normal and safe within the car. The valves can stretch and rub against pistons, leading to overheating excess friction, and piston damage. In addition, if you do not perform regular engine maintenance, your engine will lack lubrication, leading to the valve guides to stick and rub against the pistons.

Lastly, during an engine rebuild, there might not be enough space left between the piston and valves to ensure the valves are aligned with the intake and exhaust valves. In this case, the bent valve will cause rocker arm damage and lead to reduced engine performance.

Although the rocker arm is often overlooked as an important part of the engine system, it provides a pivotal connection between internal components that lead to a high-performance level, proper acceleration, and engine longevity. If you hear or see any of the common rocker arm symptoms, you should take note and get your car inspected as soon as possible by a trusted mechanic.

Symptoms of a faulty or damaged rocker arm in your car include your engine misfiring, the check engine light turning on in your car, a lack of engine performance, visible physical damage, and clicking noises that seem to get louder during consistent use of your engine or when excessive stress is placed on your engine.

There are certain causes you need to look out for and prevent regarding  damage and a faulty rocker arm. If you are putting the wrong type of fuel in your vehicle, this can lead to a damaged rocker arm. If you have debris in your oil and have not had an oil change in the recommended time interval, this can substantially damage your rocker arm. In addition, a bent valve or a dislodged valve seat can cause the rocker arm to become worn-down quicker than usual.