How Much Do Radiator Hoses Cost? 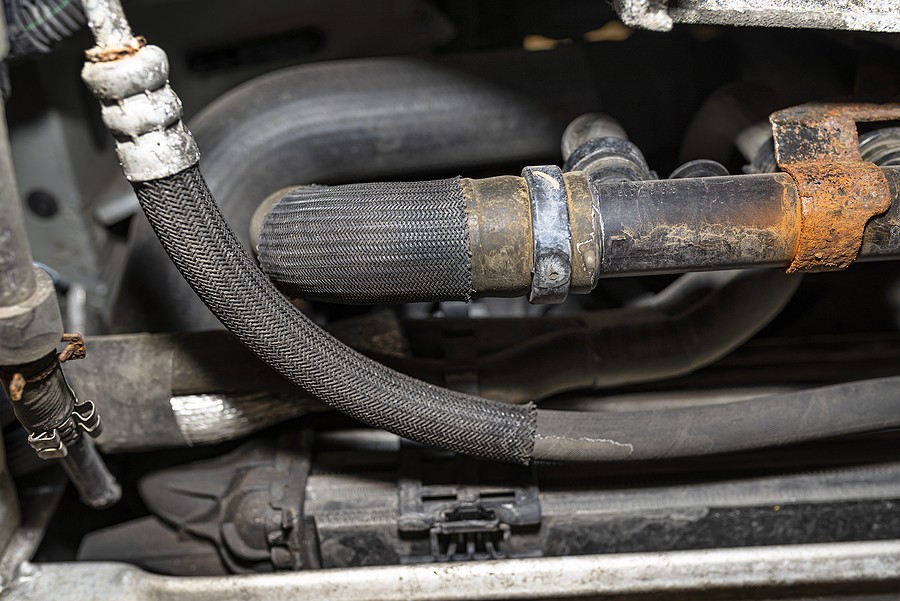 As you can probably imagine, the area underneath your car’s hood can get to be very hot when your car is up and running. The engine in your car is capable of producing quite a bit of heat, which is why it’s so important for you to have a fully functioning radiator in your car to go along with it. It’s also why it’s so important for the radiator hoses that are attached to your radiator to do their jobs. If they ever give out on you, you’ll need to ask, “How much do radiator hoses cost?”, and have new ones installed.

Let’s learn more about the importance of your car’s radiator hoses and discuss what steps you should take if they ever stop working the way they’re supposed to.

What Are Radiator Hoses?

In a few minutes, we’re going to talk at length about replacing radiator hoses and touch on how much radiator hoses cost to replace. But before we do that, you should be familiar with what radiator hoses are and know how they help your car to steer clear of overheating.

As we mentioned a second ago, your car has a radiator in it that is set up to cool off your car once your engine gets going. The radiator is equipped with a thermostat that keeps a very close eye on how hot it gets underneath your hood. If the temperature creeps up too high, your radiator will spring into action and release engine coolant—also sometimes called antifreeze—that will travel towards your engine, run through it, and cool it off. Your radiator hoses are responsible for carrying the coolant back and forth between your radiator and your engine.

How Long Do Radiator Hoses Last?

There isn’t really a hard and fast rule regarding how long radiator hoses will last. But generally speaking, you can expect to get about five years—or around 60,000 miles—out of one before it goes bad on you. You might be able to squeeze a little more life out of radiator hoses by taking good care of your car and changing your engine coolant on a regular basis. But even then, you might not get more than a few years out of them before you’ll need to speak with a mechanic about how much radiator hoses cost to replace.

How Do I Know If My Radiator Hose Is Bad?

In a perfect world, you should inspect your car’s radiator hoses every so often or have a mechanic do it so that you’re able to replace them prior to them conking out on you. But of course, not everyone is able to do that or remembers to get around to it. It’s why a large number of people see their radiator hoses go bad on them every year.

If you spot any of these signs, you’re going to want to make an appointment to have your radiator hoses replaced right away. You could have even bigger problems on your hands if you don’t act quickly.

Can I Drive Around With a Bad Radiator Hose?

You really shouldn’t drive your car around if it’s experiencing any issues at all. But you should be especially mindful about not driving it when you suspect that there might be trouble with your radiator hoses. You could do way more damage to your car than has already been done. You could even end up with a car that needs to be scrapped altogether.

If you decide not to learn how much radiator hoses cost and replace them, you could burn up your engine. Your car is going to overheat on you in no time at all, and when that happens, there is a decent chance that a fire could break out at any second. At that point, your car is going to be worthless in most cases, even if it’s on the newer side. It’s why it’s so important to have radiator hoses replaced when they’re no good anymore.

How Much Do Radiator Hoses Cost?

Since radiator hoses play such an important role in your car’s overall well-being, you might be under the impression that they’re going to cost a small fortune to replace. But this couldn’t be any further from the truth! Although radiator hoses are an essential part of your car, they’re going to run you a lot less than a lot of the other parts that are under your head.

How much do radiator hoses cost? It obviously all depends on what type of car you drive, where you live, and which mechanic you trust to replace radiator hoses for you. But on average, people usually pay somewhere between $150 and $175 as far as radiator hoses cost is concerned. That includes parts, which will run you about $75, and labor, which could cost upwards of $100 before everything is all said and done.

We realize that $150 to $175 is a lot of money for some people. But in the grand scheme of things, replacing radiator hoses is one of the more cost-effective auto repair jobs out there. It sure beats the alternative, which could include replacing a radiator for between $300 and $1,200 or, worse, replacing an engine for about $5,000.

How Long Does It Take to Replace a Radiator Hose?

To replace radiator hoses, a mechanic will need new radiator hoses, new engine coolant, distilled water, a screwdriver, and a utility knife. Here are the steps they’ll take to get your old radiator hoses off so that they can make room for your new one:

That’s pretty much all there is to it. In right around 15 minutes, you can have new radiator hoses installed in your car and not have to worry about them for another 60,000 miles.

Can I Replace My Radiator Hose Myself?

Because replacing radiator hoses seems so easy, some people think it might be a good idea for them to tackle the job themselves. Unless you have at least some experience working on cars, you should not attempt to take this auto repair on yourself.

A good mechanic will pick out the right radiator hoses for your car and use the best engine coolant in it. They’ll also ensure that your new radiator hoses are secured and do all of this while keeping your radiator hoses cost low. It makes hiring them well worth it. If you decide to take on the job on your own, it could lead to you inadvertently doing damage to your car and costing yourself a nice chunk of change later on.

What Happens If I Don’t Fix a Bad Radiator Hose?

We spoke briefly about this a little while ago, but it’s worth repeating it again. You should not, under any circumstances, attempt to drive around in a car that has bad radiator hoses. If you do, you’re going to put your entire car at risk, and in some situations, you might even put your life and the lives of others at risk.

It’s also worth noting that many of the signs of bad radiator hoses are also the signs of a bad radiator or even a bad engine. If you ignore those signs and hope they go away on their own, you’ll find yourself in a tough spot later on. It’s much better to have your car checked out by a mechanic to see what the problem with it seems to be.

Can I Sell My Car If It Has Bad Radiator Hoses?

If your car isn’t worth much and it has bad radiator hoses in it, the radiator hoses cost might make you think twice about replacing them. Or if you have a car that’s not worth much that has radiator issues, you might not want to take on the costs associated with fixing it. Either way, you should know that you’ll have the option of selling a car with radiator problems.

There are junk car buyers like Cash Cars Buyer that will take your old car off your hands, regardless of whatever issues it might have. If your car has bad radiator hoses, a bad radiator, or even a bad engine, we’ll still pay you top dollar for it. Just let us know some basic information about your car and we’ll help you escape the radiator hoses cost by purchasing your car from you for cash. Reach out to us today to obtain an offer for your car.

PrevPreviousCash For Junk Cars Evans, GA Hassle-Free Pickup
NextP0011 code – What Does It Mean For My Car?Next