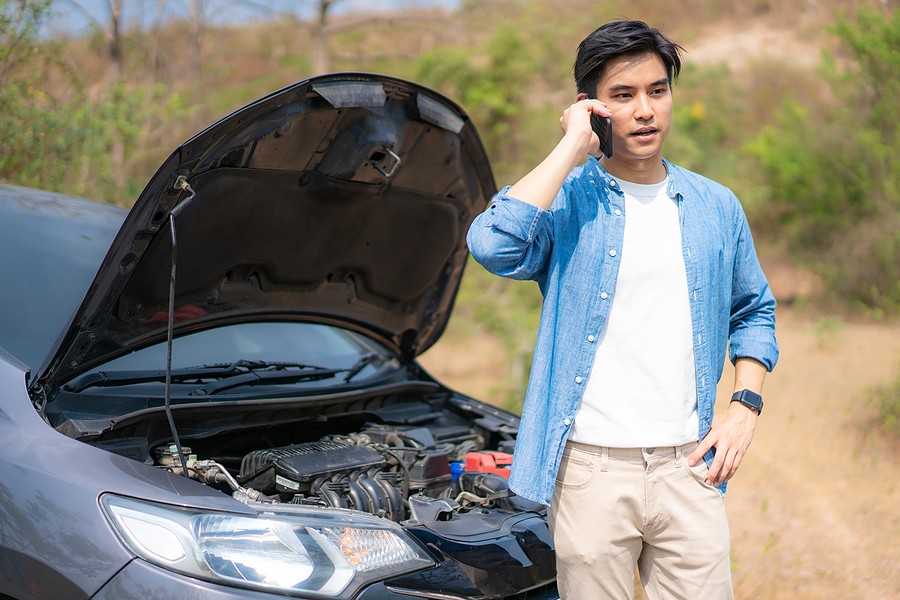 A PCV valve is a positive crankcase ventilation valve. It’s part of the car's ventilation and exhaust system that prevents some of the pollutants created during the combustion reaction in your engine from being released as harmful emissions in the exhaust. It's also useful in keeping your engine oil clean and lowering the pressure in your crankcase. If you have a problem with your PCV valve and you need to get it replaced it's a fairly affordable job, as compared to many engine repairs that you can conduct, and will typically cost you between $60 and $90.

Even though a PCV valve repair is a relatively cheap job and the part itself is a very small item, it's also very important to the functioning of your engine. The effect that a bad PCV valve will have on not just your car, but the environment means you definitely want to keep this well maintained properly functioning.

If you want to save yourself some money you could also buy a PCV valve on your own and do the repair at home rather than taking it to a mechanic. Remember, a lot of the fees that you are paying when it comes to getting a job like this done at a mechanic is for the labor rather than the parts involved. In fact, a PCV valve is one of the cheapest items that you can buy for your vehicle. When you go to Autozone.com and do a search for PCV valves you'll discover that some of them are remarkably inexpensive. For instance, there are some aftermarket PCV valves that cost around $2. At the high end of the scale a PCV valve will cost you about $40. So clearly you can save some cash if you are willing to get the job done yourself. Why pay $90 for a job that's only going to cost you $2 to do yourself, right?

What are the Symptoms of a Bad PCV Valve?

When a PCV valve goes bad there are a number of signs and symptoms you can be on the lookout for to help you diagnose the problem. If you experience any of these, especially if you're experiencing more than one, then there's a good chance the PCV valve is where you should be looking to get it fixed.

There are a number of different conditions under your hood that can lead to a rough idle but a bad PCV valve is definitely one of them. Rough idling is best defined as a kind of shaking or vibration when your engine is running but you're not driving. And also, a sound louder than normal. This happens when the plunger inside the PCV valve is stuck in the open position not allowing too much air to enter your engine. That causes the fuel and air mixture to be too lean, which is to say there's less gasoline and more air than is required for a proper reaction. This will throw off the temperature of your combustion reaction and also can potentially lead to your engine stalling as well as the rough idling issue.

When the PCV valve isn't working the way it's supposed to, something called blow-by from the exhaust can end up mixing with your engine oil. Blow-by is filled with various pollutants that will mix with the oil and turn it into a sludgy mixture that builds up around your engine. When this gets bad enough it can even lead to fires. If you're seeing a black, oily, sludgy build up at any part of your engine, not only will it need to be cleaned up, but you want to look at your PCV valve as the potential cause.

If your PCV valve is clogged or it's stuck in the closed position, then the pressure in your crankcase is not being properly maintained. That pressure will cause gaskets and seals around hoses to start leaking and oil will escape. Oil can end up leaking out of the bottom of your engine as well as into things like the air cleaner assembly and elsewhere. That means you run the risk of your engine overheating because the oil isn't present where it needs to be as well as the oil causing damage to other components. And, the same with the issue of creating sludge, you're running the risk of a fire if things overheat when they're covered in oil.

If your PCV valve gets stuck in the closed position or it gets clogged so that it can't function properly anymore then you may end up having a rich fuel mixture being burned. This is the opposite of the lean fuel mixture problem.  In this case, you're experiencing too much gasoline compared to the amount of air that's being burned. When that happens, you'll burn through gas faster than normal, but you won't get any extra performance out of it. In fact, your car will perform worse than normal but you'll be burning more gas, which means heading to the pumps more often, which means spending more money for worse mileage.

When the valve is stuck in the open position, then you are having that problem with your fuel and air mixture being too lean. In this case, when you're not burning enough gasoline, you end up experiencing an underperforming engine. It will be hard to get up to speed, and you won't be able to maintain the same kinds of speeds that you're used to. This could also end up causing issues like backfiring. This particular problem can be dangerous when you're out on the road as you'll be expecting to reach and maintain normal speeds but will find yourself unable to do so. If you're on the highway and the flow of traffic is very fast, your inability to keep up could be dangerous.

Every driver gets frustrated when they see a check engine light pop up on the dashboard because it's very hard to figure out what exactly the check engine light means. We could run through a list of literally hundreds of different causes for this light to come on, and since it doesn't give you any indication what it means it's often not very helpful. Many drivers will tend to ignore that check engine light since you can often continue driving your vehicle once it comes on without noticing any problems whatsoever.

In this case, you will likely be experiencing some of the other symptoms that can help you narrow down the PCV valve as the cause of the check engine light coming on. If you want some further confirmation you may be interested in getting your own OBD2 scanner to help you figure it out.

An OBD2 scanner is the tool that a mechanical used to diagnose these warning lights when they pop up on your dashboard. It's that small, usually yellow handheld computer device that gets plugged into your car and will diagnose issues for a mechanic. While some of these can cost hundreds of dollars, you can get a fairly simple one on a site like amazon.com for only $30 or $40. If you have any interest in diagnosing problems in your car and doing some home auto repairs, this is a good investment for you to make. If nothing else, it could narrow down the reason a check engine light came on by giving you a corresponding error code.

When you use an OBD2 scanner and there's a problem with your PCV valve you're going to get one of two codes that come up: P0171 or P0174. These both relate to a problem with a bad PCV valve. But something else pops up, then you have a different problem.

How Often Should a PCV Valve be Replaced?

Changing your PCV valve is a part of a vehicle's routine maintenance schedule. You should check your owner's manual to be certain when the manufacturer recommends having the valves changed, but in general you'll want to get this done around 30,000 miles or so.

Can I Replace my Own PCV Valve?

If you want to save yourself some money you can definitely replace the PCV valve on your own. As we said, if you want to buy one on your own you can get them remarkably cheaply. You may not want to use that $2 house unless you know for sure it's a good quality, but even the most expensive PCV valve is going to be only about $40 when you buy it on AutoZone, so you're not losing a ton of money on this prospect.

You need to ensure that you have the exact right PCV valve to fit your vehicle because, as with most Parts, if you have the wrong valve it won't fit precisely right in your vehicle. Once you're sure you have the right one this is a fairly routine repair job and if you're comfortable doing basic auto repairs you should be able to handle this work as well.

If you've never replaced the PCV valve before there are many handy videos that you can find on YouTube that can guide you through the process of exactly how to get it done. Luckily for DIY mechanics these days a number of professional mechanics maintain very high-quality YouTube channels that can walk you through hundreds of different repairs in clear and concise detail. It really makes getting this kind of worked out at home so much easier, which can save everyone a lot of money in the long run.

PCV valves are very small pieces of technology and often overlooked by many drivers. If you're not super familiar with the inner workings of a car you may have never even heard of a PCV valve before. But considering the overall impact a PCV valve can have on your vehicle and the Damage it can cause if yours isn't working properly, it's good to know not just where it is, but what it does and how to fix it when something has gone wrong.

When you look at the price difference between what a PCV valve cost that just a couple of dollars and the cost of getting it repaired which can be around $100 at a mechanic or a dealership, then this is one of the best places that you can begin if you're interested in getting familiar with Home Auto Repair but you don't have a lot of experience doing it. The overall job here is simple and the parts involved are cheap enough that even if something were to somehow go wrong it wouldn't be that big of a problem to get another one and try to fix a second time.

As cheap as a PCV valve is, you should never underestimate its importance. This is one of those few devices that not only has an impact on how your vehicle works for you, but how it works for everyone else as well. Since a PCV valve is responsible for filtering out pollutants it's actually helping release the gases from staying in your engine block in into the intake manifold where they blow back into the combustion cylinder to get burnt again, less preventing pollution that affects everyone in the world including the environment. Remember that there are over 1.4 billion cars on the road today, so if PCV valve is doing its part to help prevent the pollution in every single one of those vehicles that could really build up and cause some serious problems for all of us if they weren't in place. For that reason, when you noticed there's a problem with yours, you want to get it fixed as soon as you can.